Health Insurance Reforms: How Will They Affect Employment-Based Coverage in California?

The objectives of this issue brief are: (1) to examine how insurance reforms required by the Affordable Care Act will affect benefit packages currently offered by California employers and (2) to estimate out-of-pocket expenses and actuarial values for households with employment-based health plans in California in 2010. We use simulated bill paying to estimate the percentage of the bill paid by the health plan (actuarial value) and via households’ out-of-pocket expenses. Data on employment-based health benefits are from the 2010 California Health Benefits Survey. MarketScan medical claims data provide the source of information on use and cost of services. Findings indicate that most 2010 and 2014 insurance reforms will not have major effects on current plans offered by California employers. Two exceptions are a prohibition on lifetime maximum benefits and a limit on the out-of-pocket expenses an employee may incur. The average actuarial value for an employment-based plan in California is 0.87 compared to 0.83 for the nation. Average out-of-pocket medical expenses for households with employment-based insurance are $1,298.

2010 and 2014 Health Insurance Reforms: How Will They Affect Employment-based Coverage in California?

Signed into law by President Obama in a White House ceremony on March 23, 2010, the Patient Protection and Affordable Care Act (ACA) contains many provisions that alter the requirements of employment-based health insurance. Employment-based insurance is the leading source of coverage nationwide for persons under age 65. In California, an estimated 17.7 million persons, or 54.2 percent of the under 65 population, obtain their coverage from an employer.1

The objectives of this issue brief are:

Our data source is the 2010 California HealthCare Foundation (CHCF) Employer Health Benefits Survey. This survey entails a random sample of 805 private firms with establishments in California in 2010. The survey is conducted through telephone interviews with employee benefit managers. A second database is the 2008 MarketScan medical claims data from Thomson Reuters. We take a sample of people from the MarketScan database and simulate the payment of medical claims under various plans to determine the percentage of payments made by each plan and the beneficiary for each employment-based plan. Our analysis shows the degree of financial protection offered by plans grouped into the various tiers defined in the ACA:

The first set of changes in insurance rules went into effect on the first day of the next plan year after September 23, 2010. Therefore, for most plans these rules became effective in 2011. The 2010 California HealthCare Foundation (CHCF) Employer Health Benefits Survey was conducted April through July of 2010, prior to the implementation of these provisions for any plans. These reforms expanded financial protections to Americans with group or individual health insurance and included:

Exchanges begin operations in 2014, and medical underwriting will be banned in the small group and individual markets. At the same time other insurance reforms will:

No data for California are available about the frequency of insurer rescissions, the application of pre-exist ing condition clauses to children, or how many adult children gained coverage on their parents’ plan. The CHCF Employer Benefits Survey does not ask about annual limits since such plans are not considered comprehensive plans by the survey sponsors. Here we present findings on preventive services and lifetime maximum benefits.

No Cost-Sharing for Designated Preventive Services

Ninety percent of insured workers in California in 2010 were members of a plan that provided preventive benefits without cost-sharing (Table 1, page 4). There was little variation in this figure by region of the state or by industry. Small firms–firms with fewer than 50 workers–covered preventive services without cost-sharing at a statistically lower rate (83 percent) than other firm size categories. A Ban on Lifetime Benefits

About 40 percent of workers receiving their coverage through a private employer were enrolled in a plan with lifetime maximum benefits in 2010 (Table 2, page 5). The vast majority (83 percent) of plans with maximum lifetime limits in 2010 had limits of $2,000,000 or more. Employees in firms with fewer than 50 workers were more likely to be subject to maximum lifetime benefits (46 percent) than employees in larger sized firms. By industry, workers in the firms outside the Los Angeles and San Francisco metropolitan areas were subject more often to lifetime limits (52 percent). Only 6 percent of employees with employment-based health insurance work for a firm where the waiting period exceeds the maximum of 90 days (Table 4, page 6). Among small firms (3-49 workers), 12 percent of employees work for a firm with waiting periods of more than 90 days. The retail/wholesale sectors have the largest percentage of workers (17 percent) employed by firms exceeding the 90-day requirements. Firms in the San Francisco metropolitan area are more likely than in other areas of the states to have no waiting period. The average actuarial value for an employment-based plan in California is 0.87 (Table 8, page 10), a figure that exceeds the national average by about four percentage points.3 The average actuarial for an HMO plan is 0.91 as opposed to 0.73 for a high-deductible health plan. With the majority of Californians enrolled in HMO plans, California plans have historically had higher actuarial values than the national average. Actuarial values varied little for the four industry groups or by geographic area. As employees incur greater overall medical expenses, a higher percentage of expenses are paid by the health plan, as opposed to the employee. Thus, for the lowest 50 percent of families incurring medical expenses, the plan pays for 73 percent of medical expenses. For the top one percent of spenders, the health plan pays for 97 percent of expenses.

HMO members sustain lower out-of-pocket expenses than other plans–$958 on average. This contrasts with $1,477 for a PPO plan and $2,778 for a consumer-driven health plan.4 Differences across the four industry groups and three geographic areas are small. 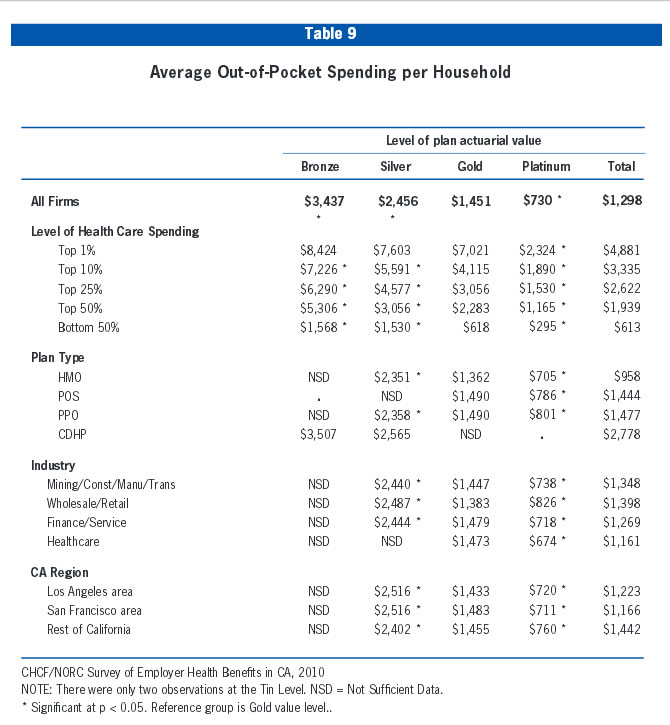 For four of the six ACA provisions analyzed in this brief, 90 percent or more of Californians receiving insurance through their employer are already enrolled in plans that satisfy the new standard. These four provisions are:

Two requirements will expand benefits for substantial numbers of insured workers. First, about 40 percent of Californians with job-based insurance were subject to lifetime limits in 2010. However, 83 percent of plans with maximum lifetime limits in 2010 had limits of $2,000,000 or more, so the impact of this change will be minimal on most employers but would be quite meaningful for the small number of employees who reach these limits. Second, 19 percent of employees covered in the small group market had out-of-pocket limits greater than $5,950 for single coverage, or $11,900 for a family.

Workforces from small firms are most likely to receive expanded benefits. In a state where the majority of insured workers are enrolled in an HMO plan, California employees have less cost-sharing and richer benefits compared to the rest of the nation.

The average actuarial value of a California plan of 0.87 is higher than the national average of 0.83. Expected family out-of-pocket expenses average $1,298. Hence, the impact on employers and employees will be less profound in the Golden State than in other areas of the country.

We thank Ken Jacobs and Laurel Lucia for their helpful comments, and Jenifer MacGillvary for her help in the preparation of this brief.

Black Employment and Unemployment in November 2011