Public Sector Impacts of the Great Recession and COVID-19

Part of the Labor Center’s Covid-19 Series: Resources, Data, and Analysis for California

The Great Recession that began December 2007 and ended in June 2009 preceded one of the weakest economic recoveries on record, with both wages and employment stagnating well into the following decade. The public sector in particular—local, state, and federal employment—failed to rebound to pre-recession levels for many years after the recession ended, and in some parts of the country was still below 2007 levels when the COVID-19 pandemic began.

In California, as in the United States as a whole, public sector employment has never recovered when accounting for population growth. Inadequate federal stimulus, significant state budget cuts, restrictions on local revenue options, and overall stagnation of employment and wages throughout the economy, all affected California’s economic recovery.

This persistence of public sector declines after the Great Recession should inform state and local policy responses to the job and revenue losses driven by COVID-19 in order to avoid a weak post-pandemic recovery. Although private sector employment grew strongly after 2009 (12% from peak to peak—December 2007 to February 2020; 18% from the February 2010 trough), economists have characterized the post-recession period as much weaker than previous recoveries. Wages stagnated, precarious (part-time and informal) employment ballooned, and the share of labor force participation lagged well behind previous eras, despite a historically low official unemployment rate. This weak recovery can be attributed to many factors, but the insufficient public sector recovery is an important one.

Despite experiencing the longest period of economic expansion in U.S. history from 2009 to 2019, the nation’s economic recovery from the Great Recession was one of the weakest on record. The Great Recession saw massive employment losses—8.7 million jobs were lost in the U.S. from December 2007 to February 2010, representing 6.2% of the country’s nonfarm employment. Nonfarm employment in the U.S. did not recover pre-recession levels until May 2014; private sector employment recovered in March 2014.

The recession was especially severe in California; California’s unemployment rate surpassed the national rate, peaking at 12.3% several months after the national peak of 10% (Figure 1). The depth of California’s downturn has been detailed by many researchers (see Center on Wage and Employment Dynamics briefs of 2010, 2012, 2016, and 2018).[1]

Although the Great Recession was followed by the longest period of economic expansion on record, that recovery is widely regarded to be incomplete, characterized by both widening inequality and very slow growth in real incomes. Several measures illustrate the incomplete national and state economic recovery:

The private sector and public sector followed different trajectories in the scale and timing of declines and recovery. Beginning in December 2007, private sector employment fell significantly nationwide, before rebounding in early June 2009 (California started losing jobs in July 2007, a few months earlier). State and local government employment declined more slowly, with losses accelerating in 2011 and 2012 as the economic impacts of the recession affected revenues. Federal employment spiked in 2010 due to hiring for the 2010 Census. Despite California’s stronger recovery in government employment, the state’s public sector is a significantly smaller part of the economy than before 2008. From 2007-2019, California’s population grew by more than nine percent—adding more than three million residents. In California, state and local governments employ about one in seven Californians (outside farming)—this share has dropped significantly since the 2007-09 recession, from a high of 15.5% in July 2009 to a low of 13.5% in July 2019, where it hovered until April 2020 (Figure 4). 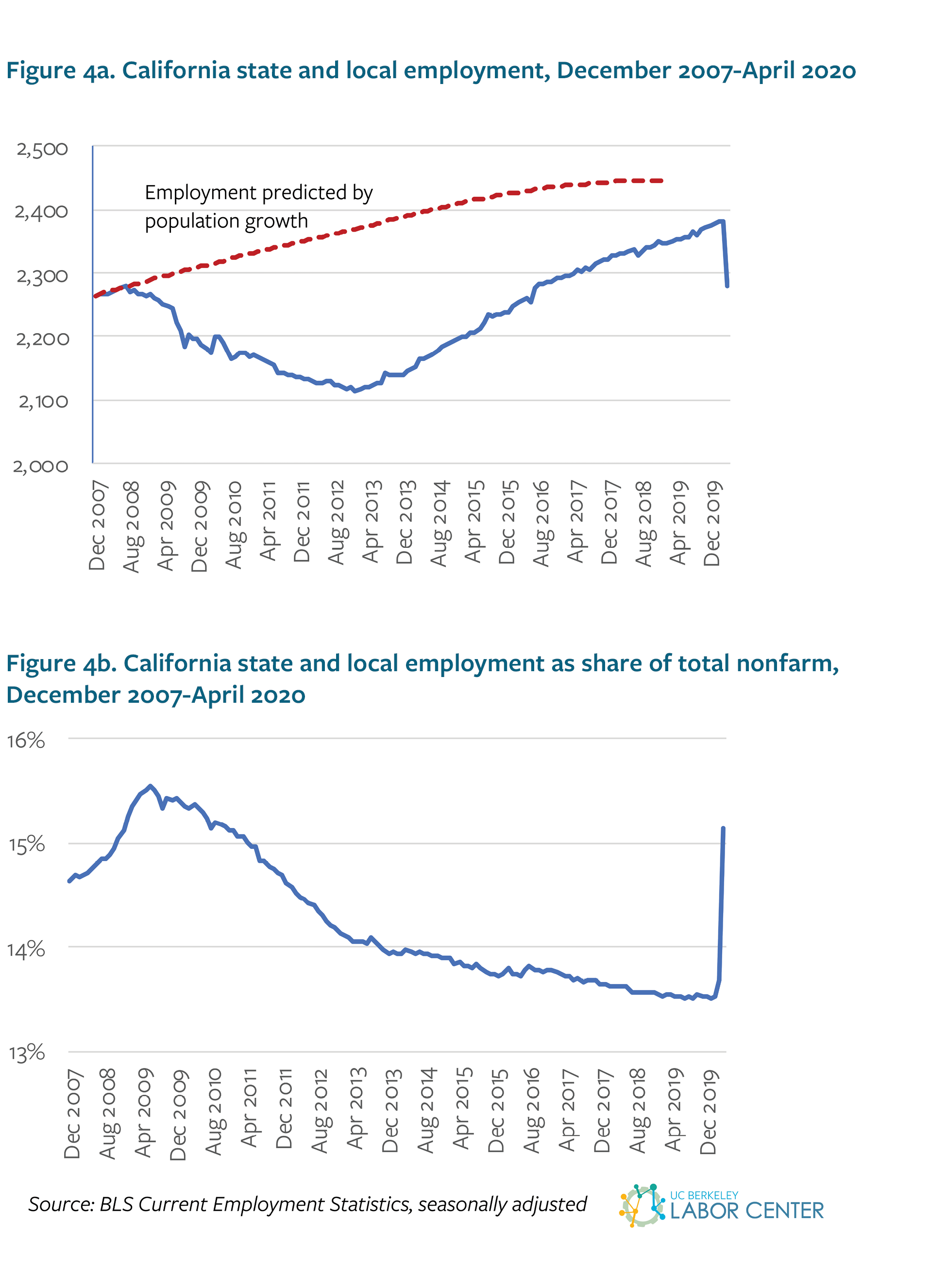 Jobs in the public sector

More than half of state and local workers are in education: 41% in local education (which is nearly all K-12, with a small amount of community college employment) and 12% in state education (state university and community college systems) (Figure 5). Local government employs far more people—65% of government workers—than the state (23%) or federal (13%) governments. After 2008, there was little change in the distribution among the public sector categories used by the Bureau of Labor Statistics—an increase in state government education (higher education) and both state and local hospitals, but a slight decline in local government education employment. Like the U.S., more than half of California’s state and local workers are in education (Figure 6). California also saw local education employment decline relative to other government sectors after 2008. Unlike the nation, however, California’s K-12 enrollment has also been declining.

From 2008 to 2020, California’s state education employment (which is less than 10% of state and local employment) grew significantly, and never dipped below pre-recession levels (Figure 7). This growth was made possible by significant increases in student fees and other non-state revenues for higher education systems. When education employment is excluded, state employment recovered much more slowly, paralleling local governments’ slow recovery. Local education employment declined only slightly in California from 2007-2019, at a time when statewide K-12 enrollment stagnated. These trends mask significant education job losses early in the recovery, however, when thousands of teachers were laid off or given layoff notices (Figure 9).

In 2007-08, California employed 300,594 teachers (FTE). By 2010-11, that number had dropped to 268,470 as more than 30,000 teachers lost their jobs. By 2017-18, the number of FTE teachers remained below the pre-recession peak: 295,466 (California Department of Education data). Over that same time period, California’s K-12 enrollment dropped slightly, but the ratio of FTE teachers to students remained higher than before the recession. Research from this time period also illustrated the damage that layoff notices do even when a majority of those teachers are ultimately retained, by creating structural churn that drives teachers away from the workforce.[9] During a time of deepening shortages in the pipeline of teachers, this churn could have significant impacts on the recruitment of qualified teachers in future years.[10] California’s state education employment increased significantly from 2007 to 2019—UC’s non-student employment increased from 122,230 in 2007 to 159,746 in 2019 (31%) (UCOP data).[11] Both the University of California and California State University systems saw state funding cuts, but also implemented multiple significant increases in tuition and fees, as well as increasing other revenue sources (such as summer institutes and international student programs). These strategies allowed state education employment to rise over the past decade even as both systems relied less on state general revenue funding. This shift away from reliance on state funding has had other equity implications for Californians, for whom higher education is more costly and less accessible than before the recession.

The importance of public sector employment for economic opportunity

Public sector jobs play several important roles in the labor market: as an opportunity for workers of color and women, and as a model for secure employment.[12] Government employees are more likely to have health insurance, an employer retirement plan, union representation, and to work full-time. Cuts to the public sector workforce are of particular concern for Black workers, who are overrepresented in the public sector; Hispanic and Asian workers are underrepresented (Figures 10a and 10b). For Black workers, a public sector job is likely to offer higher wages and more job security.[13] When local education employment is removed, whites are underrepresented in the public sector. Whites, who make up only 37% of the total California workforce, account for 64% of California’s teachers.[14] Only 5% of California’s teachers are Black, lower than their share of the overall workforce.

Over the last recession, Black workers in the public sector were more likely to lose their jobs than white workers—Black women even more than Black men.[15] The COVID-19 downturn has been especially damaging for Black workers and other workers of color.[16] The consequences of significant cuts to the public sector will likely exacerbate these trends. The economic impacts of COVID-19—driven, at least initially, by shelter-in-place orders that forced many businesses to close down—have been sudden and severe. In just three months, an estimated one quarter of the labor force has been disrupted.[17] Nearly 20 million U.S. jobs have been lost (19.6 million total nonfarm employment, a decline of 13% since February) (Figure 11a). This is more than twice the total job loss during the Great Recession. In May, private sector employment increased by more than 3 million, but public sector employment continued its pace of decline: more than 585,000 jobs were lost.[18]

So far, California’s job loss rates nearly mirror those in the U.S. as a whole (Figure 11b). The unemployment rate in California was at 15.5% in April 2020, higher than the national rate of 14.7%. The employment-population ratio in California in April 2020 was just above 50%, an all-time low since BLS began tracking this measure in 1976.[19] The rapidity of job loss in the public sector is unlike previous recessions and has alarming implications for the future. In just three months, we have seen more than 1.5 million public sector jobs disappear; more than 150,000 in California. In the last recession, public sector job losses did not begin in earnest until six months after the recession’s official beginning. That is not the case today: the shutdown of many government services has accelerated public job losses in advance of the upcoming budget cycle. Many public sector employers could not do layoffs until the end of their fiscal year (June 30), even for workers who were unable to report to work, and most are bound by either contractual or statutory requirements for layoff notice. We expect that public sector job losses will escalate quickly starting June 1 as those notice periods end and throughout the summer, as revenue losses are realized, 2020-21 budgets are adopted, and decisions are made about reopening universities, K-12 schools, and other government facilities.

Governor Newsom and the California legislature are currently in negotiations over how the state will manage an estimated $54.3 billion deficit. Local governments—including cities, counties, and school districts—are preparing their fiscal year 2020-21 budgets under conditions of great uncertainty. This is particularly true for entities that depend on the state for the vast majority of their revenues, such as school districts.

Nationally, local education employment and local government general administration have already fallen below their lowest points in the Great Recession. Those two sectors account for two-thirds of state and local employment, making this drop an ominous sign of things to come.

In part because California’s public sector recovery was much stronger than the nation’s after the Great Recession, the state’s public sector employment has not yet dipped below the worst levels we saw in 2013. But those troughs came nearly six years after the recession began; depending on the shape of recovery and the fiscal policies enacted in the months and years to come, California could see state and local employment at levels below the worst months of 2013, when there were fewer Californians and austerity ruled the day.

[3] Allegretto, “A Post-Great Recession Overview of Labor Market Trends in the United States and California.”

[6] Allegretto, “A Post-Great Recession Overview of Labor Market Trends in the United States and California.”

[14] Author’s calculations from California Department of Education data at https://www.cde.ca.gov/ds/sd/cb/dataquest.asp.

[18] All numbers are from the United States Bureau of Labor Statistics, Current Employment Statistics.