California made historic gains in health insurance coverage under the Affordable Care Act (ACA), but several million Californians remain uninsured and many struggle to afford individual market insurance. If the state takes no action, the number of Californians uninsured is projected to increase to 4.4 million in 2023 due to the elimination of the individual mandate penalty as well as other trends such as premium growth, population growth, and changes in eligibility due to minimum wage increases.[1] Similarly, if the state takes no action the individual market is projected to be smaller and have a less healthy risk mix, resulting in higher premiums that would further reduce affordability.

Many California policymakers have expressed a desire and commitment to resist federal sabotage of the ACA, control health care costs, and achieve universal health care coverage. As the state explores ways to fundamentally redesign our health care delivery system—including by adopting a single payer or other unified public financing approach—state policymakers are also considering near-term policies that do not require federal approval but address the immediate challenges of improving affordability and expanding coverage. Options currently being considered include:

While the effects of these policy elements have been analyzed separately,[4] this brief is the first to look at the combined effects on affordability and coverage. 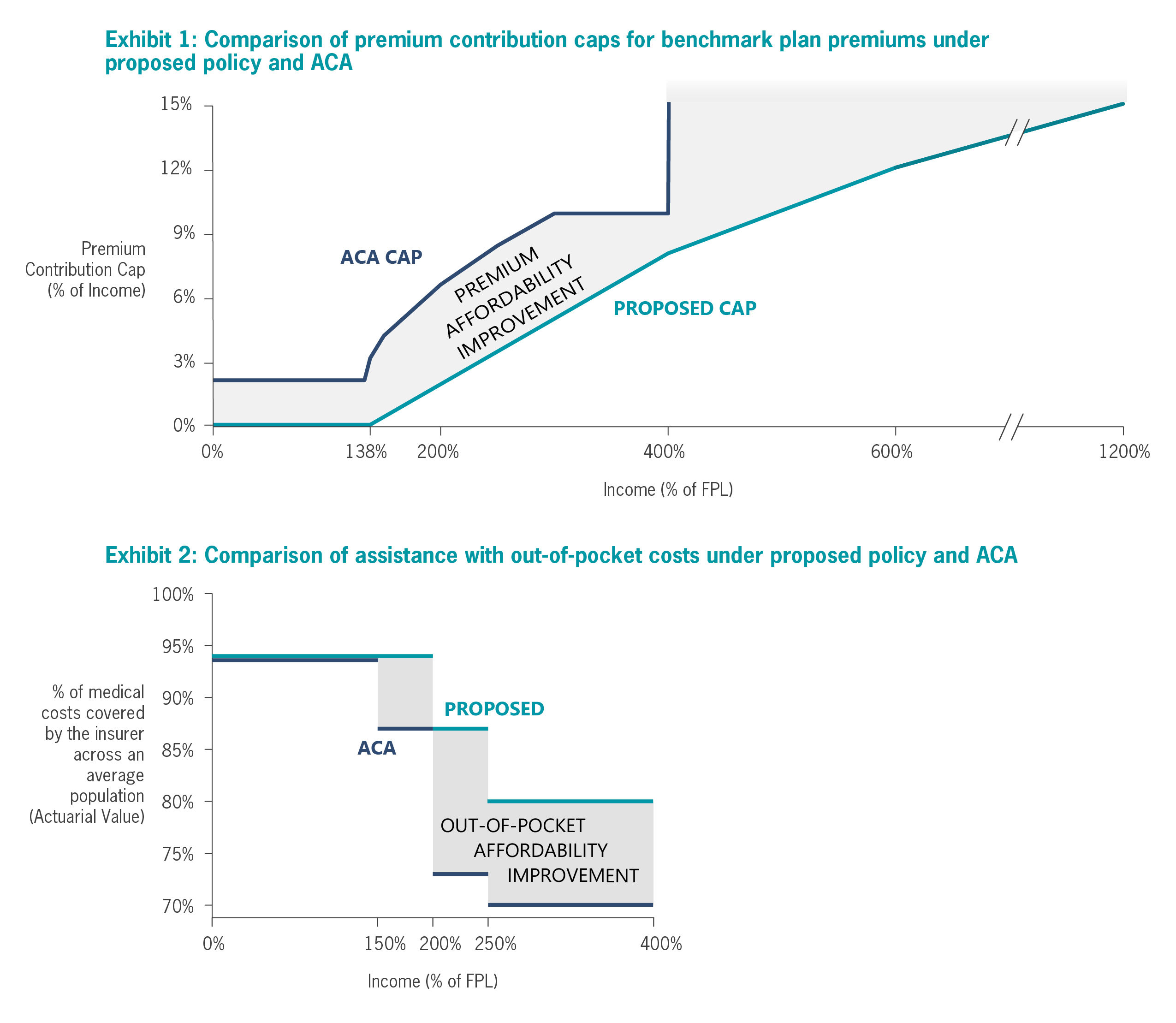 If these affordability improvements, along with Medi-Cal expansion and an individual mandate, were fully implemented by 2023, 3.6 million Californians would benefit, relative to projections if no action is taken. This includes 1.7 million Californians who would be enrolled in coverage instead of being uninsured in 2023, and 2.3 million people enrolled in the individual market who would either receive state assistance with health care costs or experience lower premiums. Approximately 400,000 Californians are counted in both totals—they would enroll in the individual market instead of being uninsured and would also benefit from lower costs, resulting in there being 3.6 million people who are better off relative to the status quo. These projections are based on version 2.4 of the UCLA-UC Berkeley California Simulation of Insurance Markets (CalSIM) model.[5]

State action would result in 1.7 million more Californians with insurance

2.3 million individual market enrollees would spend an average of 35% less on premiums

Premium contributions for the 2.3 million Californians projected to enroll in the individual market by 2023 under these policies would be, on average, 35% lower than individual market premium contributions for this group if no action were taken. Many would also have lower out-of-pocket costs for care. These 2.3 million include:

California has the opportunity to build on its successes implementing the ACA by continuing to cover more Californians and providing greater relief from the high costs that some still experience with individual market coverage. If the state takes no action, we project that the number of uninsured will increase to 4.4 million by 2023 and the lack of an individual mandate penalty will increase premiums by an additional 8%.[13] If, however, the set of policies being proposed were fully implemented by 2023, the state would be able not only to maintain the progress realized under the ACA, but also to make substantial improvements in both coverage and affordability, providing relief to 3.6 million Californians. Furthermore, these policies would reduce coverage disparities that exist for undocumented immigrants, Latinos, and the lowest income Californians.

While other states have implemented some elements of this set of policies,[14] California could be the first to expand full-scope Medicaid coverage to undocumented adults and the first to cap premium contributions based on income for all individual market enrollees. Even as California explores options for more extensive health system reforms, including how to attain federal approval, the Golden State can be a model for other states by helping more Californians gain more affordable coverage now.

[3] A full description can be found in the description of “Option 1” in Covered California, “Options To Improve Affordability In California ’s Individual Health Insurance Market,” February 1, 2019, https://hbex.coveredca.com/data-research/library/CoveredCA_Options_To_Improve_Affordability.pdf.

[6] For more on the projected effect of the individual market penalty, see Dietz et al., 2018.

[10] Additional cost-sharing-reduction subsidies would make the benchmark plan Gold (rather than Silver for the population under 400% FPL). More than 90% of Californians with a fully-insured employer-sponsored insurance plan have a Gold plan or better. California Department of Managed Health Care, “Public Meeting on Large Group Aggregate Rates and Prescription Drug Costs,” (March 12, 2019), https://www.dmhc.ca.gov/Portals/0/Docs/DO/SB546SB17publicmeetingpresentation.pdf.

Acknowledgements: We are grateful to the California Health Care Foundation and The California Wellness Foundation for their support of this brief. Thanks to Amy Adams, Beth Capell, Jen Flory, and Sarah Dar for reviewing the brief, and to Jenifer MacGillvary and Sandy Olgeirson for their help preparing it.