HomePublicationsBlogMore than 500,000 Californians estimated to be eligible for Medi-Cal but uninsured in 2016-2017

More than 90% of Californians eligible for Medi-Cal are now enrolled in the program. This exceeds the take-up rate for individual market coverage, and is similar to the take-up rates for Medicare and employer-sponsored insurance. This Medi-Cal enrollment rate is also significantly higher than the take-up rate prior to the Affordable Care Act (ACA), in large part due to California’s strong efforts to enroll people in the insurance options for which they are eligible, along with the “welcome mat” effects associated with the Medi-Cal eligibility expansion. (See note 1 below post for more on how these take-up rates are measured.)

However, 543,000 Californians ages 0-64 were estimated to be eligible for Medi-Cal but uninsured in 2016-2017, most of whom were adults (79% were over age 18), according to the California Health Interview Survey (CHIS). Individuals eligible for Medi-Cal can enroll at any time of year. While Medi-Cal eligible individuals who seek care at a clinic or hospital are likely to receive assistance enrolling at that time and can have their care covered retroactively by Medi-Cal, enrolling in advance of needing care ensures that an individual has chosen or been assigned a primary care physician and may make one more likely to receive regular and preventive care.

Why are some Californians uninsured in spite of their Medi-Cal eligibility? Examples include:

The number of Californians who are uninsured but eligible for Medi-Cal could grow to 900,000 in 2020 unless the state takes further action, according to estimates we published with colleagues from the UCLA Center for Health Policy Research. This estimate is higher than the 2016-2017 CHIS estimate above, partly as a result of the individual mandate penalty being eliminated. (See note 3 below post for additional reasons.) Nationally, nearly all uninsured individuals who are eligible for Medicaid were exempt from the ACA individual mandate penalty, but many may not have been aware of this exemption. For those who did not realize they were exempt, the penalty created an incentive to find out what coverage they were eligible for and enroll.

The proposed U.S. Department of Homeland Security “public charge” rule is another factor that threatens to reduce enrollment among those eligible for Medi-Cal. This proposed rule would allow the government to consider enrollment in full-scope Medicaid benefits, among other public programs, as one negative factor that counts against individuals in their application for a green card or a visa. With colleagues from the UCLA Center for Health Policy Research and California Food Policy Advocates, we estimated that this rule change, if finalized, could have a chilling effect on public program enrollment by individuals in certain immigrant families, resulting in as many as 741,000 fewer Medi-Cal enrollees. This potential enrollment effect is in addition to the projection of 900,000 uninsured in 2020.

Uninsured Californians under the age of 65 who were estimated to be eligible for Medi-Cal were predominantly Latino (67%), similar to the share enrolled in Medi-Cal who were Latino in 2016-2017, according to CHIS.

Two-thirds (67%) of uninsured Medi-Cal eligible adults age 19-64 spoke a language at home other than or in addition to English (exhibit below), and of those, three-quarters (75%) reported speaking English less than very well. This was similar to the language trends for Medi-Cal enrollees. 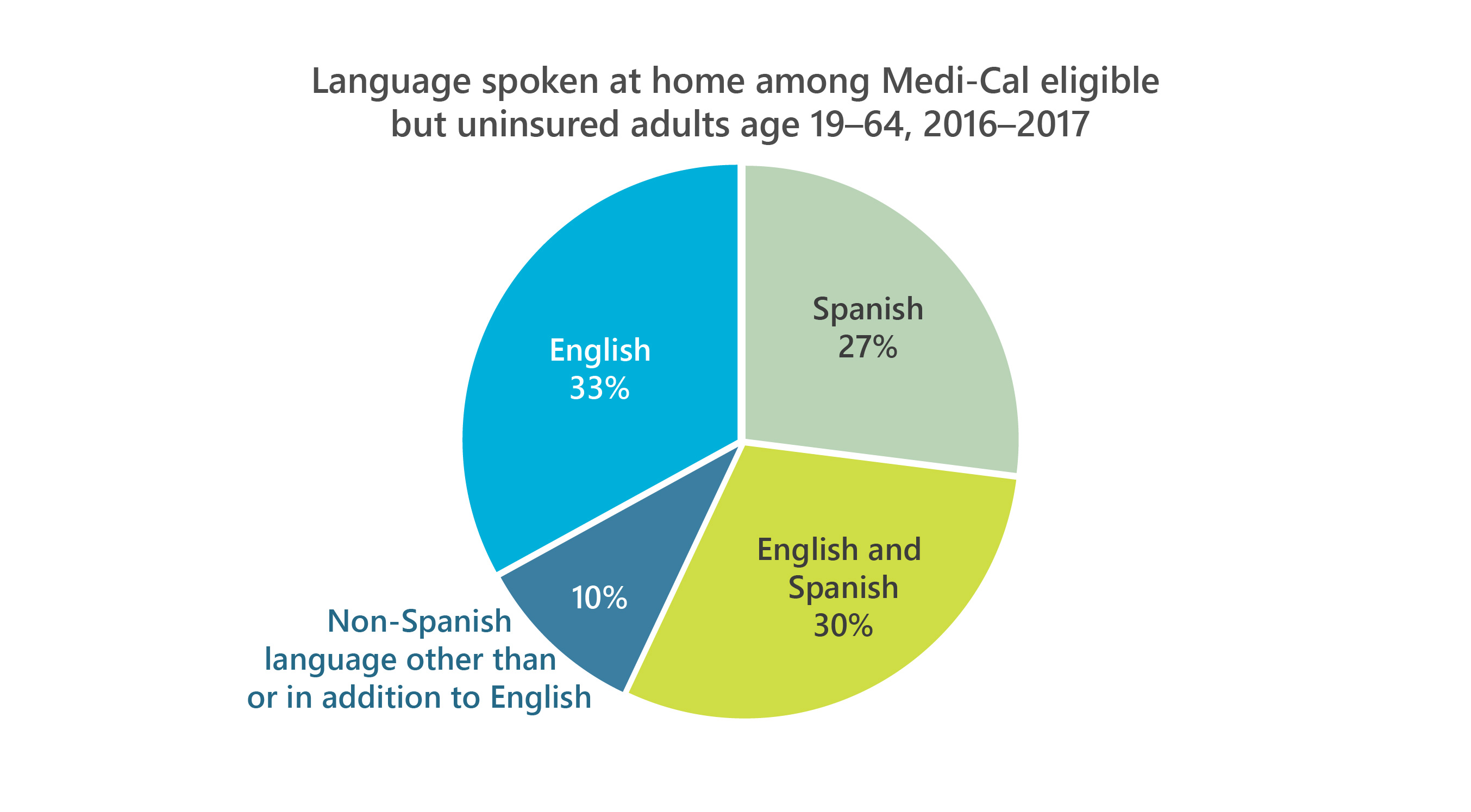 In 2016-2017, approximately four out of ten (43%) Medi-Cal eligible uninsured Californians under the age of 65 were born outside the U.S. and, of the remainder who were U.S.-born, some may have family members who are immigrants. A lower percentage of Medi-Cal enrollees (28%) were U.S.-born, according to CHIS.

To push towards even higher Medi-Cal enrollment levels, the state could take steps such as:

In concert with other proposals to expand Medi-Cal to undocumented adults and improve affordability of insurance through Covered California, efforts to ensure a high rate of Medi-Cal enrollment could help move the state closer to universal coverage.

Note 1: The take-up rates described at the beginning of this blog post focus on those who have enrolled and those who were eligible but remained uninsured. Take-up in Medi-Cal, for example, excludes those who are eligible for Medi-Cal but chose not to enroll and instead took up employer coverage.

Note 2: In 2015, we published a study on Medi-Cal enrollment challenges from the perspective of frontline workers who assist with enrollment. Progress has been made in addressing some of the challenges described in that report, but further research is needed to assess the specific challenges that remain today.

Note 3: Our 2020 projection of those eligible for Medi-Cal but uninsured differs from the 2016-2017 estimates from the CHIS not only due to the elimination of the ACA penalty, but also due to population growth and differences in estimation of eligibility and weighting techniques.