» Read What is at stake in Supreme Court ruling on Janus vs. AFSCME, op-ed in the San Francisco Chronicle by Ken Jacobs and Sarah Thomason.

» VIDEO: The Union Effect in California

“The Union Effect in California” is a three-part series exploring the ways in which unions affect the lives of all working people—both union members and nonunion members—in California. The studies were conducted as the U.S. Supreme Court prepares to issue a ruling in Janus v. American Federation of State, County, and Municipal Employees that threatens to weaken public sector unions. 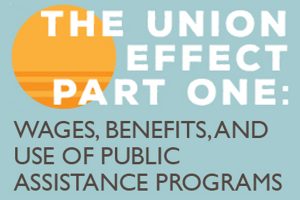 The first study, Wages, Benefits, and Use of Public Safety Net Programs, shows that by bargaining together through unions, California workers increase their earnings by approximately $5,800 per worker annually, for a combined total of $18.5 billion. Union workers also have more access to health and retirement benefits, thereby reducing reliance on the state’s public safety net programs.
By Ken Jacobs and Sarah Thomason 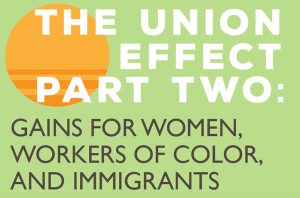 The second study, Gains for Women, Workers of Color, and Immigrants, shows that, while all workers in California have higher wages and greater access to benefits when covered by a union contract, those workers who earn the least in nonunion workplaces—women, people of color, and immigrants—gain the most. By Sarah Thomason and Annette Bernhardt 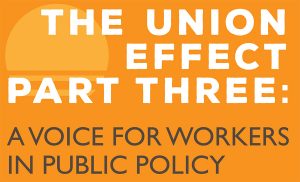