Starting in 2015, large employers (100+ full-time equivalent employees) are required to offer affordable health insurance plans for their full-time workers or face a penalty. Starting in 2016, firms with 50 to 99 employees will also face this requirement. Some have worried that employers will move workers from full time to part time in order to avoid paying for health benefits, prompting warnings that the ACA will kill full-time jobs. 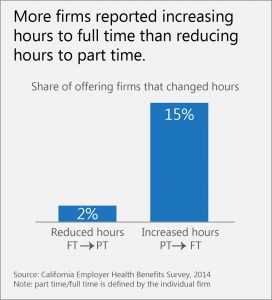 While we are unlikely to see dramatic reductions in hours, my colleagues Dave Graham-Squire and Ken Jacobs predict that workers in low-wage sectors like restaurants, nursing homes, and retail are the most likely to face reduced hours. Have employers already begun moving workers from full time to part time to avoid paying benefits? The CEBHS was conducted in 2014, prior to the implementation of the ACA requirements for employers, but some predicted that employers would cut hours in anticipation of the law. While 2 percent of California’s offering firms reduced hours of any full-time workers to part-time, 15 percent of firms increased hours of any part-time workers to full-time. This may be more indicative of an improving economy than the impact of the ACA, but it makes it harder to argue that the ACA is killing jobs. As the employer penalties begin to go into effect, we will see if our predictions hold true that only a small subset of low-wage workers see hours reductions.