This is the first blog post in a three-part series on preliminary trends in job-based coverage and work hours under the Affordable Care Act in California. A year and half into the implementation of the major components of the ACA—which in California are coverage via the Covered California marketplace with federal subsidies as well as Medi-Cal expansion—we are starting to get data about what has actually happened. We won’t have worker-level data until the fall, but in the meantime the 2014 California Employer Health Benefit Survey from NORC and the California HealthCare Foundation (CHCF) gives us an initial indication of how the ACA has affected job-based coverage and work hours. (Check out CHCF’s chart pack for a great summary of the CEHBS data and comparisons both over time and between California and the US.)

Target, Home Depot, Walmart and Trader Joe’s all made headlines when they announced they would be dropping health coverage for part-time workers. Some of these part-time workers will be newly eligible for Medi-Cal under the ACA; others will be able to purchase subsidized coverage through the Covered California marketplace. While the headlines are notable because they result in a cost shift from large corporations to taxpayers, data from California indicate that the most pronounced declines in coverage offers to part-timers are not among large corporations, but among very small firms. 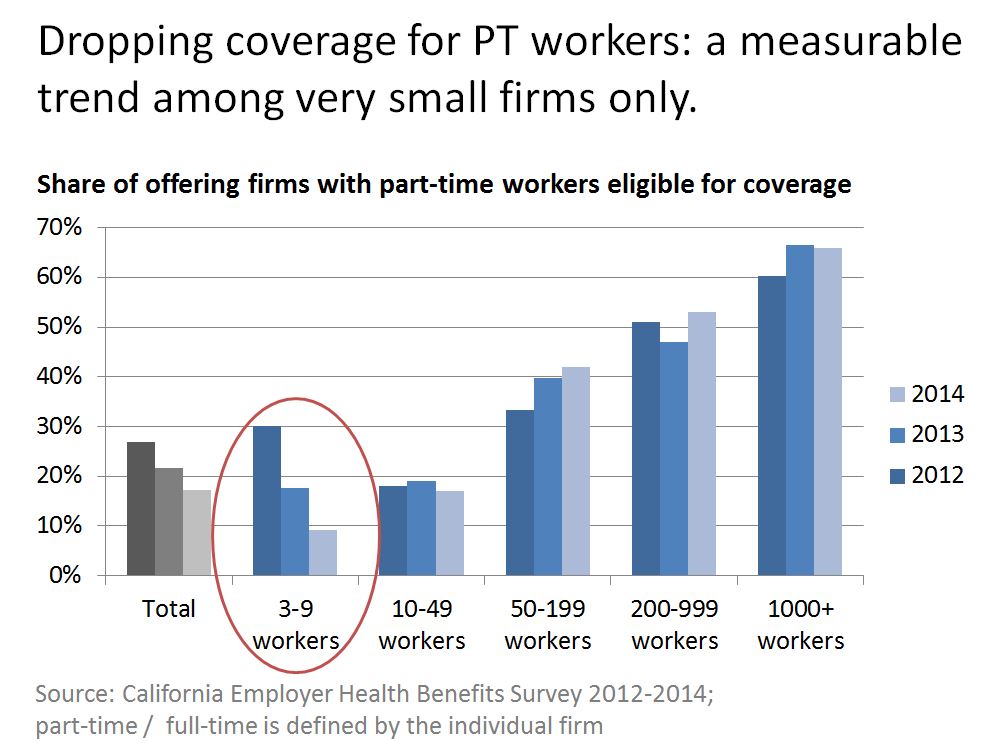 The CEHBS data show a significant decline in coverage for part-time workers at firms with three to nine workers. These firms are the least likely to offer coverage to part-timers, but in 2012 some 30 percent of them did. By 2014, the share had dropped to just 9 percent. The trends for medium and large firms, however, appear to be roughly flat. About half of the offering firms in California are in this “very small” category, so this means that many firms made the decision to drop. But only 6 percent of workers work in one of these very small firms, so relatively few workers were affected.

Some of the part-time workers affected likely qualify for the Medi-Cal expansion or subsidies through Covered California. For some part-timers, subsidized insurance through Covered California may even be a better deal. But others may not be eligible for those programs due to immigration status or income level and may have difficulty affording health coverage on their own.