This is the second blog post in a three-part series on preliminary trends in job-based coverage and work hours under the ACA in California, based on data from the 2014 California Employer Health Benefit Survey from NORC and the California HealthCare Foundation (CHCF). The first post addressed the question: Are California Employers Dropping Health Insurance for Part-Time Workers?

In 2013 UPS announced that they were dropping health insurance coverage for working spouses who were eligible for coverage through their own jobs. The company explicitly cited the ACA as a reason for the change, though many suggested that the real reasons had more to do with controlling the company’s health care costs than health reform. What does the ACA say about spousal coverage, and what have California firms actually done?

Under the Affordable Care Act, employers with 50 or more full-time equivalent employees (FTEs) are required to offer affordable health insurance plans for their full-time workers or face a penalty starting in 2016. (The responsibilities for employers with 100 or more FTEs began in 2015.) Employers must offer to cover children as well, but there is no requirement that they offer spousal coverage. Among employers who offer health insurance to their workers today, almost all (98 percent according to CEHBS 2014) offer coverage for children and spouses. But there are no government penalties for firms like UPS adjusting eligibility for, or even dropping altogether, their spousal coverage. Economics suggests that companies might pay the price in other ways, however; health benefits are still a significant factor in being able to attract talent.

One important note on family coverage: If employee-only coverage is affordable and an employer offers coverage to family members, then those family members will not qualify for any federal subsidies that might have been available to them through the Covered California marketplace. This is true regardless of the affordability of that offer of family coverage. This is what has come to be known as the “family glitch.” Because of this glitch, an employee’s family members could actually find themselves worse off with an offer of coverage through an employer if that offer is very expensive, since the offer in and of itself keeps the family from being eligible for more affordable subsidized coverage. 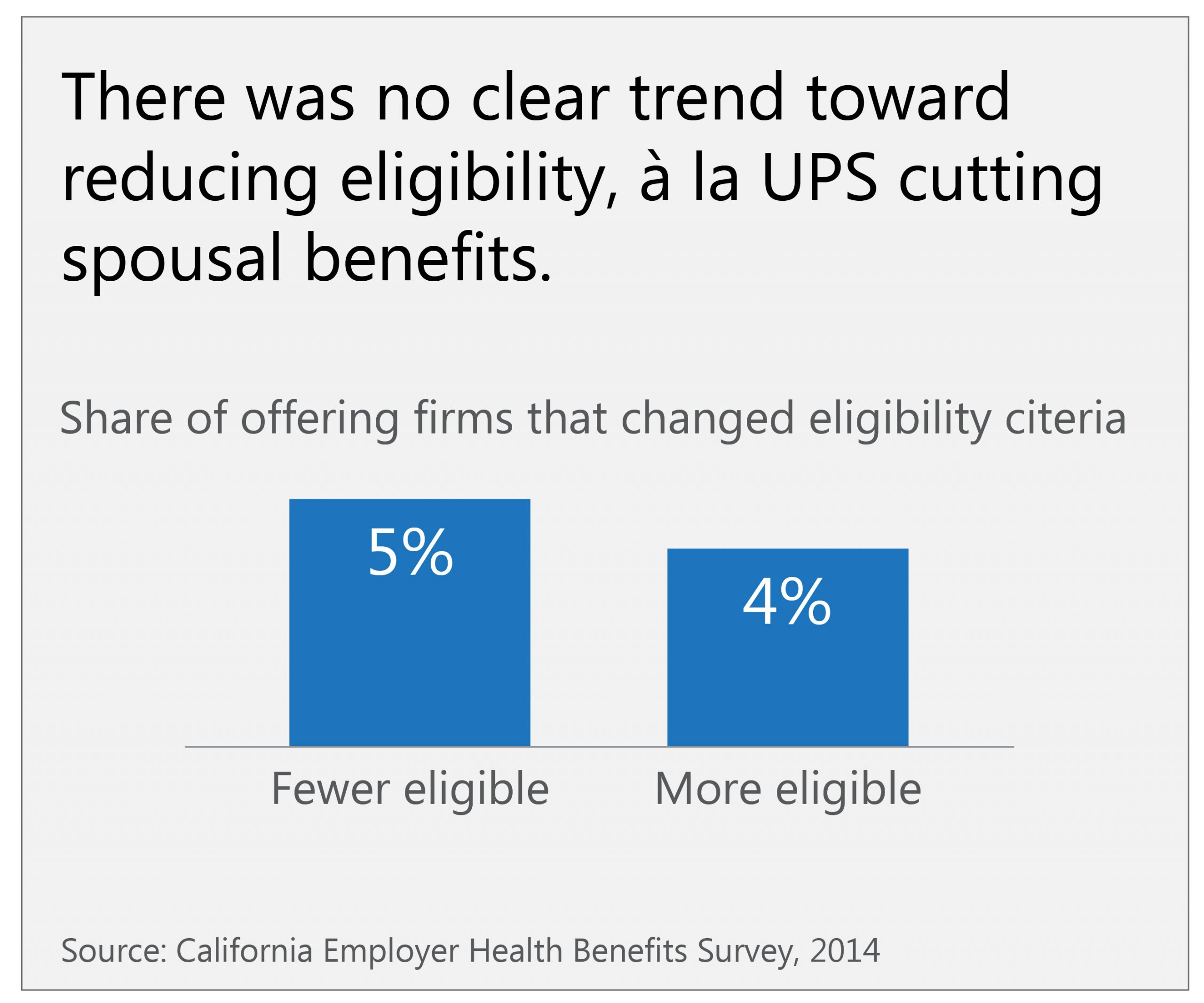 Do we see any indication that California firms are going the way of UPS? CEHBS doesn’t ask directly, but the questions it does ask show little indication of shift away from spousal benefits. In California, less than 1 percent of offering firms stopped offering spousal coverage within the last 12 months, according to the 2014 CEHBS. UPS did not drop spousal coverage altogether, they just changed their criteria to make fewer people eligible for coverage. CEHBS indicates that 5 percent of offering firms similarly changed their criteria in some way to make fewer people eligible; at the same time, 4 percent of firms changed criteria and made more people eligible.

The 2014 CEHBS reflects conditions during the first year in which Medi-Cal was expanded and subsidies were available through Covered California, and prior to the implementation of the employer responsibility provisions. We will have to wait for more data to see whether employer offer rates of spousal coverage remain constant over the longer term.