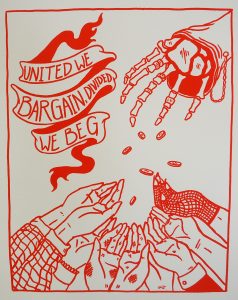 This image represents the variable identities, which define labor in the modern age. Though seemingly dissimilar and disconnected with one another, each laborer symbolizes a collective struggle, perpetuated by a single embodied oppressor. The skeletal hand is a symbol of impending demise and ill will, adorned with rings and jewels, while tossing few coins to the hands of those who depend upon it. The banner reads: “United we bargain, divided we beg” as a call to unify today’s laborers to bite back at the hand which (barely) feeds us. 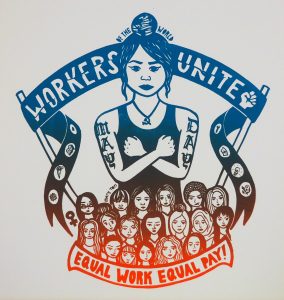 Physical, emotional, or spiritual—my labor is NOT free. Women are all too often undermined for their work and contributions. This May Day, I am highlighting the diversity of thoughts, ideas, and perspectives that we provide. 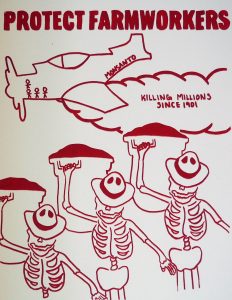 Farmworkers all over the world are oppressed and harmed by the practices of the American agrochemical company, Monsanto. This print was inspired by my loved ones and my desire to fight for those who may not have the privilege of a platform to be heard, like the one I have being a part of Art for Social Change club. I hope my audience will become aware of the negative effects that Monsanto has on farm laborers, such as pesticide spraying, and take the time to learn more on how to help our surrounding communities. 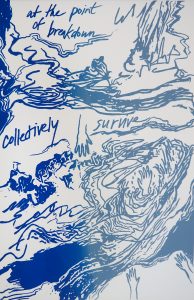 This print explores the alienation and hopelessness that many experience as a result of laboring under capitalism, and the possibility of community and mutual support. Wealth inequality, exploitative labor practices, high cost of living, and inadequacy or lack of public services have created an epidemic of physical and mental health issues in the U.S. These factors, in combination with the idealization of individualism and the stigmatization of poverty, isolate workers as they fight to stay afloat. In designing this print, I aimed to highlight feelings of frustration and powerlessness caused by systemic exploitation, and the simultaneous challenges to and need for community and active organizing efforts in order to overcome oppression under capitalist white supremacy. 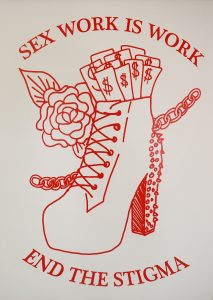 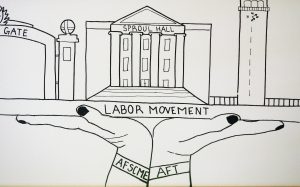 Time and time again we see UC Berkeley, and the entire UC system, treat their employees poorly. The very employees that keep this institution running. This piece embodies the weight members of AFSCME and AFT carry. They feed and educate our student body, amongst many many other things, and it is our responsibility to support them in their fight for fair wages, benefits, and treatment. 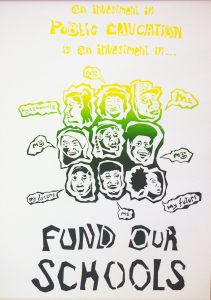 This poster was inspired by those who participated in the Oakland teachers’ strike last February, and is dedicated to all public school students, educators, and staff. After a seven-day strike, the Oakland Education Association and its members achieved a historic contract, including among other policies, a 14% total increase in teacher’s salary over the next 4 years.
If we do not adequately support those who work to educate and support our kids, then how can we expect our communities to create a future for themselves? Every kid has a right to their education, the opportunity to empower not only themselves, but also their families, neighborhoods, and cities. And it begins with funding our teachers, our nurses, our counselors. our staff, our public schools.

All images and texts were first cut from paper by hand, then assembled digitally. 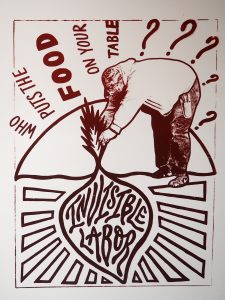 This piece highlights the often unrecognized labor of migrant farm workers, and depicts the heavy burden of working to put the food on our tables. It could be telling of any field of manual labor which often employs our most vulnerable migrant community members, and which is the most taken-for-granted by a society that criminalizes them. 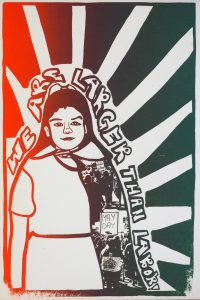 Title: For my sister 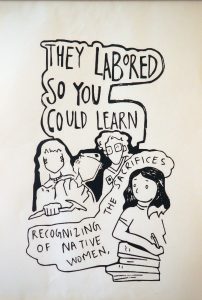 Title: recognizing those before me

This poster recognizes the sacrifices made by the Native women in my family who labored and endured so much for me to be able to have the opportunity to explore my passions, creativity and education. This is a thank you to them and recognizing their strength and dedication as farmers of our desert homeland land and nurses. 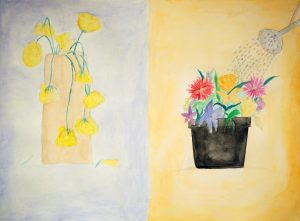 This painting represents my parents’ occupational work history. On the left, there are flowers in a vase (my mother). It is unsupported by soil or fresh water, just like my mother when she was told she could not leave her home to pursue an education until she was married. These flowers have given more than they have received by the look of its withered petals and weak stems. After my mother married, she could not go to school until she was 37 because my brother and I were too young. At 50 years old, my mother is still trying to move up the ladder.

On the right, there are flowers in a pot of soil being watered (my father). These flowers will not only remain strong but can grow because they have a foundation and support. My father immigrated the United States during the Lebanese civil war at 18. My father benefited from coming to the U.S at such a young age because he had time to gain experience and move up the ladder with the added moral support from his family.

This podcast is an exploration of the impacts of the rideshare economy on Taxi workers and rideshare workers. It will explore the successful campaign of the New York Taxi Alliance, the broader issue of the rideshare economy, and how the issue relates to labor studies as a whole. This podcast is meant to be consumed in one’s free time, usually while multitasking on some other minute task- on the way to work, in between class, or during a relaxing dinner.

A script of the podcast episode is attached below for accessibility reasons (most podcasts provide a script for people with hearing issues). A works cited list is also attached at the end of the script for further reading and listening. 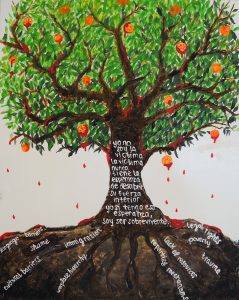 This creative project is a painting aimed at creating more visibility for migrant female farmworkers who face sexual exploitation while laboring in the fields. The inspiration for this artwork came from the documentary “Rape In The Fields” one of the first, and only, forms of exploration for migrant women’s struggle against sexual exploitation in the farming industry. Persecution in the fields is demonstrated through several symbolic elements in the painting. The plight of these women is characterized in the painting as blood oranges, with a double meaning to show the hidden violence of the agricultural industry. These oranges represent the fruits of these women’s labor, and the blood represents the sexual violence that these women are subjected to in their workplace. There is harsh retaliation for those who report, and many undocumented women have lost their jobs or endured threats of firing if they blow the whistle. The bleeding oranges in the tree are for the women who have been raped by those in a position of power, while the blood spilled on the ground is for the women who have lost their jobs trying to speak out against this abuse. The poem in Spanish on the trunk of the tree highlights the language barrier these women face in their everyday lives. The poem translates to: “I am not the victim. The victim never hopes to discover her inner strength I do have that hope, I am a survivor.” The structure of the tree itself highlights the bureaucracy within the workplace -workers are the trunk (the base structure) and supervisors are the branches (at the top)- unable to exist without the trunk of workers, but always ranked higher and with more power. The branches have access to more resources (sunlight), casting shade on those below them because of the structure of this rigid hierarchy. The trees roots are decorated with words which symbolically represent the “roots” of the problem that women in the fields face. These issues include: legal rights, reporting mechanisms, trauma, cultural barriers, etc. Finally, we present the tree, in its entirety, as the capitalist system: Should we cut down this tree of capitalism altogether or should we take the fruits that it has yielded and plant seeds for new trees to grow? 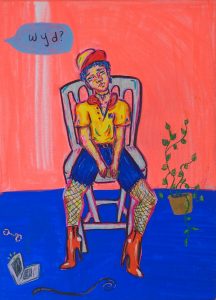 Title: One Job Should Be Enough: Queer Precarity, Millennial Insecurity, low-Wage labor, and the Dangers of Anti-Sex-Work Policy

we’re living in an era where headlines like “millenials are screwed’ are everywhere. signaling the generations student-debt peonage future, coupled with news reports of trump’s transphobic. xenophobic. blatantly racist, 99%-hating and anti-sex worker policies that are only making the young worker’s hustle harder. this portrait points out that “LGBTQIA+ people make up a disproportionately high number of the people in many low-wage sectors” (Hollibaugh, Weiss 2015) and the fact that many are forced into juggling jobs to survive. job segmentation often makes sex-work appear as one of the few viable work options, as transbodies are both fetishized and ostracized by the market. this informal worker economy is persistently being attacked due to society’s intersecting fears of sex, feminized labor, people of color, and trans-identities that challenge the white-cis-patriarchy that western capitalism runs on. 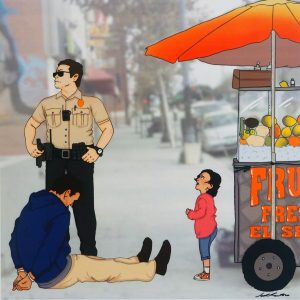 Growing up in East Los Angeles I was introduced to the field of undocumented labor early in my life. Whether it was my mother forcing me to sell candies outside of her all female immigrant-run hair salon or those Saturday mornings outside the swap meet getting fruit from my favorite vendero de fruta, street vending has been part of my life for countless amount of years. When I had the opportunity to make an art-piece based on this class and the labor force I felt the need to create something that spoke out to me, and nothing spoke to me more than the silence undocumented immigrant workers have to face when it came to job insecurity.