Black and Latino retirees are more likely to have lower incomes, from fewer sources.

Among retirees age 60 and older, people of color are disproportionately likely to be low income.[1] According to Current Population Survey data for 2007 –2009, 31.6 percent of Blacks and 46.5 percent of Latinos are in the bottom 25 percent income group. The “Other” race group, which includes Asian/Pacific Islander and Native American populations, is also more likely to be low income (38 percent).[2] 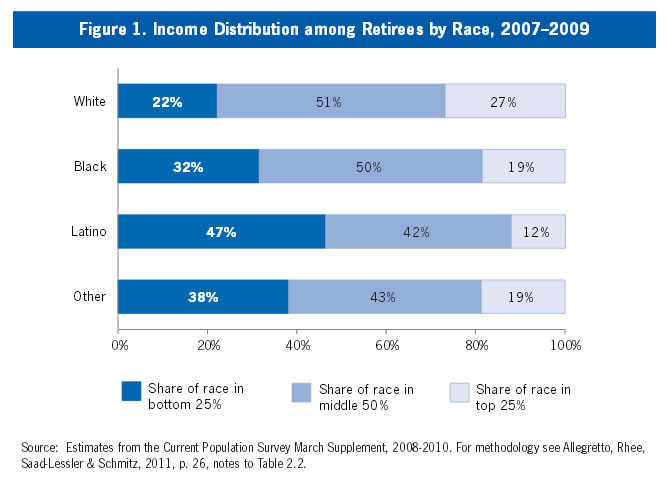 Black and Latino Seniors are much more likely to be poor.

While Social Security has dramatically decreased poverty rates among seniors across all racial groups since the 1930s, deep racial inequality remains. Poverty rates among Blacks (19.3 percent) and Latinos (19.0 percent) are twice as high as the national average for adults age 65 and older (9.4 percent) over the three years spanning 2008 -2010, and two and a half times as high as the poverty rate for whites in the same age group (7.4 percent).[4] Importantly, poverty rates are significantly higher among women of color than among men of color.[5] 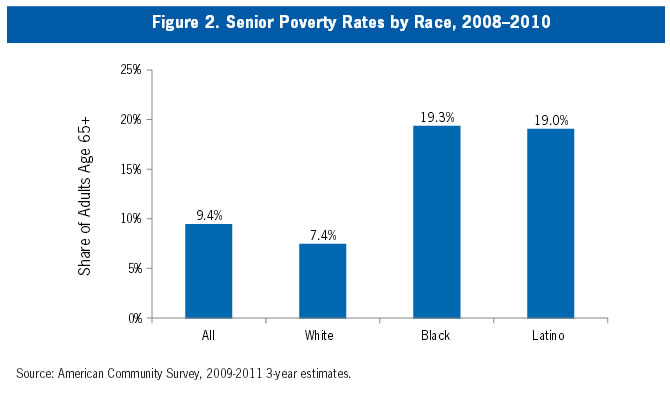 Black and Latino workers are less likely to have a workplace retirement plan.

If racial inequality persists in the distribution of retiree income and in senior poverty rates, what are the retirement security prospects of working-age people of color? One measure is access to a workplace retirement plan, which is critical to middle class economic security and the ability of working people to live in dignity in old age. Here, employed Black workers lag slightly behind employed whites in terms of the share of full-time workers who work for employers that offer a retirement plan (62.4 percent vs. 68.5 percent). Employed Latino workers are most disadvantaged in terms of workplace retirement plan access (43.1 percent). Actual participation rates are even lower because not all workers choose to participate in their employer’s plan, given most are 401(k) type plans where participation is purely voluntary, and because not all workers qualify to participate. Less than half of Black workers (47.7 percent) and less than a third of Latino workers (31.6 percent) in full-time jobs participate in an employer sponsored retirement plan, whether a traditional defined-benefit pension that guarantees lifetime income or, far more com mon, an individual investment account like a 401(k) that entails many risks for workers. 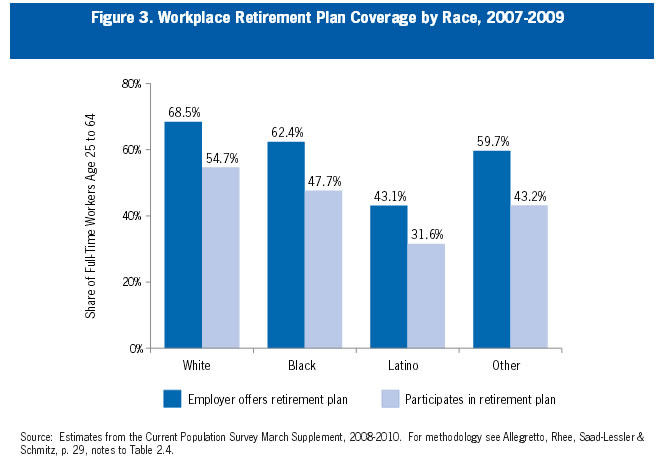 At the same time, pension coverage statistics for employed workers tell only part of the story when it comes to retirement income security for workers of color. In particular, Black workers face lower hourly earnings, higher rates of unemployment, and greater incidence of long-term unemployment than the working population as a whole. Consequently, Black workers face particularly severe challenges in building adequate financial wealth–whether through employer sponsored pensions, home equity, or other financial assets–to have enough retirement income in addition to Social Security to guarantee economic independence in old age. Thus improved access to jobs, especially quality jobs with good wages and benefits, alongside a strengthened Social Security system is necessary in order for more Black workers to be able to retire with dignity.

[2] Race categories in the CPS March Supplement are limited to white, African American, Hispanic, and “Other”.