April 4 marked the 45th anniversary of the assassination of Dr. Martin Luther King. He was killed in Memphis as he supported the effort of Black sanitation workers to form a union. His endorsement of unionization as a central strategy to improve the lives of the Black community was not a recent one. From the very beginning of his prominence as a civil rights leader, he viewed the civil rights movement as being deeply intertwined with the struggle of workers to organize for power and dignity on the job.[2]

In January, the Bureau of Labor Statistics released its annual report on unionization.[3] Overall union density – the proportion of the workforce comprised of union members – declined. At the same time, the union premium – the positive differential between wages received by union members relative to non-union members – still existed. In light of the declining presence of unions, the continued benefits of unionization, and Dr. King’s strong support of unions, this Data Brief presents a picture of Blacks in unions that goes beyond the data in the BLS report. Part II examines overall Black unionization disaggregated by gender. Part III presents data on Black unionization disaggregated by gender and region. Part IV examines Black unionization with a focus on the largest 10 metropolitan areas. The Appendix presents the same analysis as the brief, but disaggregates the data by race and ethnicity.

Key findings in this brief include: 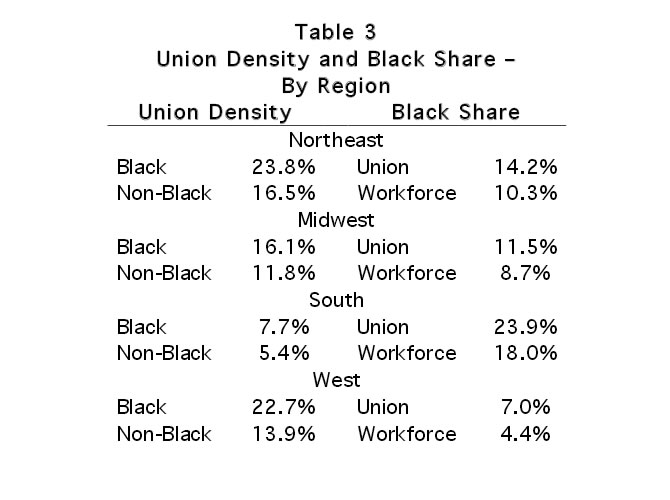 Tables 8 and 9 provide data on Black unionization in the ten largest metropolitan areas.[5] In the largest 10 metropolitan areas, 16.3% of Black workers are in unions in contrast to 11.5% of non-Blacks workers. This pattern of greater union density among Black workers relative to non-Black union density is repeated when the data is disaggregated by gender. In addition, as seen in the analysis for the entire population, the proportion of union members that is Black exceeds the share of the entire workforce that is Black.

Table 10 presents the data for the entire U.S. population and largest 10 metropolitan areas and then compares the relative union densities at the two levels of geographies. For the U.S. population, Black workers were 19% more likely to be union members than non-Blacks (13.1/11.0 = 1.19). However, when the analysis is restricted to the ten most populous metropolitan areas, Black workers are 42% more likely to be union members than non-Black union members (16.3/11/5 = 1.42). This increased probability of being a union member is true when the data is examined by gender. 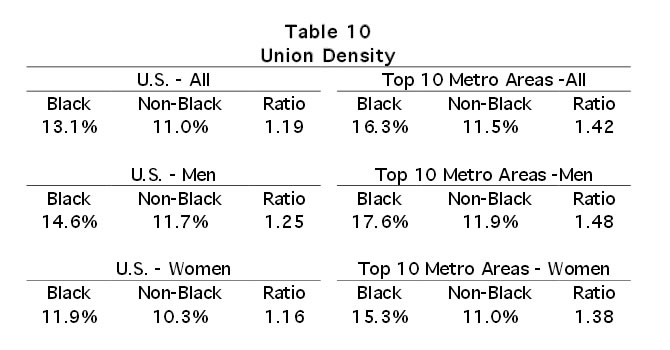 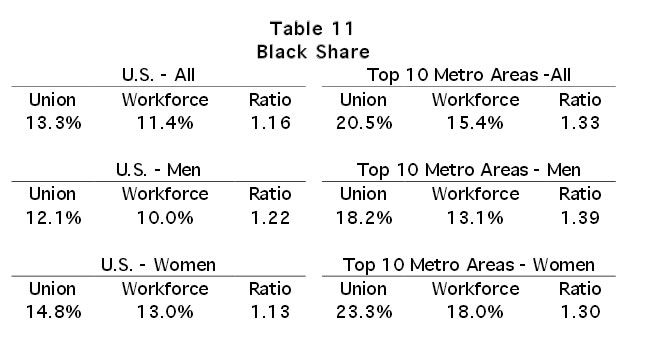 An analysis of 2012 Current Population Survey data reveals that Black workers have a higher union density compared to non-Black workers and Blacks workers comprise a disproportionate share of the union membership relative to their share of the overall workforce. These patterns exist when the data is disaggregated by gender and region. In addition, the pattern is more pronounced when examining data from the 10 most populous metropolitan areas in the country.

The relatively high proportion of Black union members in large metropolitan areas might hold rising importance as the labor movement seeks new ways to improve the conditions facing workers in the United States. In recent years, while union density has been declining, public policy campaigns to raise labor standards have been successful at the state and local level. Local authorities have passed legislation to raise minimum wages, provide paid sick days, and combat wage theft. To the extent Blacks are disproportionately members of unions, a pathway to great public policy success might lie through a stronger relationship with Black communities and their elected officials. 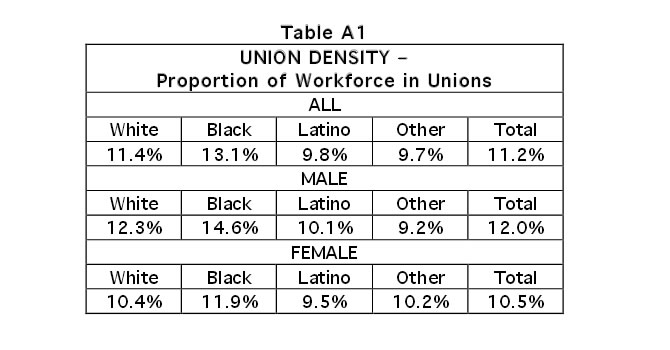 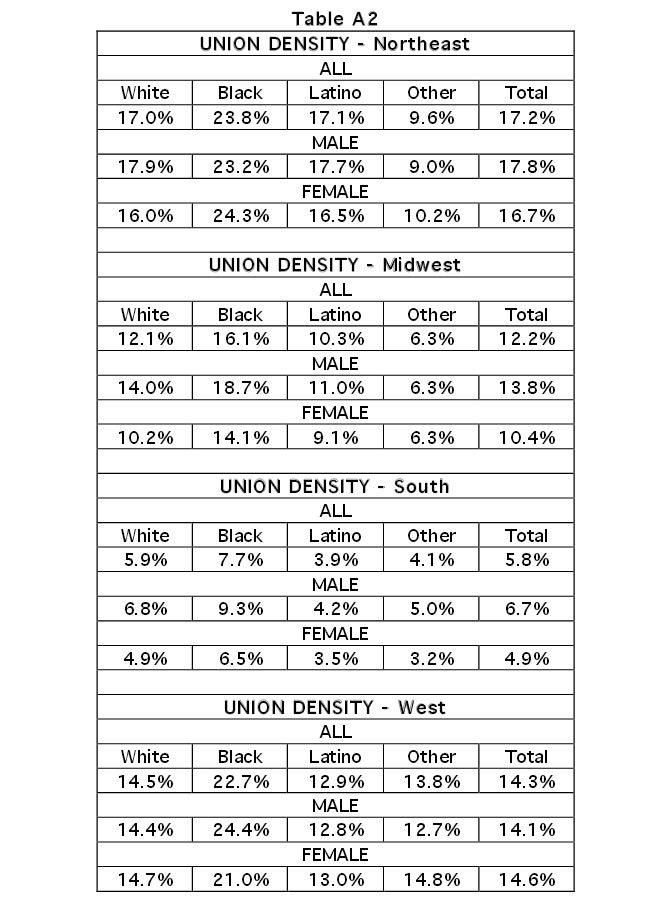 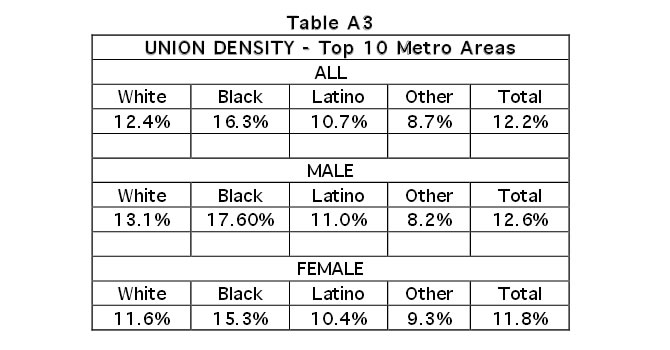 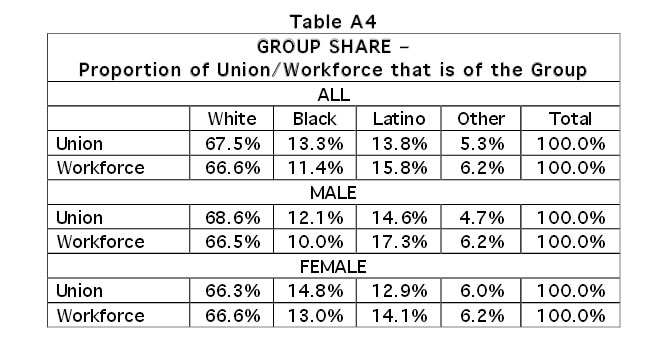 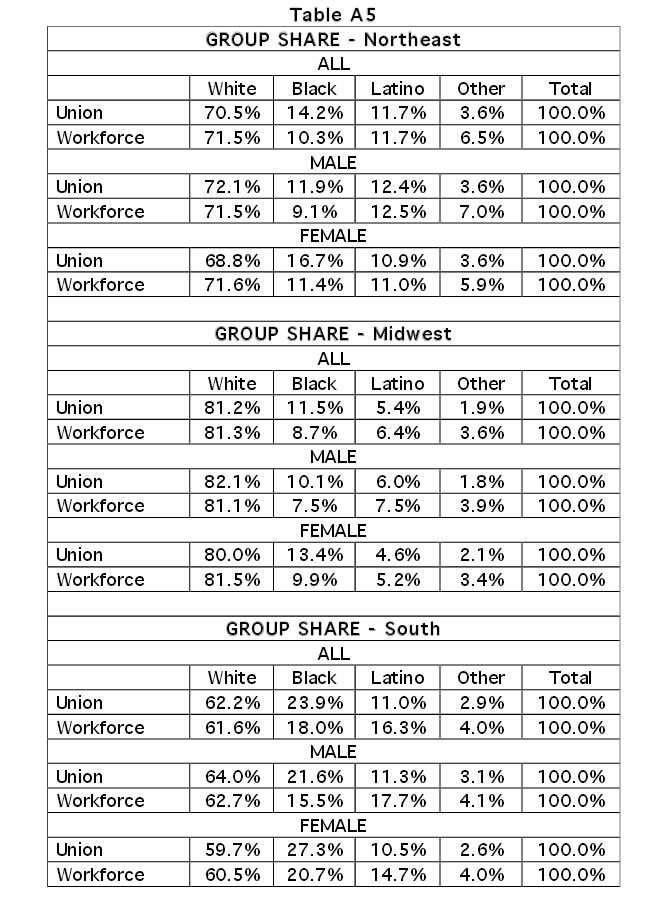 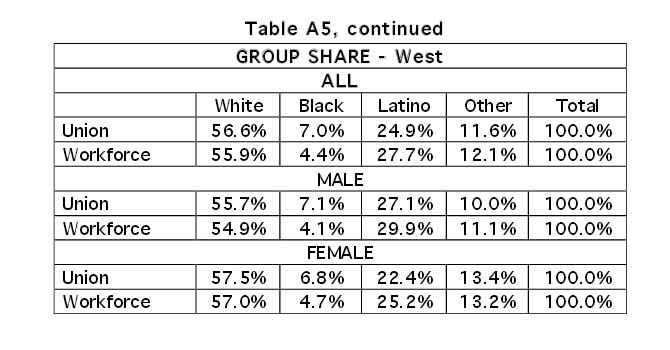 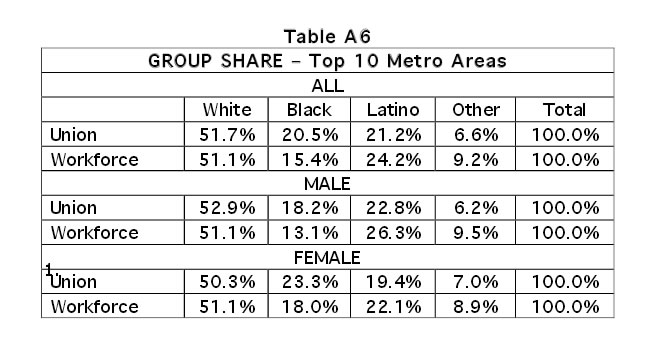 [1] The author wishes to thank the Economic Policy Institute for the use of their data and Sylvia Allegretto (UC Berkeley Center on Wage and Employment Dynamics) for her assistance in obtaining and analyzing the data.

[4] The data is based on the author’s analysis of the Current Population Survey Outgoing Rotation Group microdata. In contrast to the analysis presented in the BLS report where White, Black, Other, and Latino are not mutually exclusive categories, this brief creates categories that are mutually exclusive. Hence, while the terms Black, non-Black, White, Other will be used for expository clarity, the categories are actually, non-Hispanic Black, non non-Hispanic Black, non-Hispanic White, and non-Hispanic Other. In addition, the weights used in this data set vary somewhat from those used by the BLS; therefore, there are minor variations between data reported here and data reported by the BLS.