The State of California is in a severe fiscal crisis. The State faces difficult decisions in closing an estimated $20 billion budget gap for Fiscal Years 2009-2010 and 2010-2011. How the state chooses to address this gap will have important implications for employment and the economy.

While most measures to reduce the deficit can be expected to further depress the state economy in the short term, the magnitude of that impact will vary significantly based on the specific measures adopted. State policies have a greater or lesser stimulative effect on the economy depending on their ability to promote immediate consumption of local goods and services, as well as the degree to which they bring in federal matching dollars.

One way to compare the economic impact of California’s budget solutions it to calculate economic output multipliers, which tell us how much spending cuts or tax increases will impact the state’s economy. Low-income residents spend a greater share of their earnings and spend more locally than do higher income residents. For this reason, the multipliers for CalWORKS and In-Home Supportive Services (IHSS) are particularly high since most of the funds go to low-income families,1 while the multipliers for tax cuts to upper-income taxpayers are relatively lower.2 Additionally, certain health and human services programs also bring in significant federal matching dollars which serve to further stimulate the California economy. The impact on employment also varies significantly based on the specific measures. IHSS cuts have a particularly large employment impact because 85 percent of program funds go directly to paying the wages for the approximately 360,000 IHSS workers, whose average wage is $10 an hour. 3 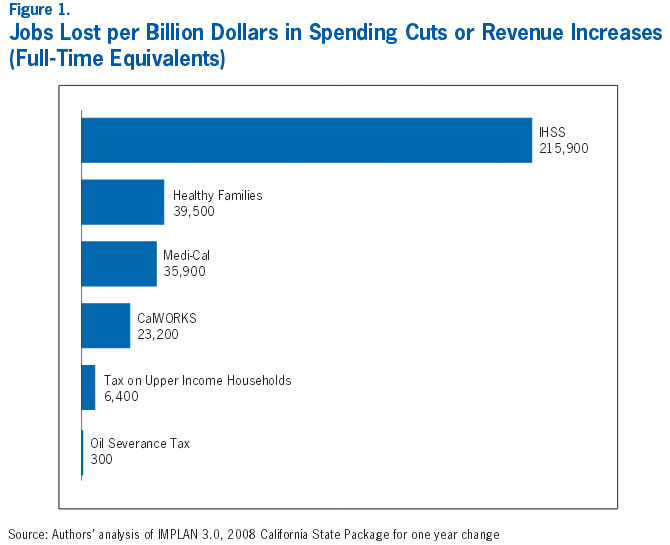 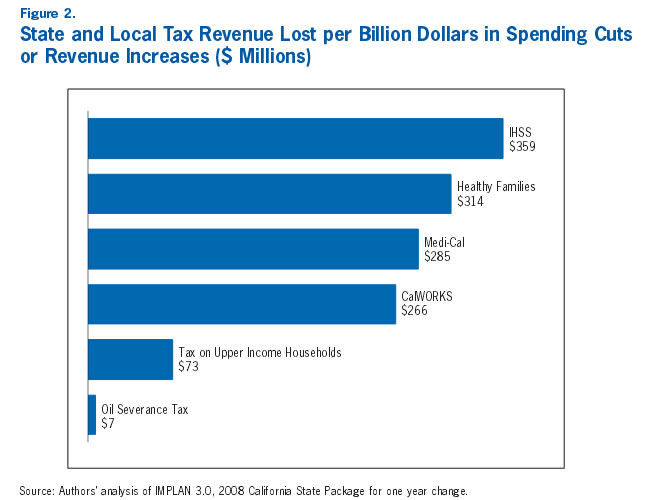 When it comes to employment and economic output, all options for closing the budget gap are not equal. Cuts to programs with large federal matches will have a much greater impact on the state’s economy than many measures that could be used to increase revenue.

Thus, a $1 billion cut to Medi-Cal or Healthy Families would result in the loss of 35,900 and 39,500 full-time equivalent jobs respectively, whereas raising $1 billion in taxes from households in the highest income bracket in California would result in the loss of only 6,400 jobs. This large difference is driven cumulatively by two factors. First is the fact that the health-care industry is highly localized, in that business-to-consumer interactions must occur face-to-face and that hospitals and physicians purchase most of their “raw materials” (intermediate goods) from within the state. Also a relatively large share of health care industry spending flows to wages (as opposed to capital), thus more income is spent at home in California. The second major factor is the loss of federal matching dollars. In regional economic analysis, federal dollars that flow to California can be thought of as an export, in that new dollars are brought into a system that are then spent again and again by local residents, businesses, and workers.

The effects of cuts in social service programs would go well beyond the impact on jobs. Cuts to Medi-Cal and Healthy Families would result in delays in necessary care for adults and children, greater use of uncompensated care and emergency room visits, and a higher number of nursing home placements among elderly and disabled Californians who want to remain at home.

All of these estimates are for a one-year change. The main effects of an oil severance tax would take place over a 20- to 40-year time horizon and are projected to be relatively small.6

Along with the immediate economic impact, budget measures may also affect the state’s ability to attract skilled workers and firms. Transportation infrastructure has been found to play a significant role in firm location decisions. Empirical research on the effect of business taxes on business location is mixed. Overall, taxes have a small effect on which state or region a firm decides to locate in. The greatest effects, whether positive or negative, are seen where taxes are significantly divergent from the norm. Taxes play a greater role in firms’ location decisions within a state or region than between states and regions. This trend is more pronounced for manufacturing activity than for commercial activity. Educational opportunities and crime rates play a larger role in states’ abilities to attract skilled workers.7, 8

With an unemployment rate of 12.5 percent and nearly 2.3 million Californians out of work,9 the Governor and State Legislature should take care to minimize the negative impact of the budget measures on employment.

To determine the economic impacts of each of the budget options we used IMPLAN 3.0 modeling software (using 2008 California state data) which generated the projected impacts on employment, economic output, and state and local taxes. To model the CalWORKs and indirect and induced IHSS impacts we treated the spending as household income. We allocated across four different income groups following the methodology of Haveman and colleagues (2009).10 To determine the direct employment impact of IHSS we took the total paid Individual Provider hours for 200911 and divided by 2,080 hours to convert to full-time equivalents.

To model Medi-Cal and Healthy Families, we treated the funding as flowing to a set of IMPLAN industry sectors rather than households. We distributed the total budget amount, including the federal match across five health care related IMPLAN sectors. We weighted the distribution of these funds across these five sectors according to the relative share of economic output in the state of California in 2008.

To evaluate a tax on high-income households, we followed an approach similar to our approach for CalWORKS and IHSS by analyzing $1 billion in reduced household income for families earning more than $150,000 a year, which is the highest category in IMPLAN.

Finally, for the oil severance tax we followed the State Assembly Analysis for AB 656 estimate that $1 billion in revenue would require a 6.25 percent severance tax.14 We used the average one-year price elasticity of supply for oil production from Sterner (1992), of 0.052.15 We modeled this figure using IMPLAN industry sector 20, “oil and natural gas extraction.” Estimates for long-term price elasticity of supply range from 0.162 to 0.85. Using the long-term elasticity produces job impacts well below each of the other budget options tested.