California’s successful implementation of the Affordable Care Act (ACA) resulted in historic increases in health insurance coverage. Over one million Californians have subsidized insurance through Covered California, the state’s ACA marketplace. The state’s Medicaid program (Medi-Cal) now covers approximately one out of three Californians, millions more than prior to the ACA. 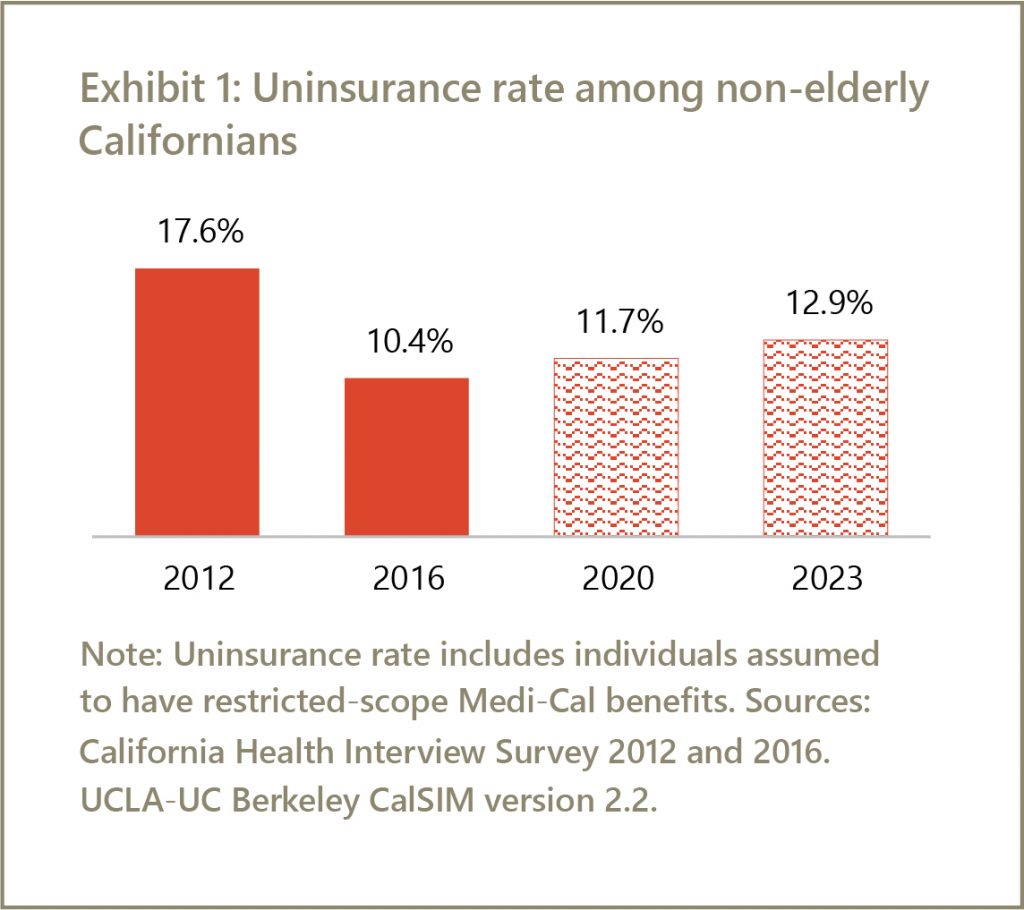 Despite this success, 10.4 percent of non-elderly Californians (those under age 65) lacked insurance in 2016. Without state action to protect and build upon these coverage gains, we project that the uninsurance rate could grow to 11.7 percent in 2020, or approximately 4.02 million people, and to 12.9 percent in 2023, or 4.4 million people. These rates are based on a definition of insurance that excludes restricted-scope Medi-Cal for undocumented Californians.

The federal law zeroing out the ACA individual mandate penalty beginning in 2019 will result in lower individual market and Medi-Cal enrollment, but significant uncertainty exists about how much enrollment will decline in California. Using our California Simulation of Insurance Markets (CalSIM) microsimulation model and a range of assumptions about the extent to which the penalty influences enrollment decisions, we project that between 150,000 and 450,000 more Californians will be uninsured in 2020, growing to between 490,000 and 790,000 more uninsured in 2023, compared to the projected number if the ACA penalty had been maintained. The most substantial enrollment changes will occur in the individual market, where we project enrollment will decline by 10.1 percent in 2020 and 14.4 percent in 2023.

Undocumented Californians will continue to make up the largest group of uninsured, and many other Californians who are eligible for coverage—including Medi-Cal, insurance through Covered California, and employer coverage—will also lack insurance. Some Californians will not enroll in Medi-Cal despite being eligible because they are not aware of their eligibility, have difficulty enrolling, or have other reasons for remaining unenrolled. Some individuals eligible for employer coverage or insurance through Covered California, with or without ACA subsidies, will not enroll due to affordability concerns, rising costs, lack of knowledge of subsidies, or other reasons. 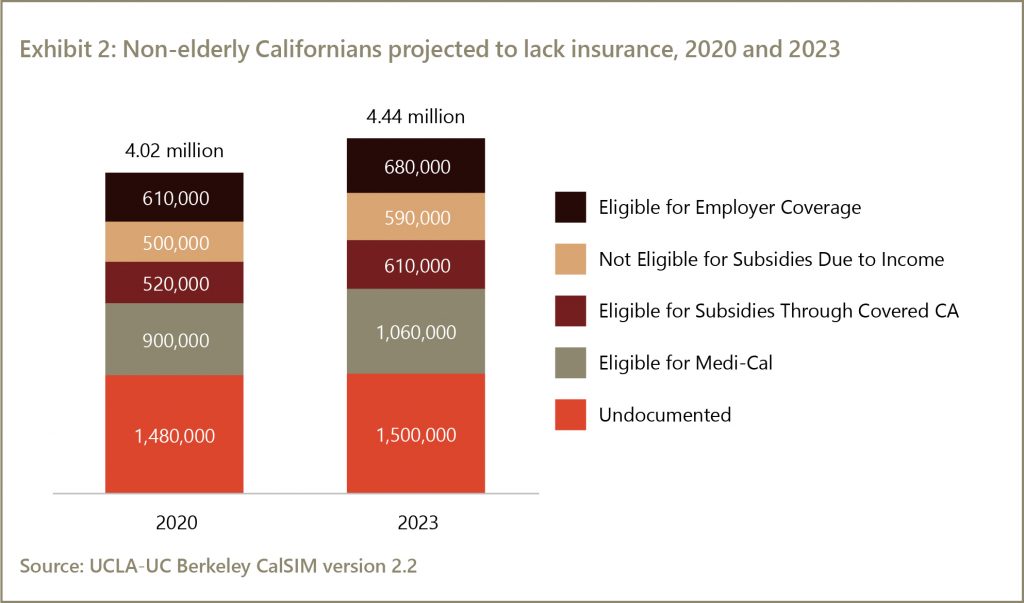 Uninsured Californians are projected to be disproportionately Latino (65 percent) and low income (52 percent at or below twice the Federal Poverty Level) in 2020. More than two-thirds of adults projected to lack insurance are working (69 percent), a rate similar to that in the overall population (73 percent).

The uninsurance rate will vary regionally from a projected 9.9 percent in the Bay Area to 13.9 percent in Los Angeles County in 2020. Variation in uninsurance rates reflect differences in population characteristics, such as immigration status and income, healthcare premiums, and employers’ rates of offering coverage.

To protect the progress made under the ACA in expanding health coverage and to reduce the remaining coverage gaps, the state could expand Medi-Cal to all low-income residents regardless of immigration status, provide state subsidies to improve affordability of individual market premiums and out-of-pocket costs, implement a state individual mandate, and continue to support and strengthen outreach and enrollment efforts, among other strategies. As federal decisions threaten to reverse health coverage gains around the country, these policies would help to ensure that California continues to build on its successes and drive toward its goal of achieving universal health coverage.