California’s 2021-22 budget will have an enormous impact on the nature of California’s recovery from the COVID-19 pandemic. The Governor’s 2021-22 budget proposal would restore some critical funding for public health and education, but it will not be sufficient to get California’s economy and low-income Californians back on track. To avoid a prolonged economic downturn, and further damage to California’s most vulnerable residents, California needs to make a much more significant investment in the drivers of economic growth. Those investments will require closing tax loopholes and shoring up revenues in the coming years.

Californians have repeatedly voiced support for policies that support quality jobs and a safety net that keeps people out of poverty. Research by the Labor Center has shown that California’s progressive policies are tied to its economic success. The pandemic has jeopardized this success and thrown millions of families into crisis. While the stock market and high-income Californians are enjoying a robust recovery, many Californians face mounting debt, lost incomes, and devastating health outcomes. These impacts will not reverse themselves without public investment, as we learned from the Great Recession. Significant spending cuts in California after 2008 led to the slowest recovery in history, characterized by wage stagnation, precarious work, and deepening inequality. The choices we make this spring will shape the legacy of the pandemic; it’s more important than ever for California to make bold choices and be a model for equitable recovery.

While the news is full of optimism about vaccines, unexpectedly stable state revenues, and long-overdue federal stimulus, there are several looming risks to California’s recovery. The past year has revealed the dangers inherent in an under-resourced public sector. After decades of underfunding public health, vaccination rollout and PPE distribution staggered under logistical challenges, further prolonging the pandemic’s damage. California’s poorly funded schools have struggled to manage the costs of preparing for reopening, getting technology to students, and retaining staff to support students. As in many states, California’s unemployment insurance (UI) system has struggled to get billions of dollars to out-of-work Californians. Hospitals and schools face staffing shortages that will only get worse.

As the legislature and Governor negotiate the 2021-22 budget, they need to meet several challenges:

We cannot afford to repeat the mistakes of the Great Recession

California entered the pandemic in better fiscal shape than before the Great Recession; in 2019 the state had sufficient reserves to weather a mild recession. In January 2020, in anticipation of continual revenue and economic growth, Governor Newsom proposed a $153 billion budget that increased both one-time and ongoing spending on education, housing, and health care, new programs to combat homelessness, and desperately-needed education funding. Then the pandemic hit.

When the impacts of the pandemic began to hit in spring 2020, the Governor’s May Revision became a “workload budget”: it froze most spending at 2019-20 levels, with few exceptions for COVID-related spending. The state ultimately adopted an austerity budget with only $133 billion in general fund spending. The budget made severe cuts to both K-12 and higher education, deferred an  important expansion of Medi-Cal, and eliminated proposed spending on housing and infrastructure.

It now turns out that the 2020-21 revenue projections were overly pessimistic. The adopted budget projected that revenues would drop by nearly $15 billion from 2019-20. Instead, revenues are on track to exceed 2019-20 revenues, nearly matching the projected revenues in the Governor’s January 2020 proposal. The legislature has already restored some of the cuts made in 2020-21 effective July 2021, but these don’t address the scale of revenue loss and cost increases.

In December 2020, California officials estimated that this “windfall” could amount to $26 billion, driven by the wealth increases and stable employment of higher-income Californians. But despite the projected surplus for 2021-22, the budget forecasts deficits for the coming three years, through the 2024-25 fiscal year. The Governor also projects that state job losses will not return for half a decade; the Congressional Budget Office (CBO) projects the U.S. economy will not recover 2020 job losses until 2024. The Great Recession had its most severe fiscal impacts in the few years after it began. We need to be planning ahead to prevent long-term damage to our economy and to California families.

It’s important to emphasize that California is not enjoying a “windfall;” we are on track to match non-pandemic revenues for 2020-21, and projected to lose revenues after that. This is not the time to be complacent about the inadequacy of our revenue base for sustaining long-term recovery.

California was one of the most severely impacted states during the Great Recession. Credit ratings agencies flagged California cities as high risk for municipal bankruptcy. Like most states, California saw record job losses in the public sector, deteriorating levels of public infrastructure and services, and years of compromising on California’s commitment to an equitable economy. As we wrote in October, the state’s economy had barely recovered by 2019, and by many measures (job quality and public sector employment) the economy was more vulnerable in 2019 than in 2007.

Studies of the impacts of the Great Recession confirmed the importance of avoiding austerity measures to prevent long-term economic damage. Research from the Great Recession demonstrated that short-term labor markets have a stronger impact on long-term outcomes  than previously understood. An analysis of job recovery in 50 states from 2008-2013 found that states that cut their public-sector workforce had deeper job losses overall and in the private sector. EPI found in 2009 that for each dollar of budget cuts, more than 50% of the jobs and economic activity lost will be in the private sector.

In 2010, the Labor Center found that cuts of 261,000 jobs in health and human services would result in $21 billion in lost economic output, and $1.3 billion in state and local tax revenue. Close to 25% of the savings from those job cuts would be negated due to loss in economic activity.

n 2018 dollars, the loss of 100,000 state and local jobs matching the distribution of actual job losses from 2008-2013 have an economic multiplier effect of 1.51: that is, for every state or local job loss and additional .51 jobs are lost in the rest of the economy. This represents $10.4 billion in direct income loss, and more than $3 million in income loss induced by reduced consumer spending. 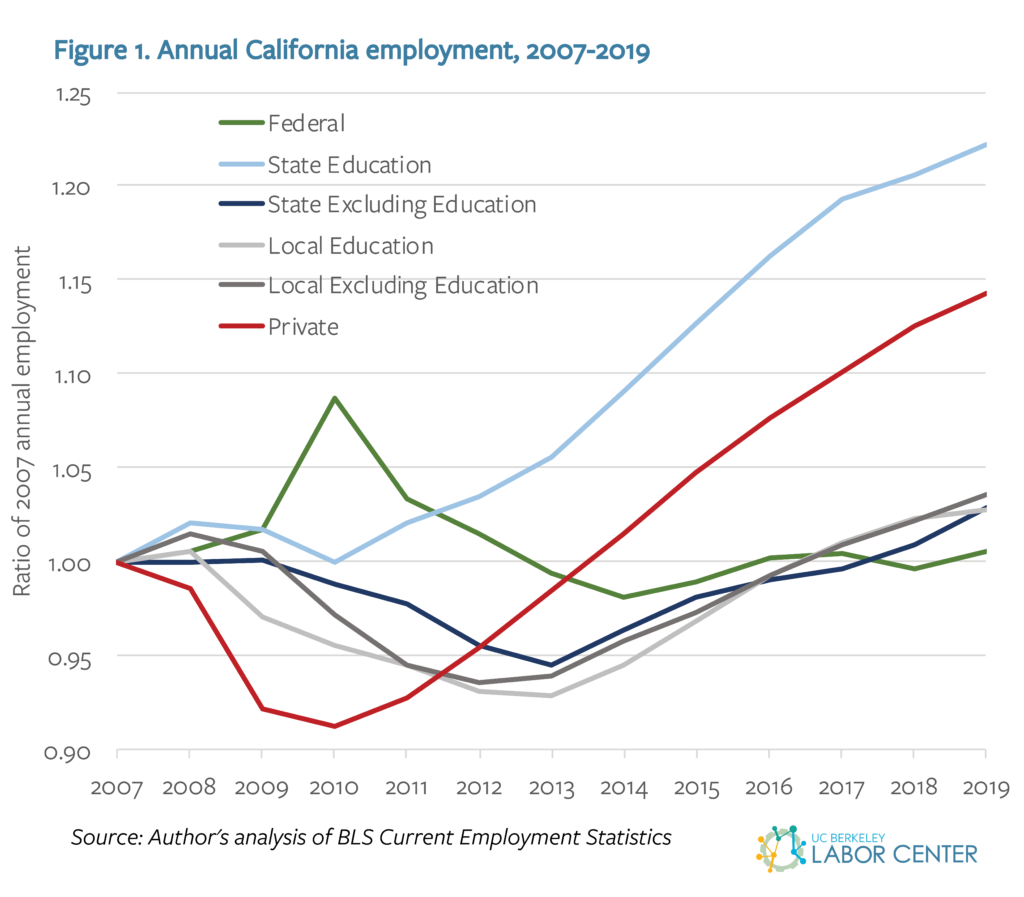 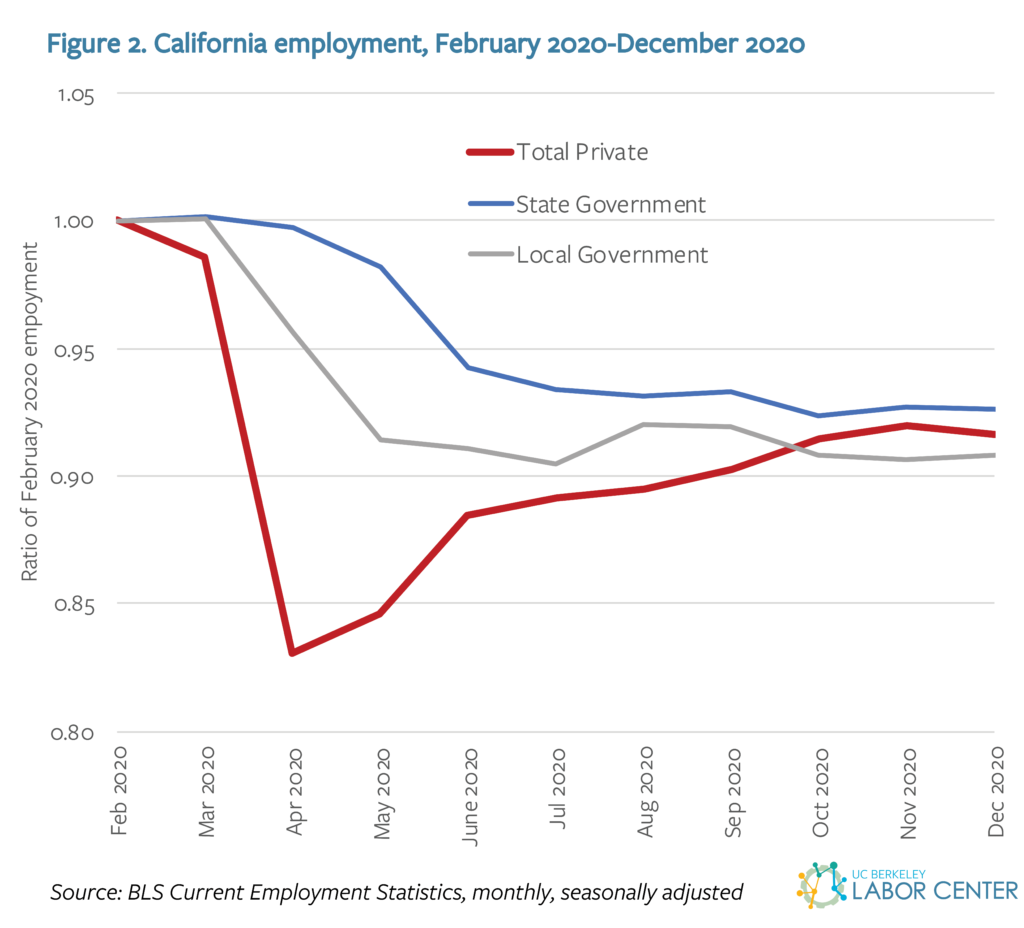 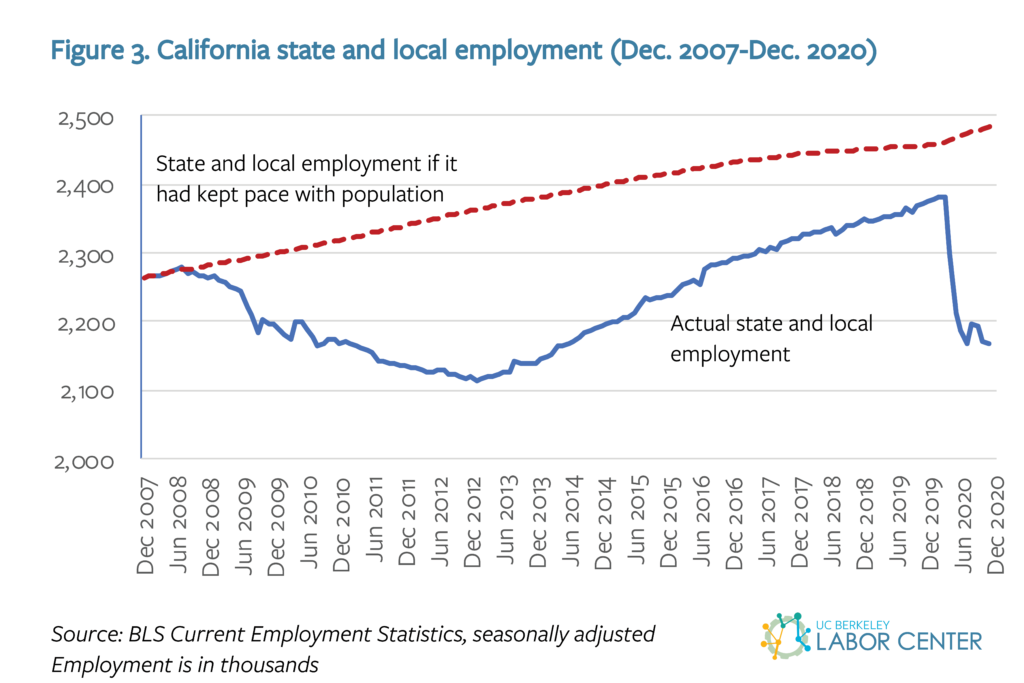 California must invest more in education and health

Quality education from early childhood through high school graduation is not only a vehicle for individual opportunity and economic security, it is central to the economic resilience and innovation of our state. By any measure, California significantly underfunds education relative to other states. In 2020, Stanford researchers estimated that it would take $25.6 billion in additional funding to permit local districts to meet the state’s own educational goals.

Understanding the trends in per-pupil funding can be challenging, because many mandated costs for districts have risen much faster than inflation, requiring greater funding levels from the state just to maintain spending. For example, beginning in 2014, the annual percentage increases to state allocations have hovered around 1-2%, while just one mandated expense, contributions to CalSTERS, will double from 8.25% to 19.1% by 2023. Escalating expenses for special education have also far outpaced funding increases from the state—an estimated 20% in real dollars, which local districts have had to absorb.

California’s staffing levels also lag behind the nation: the number of students for each full-time equivalent teacher was 20.9 in 2007-08, before the Great Recession began. In 2017-18, the last year data is available, it was 21.1, after reaching a peak of more than 23 in 2010-11. Pupil-teacher ratios in California are now the highest in the nation; the national average is 16. In 2007, PPIC estimated that it would cost $15 billion annually for California to match staffing ratios in other states. This underinvestment is despite California’s higher needs population and could be driving California’ s lower educational outcomes. Nearly 20% of California students are English Language Learners, the highest in the nation (and nearly double the national rate of 10%). California’s high school graduation rate is 83%, below the national average. 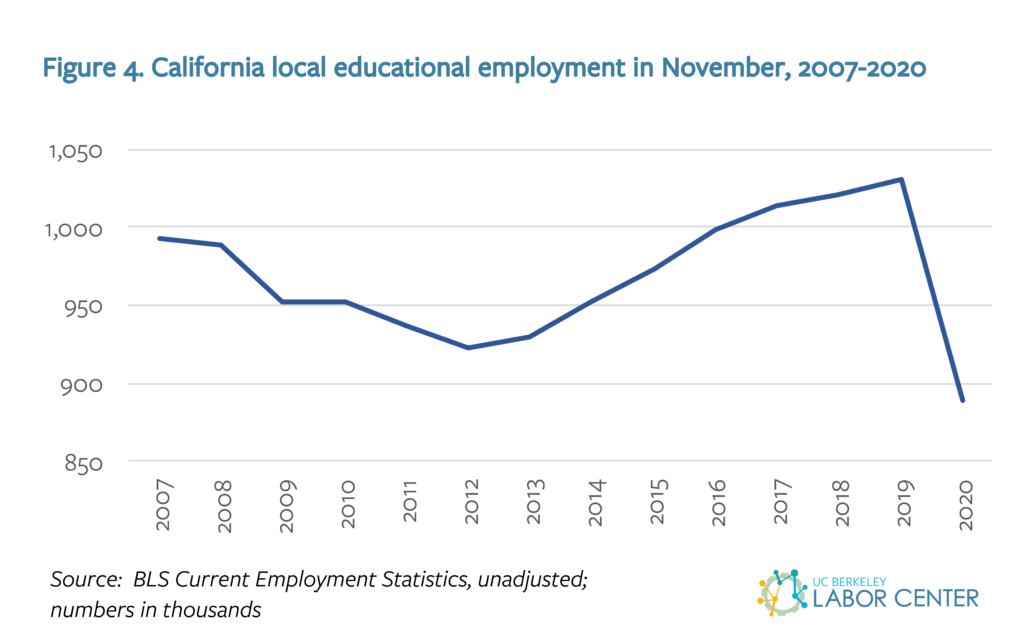 The state’s formula for funding education leaves districts facing uncertainty and issuing thousands of layoff notices every budget cycle. School districts are dependent on annual supplemental appropriations from the budget to sustain basic services, as Proposition 98 funding has fallen well behind what districts need just to meet state and federal mandates.

The Centers for Disease Control and National Education Association have estimated that schools will need billions to open safely and address the consequences of a year of interrupted and remote learning for students, beyond the PPE and supplies covered by federal relief funds. California’s share of these estimates would be $4.3 billion for smaller class sizes, $334 million for transportation, $471 million in technological support, and $297 million to resume before and after school care.

California has made substantial gains in expanding health coverage under the Affordable Care Act, but 3.5 million Californians lacked health insurance even before the pandemic and many Californians struggle to afford their insurance premiums and care, problems which are even more severe under a pandemic and recession. Latinos and low-income Californians disproportionately lack coverage and face health care affordability concerns. Adopting a system that provides health coverage to all Californians under a single program, as is being examined by the Healthy California for All Commission, would be the most comprehensive way to address these gaps. Before COVID, many California policymakers had already identified the need for near-term investments that would move us closer to achieving the goals of improving health care access and equity such as:

While plans for an effective COVID public health response are continually evolving, it is clear that substantial investment will continue to be required in the next budget year, and perhaps beyond. In the Governor’s January budget proposal, he proposed to spend over $820 million General Fund related testing and tracing and other public health responses and set aside $372 million as an initial investment in vaccine distribution which can be accessed immediately. The Governor intends to provide $1.2 billion from the December 2020 federal relief package to local health departments for testing, tracing, and vaccinations but it is not yet known how the remaining federal funds will be allocated. It remains to be seen whether the proposed funds will be sufficient for effectively addressing the spread of COVID.

A strong public sector supports strong economic recovery. Budget cuts that put people out of work and constrain their incomes come with costs—induced job loss throughout the economy, lower tax revenues, and higher program costs. Cuts to public spending don’t just impact the workers who lose their jobs; they ripple throughout the economy. Public spending circulates through the economy as transfer payments (e.g., Medicaid benefits, food stamps, and TANF), grants, and contracts. Nearly a third of direct state spending supports jobs in the private sector.

Most public sector infrastructure projects are performed by private firms, who contract with the government and in turn hire subcontractors. The supplies made for those projects are also tied to private sector jobs. Thousands of California’s private sector workers are dependent on public funding, even if they aren’t aware of it. Many other public sector workers perform their jobs using supplies produced by the private sector: fire trucks, instructional materials, buses, and computers.

During a recession, public budget cuts can hamper economic recovery. State and local austerity—driven by balanced budget requirements, plummeting revenues, and increased demand for services—was particularly widespread after the Great Recession, and is particularly damaging given that 89% of California’s public sector jobs are in state and local government. Economists studying the Great Recession found that austerity was more damaging than previously thought, and that avoiding austerity was as important as stimulus measures.

How we can rebuild California better

Inadequate public investment now will cement the inequality in the labor market that has characterized both the past decade and the past year, and harm California’s long-term economic recovery. Addressing these challenges requires bold policies and more spending.