HomePublicationsBlogCalifornia could lose 269,000 jobs if the ACA is overturned

On November 10, the Supreme Court is scheduled to hear oral arguments in the case California v. Texas, one possible outcome of which is the Affordable Care Act (ACA) being struck down in its entirety. Under that scenario, 4.5 million Californians could lose their Medi-Cal coverage through the ACA expansion or subsidized insurance through Covered California, and millions of Californians could lose the ACA protection against being denied coverage or charged higher premiums due to a pre-existing condition. Overturning the ACA would reduce annual federal funding to California by $28.8 billion in 2022, the year of focus for this analysis. 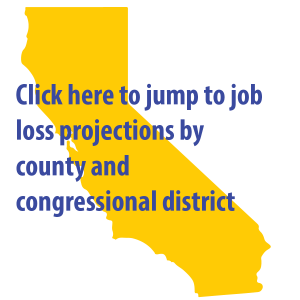 Many Californians’ jobs are also at stake should the ACA be overturned. California would be projected to have 269,000 fewer jobs, $29.3 billion less in state GDP, and $2.2 billion less in state and local tax revenue, compared to if the ACA remains in effect. These projections are based on analysis using IMPLAN economic modeling software. Click on the map image below to view tables showing projected job losses in 2022 for California’s medium and large counties and all congressional districts.

These economic losses would come at a time when California’s economy is likely to still be recovering from the massive job losses incurred due to COVID-19. Statewide, the projected job losses with elimination of the ACA would be equivalent to a 1.4% decrease in employment (if the California labor force is 19.1 million in 2022, in line with national Congressional Budget Office labor force projections). This job loss would be on top of the 6.6% unemployment rate projected by the UCLA Anderson Forecast for California in 2022.

Most of the lost jobs—159,000 or 59%—would be in the health care industry, including jobs at hospitals, clinics and doctors’ offices, labs, other health care settings, and insurance companies. The projected loss in health care jobs reflects the elimination of some jobs that exist today, as well as the creation of fewer new jobs due to slower-than-expected job growth.

Employment in non-health care industries would be reduced by 110,000 jobs due to economic spillover effects. In particular, job loss would be most likely to occur at businesses that are suppliers of the health care industry, such as food service, janitorial, and accounting firms, and at local businesses at which health care workers spend their income, such as retail stores. This analysis is based on pre-COVID industry and household spending patterns. If spending patterns in 2022 continue to be significantly altered due to COVID-19, the economic impacts would be somewhat lower than shown here but the differences would be small. (See methodology for more details.)

These numbers reflect a net loss of 269,000 jobs. The projected loss of jobs due to the eliminated health care spending (-293,000 jobs) would be minimally offset by economic gains from the repeal of certain ACA taxes, which would keep an estimated $6.2 billion within the state and add new jobs (+24,000 jobs). The vast majority of these tax cuts would go to the highest-income households, and the additional income for these households and certain corporations would result in some increased spending and additional jobs. The impact is limited, though, for two reasons: the value of the tax and penalty repeals is substantially less than the value of the health care spending cut, and health care spending cuts have a more severe impact on jobs than equivalent tax increases.

These estimates assume that California is unable to backfill the loss of federal funds if the ACA is overturned. The potential loss of nearly $29 billion in federal investment in 2022 is enormous in the context of the state budget. To put this amount in perspective, it is similar to the $29 billion in total projected state spending on Corrections and Rehabilitation and Higher Education (University of California, California State University, and Community Colleges) combined in 2020-21.

If the ACA is overturned, not only would Californians fear losing their health coverage, they would also have good reason to worry more about losing their jobs.