Each of the major new health reform proposals in California includes fees for employers who spend less than a specified amount of total payroll on healthcare. In order to understand the impacts of these policies, it is important to look at the current patterns of healthcare spending as a percent of payroll in California. Of particular interest are those workers without any health coverage and the healthcare spending patterns of their employers.

The following tables and charts describe the amount California employers spend on healthcare as a percent of total employee payroll. The information is for private industry firms –government and self-employed workers have been excluded –during the 2005 year, the most recent year for which all relevant data is available. The methodology used is described at the end of the report.

California private sector employers contribute to employee healthcare at a rate of 6.9% of total employee payroll, and 7.9% of Social Security wages (capped at $97,500). These rates include all workers, whether or not they have health coverage through their own employer (Table 1). Employer spending on healthcare as a percent of payroll is lower in California than in the United States as a whole. There are two reasons for this: California median wages are higher than the national average, while the share of workers with employer-based coverage is lower.

Though not shown in Table 1, when firms with fewer than 10 employees are excluded, the employer contribution rate increases to 8.2% of Social Security wages (since small businesses tend to contribute less to healthcare).

Next we look at firm spending on healthcare as a percent of payroll only for those workers who have coverage through their own employer (Table 2). We find an average contribution rate of 9.6% of payroll on all wages, and 11.2% on Social Security wages. These averages reflect both higher employer contributions per worker as well as higher pay, since employees with health coverage tend to earn more than those without. 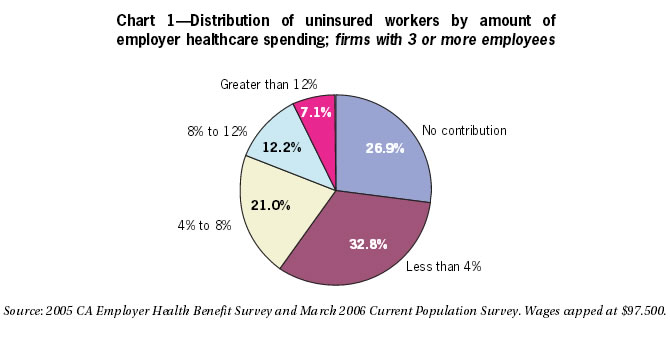 As we have seen, among uninsured employees in firms of ten or more, the vast majority work in firms that make some contribution to health care. Any en lieu fee based on employer health spending as a percent of total payroll will fall disproportionately on smaller firms, which are less likely to offer coverage to any employees, as opposed to larger firms, which are more likely to provide coverage to a part of their workforce, even while they have significant numbers of employees who are not eligible for coverage. In order to make the fee binding in closer proportion to the distribution of uninsured workers, policy makers should consider fee structures tiered by business size, structures based on spending on individuals rather than total payroll, or both.

In addition, we find that eligibility requirements are the primary cause of uninsurance for workers in firms of three or more. Workers may not be eligible for coverage for several reasons, including that they may not have been on the job long enough to qualify for coverage or they may work too few hours. In the recent case of the unionized Southern California grocery industry, we found that eligibility for coverage had declined from 94% to 66% between 2003 and 2006, mainly as a result of longer waiting periods.[1] In assessing policies geared towards uninsured workers, attention should be given to workers less likely to be eligible for coverage, including those new to the workforce and part-time workers.

This describes how we determined the amount employers spend on healthcare as a percent of payroll. The information is for private industry firms during the 2005 year.

Information on how much employers contribute to healthcare was obtained from the 2005 California Employer Health Benefit Survey (CEHBS). The sample contains information on 846 employers, representing the entire private sector in California. Each firm surveyed reports the average monthly amount the employer spends on healthcare for each employee receiving coverage. The monthly amounts are multiplied by 12 to arrive at average annual healthcare costs for employees working the complete year. Information on the percentage of employees covered yields the total healthcare spending per employee.

The only wage information gathered in the survey is the percentage of employees earning less than $20,000 per year. This percentage, along with earnings information from the Current Population Survey, was used to calculate the payroll for each employer as described below.

The CEHBS surveys all employers on their healthcare offering, as well as coverage, eligibility and take-up rates for employees. These data were used to generate Table 3.

Earnings information was obtained from the March 2006 Current Population Survey (CPS) Annual Social and Economic Supplement (ASEC). The sample contains earnings information for the 2005 year of 5,905 Californians employed in the private sector. All earnings have been capped at $550,000.

Each worker in the sample was assigned to one of four firm size categories (fewer than 10 employees, 10 to 99, 100 to 999, and more than 1,000 employees) and to one of nine industry categories (mining, construction, manufacturing, utilities/transportation/communication, wholesale, retail trade, financial, services, healthcare) for a total of 36 different size-industry categories.

Finally, 2005 average earnings for workers earning less than $20,000 and average earnings for workers earning $20,000 or more were computed for each of the 36 size-industry categories. Because many in the sample did not work the full 2005 year, earnings were computed based on a 52-week work year. This allowed workers’ earnings from the CPS to represent annual amounts and match the annual healthcare premium amounts from the CEHBS. The percentage of workers earning above and below $20,000 a year for each firm in the CEHBS was adjusted to match the CPS average for that industry size category.

The rate of uninsurance for individuals who did not have employer-sponsored insurance was calculated for each industry-size category using the March 2006 CPS. This rate was applied to workers without employer-sponsored insurance for each firm in CEHBS to arrive at the number of uninsured workers. Appendix II describes two alternative methodologies, which yielded substantially similar results.

Advantages of using employer-based surveys for questions of healthcare eligibility

Offer, eligibility and take-up can also be computed using information from the California Health Interview Survey (CHIS) and the Medical Expenditure Panel Survey (MEPS). The CHIS generates substantially different results than the CEHBS on these particular questions. This is not a surprise. The CHIS surveys individuals, while the CEHBS surveys firms. Firms have greater access to information on the distinctions between offer, eligibility and take-up than individuals, so firm surveys are preferable for this question. The MEPS calculates offer, eligibility and take-up using an employer survey. The MEPS includes firms of all sizes, not only three or more. Using the MEPS for all private sector employers, we find similar results to those in Table 3. The higher “not offer” rate and the lower coverage rate are what we would expect from including micro-businesses.

Benchmarking percent of payroll results to the March 2005 CPS

Employer contributions as a percentage of total payroll can also be determined from the March Supplement of the Current Population Survey (CPS). The March CPS, which is the most common source of earnings data, also contains an “employer healthcare contribution” field which is imputed based on a number of other variables about the worker.

Using alternative methods to arrive at the distribution of uninsured workers

In order to test the robustness our method to determine the distribution of uninsured workers (found in Charts 1 and 2) two other methods were used:

All three methods, as shown in Table 7 below, give very similar results. We infer from this that the distribution of uninsured workers, by percent of payroll, seems fairly robust across different methodologies, if the same data set is used.