If Congress follows through on President-elect Trump’s campaign promise to repeal the Affordable Care Act (ACA), 3.7 million Californians enrolled in the Medi-Cal expansion would lose that coverage, and another 1.2 million individuals enrolled through California’s health benefit exchange, Covered California, would lose federal subsidies to make private health insurance more affordable. These two ACA provisions are the largest drivers of the historic reduction in the state’s uninsured rate from 17.2% in 2013 to 8.6% in 2015.

Not only would repeal of the ACA reverse much of these coverage gains, but California would lose approximately $20.5 billion in annual federal funding for the Medi-Cal expansion and Covered California subsidies. The economic losses associated with these lost federal dollars would be partially offset by limited economic gains from other provisions that may be included as part of the repeal of the ACA, which could yield $6.3 billion in tax cuts to California insurers and high-income households and nearly $1.3 billion in eliminated penalties for uninsured individuals and employers not offering affordable coverage.

In this brief, we estimate the effects on employment, gross domestic product (GDP), and state and local tax revenue in California with the elimination of the major health insurance expansions, reduction in taxes, and removal of penalties under a partial repeal of the ACA. A summary of these estimates is shown in the exhibit below. We also estimate losses for select medium and large counties that would be especially harmed economically by ACA repeal because of their high share of population (more than 10%) enrolled in the Medi-Cal expansion: Fresno, Kern, Los Angeles, San Bernardino, San Joaquin, Stanislaus, and Tulare Counties. 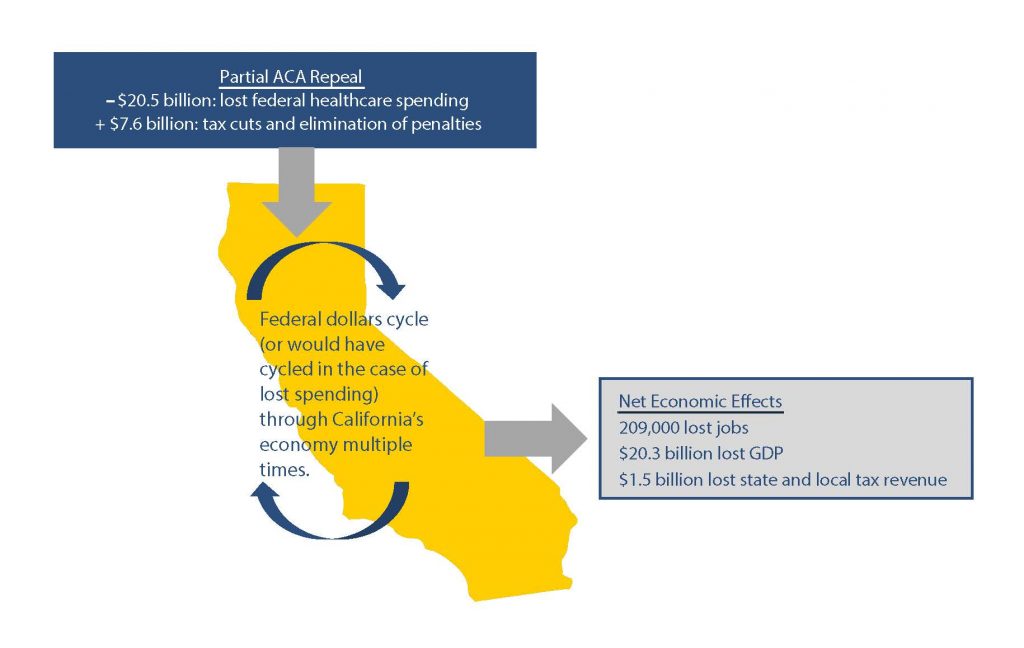