In April 2018, the California State Supreme Court ruling in the Dynamex[1] case established a new legal standard, called the ABC test, for determining if a worker can legally be classified as an independent contractor.[2] Under the ABC test, a business can only contract with a worker as an independent contractor if the work performed a) is under the worker’s control and not that of the business, b) is not part of the company’s core business, and c) is part of the worker’s independent profession.[3] California Assembly Bill 5 (AB 5), signed into law in September 2019, codifies the ABC test in state law and extends its use beyond the wage orders covered in the Dynamex case to unemployment insurance and the labor code, including workers compensation. Under AB 5, workers are assumed to be employees unless all three conditions of the ABC test are met, though the law does specifically exclude some workers from the ABC test; these workers are subject to the Borello[4] test, a less strict standard for determining worker classification that had previously applied to all workers under California state law.[5]

The lion’s share of media attention surrounding AB 5 has gone to the law’s effects on on-demand labor platforms like Uber and Lyft. However, these workers represent just a fraction of independent contractors, most of whom work across a diverse range of occupations such as janitors, hair stylists, and accountants.[6] In this brief, we analyze occupational employment data for California in order to estimate the percentage of independent contractors that will be covered by the ABC test under AB 5, the percentage that will be covered by the ABC test except when strict conditions are met, and the percentage that will be excluded from the ABC test entirely. As explained below, our analysis is restricted to workers who are independent contractors at their main job. We find that the overwhelming majority of these workers are in occupations covered by the ABC test. The small number of occupations where the ABC test does not apply are typically high paying.

To estimate the applicability of the ABC test to independent contractors in California under AB 5, we use data from the American Community Survey (ACS). Since this data source only captures information on the type of work that an individual does at the job where they work the most hours, our analysis is representative of those who do independent contracting as a main job, but leaves out the large number of workers who do such work for supplemental income. From a recent study by Collins et al., we know that a sizable number of individuals combine independent contract work with traditional W2 employment.[7] The ACS data is nonetheless the best snapshot we are able to get of these workers, given the lack of publicly available data sources that include workers who engage in independent contracting for supplemental income.

For our analysis, we divide independent contractors in California into three categories:

1)    ABC test does not apply: Workers in occupations that AB 5 explicitly excludes from the ABC test, such as real estate agents, lawyers, and doctors. These workers would still be subject to the Borello test to determine correct classification.

3)   ABC test applies: Workers in all other occupations.

As shown in Figure 1, we estimate that the ABC test will apply to 64 percent of workers who are independent contractors at their main job; will apply except when strict criteria are met to 27 percent; and will not apply to 9 percent. (See Technical Appendix for a detailed description of our methods). 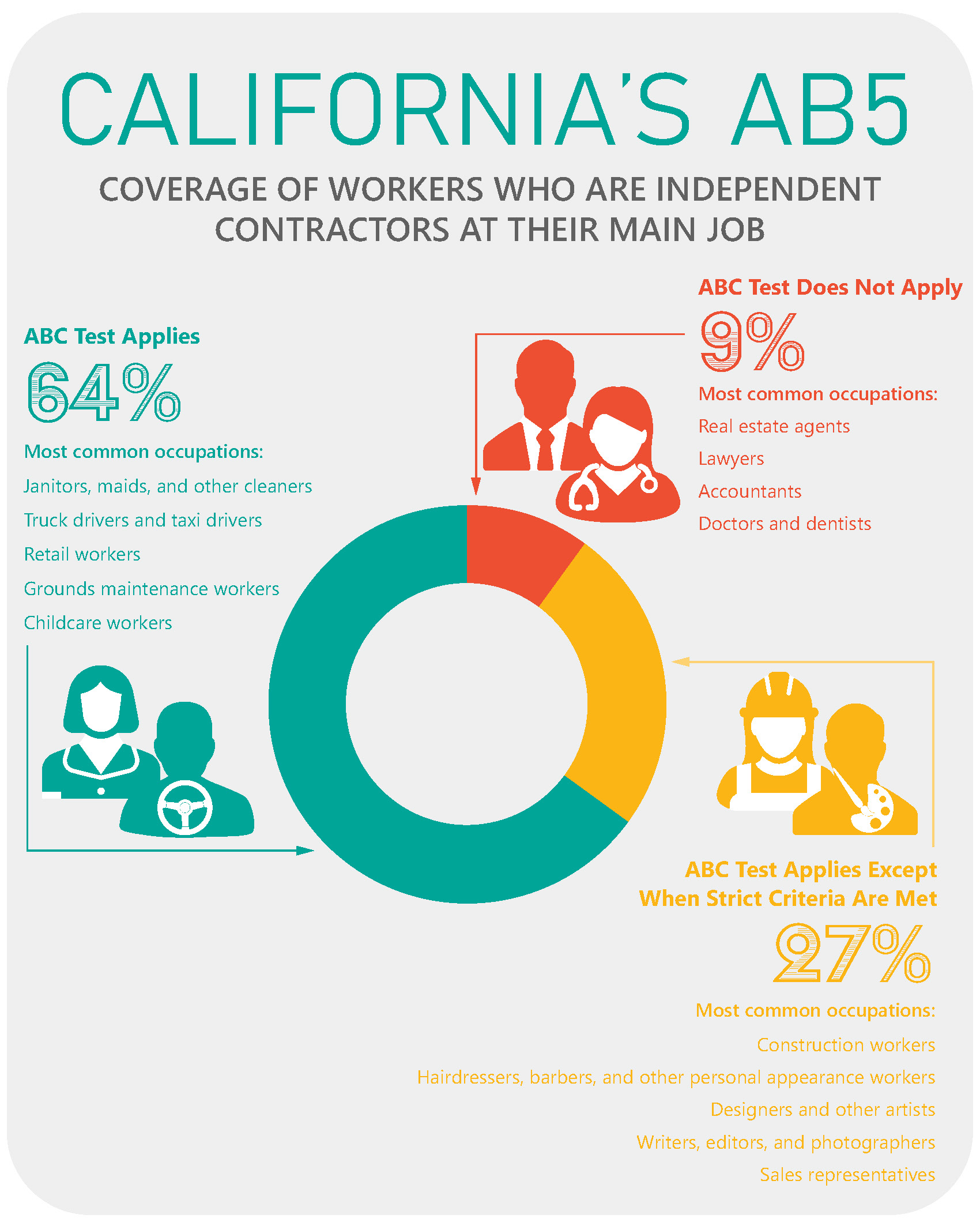 Source: Authors’ analysis of American Community Survey 2017 data and AB 5 legislation.
Note: These estimates only include workers who are independent contractors at their main job and exclude the many workers who earn supplemental income as independent contractors in addition to working a traditional W2 job. The occupations listed are the most common among ACS respondents self-reporting as self-employed unincorporated at their main job.

We use the 2017 American Community Survey (ACS) and limit our analysis to 18-64 year olds who are (1) currently employed, (2) self-employed unincorporated at their main job, and (3) work in California.

In order to assign workers into our three categories (ABC test applies, ABC test applies except when strict criteria are met, and ABC test does not apply), we first compiled a list of occupations that are designated in AB 5 as excluded from the ABC test or excluded under certain conditions. We then identified the occupation categories in the ACS data that most closely matched each occupation as described in the law (see Supplemental Technical Appendix online for a complete crosswalk of AB 5 language and the ACS occupation categories that we used). Next, we assigned workers in the ACS data to one of the three categories based on their occupation. Finally, we calculated the proportion in each category to arrive at our estimates in Figure 1.

All independent contractors working in the construction industry are included in the “ABC applies except when strict criteria are met” category because AB 5 excludes these workers only if a number of conditions are met, such as the worker being licensed as a contractor by the state.

[5] The Borello test for determining employee or independent contractor status primarily considers whether or not a worker has control over the work that they do, and may also consider eleven additional factors depending on the issues involved. See “Independent Contractors versus Employee,” Labor Commissioner’s Office, State of California Department of Industrial Relations, accessed November 1, 2019, https://www.dir.ca.gov/dlse/faq_independentcontractor.htm.

[6] Annette Bernhardt and Sarah Thomason, “What Do We Know About Gig Work in California? An Analysis of Independent Contracting” (Center for Labor Research and Education, 2017), https://laborcenter.berkeley.edu/what-do-we-know-about-gig-work-in-california/.

[8] Although the ACS captures information on self-employment income, we do not consider it to be an accurate measure of earnings due to evidence of high levels of underreporting. See Bernhardt and Thomason, “What Do We Know About Gig Work in California?”

Acknowledgments
The authors would like to thank Annette Bernhardt, Rey Fuentes, Scott Littlehale, and Caitlin Vega for their thoughtful feedback.

The analyses, interpretations, conclusions, and views expressed in this brief are those of the authors and do not necessarily represent the UC Berkeley Institute for Research on Labor and Employment, the UC Berkeley Center for Labor Research and Education, the Regents of the University of California, or collaborating organizations or funders.