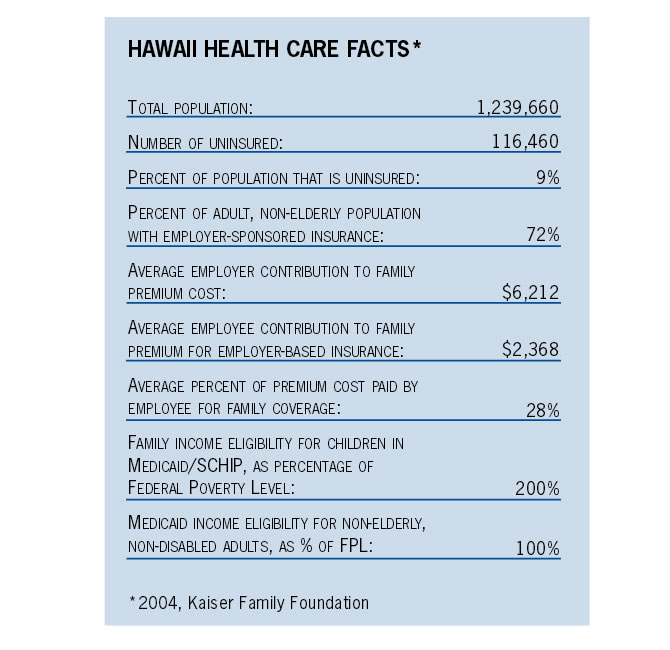 Employer Mandate: All businesses—except government services, seasonal employers, sole propri- etors, and insurance and real estate employers who pay solely on commission—are required to provide employer sponsored health insurance to all employees who work 20 or more hours a week for at least four consecutive weeks. Employers who do not insure their workers are charged $1 per worker per day that they are uninsured in addition to any medical costs the workers incur.

Benefits: Employer sponsored health insurance benefits must be equal to those provided by the plan with the largest number of subscribers in Hawaii.

Cost to employers: Employers may cover the full cost of insurance premiums or may share the cost with their employees. Employers are required to contribute at least 50% of the premium cost for single coverage. If the remaining cost of the premium is more than 1.5% of the employee’s monthly wages, the employer must pay the difference. Employers who are covered by the act and have fewer than eight employees are entitled to subsidies from the Supplemental Fund to defray their costs.

Financing: There is no state subsidy involved in this plan and therefore no cost accruing to the state.

Hawaii’s State Health Insurance Program (SHIP): Offers bare-bones coverage for individuals whose incomes are too high to qualify them for Medicaid but who make less than 300% of the Federal Poverty Level (FPL).

Hawaii has a disproportionate share of workers who work fewer than 20 hours a week. This could be due to the act’s requirement that employers cover only employees who work more than 20 hours a week for four consecutive weeks. It is not clear whether employers have shifted to part-time work to avoid the obligation of offering health insurance, or whether employment was always disproportionately part-time.