This is the fourth post in the Labor Center’s blog series “Rising Health Care Costs in California: A Worker Issue.”

Over the last ten years, the cost of job-based health coverage–premiums and annual deductibles–has climbed steeply in California, while wages for the typical worker haven’t grown at all after accounting for inflation.

Premiums have grown substantially while typical wages have not budged

Since 2008, premiums for job-based family health coverage in California have grown by 49 percent on average, based on data from the California Health Care Foundation’s 2019 California Employee Health Benefits Survey of private firms. At the same time, real median wages have stagnated.* 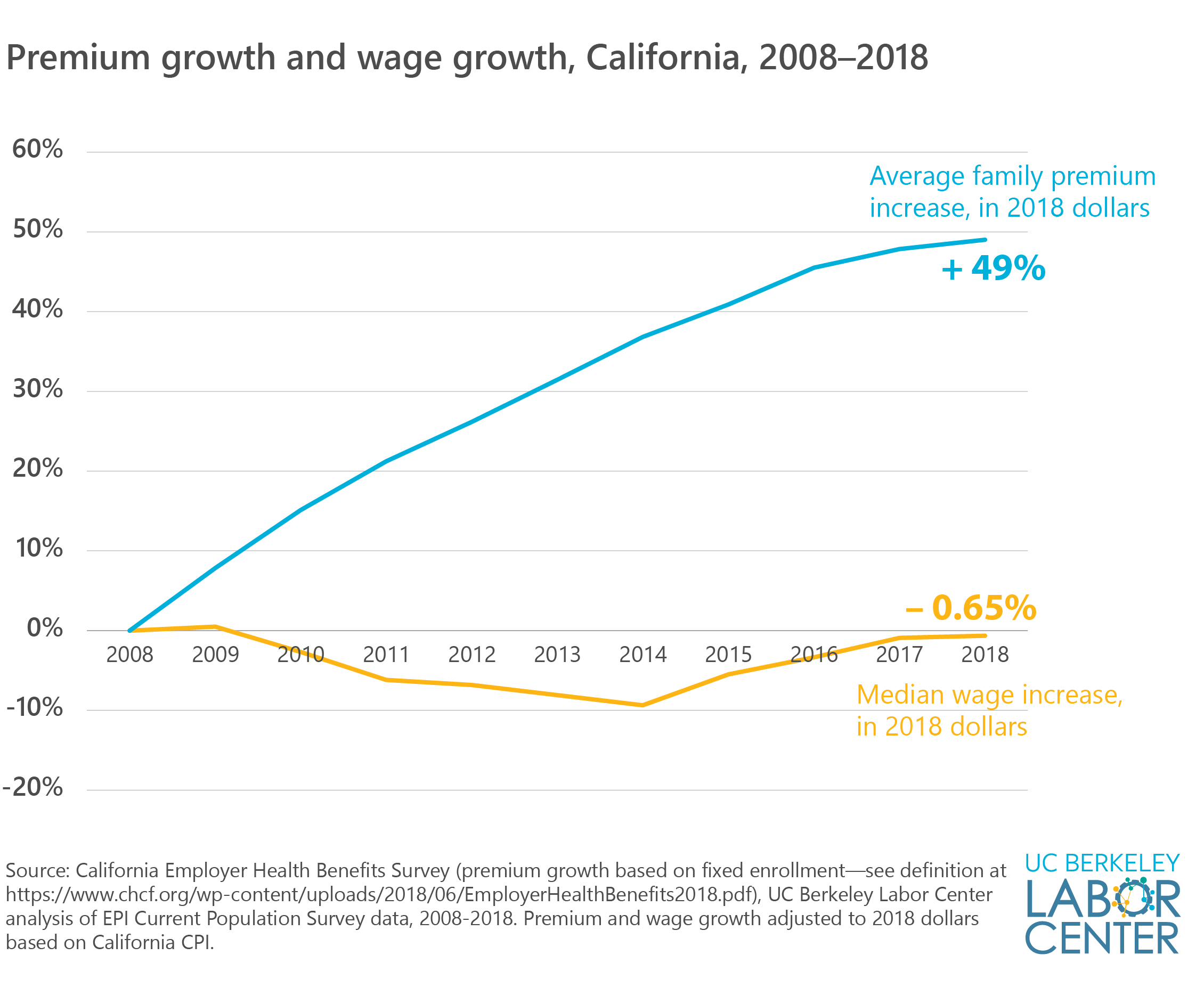 The rapid growth in premiums for job-based coverage has yielded premium costs that are high relative to wages. This in turn means that health benefits comprise a significant share of total compensation for workers with job-based coverage. In California, single coverage premiums averaged $8,712 per year in 2018, equivalent to $4 per hour for someone working 40 hours per week. For family coverage, the average premium was $20,843, equivalent to $10 per hour worked for a full-time worker—just two dollars less per hour than California’s current $12 minimum wage for employers with more than 25 workers. For those working fewer than 40 hours per week, the hourly cost of health benefits is even greater. (In a future blog post, we’ll further discuss the research on the relationship between rising health care costs and wages.) 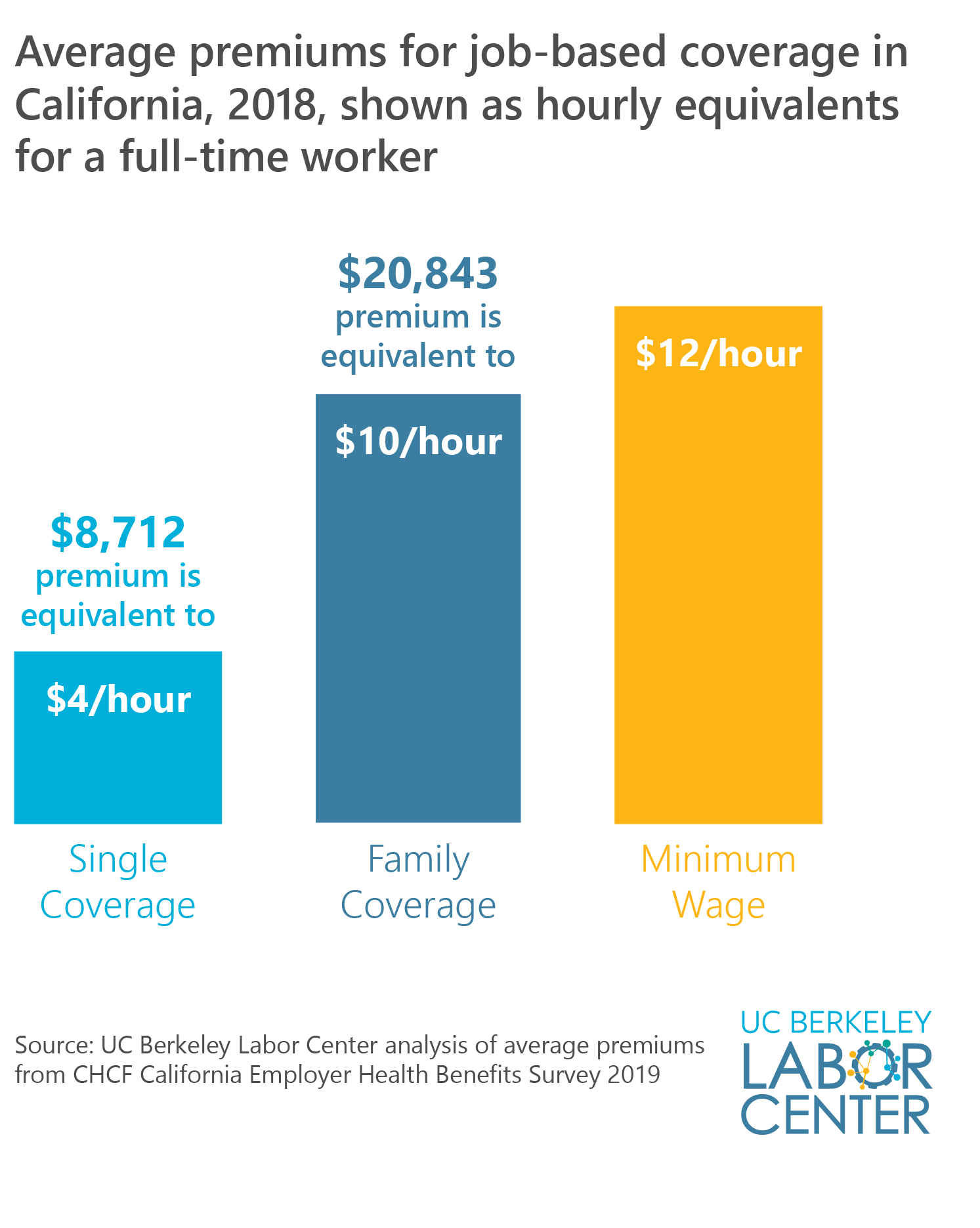 Total premium cost is generally shared between employers and employees, with workers paying an average of 14 percent of single premiums and 27 percent of family premiums. As we’ll discuss in a future blog post, the employer contribution to premiums is part of workers’ total compensation that could otherwise be going to wages or other benefits. In other words, even though workers don’t see the whole premium, it still affects them.

While high premiums present potential affordability challenges for all workers with job-based coverage, 46 percent of covered California workers in single and family plans face the additional challenge of having an annual deductible, according to the 2019 California Employer Health Benefits Survey. Many workers with no deductible have also faced increased out-of-pocket costs over time, such as higher co-payments, but in this post, we focus on deductibles because deductibles are easy to compare across plans and can especially hinder affordability. Individuals with deductibles are more likely to face difficulty affording care or problems with medical bills than those without deductibles, as we will describe in a future post.

The percentage of covered workers with a deductible is significantly lower in California than nationally (82 percent of those with single coverage in the U.S. have a deductible), likely due in large part to Californians’ high level of enrollment in HMOs, a plan type that is less likely to include a deductible than high-deductible plans or PPOs.

In health plans with a deductible, workers are responsible for paying the full cost for some or all types of care until their spending during the year reaches their deductible, at which point the insurer begins to pay a share of costs and the worker pays copayments or other forms of cost sharing. Among California workers with a deductible, the average deductible amount was $1,402 for those with single plans and $2,706 for those with family plans in 2018. Average deductibles in California have increased 84 percent for single enrollees and 77 percent for those with family coverage since 2008, after accounting for inflation. The proportion of workers with deductibles has also grown since 2008. 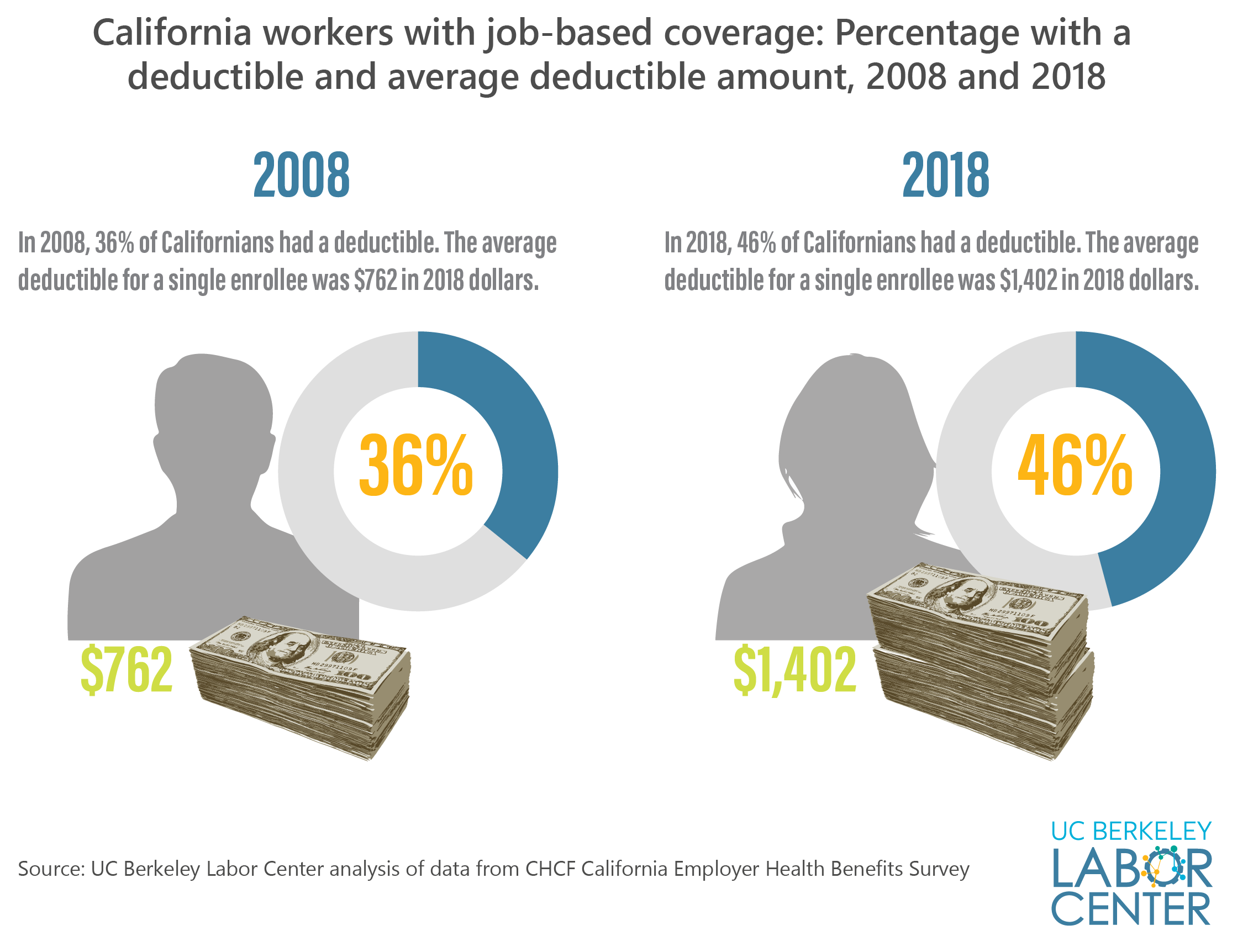 Most of the growth in the number of people with deductibles is due to more workers enrolling in high-deductible health plans (HDHPs). In 2008, just 4 percent of California workers were enrolled in HDHPs; by 2018, that proportion had nearly quadrupled to 15 percent.

Workers at certain firms were more likely to have deductibles than others in 2018:

As health care costs have risen for Californians with job-based coverage, those with deductibles feel the pain even more acutely: in addition to increasing premiums, they also are subject to greater risk of out-of-pocket spending when they access care.

Up next: In the next blog post, we’ll explore the affordability challenges for Californians who are paying a high share of income on their premium contributions to job-based health coverage.

* We focus on median wages rather than average wages because wage growth over the last ten years has been concentrated among the top ten percent of earners, nationally and in California. For this reason, median wage more accurately reflects how workers’ wages have changed over the years.