This is the eighth post in the Labor Center’s blog series “Rising Health Care Costs in California: A Worker Issue.”

Our prior blog posts examined the struggles that many Californians with job-based coverage are facing due to rising health care costs, including difficulty affording premiums and out-of-pocket costs, and downward pressure on wages. In this post, I turn to the question: Why are California health care costs so high and rising?

Research has shown that, compared to other wealthy countries, the U.S. spends much more on health care per person and yet our health system performs among the worst on measures of access, equity, health care outcomes, and administrative efficiency.

In an often-cited 2003 Health Affairs article, “It’s the Prices, Stupid,” Gerard Anderson, Uwe Reinhardt, and colleagues examined the factors behind the health spending gap between the U.S. and other countries. They found that the U.S. does not provide more health care services per person than the typical OECD country, suggesting that higher prices are the primary driver of our higher spending. In 2019, an updated study concluded “It’s Still the Prices, Stupid.”

A recent New York Times article showed how much higher U.S. prices for common inpatient and outpatient procedures and drugs are compared to prices in other countries, using International Federation of Health Plan data.  Examples included: “For a typical angioplasty, a procedure that opens a blocked blood vessel to the heart, the average U.S. price is $32,200, compared with $6,400 in the Netherlands, or $7,400 in Switzerland… A typical M.R.I. scan costs $1,420 in the United States, but around $450 in Britain. An injection of Herceptin, an important breast cancer treatment, costs $211 in the United States, compared with $44 in South Africa.”

Prices, not utilization, are the driving factor behind California health care cost trends as well

Unfortunately, there is no California exceptionalism in health care prices. California ranked as the 16th most expensive state in terms of average prices for select common health services in 2016 after accounting for wage differences, according to research by the UC Berkeley Petris Center.

Since 2013, prices for the four largest categories of health care services—inpatient, outpatient, professional services, and prescription drugs—have grown steadily in California, while utilization of those services has fallen. This analysis by the Health Care Cost Institute was based on claims data for Californians under age 65 with job-based coverage through Aetna, Humana, Kaiser Permanente, and UnitedHealthcare, which collectively covered 50 percent of Californians with employer-sponsored insurance in 2017. 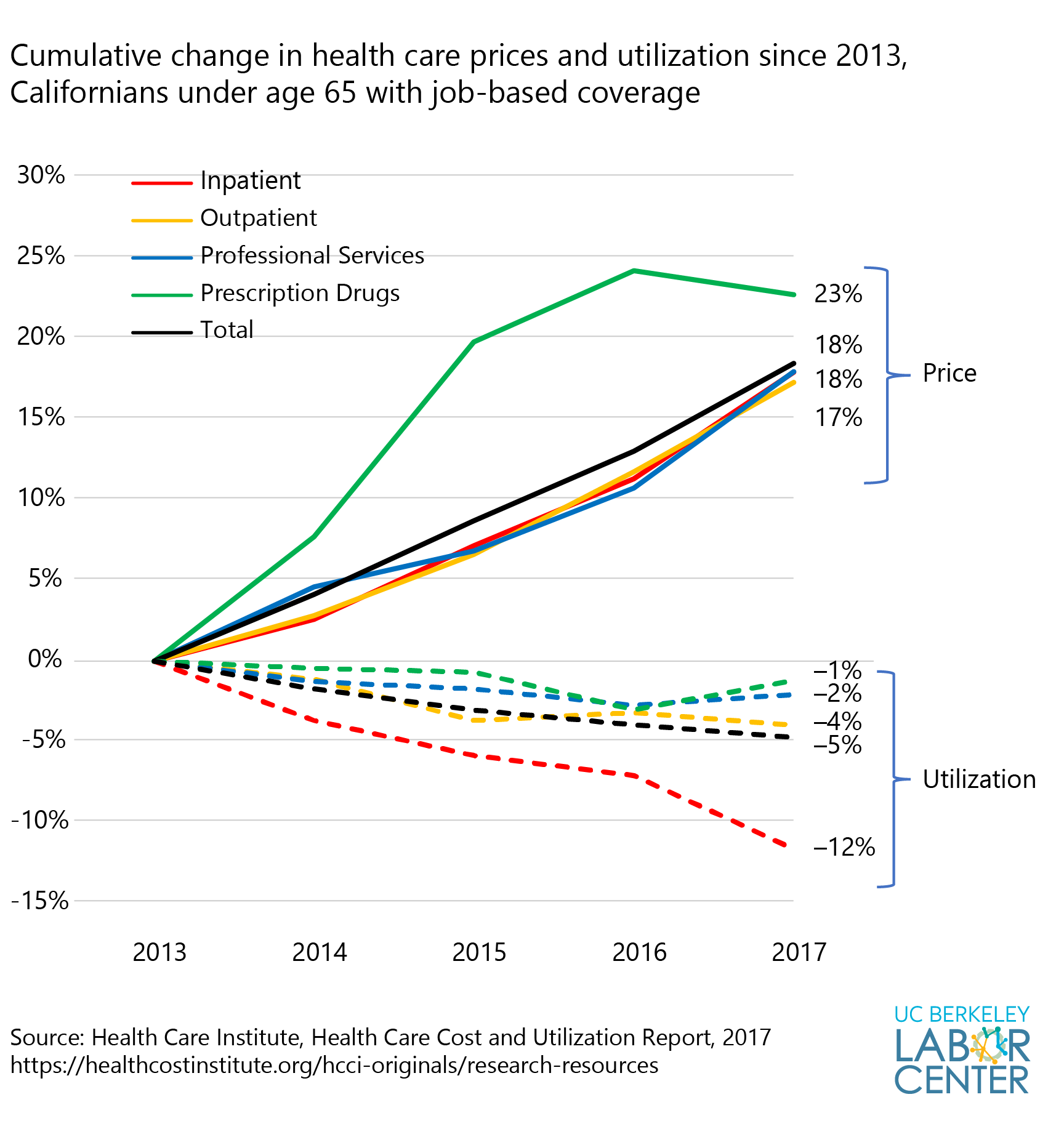 As shown above, prescription drug prices have grown faster than prices for other health care services in California in recent years, but our health care cost challenges will not be solved by addressing prices in any one sector alone. In 2017, retail prescription drug spending made up approximately 14 percent of total medical spending per Californian with job-based coverage, on average, compared to 39 percent for professional services, 23 percent for inpatient services, and 23 percent for outpatient services, according to the HCCI analysis.

Prices are much higher in some California regions than others, reflecting high levels of health care industry consolidation

Prices for the same health care services vary widely by California region, and that variation is associated with the level of consolidation of health care markets in each region, according to research from the UC Berkeley Petris Center. These findings are consistent with national research. In consolidated markets, a small number of hospital systems, medical groups, or insurers have a large market share. The more consolidated the market, the less competitive it is, and the higher the prices.

The Petris Center researchers describe California’s insurer, hospital, and specialty physician markets as highly concentrated in 2019, based on an index that is used to measure market concentration. The primary care physician markets in this state are moderately concentrated. These findings reflect horizontal (within sector) consolidation. Another important finding from the Petris Center research is a rapid increase in “vertical consolidation”—that is, consolidation across sectors—with 52 percent of California specialist physician practices owned by hospitals or health systems in 2018, compared to only 25 percent in 2010. The percentage of primary care physicians in practices owned by hospitals or health systems has also grown—from 24 to 42 percent over the same time period.

Petris Center research was used in the case that led to a recent preliminary settlement with Sutter Health, the largest hospital system in Northern California. The plaintiffs in the case—California Attorney General Becerra, the United Food and Commercial Workers International Union and Employers Benefit Trust, and class action plaintiffs—alleged that “Sutter’s anticompetitive practices led to higher healthcare costs for patients in Northern California compared to other places in the state.” Pending court approval of the settlement, Sutter will pay $575 million in damages, limit out-of-network prices charged to patients, increase transparency of price information, and end certain contracting practices that were alleged to stifle competition. Assuming court approval, the Sutter settlement will be a landmark decision that could ultimately have an influence on hospital practices around the country.

This preliminary settlement stands apart from the recent U.S. norm of limited antitrust enforcement and little regulation of health care prices. In contrast to the U.S. approach, other high-income countries generally employ a range of policies to more directly influence or set health care prices.

The high share of health care spending devoted to administration in the U.S. is the other primary reason we spend so much more than other high-income countries. This higher administrative spending, particularly spending on billing and insurance-related functions, has little value to patients and is therefore often counted as part of “wasteful health expenditures” that could be reduced or eliminated with simplification of our health care system.

In California, administrative complexity accounted for up to one-third of wasteful health expenditures in 2014 (between 28.4 and 34.9 percent), according to analysis by RAND researchers for the California Health Care Foundation. This is similar in magnitude to the other biggest category of wasteful spending—expenditures attributed to pricing and market inefficiencies (between 25.7 and 30.4 percent), which includes the higher prices that result from highly concentrated markets, as previously discussed.

For Californians with job-based coverage through a large employer, an average of 12 percent of premiums in 2017 went towards insurers’ administrative costs, sales and commission spending, profits, and taxes and fees. For small group coverage, these spending categories made up 19 percent of premiums.* The remainder of premiums paid for covered medical claims.

Understanding the drivers of our high and growing health care costs is critical to containing those costs. The research evidence suggests that what we pay for insurance and care in the U.S. drives our high spending levels much more than the amount of care we use. Important factors underlying the price problem include high levels of health care industry consolidation coupled with limited oversight of prices, and the high degree of administrative complexity in our U.S. health care system.

Up next: Our next blog posts will discuss policy considerations related to the affordability challenges facing California workers with job-based coverage.

* Estimates of insurers’ administrative spending assume plan expenses did not exceed premiums, which was true for most large insurers in California in 2017.