This is the sixth post in the Labor Center’s blog series “Rising Health Care Costs in California: A Worker Issue.”

In our last post, we explored the challenges associated with worker premium contributions. In this post, we will look more closely at how high out-of-pocket costs are hurting families, and the resulting financial and health care access consequences.

Job-based coverage does not provide adequate coverage for many

While rates of uninsurance have decreased since 2010, the share of  adults ages 19 to 64 who are underinsured has steadily grown since 2003, according to the Commonwealth Fund. Their most recent report using 2018 data finds that 28 percent of U.S. adults under age 65 with job-based coverage are underinsured, meaning they have insurance, but are subject to high out-of-pocket costs such as deductibles and co-payments. The Commonwealth Fund defines underinsurance as out-of-pocket spending—excluding premiums—equaling more than 10 percent of income or at least 5 percent of income among those who are below 200 percent of the federal poverty level, or having a deductible that constitutes at least 5 percent of income. While underinsurance is more common among adults in the U.S. who are enrolled in individual market insurance (42 percent), underinsurance has been growing most quickly among adults with job-based coverage since 2014.

California-specific data on underinsurance is not available for 2018, but an earlier version of the Commonwealth Fund survey found that California had a lower rate of underinsurance than the U.S. in 2016. This likely reflects the fact that, compared to all Americans, Californians are less likely to have deductibles in job-based coverage. However, given the growth in average deductibles over the last decade as discussed in a previous post, individuals and families in California, like their counterparts in the rest of the country, are seeing growing out-of-pocket costs negatively impact their financial well-being and access to care.

In terms of health care affordability, Californians with job-based coverage are most worried about unexpected medical bills (32 percent) and out-of-pocket costs (23 percent), according to a 2018 survey by Kaiser Family Foundation/ California Health Care Foundation. These health care affordability worries ranked higher than concerns about affording gasoline and other transportation costs (18 percent) and monthly utilities (12 percent). They were second only to rent or mortgage payments (25 percent). Given these competing financial needs, Californians are faced with difficult decisions about how best to prioritize their expenses. 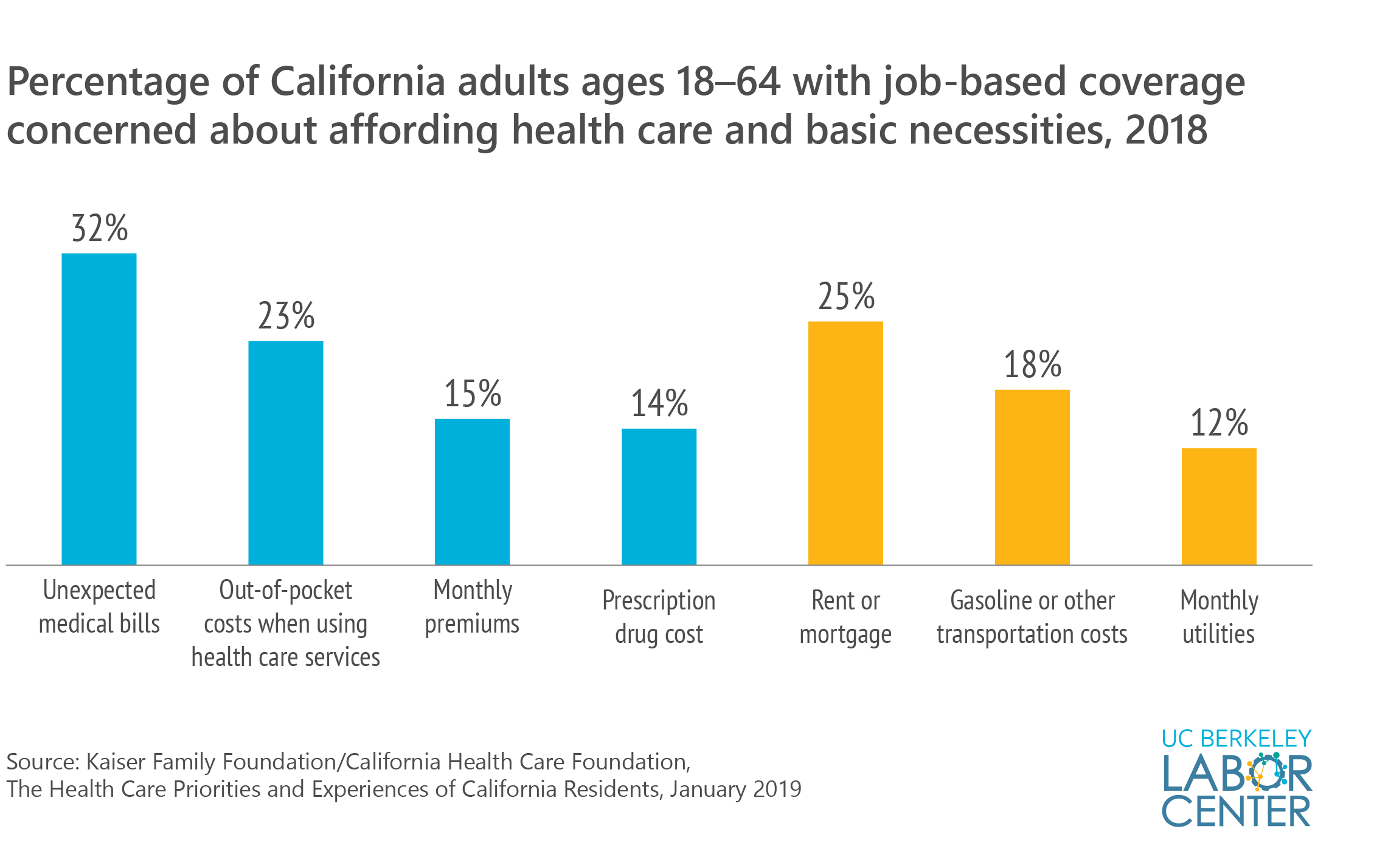 The high degree of worry about unexpected medical bills reflects how common it is to receive these bills. As of late 2018, approximately three out of ten (31 percent) Californians, regardless of insurance type, received an unexpected medical bill in the prior year, in spite of several policies in California that protect consumers in certain situations. For example:

Additional laws and regulations are needed to ensure that Californians are better protected from unexpected medical bills, as we will discuss in a future blog post.

According to the 2018 Kaiser Family Foundation/ California Health Care Foundation survey, 17 percent of California adults age 18 to 64 with job-based coverage report difficulties with paying medical bills in the past 12 months.

Difficulty paying medical bills and inability to afford coverage and care can cause a variety of financial consequences:

Difficulty paying medical bills is driven not only by the high cost of health care, but also by broader financial insecurity among many U.S. households. Nationally, four in 10 adults would not be able to cover an unexpected expense of $400 without selling something or borrowing money, according to the Federal Reserve. Among U.S. adults with job-based coverage with a deductible of at least $1,500 for a single person, 44 percent do not have savings that exceed their deductible amount, according to the 2018 Kaiser Family Foundation/LA Times survey.

With the increasing cost of health care, individuals and families are forced to forego medically-necessary services. According to the Kaiser Family Foundation/California Health Care Foundation survey, 38 percent of adults in California with job-based coverage report that they or a family member postponed care or medication due to cost. More specifically, 23 percent skipped dental care or checkups, 17 percent postponed getting health care, 16 percent skipped a recommended medical test or treatment, and 13 percent did not fill a prescription. 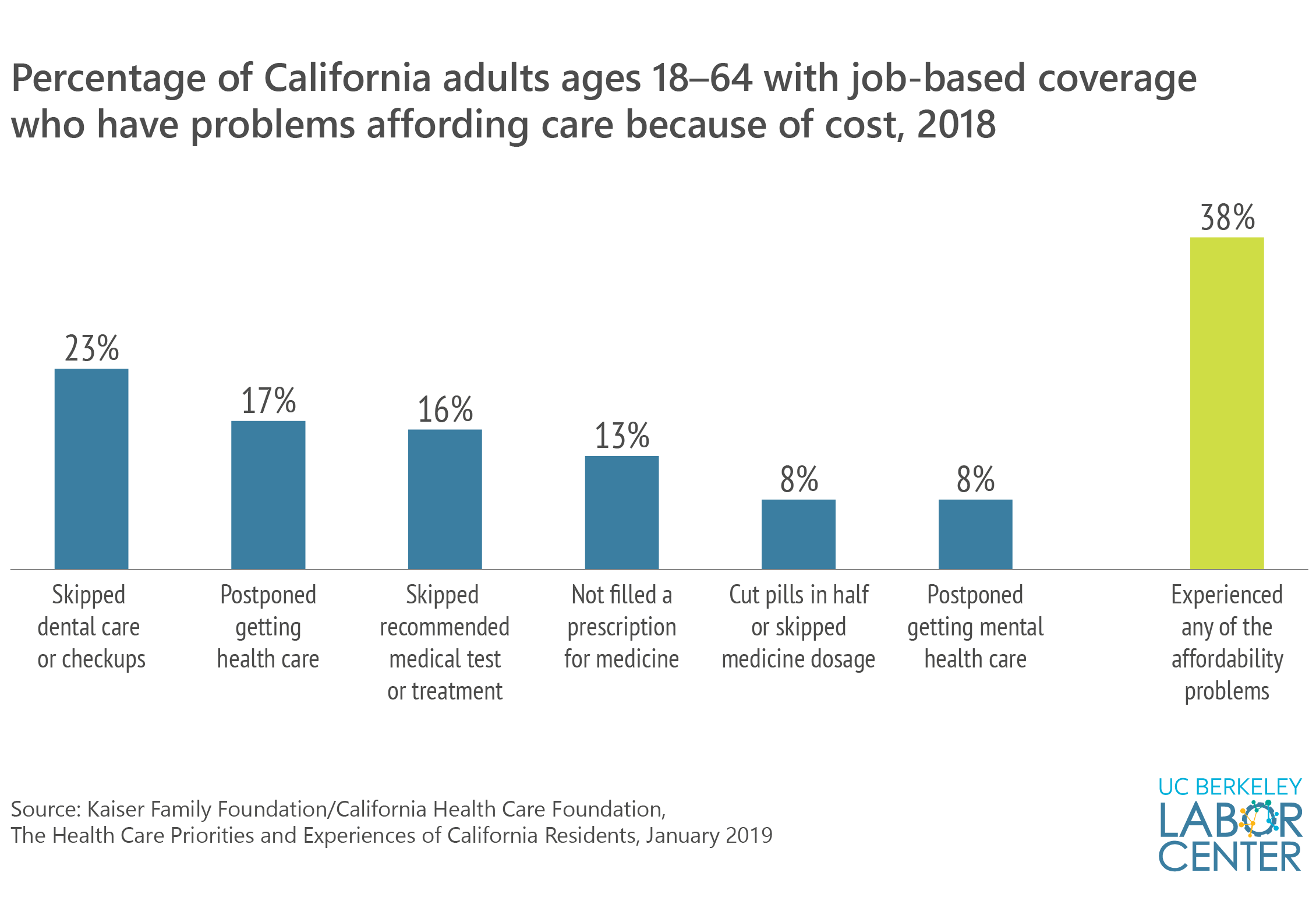 The challenges associated with unaffordable out-of-pocket costs are more common among certain groups with job-based coverage in the U.S. Nationally, adults with job-based coverage who have high deductibles, income under $40,000 per year, or someone in their household with a chronic condition are more likely to report difficulty affording care or insurance or paying medical bills, and are more likely to delay or skip care due to cost, according to a 2018 Kaiser Family Foundation/LA Times survey.

In this post, we discussed the impact of high out-of-pocket costs on Californians’ access to health care and financial well-being.

Up next: In the next post, we will explore how rising health care costs affect workers’ wages.