HomePublicationsBlogIndustries at Direct Risk of Job Loss from COVID-19 in California: A Profile of Front-Line Job and Worker Characteristics

Part of the Labor Center’s Covid-19 Series: Resources, Data, and Analysis for California
The data points in this blog post were updated on April 21, 2020.

Across the country there is mounting concern about how the COVID-19 pandemic is affecting low-income communities and communities of color, with emerging evidence of stark inequalities in infections and mortality rates. Similar questions are being asked about inequalities in job loss from the forced economic slowdown, especially after this week’s report of unprecedented numbers of workers filing for unemployment benefits.

In this blog, we focus on potential differences in the economic impacts on California’s workers, by analyzing major industries that are at highest risk of job losses or hours reduction stemming from social distancing and public health directives to slow the spread of COVID-19. Because of time lags in the gathering of government data, we do not yet have enough data on current job losses in California by industry. However, the major impact sectors are already evident, such as restaurants, hotels, and retail. In our previous blog we provided estimates of the size of these and other high-impact industries. Here, we profile these industries in terms of the prevalence of low-wage work and demographic characteristics of the workforce, focusing on front-line occupations that are likely to be the first to experience hours reductions or outright job loss. (See Data and Methods at the end of the blog for more detail.)

To be clear, our analysis only identifies major industries that are currently most at risk of direct impacts from efforts to manage the coronavirus pandemic. It is difficult at this early stage to identify what the actual employment impact will be, though it is clear that in the longer-run, we can expect significant job declines across many sectors of the economy, beyond the industries profiled here.

Figure 1 shows the prevalence of low-wage jobs in the key industries at risk of job loss in 2018 (the most recent year available). The majority of the industries have significantly higher rates of low-wage work in their front-line occupations than does California’s economy overall. For example, in the restaurant and child day care industries, fully two-thirds of front-line workers are low wage. Only one industry, air transportation, has a lower prevalence of low-wage work than the state’s economy overall. 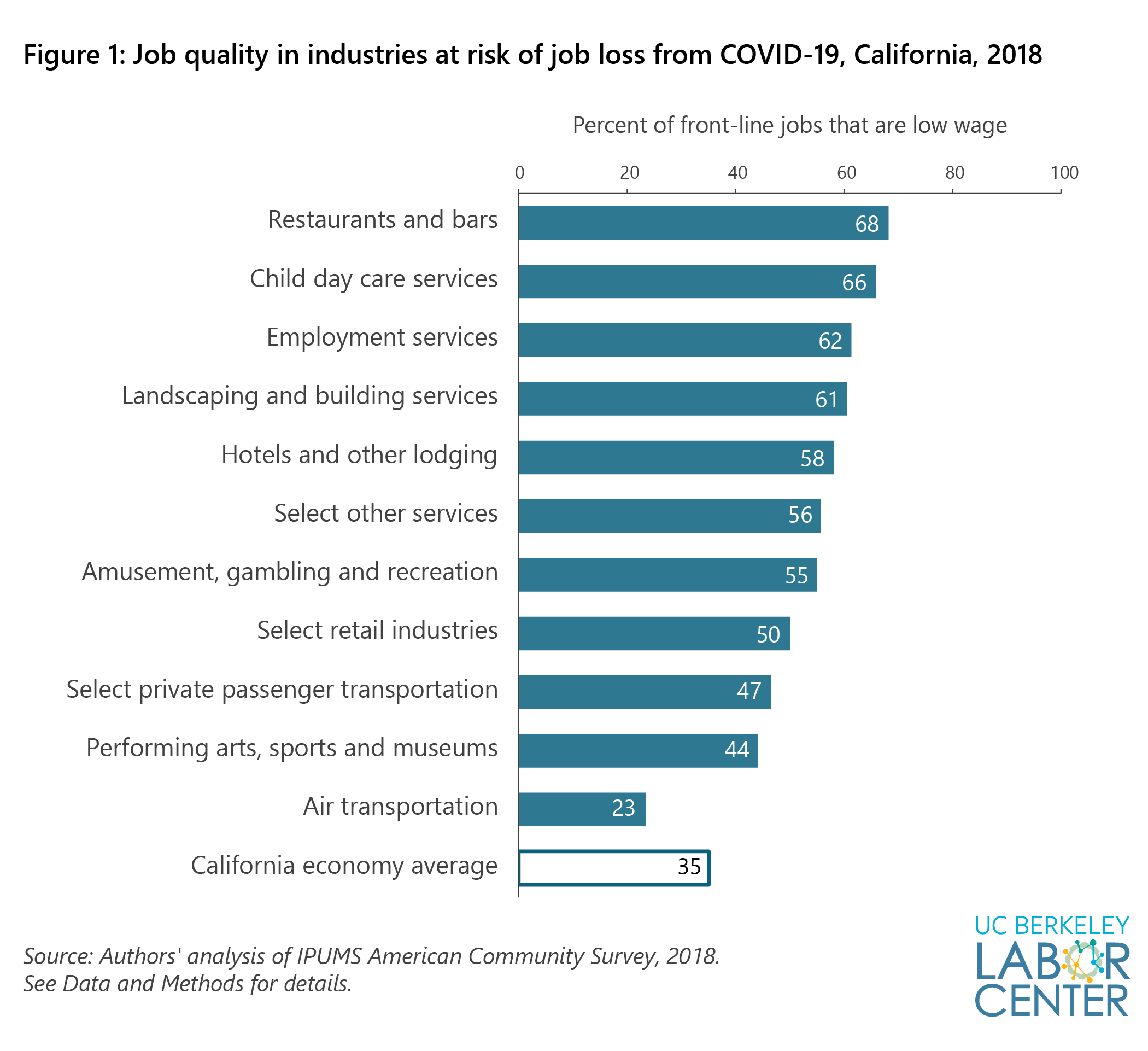 Figure 2 shows the race/ethnic distribution of front-line workers in major industries at risk of job loss. As is true for the state economy overall, people of color constitute the majority of the workforce for almost all of these industries. But workers of color, especially Latinx workers, are overrepresented in landscaping and building services, hotels, restaurants, and employment services. Asian workers are overrepresented in ‘other services’ industries (which includes car washes and hair and nail salons) and the air transportation. And Black workers are overrepresented in private passenger transportation (such as taxis), employment services, and air transportation. In short, while workers of color are more likely to be employed in industries at risk of job loss from the COVID-19 pandemic compared to white workers, the specific industries differ by race/ethnic group.

Overall, 23 percent of Latinx workers in California are employed in front-line jobs in these industries, while the other race/ethnic groups range from 15 to 20 percent. 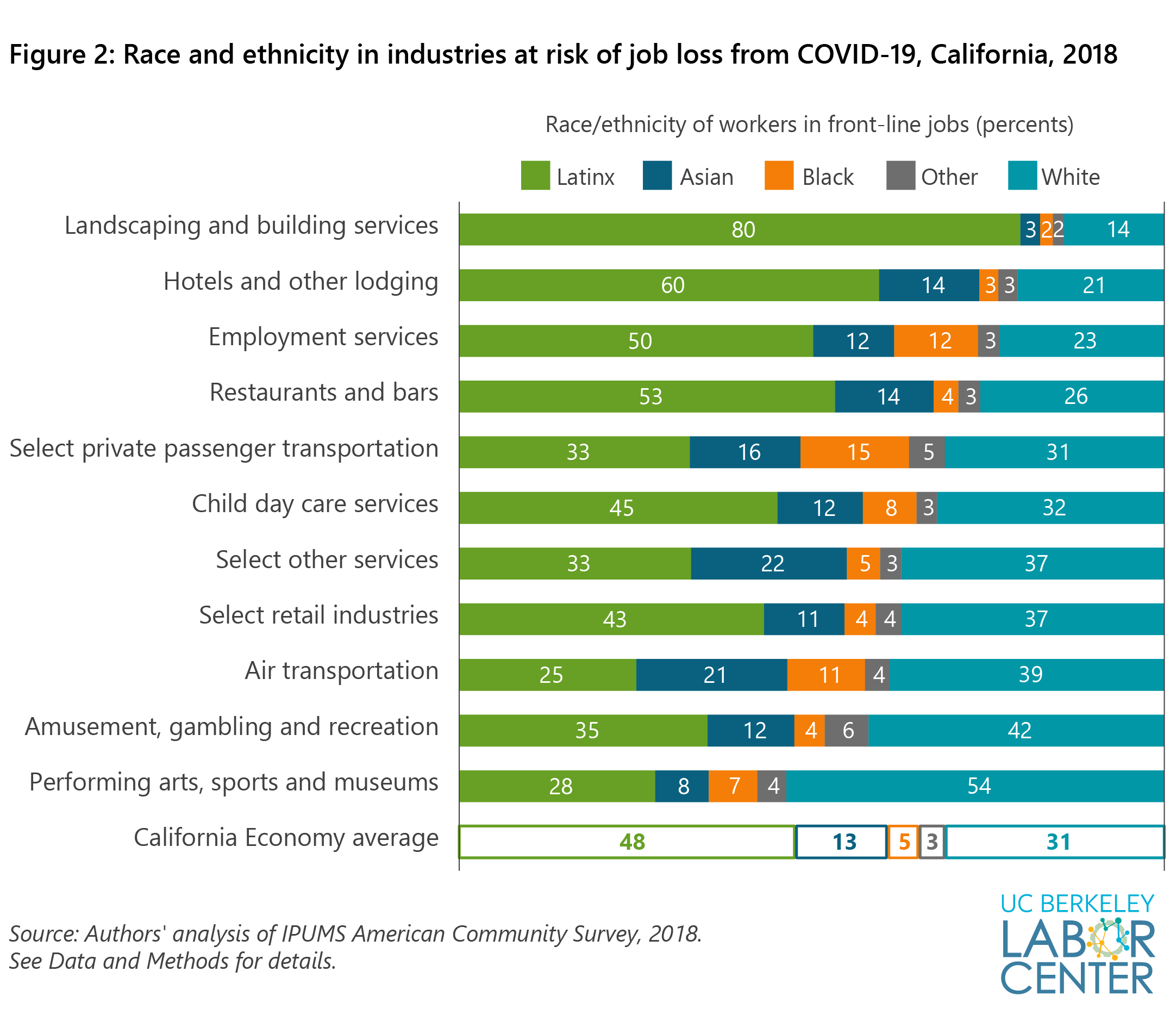 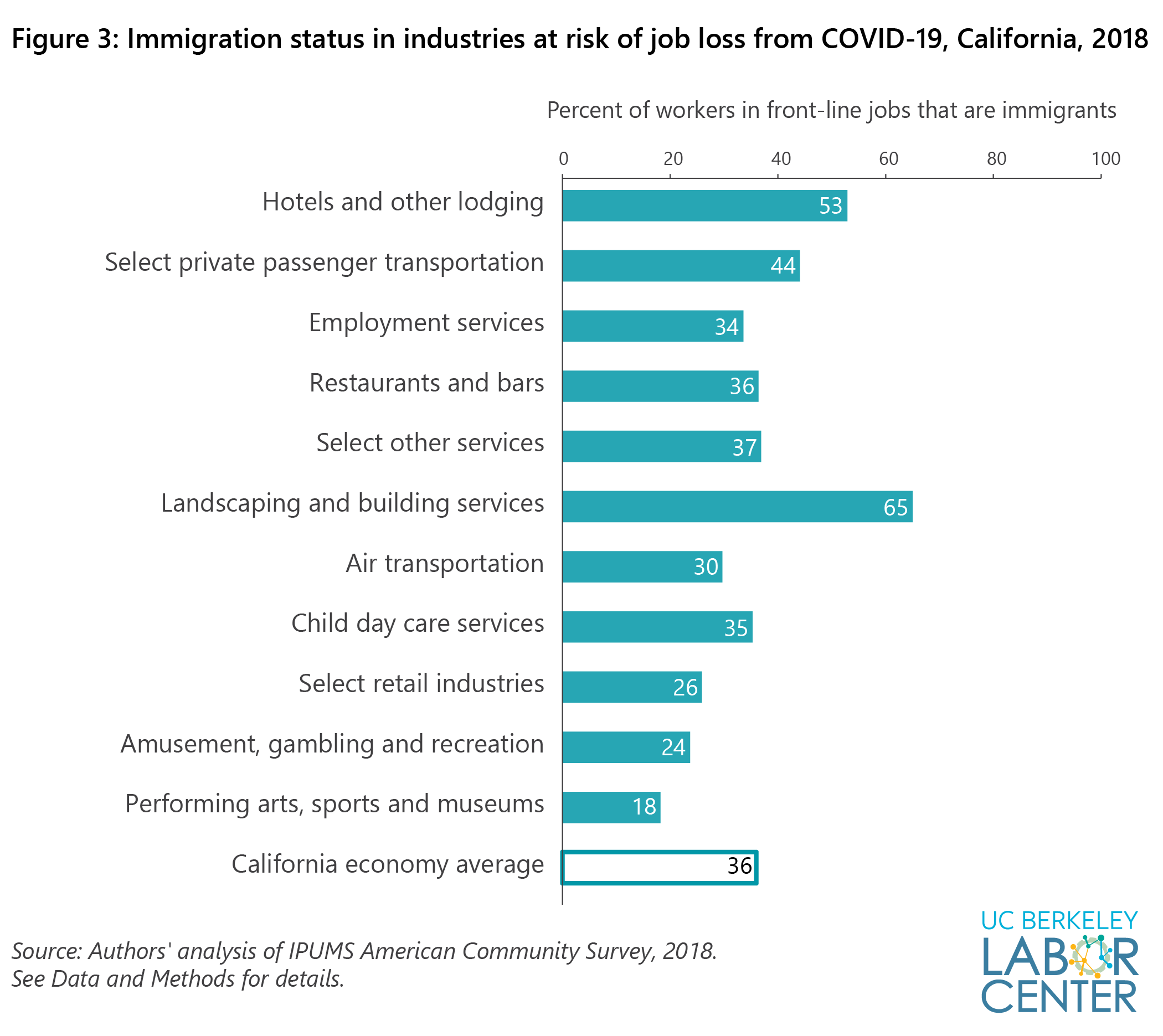 Figure 4 shows the age distribution of front-line workers in the major industries at risk of job loss. Compared to the state economy overall, many of these industries have a larger share of workers that are 35 or older. However, workers under 35 account for a disproportionate share of employment in restaurants, amusement, and select retail, which are the three largest sectors.

Overall, most age groups have roughly the same rate of employment in industries at risk of job loss (about one in five workers). The one exception is 18-24 year olds, who are significantly more likely to be employed in these industries (38 percent, breakout not shown). 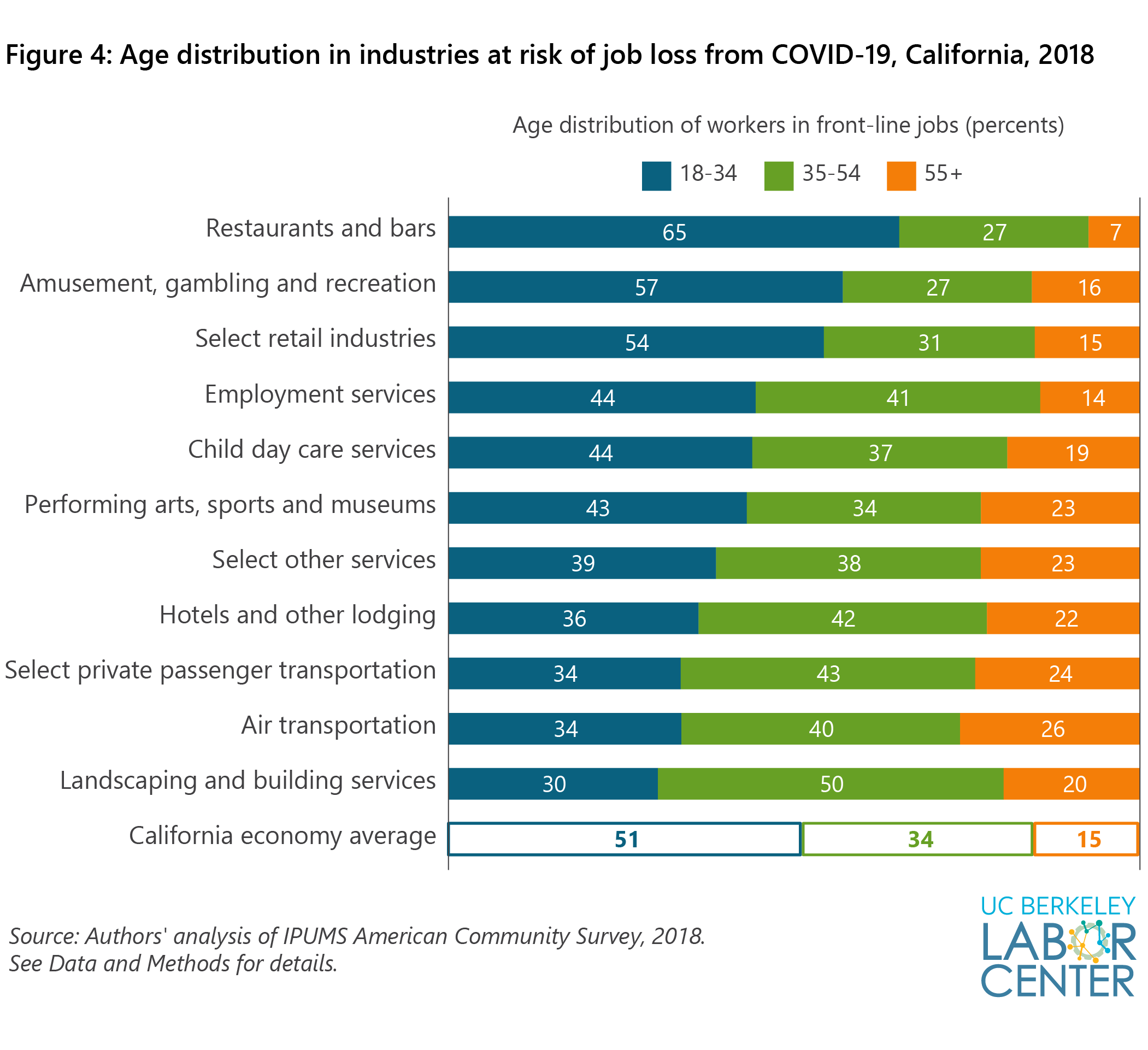 Figure 5 shows the gender distribution of workers in the major industries at risk of job loss. Not surprisingly, several industries have higher shares of women, including child day care services, select other services, and hotels. On the other end of the spectrum, landscaping and building services and select private passenger transportation are disproportionately male.

Overall, roughly a fifth of both women and men are employed in industries at risk of job loss due to COVID-19. 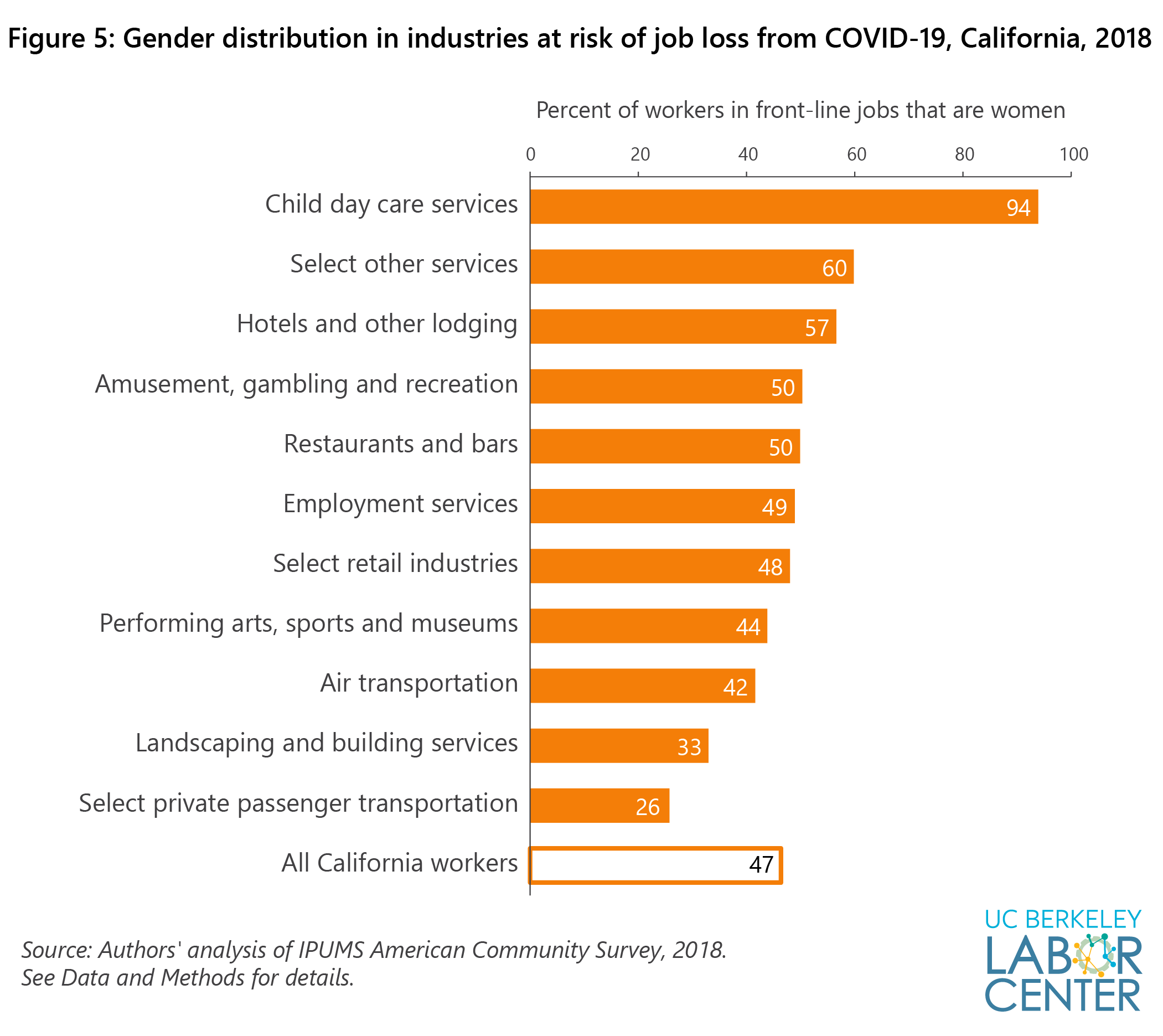 Data source: We use IPUMS American Community Survey (ACS) data for 2018. We restrict our sample to wage and salary workers 18 and over who reside and are employed in California. We exclude self-employed independent contractors as well as unpaid family workers.

Selection of industries at direct risk of job loss: Absent up-to-date data on changes in industry employment, our goal in this analysis was to identify major industries in California’s economy that are currently at highest risk of job losses or hours reduction due to social distancing and public health directives to slow the spread of COVID-19. In these industries, it is likely that firms have had to reduce or suspend operations because they do not qualify as essential services, have experienced significant drops in demand due to the shelter-in-place order, and/or cannot conduct their core business functions remotely.

Using this rubric, we included the following major industries in our analysis (both private and public sector unless otherwise noted):

Selection of occupations: Within the industries described above, we exclude occupations that have been declared essential workers by the state of California, including health and agriculture occupations. We also exclude managerial and technical occupations in order to restrict our analysis to front-line jobs, where job losses and hours reductions are likely to be concentrated.

[1]The dataset used in this blog, the American Community Survey, is known to undercount undocumented workers; the Pew Research Center estimates an undercount of 5-7 percent.