The University of California, Berkeley’s Center for Labor Research and Education released a report in 2004, “The Hidden Cost of Wal-Mart Jobs.” This study found that Wal-Mart workers disproportionately rely on taxpayer funded public health programs in California compared to workers in large retail as a whole. An internal Wal-Mart memo reported on in the The New York Times[1] provides data from Wal-Mart that validates the basic findings of that UC Berkeley report.

The Wal-Mart memo contains detailed information about their workers’ and dependent children’s health coverage, allowing us to compare Wal-Mart to other large retailers and to check the findings of our earlier report. A quote from the memo is below:

Applying Wal-Mart’s reported percentages of workers and children enrolled in Medicaid/SCHIP implies Wal-Mart workers and children cost $456 million to taxpayers nationally through their use of public health programs. This does not include the costs of adult dependents. (See Table 3)

The memo further reports that 19% of Wal-Mart employees lack health insurance. The cost of uncompensated care for those workers adds an estimated $202 million in taxpayer costs nationally, and $10 million in California. These costs were not quantified in the original report (see Table 4). 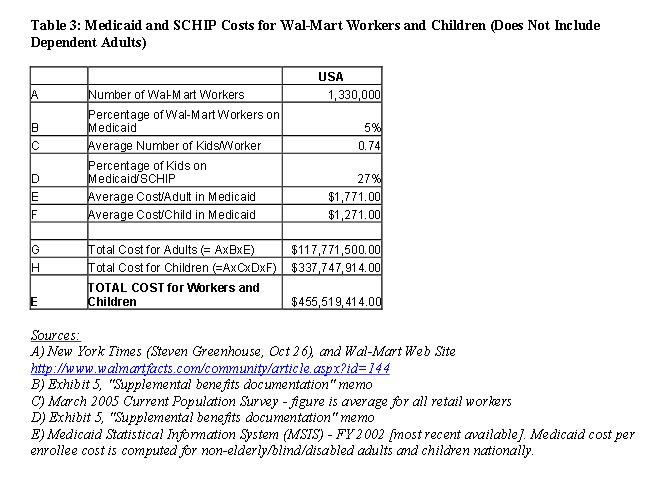 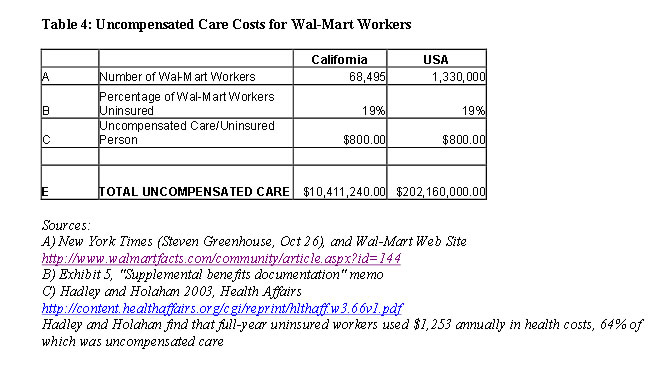