HomePublicationsBlogJob-based coverage is less common among workers who are Black or Latino, low-wage, immigrants, and young adults

This is the third post in the Labor Center’s blog series “Rising Health Care Costs in California: A Worker Issue.”

Job-based coverage remains the most common form of health coverage in the U.S. In 2018, more than half (58 percent) of California’s 24.2 million adults ages 19 to 64 received health insurance through their own employer or a family member’s employer, based on analysis of data from the U.S. Census Bureau’s Current Population Survey (CPS), described in our last blog post.

Among the 17.4 million Californians ages 19 to 64 who were employed either full- or part-time, 66 percent were covered by employers’ health plans in 2018. This blog post discusses which workers in California have job-based coverage, and who is left out.

Workers who are Latino or black, low-wage, immigrants, and young adults have lower rates of job-based coverage

Stark differences in the rates of job-based coverage exist across race, income, citizenship status, and age groups. Among California working adults ages 19 to 64, the percentage who had employer-based coverage was lower for Latino and black workers, low-wage workers, non-citizen immigrants, and young adults than for other workers in 2018. 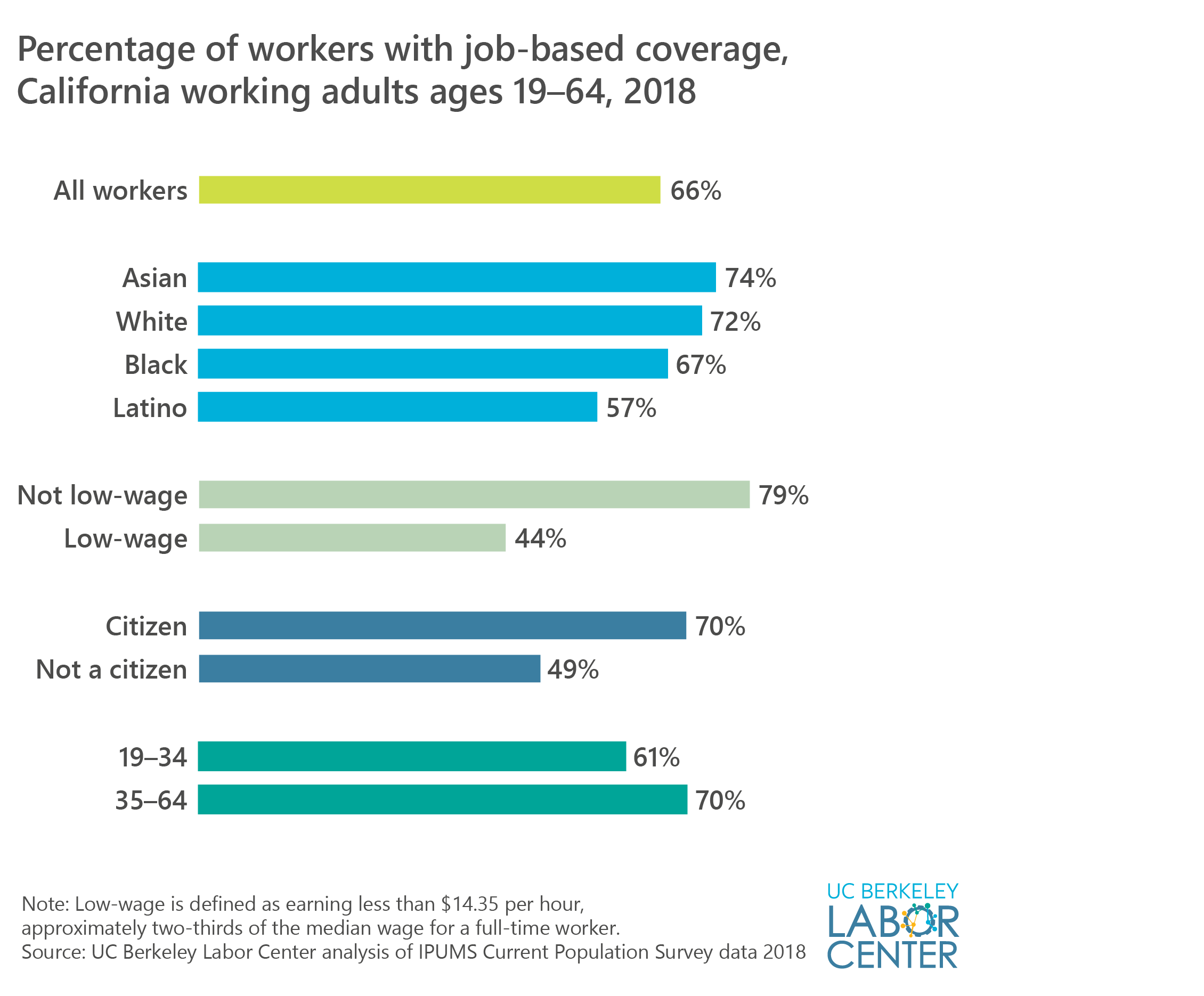 The variation in the rates of job-based coverage is even greater when accounting for race, income, and citizenship status together, particularly for Latino workers. Among Latino, non-citizen adults ages 19 to 64 in California, more than half (56 percent) are low-income workers, earning less than $14.35; only 31 percent of this group received insurance through their employer.

As we described in the last blog post, many workers without job-based coverage instead have Medi-Cal, individual market, or other coverage. But for those who remain uninsured, the consequences are considerable. The uninsured have limited access to care and are at considerable risk of financial hardship as a result of their lack of insurance. Low-income and Latino Californians under age 65 are not only less likely to have job-based coverage, but are also more likely to be uninsured.

Workers of some demographic groups are more likely to find employment in certain types of firms and jobs. For example, Latino and non-citizen workers are more likely to work in smaller firms and in low-wage occupations, both of which are job characteristics associated with lower rates of job-based coverage. Taken together, characteristics like race and ethnicity, citizenship status, and age are often associated with the type and nature of employment, which in turn greatly determines the likelihood of having job-based coverage.

For undocumented workers in particular, job-based coverage is relatively rare. However, when undocumented workers are offered coverage, it may be the only type of coverage they are eligible for, given the exclusion of undocumented individuals from Medicaid and Affordable Care Act eligibility under federal policy. (California has expanded Medi-Cal eligibility to low-income Californians up through age 25 regardless of immigration status beginning January 1, 2020.) This is yet another reason that it is important that job-based coverage is affordable for all workers who rely on it.

This blog post highlights the inequities in terms of which workers have job-based coverage in California, with lower rates among black and Latino, non-citizen immigrants, low-wage, and younger workers. As this series continues, we hope to also shed light on inequities regarding the affordability of job-based coverage among various groups of California workers.

Up next: In the next blog post, we will describe how premiums and deductibles for job-based coverage in California have grown faster than wages.