As the nation’s attention is focused on how to improve security and safety at our airports, considerable media coverage has highlighted the problems of low pay and inadequate training among the pre-board baggage screeners. We examine here the Quality Standards Program, an innovative effort at San Francisco International Airport that addresses this key issue, and with favorable results. This program may provide a model for improved airport security and safety nationally.

The Quality Standards Program at San Francisco International Airport was approved in January 2000 and its implementation began the following April. The program establishes recruitment, training, compensation and performance standards for all employers with workers in security areas or performing security functions at SFO. The standards, which exceed those set by the FAA, cover not only the baggage screeners, but also the skycaps, baggage handlers, airplane cleaners, fuelers, and boarding agents–anyone whose performance affects airport security and safety.

During the same period, SFO also initiated a similar program for other employers at the airport and began to expand worker voice throughout the airport. These initiatives developed from a living wage campaign in San Francisco that included the airport and from a multi-union organizing campaign that addressed many airport employers. The QSP’s coverage was thus not only broader than the pre-boarding security checkpoint. It also came into being in the context of a broader shift in labor-management relations.

In the summer of 2001 we surveyed airport firms to assess the benefits and the costs of the Quality Standards Program. We find reported improvements in overall job performance, significantly reduced employee turnover, and greater ease in recruiting more skilled applicants. Absenteeism, disciplinary problems and job dissatisfaction were also lower than before the program. All of these findings indicate improved job performance across the entire range of airport security and safety areas. We find also that the reported costs are modest in relation to the number of airport passengers.

We find that all these improvements can be attributed to the cooperative efforts among airport management, airport employers and airport unions in crafting and implementing the airport’s Quality Standards Program and the related programs as well. Increasing employee voice and improving the labor-management climate led not only to higher compensation but also to better training and job performance among security and safety workers. Although we have not yet obtained data on the results of past FAA security tests at SFO, we understand that security performance has improved as well.

These improvements, ironically, could be placed at risk by current discussions of reform. While transferring responsibility for pre-board security functions away from the airlines is probably desirable, the SFO model shows how agencies based at individual airports can accomplish these goals. Developments similar to those discussed here at SFO are also underway at Los Angeles International Airport and could be reproduced at other airportsas well. Any new proposed Federal regulations should create floors and not ceilings, so that individual airports can organize security in a manner that takes local labor markets into account. Policy makers should examine the positive results and build upon what is being achieved in San Francisco.

Private security companies under contract with the airlines carry out baggage screening in U.S. airports. Airlines routinely award contracts to the lowest bidder. In order to compete for contracts, security companies keep wages at a minimum and offer few, if any, employment benefits. As a result, low wages and high worker turnover have become the norm at airports throughout the country.

Pre-board screeners earn an average of $6 an hour nationally, often less than the starting wage in airport fast food restaurants. In 1999, according to the General Accounting Office, annual turnover among the nation’s 8,000 airport screeners exceeded 125 percent. At this rate, the average screener has been on the job for four and one-half months. At Boston’s Logan Airport, where two of the hijacked planes departed, the turnover rate was 200 percent; at Atlanta’s Hartsfield, it exceeded 400 percent.

Airport and FAA officials have been concerned about these conditions, but until now there were few attempts to address them. The regulatory relationship was effectively broken when airlines began sub-contracting security services. It is true that the FAA has sought to define minimum standards for hiring, pay, training, skills and performance of baggage screeners, as in its Proposed Rule to Improve Screener Performance. But despite its best efforts, the FAA has not been able to secure agreement from the airlines and the screening companies for these standards. To our knowledge, these draft standards remain on the shelf.

The Quality Standards Program at San Francisco International Airport was designed to address such problems directly. Discussions began in 1999, the agreement was approved in January 2000 and implementation began in April 2000. Contractors that had previously evaded regulatory oversight now have to be certified by the SF Airport Commission. The SFO airport community, and the Commission in particular, deserve considerable credit for their success in crafting such a program in the absence of a federal policy.

Under the program, employers are required to pay a minimum of $10 an hour if they provide health benefits, and $11.25 an hour if they do not. Firms must also satisfy a range of hiring, training and performance standards, many of which were designed to exceed the proposed FAA regulations. Some of the QSP and FAA standards, such as the requirement of a high school degree, or its equivalent, for screeners still seem very low. Still, with a minimum wage standard in place, firms bid on a level playing field and compete for contracts based on quality of service, not on how much they can save on labor costs.

The QSP was itself crafted as the result of a campaign in San Francisco to bring living wage standards to the city’s contractors and leaseholders (as at SFO). During the same period, a coalition of unions embarked on a multi-union organizing drive at the airport. All three of the screening companies under study recognized unions and negotiated contracts over the last two years.

Pay levels and the labor-management climate at SFO have changed substantially in the past few years. In addition to the QSP, a series of other agreements regulate employment relations. A Minimum Compensation Ordinance (MCO) covers employers not directly affected by the QSP, such as retail concessions. This agreement, which mandates pay leve ls close to those under the QSP, was implemented beginning in October 2000 and takes effect on a rolling basis, as individual leases become renewed. A Labor Peace/Card-Check Rule regulates union organizing and recognition among the airport’s employers (not covered by the Railway Labor Act) and a Health Care Accountability Ordinance, which effectively calls for health care coverage for all employees, has also just begun to be implemented in the past year.

We have examined the overall effects of the programs at SFO and we report here some initial findings, based upon our survey of employers at SFO and interviews with key actors. We are issuing this report because of the timeliness of the national discussion on airport security. A more detailed study, with further results as well as findings from employee surveys, will be completed and released later in the year.

Earlier this year, with support of the University of California’s Institute for Labor and Employment, we set out to assess the impact of the Quality Standards Program. Our impact study builds upon a prospective analysis that we released in October 1999: Michael Reich and Peter Hall, Living Wages at the Airport and Port of San Francisco, available from the web site of the Institute of Industrial Relations at UC Berkeley.

Drawing on surveys of employers, interviews with key airport actors and data sources provided by SFO, we have assessed the impact of the Quality Standards Program (QSP) on worker turnover, employee performance and business impacts. The surveys and interviews were conducted during the summer of 2001. Our study is limited to ground-based employees of airlines, airport service firms (which include pre-board screening firms) and concession-holders. This group includes over one hundred firms employing nearly 30,000 workers. Overall employment at SFO exceeds 34,000 workers, of whom nearly 10,000 were receiving pay below $11 per hour in 1999. (See the attached tables.)

Security is not a matter of screeners alone. Ticket agents check passengers’ baggage. PBX operators screen luggage. All airport employees need to be alert enough and committed enough to their position to take responsibility for airport safety. At San Francisco International Airport, we estimate that up to 7,000 low-wage workers have access to secure areas of the airport, or have job responsibilities that affect aircraft security.

The firms most affected by the QSP reported a 37 percent decrease in turnover rates, compared to an 18 percent reduction reported by other firms that were not covered or less affected. This 18 percent reduction itself reflects wage increases and the other agreements that affected the rest of the airport workforce. During the same period, turnover was increasing in the San Francisco Bay Area workforce.

Average job performance improved significantly. One-third of all SFO employers, together accounting for over half of all employees, reported improved overall job performance among workers covered by the QSP, while the rest reported no deterioration. The results were more positive for the firms that were most affected by the QSP. The one employer that reported worse performance had an unsettled and more conflictual relationship to the other components of the SFO employment agreements.

The wage effects of the QSP program were substantially effective in employee recruitment. Entry-level wages for those covered by the program increased an average of almost $3 per hour. All employers with positions directly affected by the QSP reported the same or improved numbers of applicants, and reported that these applicants were more skilled.

While the wages of those directly covered by the QSP program rose faster than average, wages in all positions have improved since the program was instituted. (See the tables at the end of this report.) Employers reported reduced absenteeism, fewer disciplinary problems and higher morale. These findings point towards improved job performance across the entire airport.

The costs of the QSP to airport travelers were modest.

We estimate the cost of the wage and health benefit increases directly as a result of the QSP at $57 million per year, or $1.37 for each airport passenger (at 2000 passenger levels). We arrived at this figure by using employer’s responses to questions on our survey that asked about the number of workers who received wage or benefit increases as well as the amount of the increases.

These initial findings suggest that the Quality Standards Program was associated with improvements in wages and working conditions, both for those directly covered by the program and those who received indirect benefits. Workers with more job experience, skills and training, now conduct the security-related functions at the airport.

We understand that security has improved at SFO in recent years. Since have not yet obtained FAA data on trends in security breaches at SFO, we cannot report how the improvements in compensation and job performance transla te into improved security. We hope to have such data in the future.

These findings imply that a policy of replacing all airport screeners with federal security personnel runs the risk of being too narrowly focused. One of the main advantages of the SFO program is the breadth of its impact. By linking wage improvements to training and accreditation programs, the program has gone a long way to improving morale and performance across the entire airport. 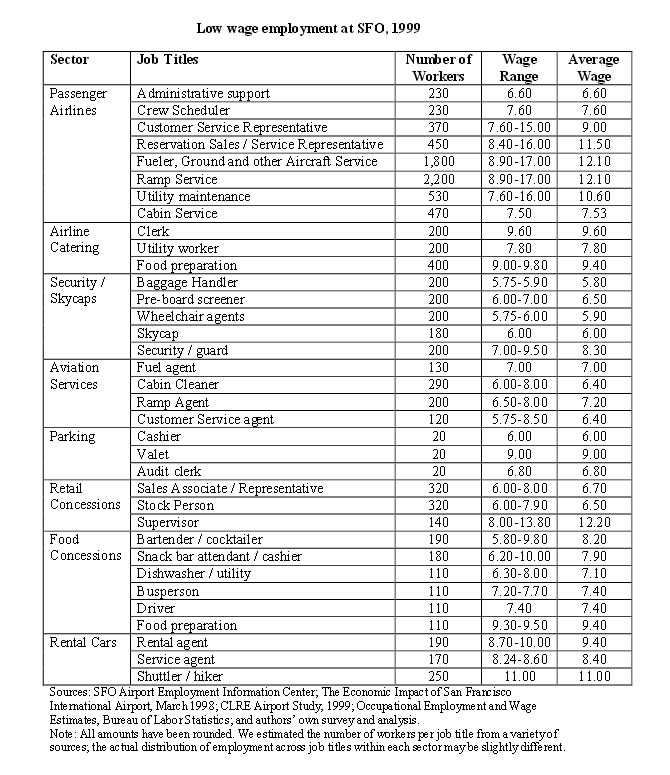