HomePublicationsReportMisclassification in California: A Snapshot of the Janitorial Services, Construction, and Trucking Industries

The practice of misclassifying workers as independent contractors has been a persistent problem for years. A 2000 study commissioned by the U.S. Department of Labor (DOL) estimates that between 10% and 30% of audited employers misclassified workers.[1] Between 2000 to 2007, the number of misclassified workers identified by state audits increased by 42 percent.[2]

While there are legitimate circumstances where classifying workers as independent contractors is appropriate, it is clear that some employers misclassify workers as a way to reduce their labor costs by avoiding payroll taxes and payments for unemployment insurance and workers compensation.[3] Misclassification also allows employers to transfer some of their operating costs and legal risks to workers, which may result in lower earnings overall for misclassified workers. Misclassification is a significant drain on government resources, with the state and federal government losing at least $3,000 in annual revenues for every worker that is misclassified.[4] When misclassified, workers lose out on the many protections afforded to employees by state and federal labor laws, including:

In April 2018, the California State Supreme Court ruling in the Dynamex case established a new legal standard for determining whether or not a worker is misclassified, called the ABC test, that will make it more difficult for employers to misclassify workers. The California state legislature is currently considering legislation to codify the ABC test in state law.

In this fact sheet we look at three industries in California where misclassification is known to be disproportionately high and could potentially be reduced by an ABC test – trucking, construction, and janitorial services. For each industry, we describe the demographics and wages of workers and misclassification practices by employers.

According to a 2000 study by the US Department of Labor (USDOL), the trucking industry has one of the highest rates of misclassification nationally.[5]

Research suggests that misclassification is particularly egregious in port trucking. A 2010 report by the National Employment Law Project (NELP) found that 82% of port truckers are classified as independent workers, of which an estimated 80% are misclassified[6] Port trucking companies frequently require that drivers purchase a truck and cover all truck-related expenses including fuel, taxes, insurance, maintenance, and repair costs, which significantly reduces the earnings of drivers. A meta-analysis of surveys conducted of port truckers between 2004 and 2009 found that the average work week for drivers was 59 hours and net earnings were $28,783 per year for independent contractors and $35,000 per year for employees. Independent contractors also were significantly less likely to have health insurance or retirement benefits.[7]

Port drivers have been fighting for years against these exploitative practices and since 2011 have filed more than 1,000 complaints with the California Division of Labor Standards Enforcement (DLSE) for wage theft violations related to misclassification. The Labor Commissioner’s Office has issued 448 decisions in these cases, finding that drivers were owed more than $50 million in wages collectively.[8]  The NELP report estimates that the port trucking industry is liable for close to a billion dollars in wage and hour violations each year.[9] 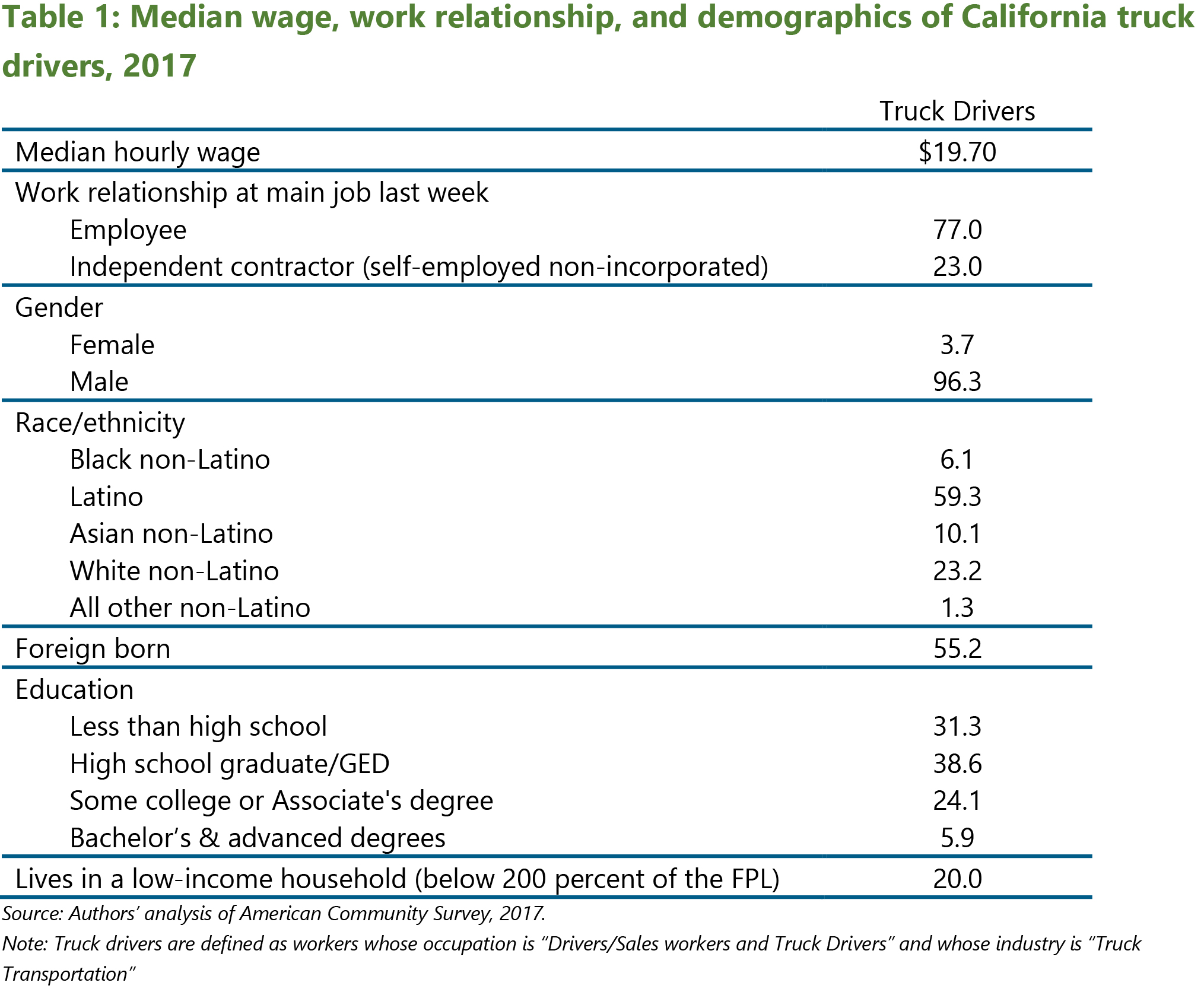 According to a 2000 study by the US Department of Labor (USDOL) the construction industry has the highest rate of misclassification nationally.[11] A report by the Economic Roundtable estimated that in 2011, 19 percent of California construction workers who were independent contractors were misclassified. The authors find that misclassified construction workers earn only 67 cents for every dollar earned by their peers who work as full-time employees. [12] 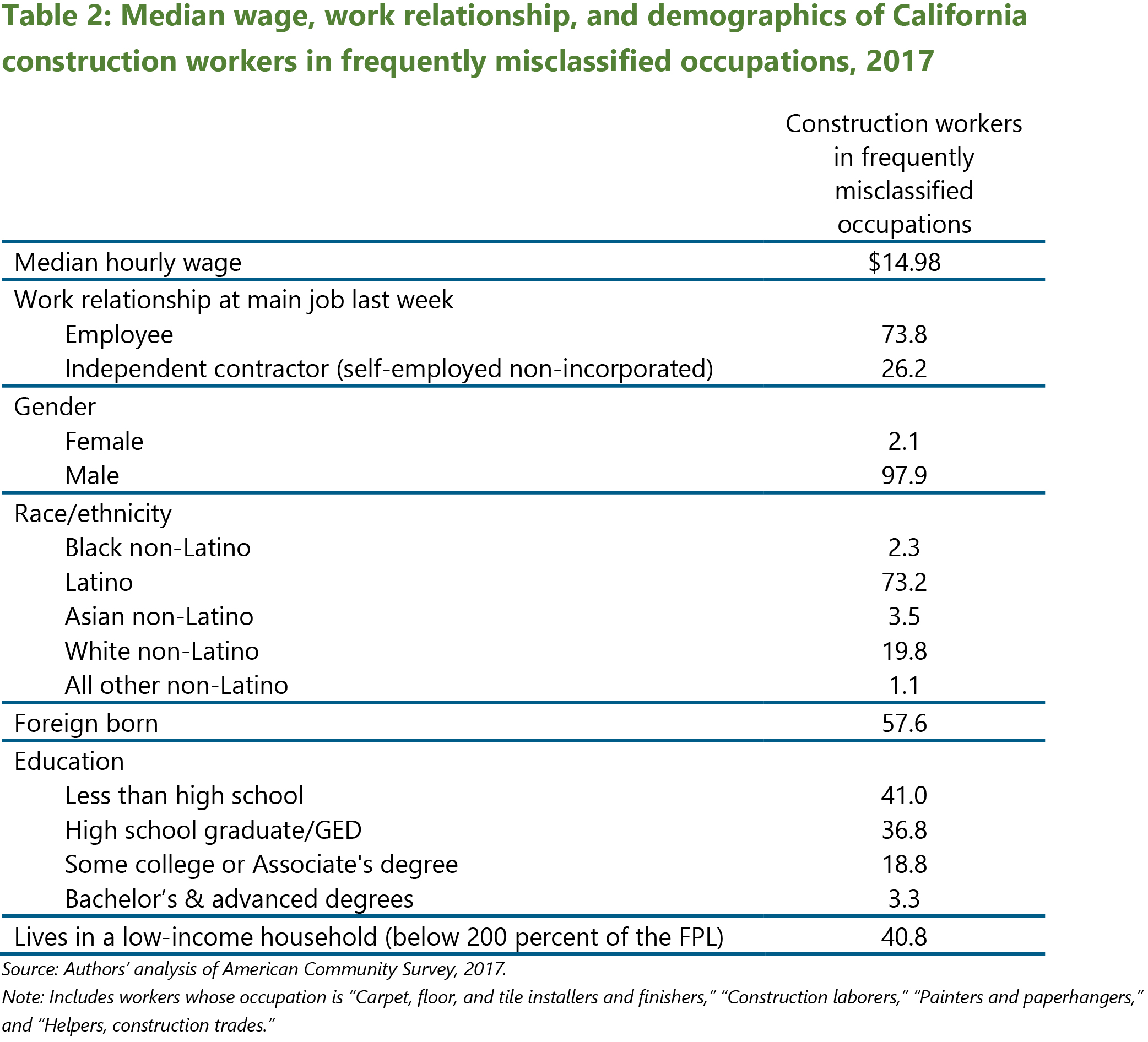 The Economic Roundtable report finds that misclassification is most common in the specialty trades and hands-on construction occupations, especially among workers whose occupation is carpet installer, laborer, painter, or construction helper. Table 2 shows our estimates of wages and demographics for all workers in these four construction occupations. A little over a quarter of these workers are independent contractors, while just under three quarters are traditional employees. An overwhelming majority are workers of color and well over half are immigrants. The median hourly wage of these workers is just under $15 an hour, with 40 percent living in low-wage households (defined as income below 200 percent of the Federal Poverty Line). Most have a high school education or less.

Labor costs make up the majority of costs in the janitorial services industry and profit margins are thin, which has pushed firms to look for ways to reduce labor costs. Subcontracting is widespread, and some firms turning to illegal practices such as employee misclassification to remain competitive. It is common for janitors to be hired as independent contractors by a firm that is a sub-contractor to another contractor that has been hired to provide services for a building or company.[13] Several large companies, such as Coverall, Jani-King, Jan-Pro, and CleanNet, have used a franchise model in which individual workers are considered franchises and classified as independent contractors.[14]

While we do not have a good estimate of exactly how many janitors are misclassified as independent contractors, the many cases that have been successfully fought through the legal system or complaints with state labor agencies suggest that it is common within the industry. For example, a worker advocacy organization in the Los Angeles area called the Maintenance Cooperation Trust Fund (MCTF) has helped to recover more than $26 million in unpaid wages due to misclassification and other labor law violations.[15] In 2018, a federal circuit court found that Jani-King’s franchise model misclassified workers as independent contractors.[16]

However, the combination of misclassification and complex layers of sub-contracting in the industry often make it difficult for government agencies to enforce labor laws or for workers to recuperate unpaid wages through the legal system.[17] The California Labor Commissioner’s Office now requires that janitorial service providers and contractors register annually with the department to make it easier for workers to identify the companies holding the contracts and hold them accountable for labor law violations, including misclassification.[18] 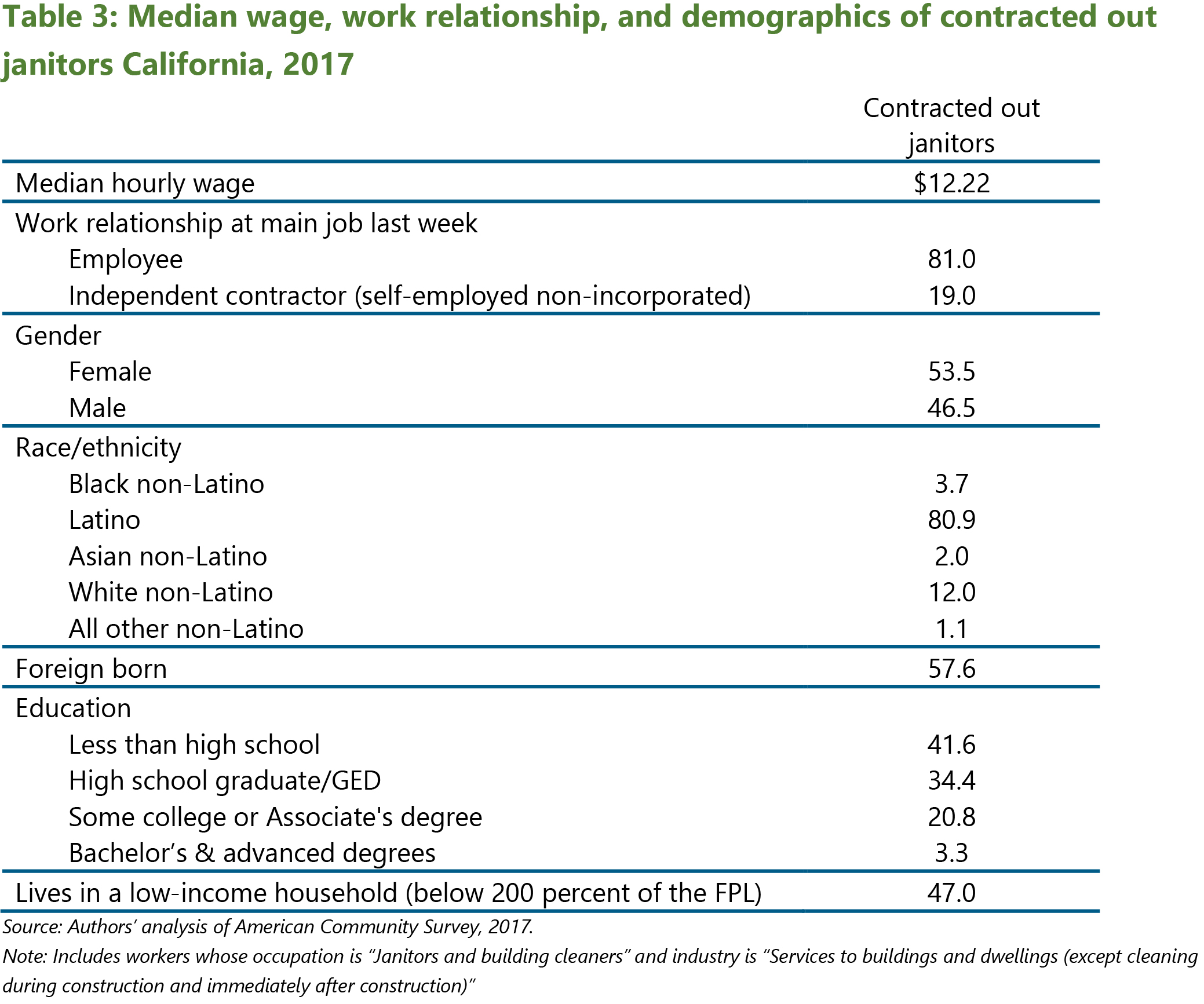 Table 3 shows our estimates of wages, work relationship type, and demographics for janitors. Misclassification is most common among janitorial services firms that contract out to other companies.[19] Here, we identify janitors working for these types of companies by looking specifically at janitors working in the building services industry. We estimate that approximately 19 percent of these janitors in California are classified as independent contractors, although we do not have an estimate of how many are misclassified. The median wage for janitors is $12.22 an hour, which means that well over half would be considered low-wage workers.[20] Janitors are disproportionately Latino (80.9 percent) and foreign born (57.6 percent). Nearly half live in low-income households (defined as income less than 200 percent of the Federal Poverty Line).

[13] Hinkley, Bernhardt, and Thomason, “Race to the Bottom.”

[17] Hinkley, Bernhardt, and Thomason, “Race to the Bottom.”

[19] Hinkley, Bernhardt, and Thomason, “Race to the Bottom.”

[20] The low-wage threshold for California for 2017 (defined as two thirds of the median wage) was $14.36 an hour. See Ian Perry, “Low-Wage Work in California Data Explorer” (Center for Labor Research and Education, 2018), https://laborcenter.berkeley.edu/low-wage-work-in-california/.