The San Mateo County Blue Ribbon Task Force recommended coverage for uninsured adults below 400 percent of the federal poverty level (FPL) living in San Mateo, estimated at 36,000-44,000 individuals. The Task Force further recommended that the program be funded through shared responsibility between the public, individuals and employers. Public funds would come from a mix of new state revenues and redirection of existing revenues. Individuals would pay a share of cost on a sliding scale based on income. This report addresses options for employer participation and assesses the potential revenue that may be generated.

The health access expansion is taking place at a time of declining job-based coverage in the state and the nation. The share of individuals with employer sponsored coverage in California fell by five percent points between 2000 and 2006.1 A policy of shared responsibility between the public, the participants and employers serves the dual function of raising revenue for the program and avoiding the creation of an incentive for employers with lower wage workforces to drop coverage once the new program becomes available.

Kronland and Leyton 2007 provided the Blue Ribbon Commission a detailed legal analysis of options for employer participation. We focus on models consistent with three of the policy optioned outlined in their report:

Each of these options would require action by other political bodies along with the San Mateo Board of Supervisors. A payroll tax would require a two-thirds vote of the electorate.2 A fee would likely require authorization through state law. Such a fee would need to have a reasonable relationship to the “burden” the fee addresses or the “benefit” to the firms paying the fee.

An employer health spending requirement would set a minimum standard for employers on health care spending, in the same way that local governments may set a higher minimum wage. Employers are required to spend a minimum amount on health services for their employees, broadly defined. Since this uses the County’s police powers, the County would have jurisdiction only over unincorporated areas. The requirement could be extended to incorporated areas through a Joint Powers Authority with each city that chose to be included.

Employee Retirement Insurance Security Act (ERISA) preempts state and local laws that require the modification or adoption of employee benefit plans.3 To avoid ERISA preemption Kronland and Leyton recommend that employers have an option for compliance that does not involve setting up their own ERISA plan or increasing their spending on an existing plan and that employers receive a sufficient benefit from that non-ERISA option such that it is a realistic one.

Using the 2000 Census, we estimate that 71 percent of private sector employees who live in San Mateo County also work in the County, while 59 percent of private sector employees who work in the County are also residents (Table 2). Commuters to San Francisco and San Mateo County account for nearly one-third of those who live in the County and work outside, while commuters from those two counties account for one-quarter of those who live outside San Mateo and commute in. 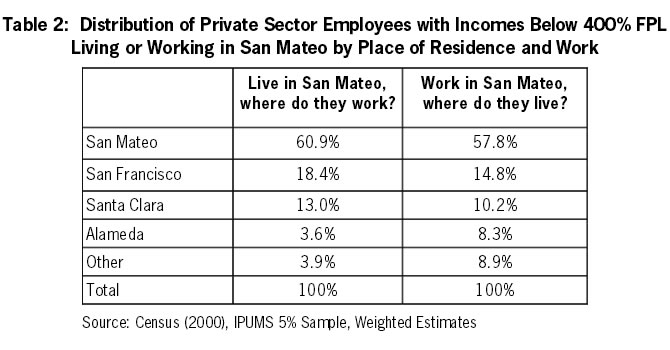 According to the Quarterly Census of Employment and Wages, there were 306,000 private sector employees between 19 and 64 in San Mateo County in 2006. Using the California Health Interview Survey, we estimate that 40,000 of those workers do not have health insurance, 35,000 of whom are in families with incomes under 400% FPL. Using data from the table above, we estimate that 20,400 of those workers live in San Mateo County (Table 3). This is the population we use for our estimates.

Each of the models presented below is premised on the assumption that employers are required to meet the minimum standard or contribute on all employees who:

Any employer requirement will need to be directed as closely as possible at the target group, in this case, workers under 400% of FPL. In order to protect worker’s privacy and avoid the potential for discrimination (or perception of discrimination) in hiring, we recommend that any criteria for covered workers be based on earnings in that firm, not family income. Since the Federal Poverty Level is based on family income, the earnings level should be set to correspond as closely as possible with a family income of 400% of FPL.

Table 4 shows the distribution of uninsured private sector employees by salary and FPL. This information is useful to set the value at which wages would be capped on payment into the program. Employers would be required to contribute only for those uninsured workers earning below this maximum. Since employers’ contribution depend on wages, while access to the Health Program depends on FPL, setting a cap on wages generates ‘exclusion’ and ‘inclusion’ errors: First, if the wage cap is set very high, then it is more likely that a large number of uninsured workers above 400% FPL would have contributions made on their behalf to the program (‘inclusion error’). Second, if the wage rate is set very low, a large number of workers below 400% FPL are likely to be excluded (‘exclusion error’). 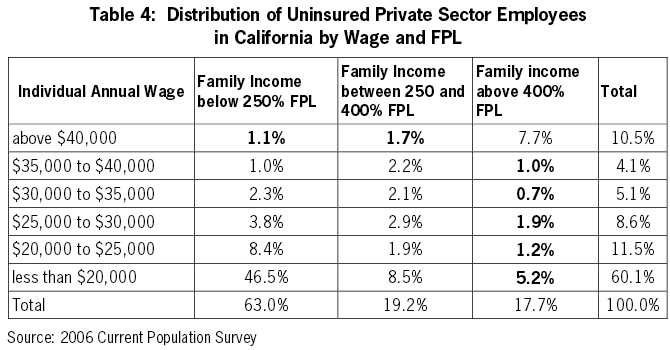 In this section we provide revenue projections for three program options. Each of these options could be used equally with a payroll tax and credit for health spending, a mitigation fee, or a health care spending requirement.

This option follows the requirements of the San Francisco Health Care Security Ordinance. Taking into account the exemption of small businesses with fewer than 20 employees, firms employing 13,000 of the 24,000 uninsured who live and work in San Mateo County would be covered under the policy. With full participation by employers and individuals, this option would generate $35 million a year for the program from employers (Table 5).

This option mirrors the current hourly health spending requirement in the Quality Standards Program at the San Francisco International Airport, San Mateo County’s largest employer. Option 2 applies to all firms, so would increase the number of employees potentially covered to the full 20,400, and the total revenue from employers to $47.8 million (Table 6).

Using a percentage of payroll follows the methodology in the proposed state health care legislation. In this model, required health spending would be indexed to wages. Wages generally grow at a slower pace than health premiums. Total revenue from employers with full participation would be $26.8 million.

Additional sources of revenue would include individual payments and potential collaborative agreements with surrounding Counties.

Collaborations with Other Counties

San Francisco’s current policy is to provide Health Reimbursement Accounts for workers who do not live in the County and are not eligible for the local program. San Mateo could seek a reciprocity agreement with San Francisco so that funds collected from employers would be transferred to the county of residence and workers would be eligible to enroll in the health program of their county of residence at the discounted rate. As shown in Table 2, 18% of working San Mateo residents in families under 400 percent FPL work in San Francisco. With full participation by San Francisco employers, this would result in $9.6 million in additional annual revenue for the County program.

For this analysis we assume that individuals whose employers pay into the program receive a 75% discount on the individual fee. We assume individual fees on the following schedule:

Table 9 shows expected employee contributions to the fund from uninsured private sector employees who are below 400 percent FPL, live in San Mateo and work in either San Mateo or San Francisco.

Table 10 provides an estimate of contributions to the fund from uninsured people who are below 400 percent FPL, live in San Mateo, and do not work for an employer that would contribute to the program, and are therefore not eligible for the discounted rate.

If businesses with fewer than 20 employees are excluded from the employer requirement as in option 1, then the number of workers eligible for the discount falls and those who pay in full rises. The total collected from individuals would rise to $9.2 million, compared to $6.7 million for options 2 and 3 (Table 8).

The models we analyzed have the potential to bring in between $43 and $64 million a year into the Adult Health Care Expansion Program (Table 12). Given the commute patterns of County residents and workers, joint agreements with adjacent Counties would increase program viability.

The projections are based on full enrollment. To the degree that employers and individuals chose not to participate in the program both the revenues and expenses would be lower than projected.

The estimates presented do not take into account crowd-out—employers and employees dropping private coverage and shifting to the County Health Program. We find that of the 95,000 private sector employees who live and work in San Mateo County and have incomes under 400% FPL an estimated 55,000 have health coverage on the job.

An employer spending requirement would significantly reduce the incentive for employers to drop coverage, while providing a low-cost health care option for firms that do not currently provide coverage to their workers. It would also serve to stabilize job-based health coverage in the County at a time when the share of workers with job-based health insurance has fallen 5.2 percentage points in the State since 2007.5 We are not able to assess how the different options would effect crowd-out. In general, the more the health spending requirement matches current spending, the less likely employers are to drop coverage. In California, the average employer spends close to 8% of payroll on health care and 11.2% on those workers who have job-based coverage.6

The estimates also assume that San Mateo employers will not measurably alter employment practices in response to the spending requirement. We anticipate an impact on business costs equivalent to a similarly sized increase in the minimum wage. Research on state and local minimum wage increases has found no measurable impact on employment from similarly sized increases. Employer offer is lowest in non-mobile industries, such as retail, construction and hospitality.7 San Mateo’s neighbor to the north, San Francisco, already has a similar requirement, which further reduces the risk of business relocation.

The long term viability of any program will depend on how well revenues keep up with program costs. Option 3 would effectively index the employer requirement to wage inflation. Health
inflation has significantly exceeded wage inflation over the last decade.8 The San Francisco legislation indexes the employer share to the average spending by the ten largest California Counties on single coverage, and so more closely tracks health care costs.