HomePublicationsBlogMore than half of California adults have job-based coverage

This is the second post in the Labor Center’s blog series “Rising Health Care Costs in California: A Worker Issue.”

In 2018, more than half (58 percent) of California’s 24.2 million adults ages 19 to 64 had health insurance through their own employer or a family member’s employer, based on analysis of data from the U.S. Census Bureau’s Current Population Survey (CPS). Job-based coverage is private health insurance offered by small and large employers to employees and typically their spouses and children.

The percentage of California adults with job-based coverage has been relatively stable since 2002, except for a decline in coverage rates during the Great Recession and subsequent economic recovery. 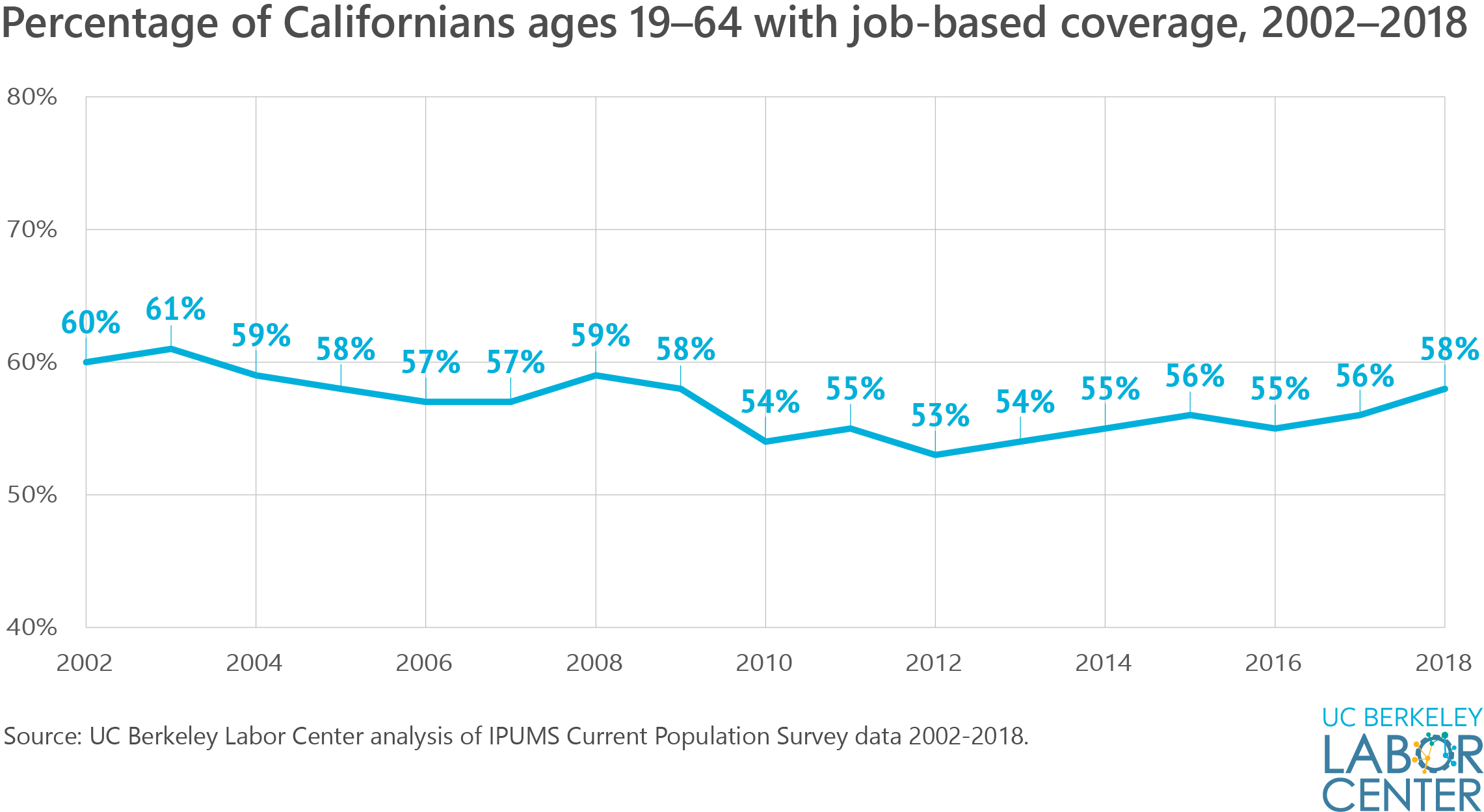 The percentage of California children below 19 years with job-based coverage through a parent remained relatively stable over the same time period, hovering around 50 percent.

What other sources of coverage do California adults have?

Besides the 58 percent of adult Californians who in 2018 had job-based health coverage, 16 percent had Medi-Cal (California’s Medicaid program for low-income individuals); 11 percent had individual market coverage purchased directly from an insurer or through Covered California; 4 percent had other public coverage such as Medicare for disabled adults under age 65 or military/veterans coverage; and 11 percent were uninsured (based on analysis of CPS data). 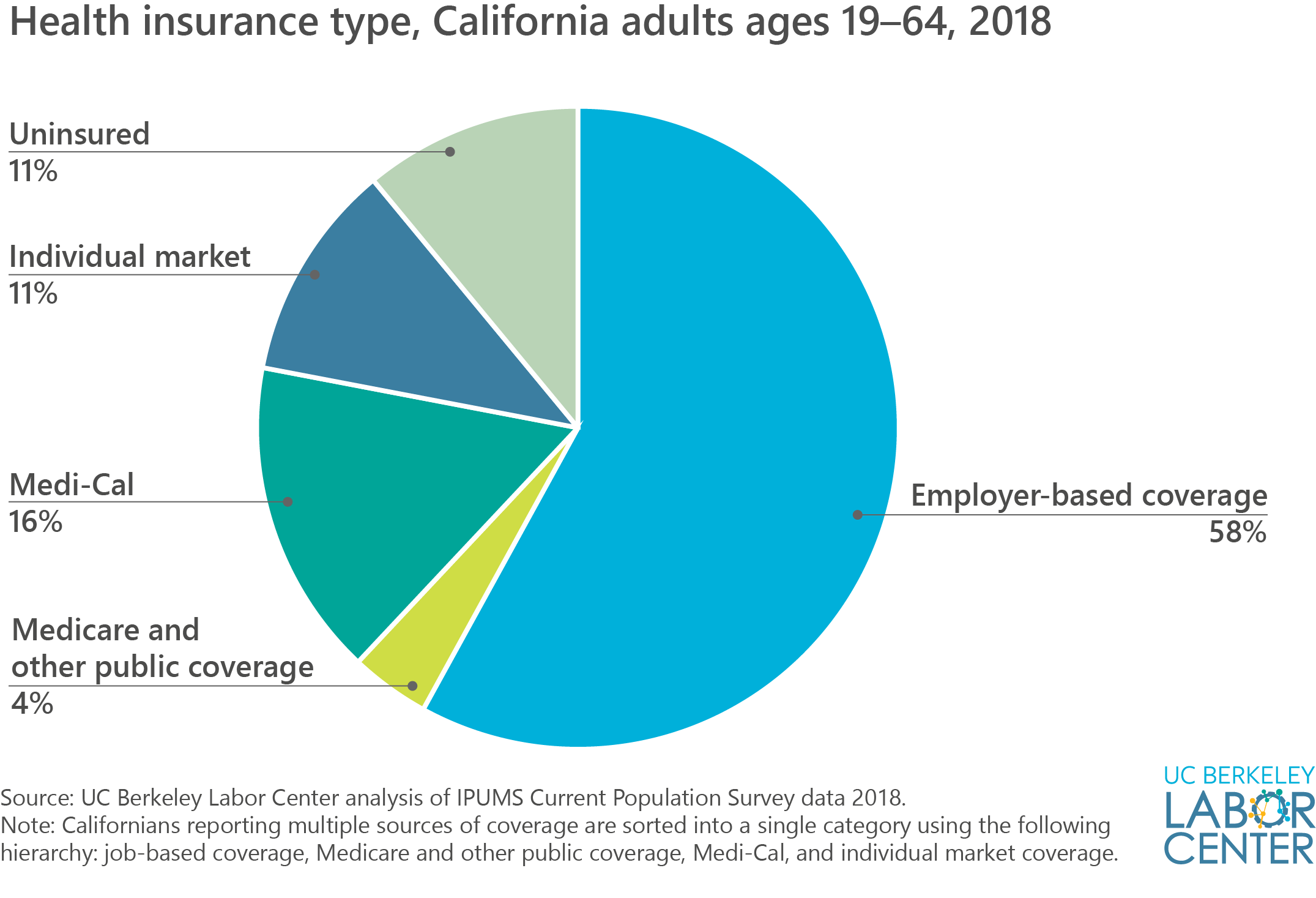 How does job-based coverage compare to other sources of health coverage?

The research is clear that having insurance is associated with improved access to health care, better health outcomes, and improved financial security, compared to being uninsured. But how does having job-based coverage compare to having Medi-Cal and individual market coverage, the two other largest sources of coverage for California adults? The differences between insurance types greatly depend on each individual’s circumstances, but we are able to provide a general comparison of the three primary insurance types in terms of comprehensiveness of benefits, access to care, ease of enrollment, and cost.

Under the Affordable Care Act, Medicaid coverage, individual market plans, and plans offered by small employers are required to offer ten categories of essential health benefits. Coverage offered by large employers is not subject to this federal requirement but California law requires that all state-regulated health plans cover basic health care services when those services are medically necessary. Medi-Cal also covers home and community-based services that are not typically covered in private plans. Medi-Cal coverage includes some dental benefits. Employers sometimes offer dental coverage alongside medical insurance and people enrolled in the individual market can purchase dental coverage separate from their health plan.

Across all types of insurance, access to care varies by plan, geographic region, and an individual’s needs. In 2015, physician participation in Medi-Cal was lower (62 percent of primary care doctors) than participation in private insurance (86 percent of primary care doctors), indicating that some Medi-Cal enrollees may have more difficulty accessing care than individuals with job-based coverage or individual market insurance do.

Job-based coverage is paid for through employer and worker premium contributions using pre-tax dollars. Most job-based plans also require that workers pay when they or their family members access care, typically via co-payments or deductibles, but the amount varies significantly by firm and plan, and is usually dependent on how much care an individual needs. Among Californians with job-based coverage through a large employer (excluding self-insured plans in which employers assume the financial risk for providing health benefits), the vast majority (93 percent) had a “Gold” plan or better in 2018, meaning that the insurer paid an average of at least 80 percent of covered medical expenses and the individual paid the remainder in cost sharing. (In a future blog post, we will present more information about premiums and deductibles for California workers with job-based coverage and how those costs have changed over time.)

In contrast to job-based coverage and the individual market, most individuals enrolled in Medi-Cal pay no premiums or cost sharing.

Up next: Our next blog post will describe the inequities in access to job-based coverage for low-income, black and Latino, immigrant, and young adult workers in California.