As the end of the first year of the Obama Administration approaches, the U. S. Congress is debating legislation that would transform the American health care system. On November 7, the House of Representatives narrowly passed reform legislation, and on November 21, the Senate narrowly broke a Republican filibuster to bring the legislation to the Senate floor. Passage of reform legislation would alter not only public programs such as Medicare and Medicaid, but also set new standards in the employer-based system, the source of coverage for approximately 161 million Americans less than 65 years in age.1

Data for this study are from the 2009 California Employer Health Benefits Survey sponsored by the California HealthCare Foundation (CHCF) and conducted by National Opinion Research Center at the University of Chicago. The 2009 study data are from 827 private firms with establishments in California. More information on study methods is available in the technical appendix.

Both House and Senate bills require employer-based plans to have annual limits on out-of-pocket expenses. The House legislation stipulates that the out-of-pocket limit cannot exceed $5,000 for single coverage, whereas the Senate sets the limit at $5,950.2 The limits in the Senate bill would not apply to self-insured plans. The 2009 CHCF Employer Benefits Survey asks about out-of-pocket limits with defined categories. With regard to the House requirements, 23 percent of workers with employer-based insurance are enrolled in a plan either without an out-of-pocket limit or a limit exceeding $5,000 (Exhibit 1). The figures are nearly identical for the Senate bill. Most non-compliant plans have no limits, and are either an HMO or POS plan with little cost-sharing, usually in the form of copayments. Insured workers of small employers (3 to 49 workers) are more likely not to have the protection of out-of-pocket limits than larger employers.

Both House and Senate bills would prohibit the use of lifetime maximum benefit limits. The House bill would also prohibit the use of annual maximum benefit limits, while the Senate bill would prohibit “unreasonable” annual limits. The questionnaire for the CHCF only asks about lifetime limits. Over 40 percent of insured employees are enrolled in a plan with a lifetime limit (Exhibit 1).3 PPO and high deductible plans with and without savings accounts are most likely to currently have lifetime maximum limits. 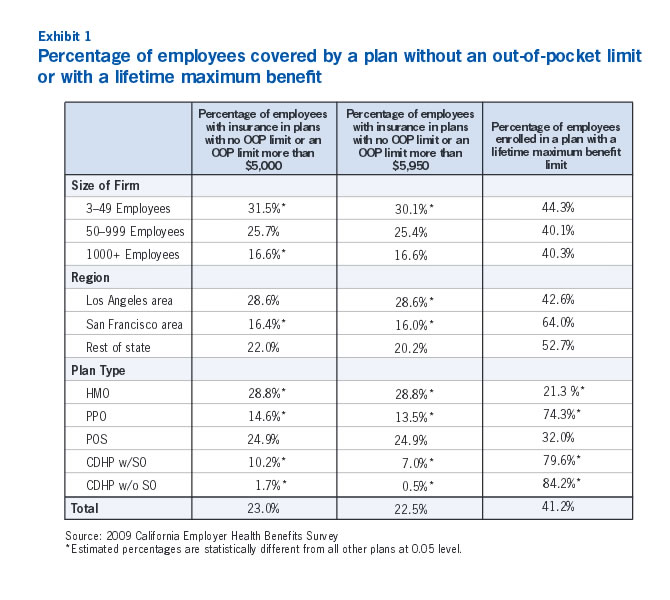 Preventive Benefits Subject to a Deductible 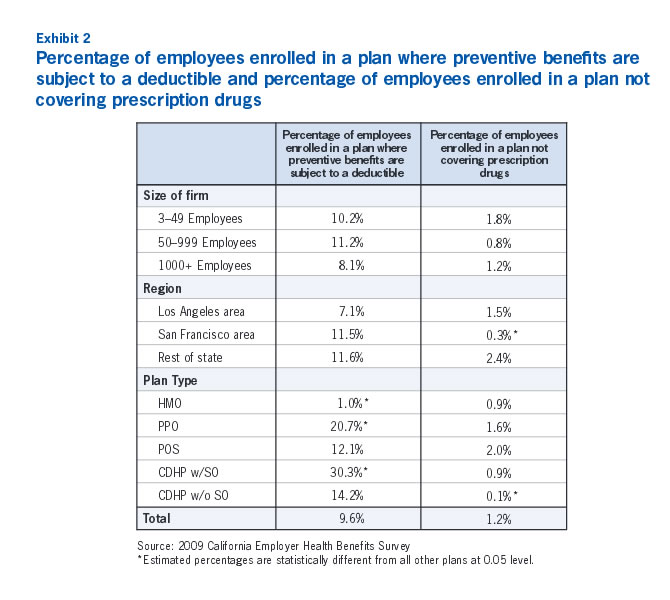 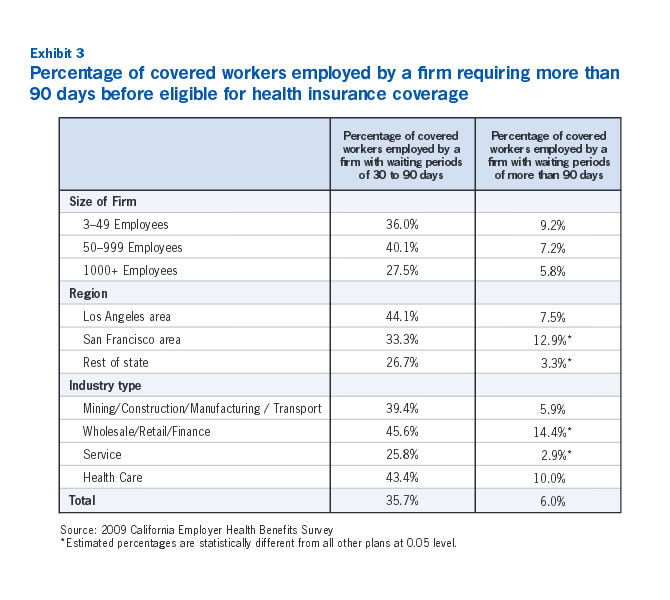 Required Contributions for Premiums by Employers 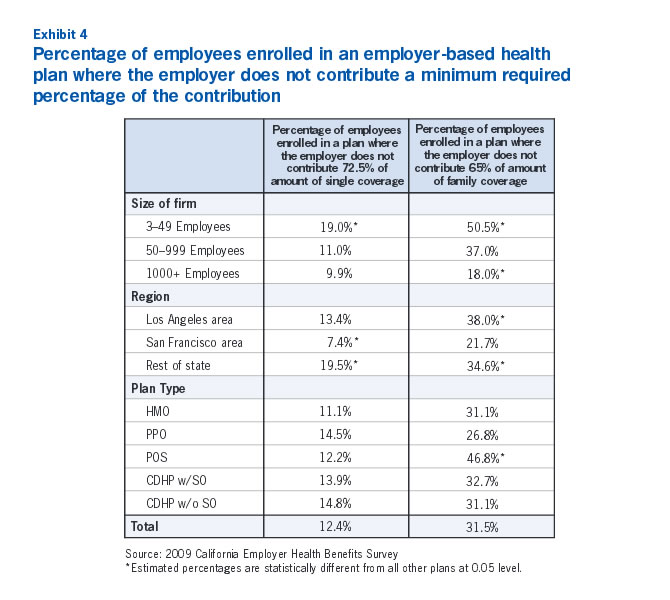 The Senate legislation calls for an excise tax in 2013 on health plans that exceed $8,500 for single coverage and $23,000 for family coverage.4 Assuming an annual rate of increase in premiums of seven percent a year, the tax would apply to plans in 2009 costing $6,484 or more for single coverage and $17,547 for family coverage. As depicted in Exhibit 5, 17 percent of insured workers with single coverage and 14 percent with family coverage are enrolled in a plan that would be liable to the excise tax. These estimates do not take into account the cost of flexible spending accounts, dental and vision benefits, and contributions for savings options in health savings accounts (HSAs) and health reimbursement arrangements (HRAs). Hence, these figures should be regarded as minimum estimates. Equivalent percentages of employees by firm size would be subject to the excise tax. Employees from the San Francisco area are more likely to be enrolled in a plan subject to the excise tax than employees residing in other regions of the state. PPO plans are most likely to be subject to the excise tax compared to other plans. 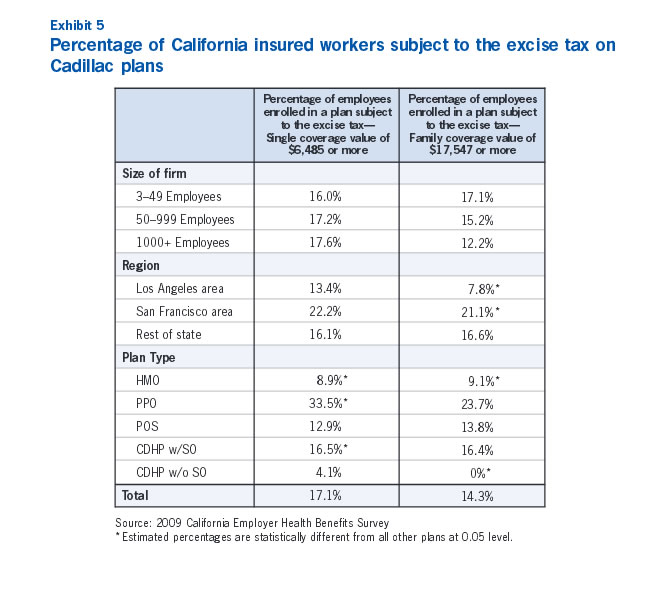 Plans with Actuarial Values of Less than 60 Percent 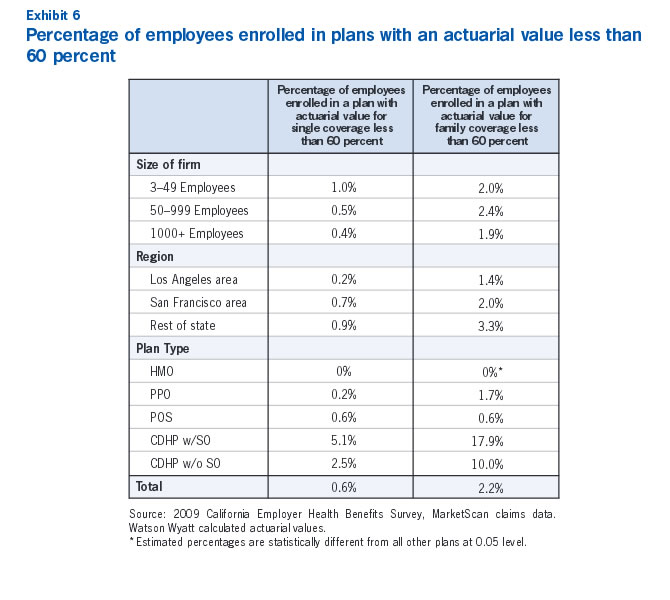 Much of the discussion about health reform has been targeted at plans offered on the Exchange. The hot-button issues of abortion and the public plan illustrate the considerable attention that Exchange plans have received. This issue brief has identified how persons currently receiving health insurance from their employer will also be affected by reform. In most cases, reform will increase the amount of financial protection employees receive.

The largest number of insured workers (41 percent) will be affected by the House and Senate’s requirement that plans not have maximum benefit limits. However, 89 percent of plans with maximum lifetime limits in 2009 had limits of $2,000,000 or more, so the impact of this change will be minimal on most employers but would be quite meaningful for the small number of employees who meet the limits. Data on annual limits are not available from the CHCF California Employer Benefits Survey. The House bill’s requirement that employers contribute a minimum of 65 percent of the cost of family coverage will affect nearly one-third of covered workers in California. Nearly one-quarter of insured workers will gain the protection of an out-of-pocket limit. However, many of these workers are currently enrolled in either an HMO or POS plan and subject to relatively little cost-sharing for medical services. Legislation will reduce waiting periods for eligibility for coverage. More than 40 percent of insured workers employed by a firm presently face a waiting period of more than 30 days, but these firms will now face financial penalties for a waiting period over a month.

Perhaps the most controversial of the new requirements for employer-based insurance is the “Cadillac” excise tax of 40 percent. We estimate that the tax will affect about 17 percent of insured workers with single coverage and 14 percent of workers with family coverage. These estimates do not include the cost of flexible spending accounts, dental and vision benefits, and savings accounts in HSAs and HRAs, and hence are minimum estimates. A recent survey by the benefits consulting firm of Mercer found that employers over the premium threshold are likely to respond as health economists predicted with two-thirds of firms raising deductibles. Others would reduce flexible spending account maximums.5 Hence, the effect of the excise tax will be to increase out-of-pocket expenses for medical services, while reducing the total cost of premiums below what it would be without the tax.

In summary, while the vast majority of employees work for firms that currently comply with most of the new standards, reform legislation if passed would still bring about changes for many insured workers in California in their plan provisions. Employees of firms that buy insurance in the small group market will be most affected by these changes. Consequently, reform will affect not only persons who are currently uninsured or purchasing individual insurance, but persons currently receiving health insurance from their or their spouse’s employer.

California HealthCare Foundation (CHCF) and the National Opinion Research Center (NORC) jointly produce the California Employer Health Benefits Survey. Researchers at NORC design and analyze the survey results. National Research LLC (NR) administers the telephone survey. Findings from the 2009 survey were derived from a random sample of 827 interviews with employee benefit managers in private firms in California. NR conducted interviews from April to July 2009. The sample of firms was drawn from the Dun & Bradstreet list of private employers with three or more workers. The margin of error for responses among all employers is +/- 3.4 percent.

To control for item non-response bias, missing values within these variables were imputed using a hot-deck approach. NORC researchers calculated weights as follows: First, the basic weight was determined, followed by a survey non-response adjustment. Next, to reduce the influence of weight outliers, NORC researchers trimmed weights. Finally, a post-stratification adjustment was applied.

Our thanks to Janet Dawson and Jenifer MacGillvary for their help in the preparation of this issue brief.