Starting in 2014, the ACA will fundamentally change the individual insurance markets throughout the country. Insurers will be required to issue policies to anyone seeking health coverage (known as guaranteed issue) and will no longer be allowed to set premiums or deny coverage based on health status or previous spending. Instead, insurers will only be allowed to vary premiums based on a limited set of personal characteristics (age, smoking status, geographic location and family size), known as modified community rating. To avoid adverse selection, where individuals avoid buying coverage until they need it, the ACA requires virtually all individuals to either purchase or enroll in insurance coverage through Medicaid, Medicare, the Children’s Health Insurance Program, their employers, or the individual insurance market. Those who fail to comply with this minimum coverage requirement will be subject to a penalty administered through the personal income tax system that will be phased in starting in 2014 and will equal 2.5% of modified adjusted gross income or $695 per person (up to a maximum of $2,085 per household) in 2016.

As a result of these changes due to the ACA, we estimate that an additional 1.91 million non-elderly Californians will have insurance coverage in 2019 (Exhibit 1). An estimated 3.02 million Californians would have coverage through the newly created California Health Benefit Exchange (CHBE) or the individual market outside of the Exchange.

Without the minimum coverage requirement, the ACA would still allow Californians to purchase guaranteed issue, modified community rated coverage anytime regardless of health status, gender, pre-existing conditions, or other risks. However, there would be no penalty for people who remain uninsured and wait until they have high medical costs to obtain insurance. This would result in lower costs for those who forego insurance coverage, and a larger proportion of Californians being uninsured. Furthermore, the individual insurance market would be subject to adverse selection, where sicker, more expensive individuals and those who want to use more health care services would be more likely to buy insurance.

Removing the requirement to obtain insurance from our CalSIM model, we find that the number of newly insured would be 1.04 million (or 54%) lower in 2019 than under the ACA with the coverage requirement (Exhibit 1). 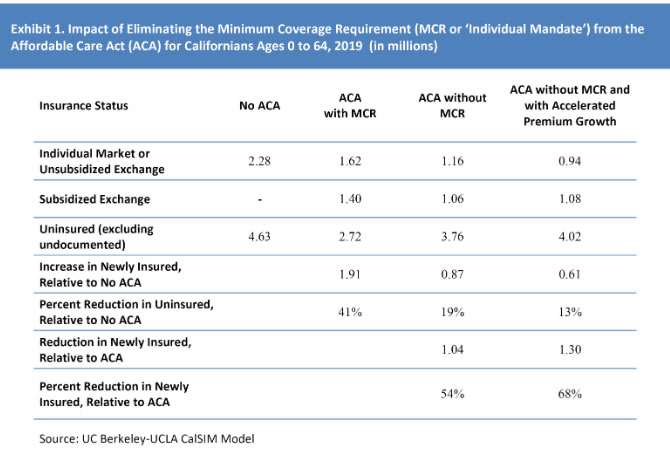 The last column in Exhibit 1 shows the combined effect of removing the minimum coverage requirement and higher premium growth that is likely to occur due to adverse selection. Chandra et al. (2011) found that individuals who purchased health insurance in Massachusetts prior to the implementation of that state’s minimum coverage requirement had 45% higher health care expenditures than those who did not purchase health insurance coverage until after the requirement was implemented.[1] Because the subsidies available in Massachusetts are more generous than those available under the ACA, adverse selection in California and the rest of the nation could be greater if the requirement is eliminated.

To model the impact of adverse selection, we assumed a 15.4% per year growth in premiums from 2014 to 2019 (or an additional 7.9% per year over our baseline assumption for premium growth). This premium increase is based on the current average rate of growth in premiums in the pre-ACA individual insurance market.[2]

When this higher growth rate in premiums is combined with the impact of eliminating the minimum coverage requirement, we estimate that only 610,000 Californians will be newly insured in 2019, a number that is 68% lower relative to the ACA with the minimum coverage requirement, and which represents only 13% of the eligible uninsured (Exhibit 1). Under these assumptions, the size of the Exchange and individual market falls to 2.02 million due to the higher cost of coverage. In addition, the population that purchases insurance in the individual market and the Exchange is both older and more likely to have one or more chronic illnesses relative to the population in these markets under the ACA.

Our findings of a decline of 54-68% in the newly insured if the minimum coverage requirement was eliminated are similar to those of other researchers who have modeled the impact at the national level. The Congressional Budget Office projects that 50% fewer individuals would be covered under the ACA without this requirement, while Gruber (2011) estimates that 75% fewer would be covered.[3] Sheils and Haught (2011) find a smaller impact, with a 25% reduction in the number of individuals covered.[4]

Eliminating the minimum coverage requirement (or individual mandate) under the ACA would substantially lower the number of newly insured Californians by 2019 and would undermine the goal of the law to substantially increase health insurance coverage for the nation’s uninsured population.

The California Simulation of Insurance Markets (CalSIM) model is designed to estimate the impact of various elements of the ACA on employer decisions to offer insurance coverage and individual decisions to obtain coverage in California. The CalSIM model uses four data sources: the 2004–2008 Medical Expenditure Panel Survey (MEPS) Household Component (MEPS-HC) and the Person Round Plan (MEPS-PRPL) public use data files, the 2009 California Health Interview Survey (CHIS), California Employment Development Department (EDD) 2007 wage distribution, insurance offer, and firm size data, and the 2010 California Employer Health Benefits Survey (EHBS). CHIS, EDD and CEHBS provide weights and wage distributions that adjust the nationally-representative MEPS data to build a California-specific model. Once re-weighted, the MEPS-HC respondents are then assumed to represent the population of California. However, MEPS-HC does not include data on immigration status, and until 2007 did not report whether an individual was born in the United States. We therefore constructed a regression model using CHIS 2009 confidential data to predict the immigration status of MEPS-HC respondents based on a variety of socioeconomic, demographic and family characteristics. By accounting for immigration status within the individual dataset construction process, the CalSIM model is able to adjust Medi-Cal and Exchange eligible populations based on undocumented immigrant and recent legal permanent residence status before determining firm and individual coverage decisions, rather than imposing an ex post adjustment. This approach enables a more accurate picture of the Medi-Cal and Exchange eligible and enrolled populations in California. However, it is limited by the sensitivity of the logistic regression modeling approach and predicted immigration status propensity scores.

Individuals are then identified as workers and non-workers (i.e., the unemployed and the respective dependents/ spouses of workers). Workers are assigned employer wage distribution characteristics from EDD 2007 data based on firm size and insurance offer status from their MEPS record. The firms are then statistically matched to the Employer Sponsored Insurance (ESI) data from the 2010 CEHBS, which contains additional information on the actuarial value of the health plans offered. The matched dataset is used to create synthetic firms consisting of workers and their families, who then choose to participate in different aspects of the ACA, such as taking up coverage or dropping coverage. These decisions, once made by the firm and linked to each employee and their families, allow for individual probabilities to be assigned for insurance choices depending on family characteristics such as household income, health status, cost, availability of other coverage options, and immigration status.

The California Simulation of Insurance Markets (CalSIM) model was created by the UC Berkeley Center for Labor Research and Education and the UCLA Center for Health Policy Research with funding from The California Endowment. For further information, please visit http://www.healthpolicy.ucla.edu/pubs/files/calsim_methods.pdf.

The UCLA Center for Health Policy Research and the UC Berkeley Center for Labor Research and Education thank The California Endowment for their support of this policy note and the creation of the California Simulation of Insurance Markets (CalSIM) model. Specifically, we thank Robert Phillips and Richard Figueroa, our project officers for this endeavor. We also thank E. Richard Brown and David Grant for their work on the California Health Interview Survey, which makes the California-specific estimates calculated here possible.