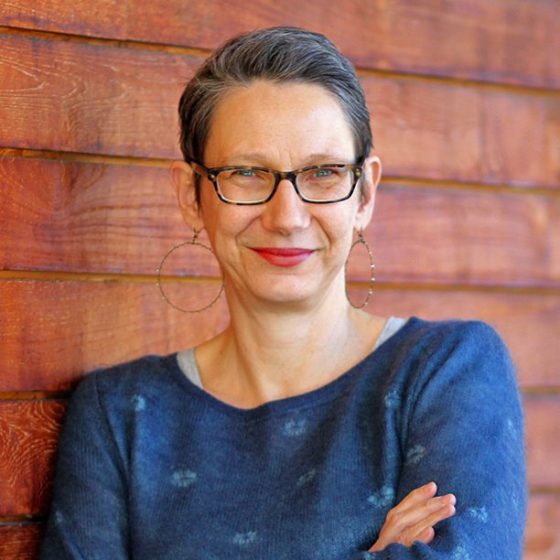 Annette Bernhardt (she/her) is director of the Technology and Work program at the UC Berkeley Labor Center, and a senior researcher at the UC Berkeley Institute for Research on Labor and Employment. She recently was visiting professor in the UC Berkeley Sociology Department, as well as a fellow at the Roosevelt Institute. Previously she was policy co-director of the National Employment Law Project, where she coordinated policy analysis and research on living wage standards, enforcement of workers’ rights, and accountable development. A leading scholar of low-wage work, Dr. Bernhardt has helped develop and analyze innovative policy responses to economic restructuring in the United States.

She was one of the principal investigators of the landmark study Broken Laws, Unprotected Workers, which documented high rates of minimum wage, overtime, and other workplace violations in the low-wage labor market. She has also been a leader in collaborating with immigrant worker centers and unions to develop innovative models of community-based research. Her current research focuses on domestic outsourcing, the gig economy, and the impact of new technologies on low-wage work. Dr. Bernhardt’s books include the co-edited The Gloves-Off Economy: Workplace Standards at the Bottom of America’s Labor Market. She has published widely in journals such as the American Journal of Sociology, the American Sociological Review, and the Journal of Labor Economics, among others. Dr. Bernhardt received her Ph.D. in sociology from the University of Chicago in 1993.

California’s Labor Market in the Time of COVID-19

This data tool tracks the effects of the COVID-19 pandemic on workers in California, and how the state is recovering from these effects. The pandemic left millions of Californians out of work, and while the economy has begun to recover in recent months, some workers continue to struggle. This resource will be updated periodically, as new data becomes available, to allow users to monitor the progress of labor markets in the state. Last updated May 18, 2022.

Independent Contracting in California: An Analysis of Trends and Characteristics Using Tax Data

In this report, we leverage recent innovations in analyzing tax data to shed new light on the prevalence and characteristics of independent contracting in California.

The UC Berkeley Labor Center’s Technology and Work program provided input to the White House Office of Science and Technology Policy (OSTP) initiative on developing a Bill of Rights for an Automated Society.

Data and Algorithms at Work: The Case for Worker Technology Rights

This groundbreaking report provides a new and comprehensive set of policy principles for worker technology rights in the United States.

This month the U.S. Department of Labor released its employment projections for the next decade. We analyzed the job quality of the occupations projected to grow the most during this period, focusing specifically on low-wage jobs.

A workplace tech accountability bill would force employers to tell workers they’re being spied on and would ban surveillance outside of work.

So your employer is monitoring you. What you should know

Annette Bernhardt, Lisa Kresge, and Reem Suleiman of the UC Berkeley Labor Center argue that companies should be required to reveal “which activities will be monitored, the method of monitoring, the data that will be gathered, the times and places where the monitoring will occur, and the purpose for monitoring and why it is necessary.”

Employers are gathering data on your work habits. California labor advocates want to change this

Annette Bernhardt, along with Lisa Kresge and Reem Suleiman of the labor center, released a report on Wednesday outlining how employees in a variety of industries are tracked and surveilled in the course of doing their jobs, and what rights workers should have over how information about them is collected, stored and used.

The Sharing Economy Will Survive the Pandemic. Is That a Good Thing?

Instead, policymakers should focus on traditional approaches that will boost the economy as a whole. Pandemic responses should aim to support businesses and workers—both salaried and non-salaried—alike, addressing inequality through a focus on its root causes and industry-level trends. This last point was captured by Annette Bernhardt, a labor economist at U.C. Berkeley, who found little evidence of “a strong, unambiguous shift toward nonstandard or contingent forms of work—especially in contrast to the dramatic increase in wage inequality.”

“BLS statistics are just not picking up workers who do independent contracting on the side, for supplemental income in addition to a W-2 job,” says University of California economist Annette Bernhardt PhD., author of “The Gloves-off Economy.” “This is a real significant challenge to understanding what’s going on in the labor market.”

Commentary by Derecka Mehrensand Annette Bernhardt in The Mercury News

Much of the automation-driven jobs losses that basic income seeks to remedy may still be decades, if not generations away. In the meantime, it’s important to remember that work will remain the primary source of income for workers and families now and for the foreseeable future. Good jobs still matter.

California has a serious low-wage jobs problem, and it’s only gotten worse over the past 15 years.