More than 310,000 Californians Working for Large Firms Predicted to be Enrolled in Medi-Cal in 2014 under Affordable Care Act

California Assembly Bill 880 would impose a penalty on large private employers who have non-disabled employees who enroll in Medi-Cal. In this fact sheet, we analyze the number of working Californians expected to enroll in Medi-Cal after the Afford-able Care Act is implemented. Approximately 250,000 Californians working for firms with 500 or more employees are currently enrolled in Medi-Cal, close to half (44%) in the retail and restaurant industries. In 2014, between 60,000 and 100,000 additional individuals working for large employers are expected to become newly eligible for and enroll in Medi-Cal under the Affordable Care Act (ACA), for a total of between 310,000 and 350,000 enrollees. By 2019, an estimated 350,000 to 380,000 employees of large firms will be enrolled in the program.

In 2014, low-income adults will be eligible for Medi-Cal under the ACA if they are under age 65, meet the immigration status criteria, and have household income below $15,850 for a single individual or $32,500 for a family of four. This eligibility expansion makes non-disabled adults without children living at home eligible for the first time and increases the income limits for parents. Many Californians who are currently or newly eligible for Medi-Cal are employed, and a significant share work full time. Under the ACA eligibility expansion, a single individual earning $10 per hour for 30 hours per week would be eligible for Medi-Cal, as would a family of four with both parents working 30 hours per week earning $10 per hour. These workers are considered “full time” under the ACA definition.1

Under the ACA, low- and middle-income California families who are not eligible for Medi-Cal or Medicare or affordable job-based coverage can enroll in federally-subsidized insurance coverage in 2014 through the state’s health benefit exchange, Covered California.

Assembly Bill 880, recently introduced in the California Assembly, would impose a penalty on private employers with 500 or more workers who have employees that enroll in Medi-Cal. Public employers would be exempt. The penalty would apply to on-disabled workers under age 65 working at least 8 hours per week who are currently eligible for Medi-Cal as well as those who will become newly eligible in 2014 under the eligibility expansion. The penalty would be used to pay for the non-federal state share of Medi-Cal for the workers on Medi-Cal and to increase the reimbursement rates paid to Medi-Cal providers.

We estimate that the current Medi-Cal enrollee population includes 250,000 non-disabled workers under age 65 working at least 8 hours per week for private firms with 500 or more employees. A significant share of this workforce is employed in two industries: 27% in the retail industry and 17% in the restaurant industry, based on our analysis of the Current Population Survey.2

Under the ACA, the number of working Californians enrolled in Medi-Cal is predicted to increase to between 310,000 and 350,000 in 2014 due to the eligibility expansion. In 2019, between 350,000 and 380,000 Californians working for large firms are expected to enroll (Exhibit 1). These estimates reflect the number of workers for whom employers would be subject to penalties under Assembly Bill 880. 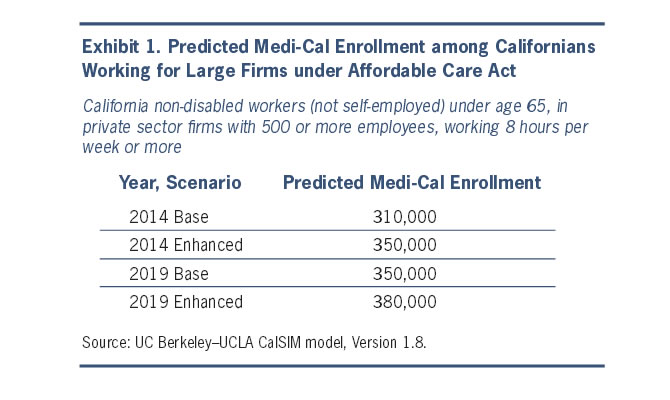 This fact sheet uses the California Simulation of Insurance Markets (CalSIM) model, version 1.8. The model is designed to estimate the impacts of various elements of the ACA on employer decisions to offer insurance coverage and individual decisions to obtain coverage in California. The model analyzes two scenarios: a base scenario in which take-up follows current enrollment patterns and an enhanced scenario in which California simplifies eligibility determination, conducts strong outreach and education, and adopts other measures to maximize enrollment. CalSIM uses data from the Medical Expenditure Panel Survey Household Component, the California Health Interview Survey, firm-level wage distributions from the California Employment Development Department, and the California Employer Health Benefits Survey to build a California-specific model. For further information, please visit http://www.healthpolicy.ucla.edu/pubs/files/calsim_methods.pdf.

Sample weights within the model were adjusted so that pre-ACA totals for the number of income-eligible workers enrolled in Medi-Cal matched those of the 2009 California Health Interview Survey. The calibration was slight and the modified model, when compared with previously published results, did not lead to any significant changes.

The California Simulation of Insurance Markets (CalSIM) model was developed with the generous support of The California Endowment. We would like to thank Xiao Chen, Miranda Dietz, Daphna Gans, Gerald Kominski, Jack Needleman, Nadereh Pourat, Dylan Roby and Greg Watson for their involvement in developing CalSIM.