In 2014, over 500,000 California residents will transition from the Low Income Health Program to health coverage provided by Medi-Cal or subsidized health plans offered in Covered California. This policy note focuses on the transition plans for the 27,000 higher income enrollees that will be eligible for sizeable federal subsidies in the state-based health insurance exchange, Covered California. A successful transition with high rates of participation relies on collaboration between the Department of Health Care Services, the local Low Income Health Programs (LIHPs) and Covered California. Enrollees will be moving into a complex system of premium payment, plan choice, subsidies and cost-sharing reductions and their engagement in the transition is necessary to result in enrollment in health plans by January 1, 2014. Recommendations to promote success include: applying administrative LIHP and DHCS data to ease the enrollment process in Covered California, collaborating in communication with LIHPs and other county programs, and targeted outreach with personal assistance for potential enrollees.

Due to the Affordable Care Act (ACA), an estimated 2.4 million Californians with incomes up to 200 percent of Federal Poverty Level (FPL) will be newly eligible for no-cost or subsidized health coverage in 2014 through the Medi-Cal expansion and subsidized health plan offerings in California’s Health Insurance Exchange, Covered California.1 In 2010, the Centers for Medicare and Medicaid Services approved California’s “Bridge to Reform” §1115 Medicaid Demonstration Waiver, which created the Low Income Health Program (LIHP). Counties receive partial federal reimbursement for providing health services through the LIHP to residents who will be newly eligible for coverage in 2014. Over 500,000 of the newly eligible individuals have enrolled in the LIHP since its inception in July of 2011 and will transition to Medi-Cal, California’s Medicaid program, and Covered California by January 1, 2014.2

LIHP enrollees are split into two income-based categories: Medicaid Coverage Expansion (MCE) enrollees with family incomes up to 133% of the FPL and Health Care Coverage Initiative (HCCI) enrollees with incomes above 133% and up to 200% FPL. Nineteen LIHPs operate to service LIHP-MCE enrollees in a total of 53 counties, yet few counties chose to offer services to HCCI enrollees.3 In December 2012, 26,375 of the 499,678 current enrollees, or five percent, were enrolled in the LIHP-HCCI program.4 LIHP-HCCI enrollment at the time of transition is estimated to be 30,000. Assuming some limited enrollment growth and the current income distribution remaining unchanged, approximately 27,000 will be eligible for coverage options through Covered California by December 2013.5

Additional background information on LIHP and the transition of LIHP-MCE enrollees to Medi-Cal is presented in: Smooth Transitions into Medi-Cal: Ensuring Continuity of Coverage for Low Income Health Program Enrollees.

The LIHP-HCCI program builds on a previous Coverage Initiative program undertaken by ten California counties from 2007-2010.6 Each of the ten counties created a Coverage Initiative program to serve individuals with family incomes up to 200% of FPL who were ineligible for Medi-Cal. Under the ‘Bridge to Reform’ §1115 Waiver of 2010 which created the LIHP, all California counties had an option to provide services to individuals with incomes up to 200% FPL and receive 50% federal reimbursement for the services provided.

Four counties that had participated in the 2007-2010 Coverage Initiative program chose to operate LIHP-HCCI programs: Alameda, Contra Costa, Orange and Ventura. The remaining six counties that participated in the 2007-2010 Coverage Initiative program transitioned their enrollees to LIHP, but opted not to open their LIHP enrollment to new HCCI enrollees. All other counties chose not to participate in the LIHP-HCCI. LIHPs choosing to offer an HCCI program component had to ensure that LIHP-MCE enrollees would have priority over LIHP-HCCI enrollees. 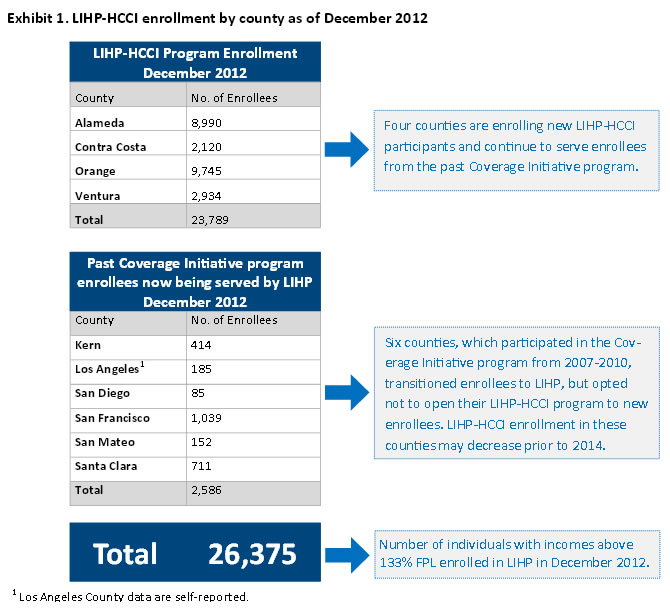 California was one of the first states to develop a state-based health insurance exchange authorized by the ACA, which has been conditionally approved to operate by the U.S. Department of Health and Human Services. The exchange, named Covered California, is a virtual market-place that allows citizens and lawfully residing immigrants, who do not have access to affordable employment-based coverage and are not eligible for Medi-Cal or other public coverage, to purchase subsidized health insurance if they earn up to 400% of FPL. Covered California health plans are also available to small employers through the Small Business Health Options Program (SHOP).7

The California Simulation of Insurance Markets (CalSIM) model predicts that 840,000 to 1.2 million individuals with family incomes below 400% FPL will purchase insurance offered through Covered California and receive income-based premium tax credits to subsidize the out-of-pocket cost of coverage in 2014.8 While CalSIM estimates that 840,000 Californians with incomes up to 200% FPL will be eligible for premium tax credits, enrollment in Covered California is expected to range from 36 to 54% (between 300,000 and 450,000 individuals) in 2014.9 The lower range of take-up represents the response if minimal outreach is performed while the upper range represents the response anticipated with targeted outreach and communications and a strong effort made to engage the newly eligible.

LIHP-HCCI enrollees are among those eligible for premium subsidies and cost-sharing reductions to lower their total cost of health care services. Premium contributions for this group may be as low as $40 per individual or $82 for a family of four according to the UC Berkeley Center for Labor Research and Education’s Premium Calculator (Exhibit 2). For LIHP-HCCI enrollees, subsidized monthly premium contributions vary by family size and annual household income; the total out-of-pocket expenditures are limited for deductibles, co-payments and other cost sharing.

Paying for health services will not be completely new to the LIHP-HCCI enrollees, but the requirement to pay a monthly premium and also a share of the services will be a significant change. LIHP-HCCI programs have various cost structures and none charge a monthly premium for enrollment. The maximum annual cost sharing amount may not exceed 5% of family income. LIHP-HCCI enrollees with incomes above 150% FPL are those most likely to have experience with cost sharing for health services such as prescriptions, emergency room visits and outpatient visits. Preparing enrollees for the change in payment type and frequency will be an important aspect of promoting a successful transition.

Other LIHP-HCCI enrollees will be income eligible for Medi-Cal

The ‘Bridge to Reform’ §1115 Waiver Special Terms and Conditions require the development of a transition plan to move LIHP enrollees into new options for affordable coverage. Planning for the transition of LIHP-HCCI enrollees to Covered California is likely to be more complex than the LIHP to Medi-Cal transition because of new, streamlined income determination methods required by the ACA, the availability of tax credits and cost sharing reductions, and the need to choose a private health plan. During 2012, California focused primarily on planning for the transition of LIHP-MCE enrollees to Medi-Cal due to their large number (currently over 470,000) and the limited information that was available regarding Covered California health plans and the California Healthcare Eligibility Enrollment and Retention System (CalHEERS). More detailed planning for the Covered California transition is now underway. A summary of current transition plans for the LIHP-HCCI enrollees is provided below.

Communication plans that have already been developed by the Department of Health Care Services (DHCS) and Covered California include:

To facilitate the transition to new coverage options in 2014, LIHP-HCCI data from the Medi-Cal Eligibility Data System (MEDS) will be provided to Covered California for targeted outreach to LIHP-HCCI enrollees.12 Covered California customer service representatives will assist HCCI enrollees in completing the eligibility determination process through CalHEERS. Based on the outcome, HCCI enrollees will be incorporated into transition activities for Covered California or follow steps to be enrolled in Medi-Cal. CalHEERS will also determine eligibility for subsidies and the premium tax credit amount. CalHEERS utilizes Modified Adjusted Gross Income (MAGI) guidelines to assess eligibility, a new requirement created by the ACA.

Recommendations to Promote a Smooth Transition

Recommendation 1: Collaborate with LIHPs for Communication and Outreach Activities

Covered California has the opportunity to promote enrollment by working closely with the counties serving the majority if LIHP-HCCI enrollees: Ninety-two percent of LIHP-HCCI enrollees are found within Alameda, Contra Costa, Orange, San Francisco and Ventura counties. The following strategies could be incorporated into Covered California communication and outreach in these counties:

Covered California could build on the current plans for targeted outreach to LIHP-HCCI enrollees by using the same information to pre-fill Covered California enrollment data fields. This will reduce the number of steps required to enroll in coverage and allow enrollees to focus on choosing a health plan and understanding premium tax credits. Making this information available to Service Center staff assisting with enrollment will also speed the enrollment process.

Given the concentration of HCCI participants in a small number of counties, Covered California should promote enrollment through preparing specialized assisters in the counties with HCCI enrollees. Specialized assisters could perform follow-up phone calls to gather additional information and support LIHP enrollees in enrolling in new coverage.

The policy note was made possible through the generous support of the Blue Shield of California Foundation (BSCF) and the California Department of Health Care Services (DHCS). Specifically, we thank our DHCS collaborators (Alice Mak, Brian Hansen, Frank Kwong, Theresa Giordano, Jalynne Callori, Bob Baxter, Gloria Petrul and Len Finocchio), our colleagues from the California Medicaid Research Institute (Catherine Hoffman and Andrew Bindman), and BSCF (Richard Thomason and Peter Long). We also thank Shana Lavarreda, Erin Salce and Dana Hughes for their thoughtful edits and Xiao Chen and Dimiter Milev for their support in providing enrollment data specific to this report. Special thanks to the LIHPs who provided information on their programs, the LIHP Transition Planning Workgroup participants, and the stakeholder groups who shared their experiences and insights throughout the development of the transition plan.