The Affordable Care Act (ACA) reduced uninsured rates for all racial and ethnic groups in California, while also narrowing, but not eliminating, the coverage gaps for Latino and Black Californians in this state. If the ACA is ultimately overturned due to the California v. Texas case, scheduled to be heard by the Supreme Court starting on November 10, the progress on racial and ethnic health coverage disparities would be reversed. These coverage losses and widening inequity would occur in the middle of a pandemic and recession that have disproportionately harmed communities of color. 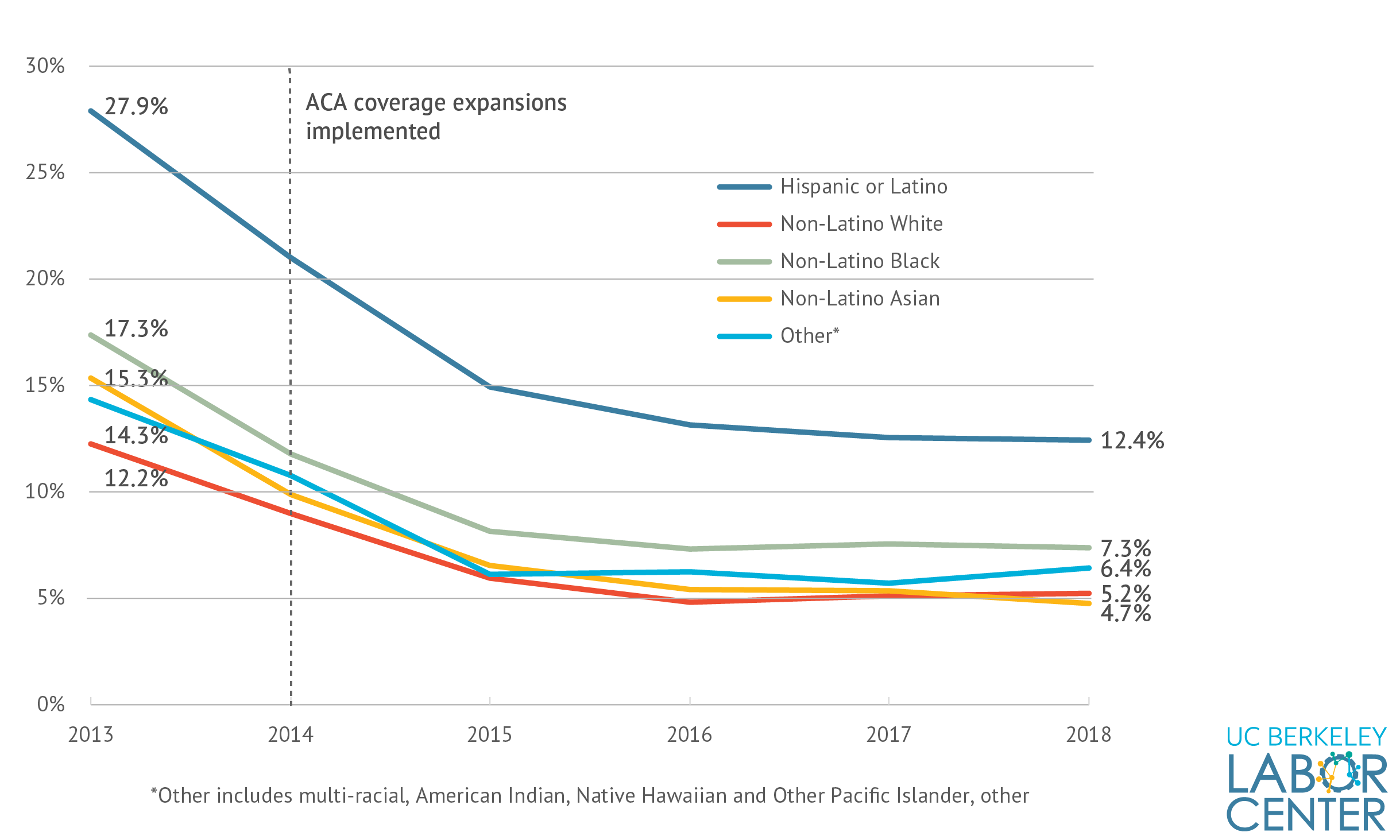 Approximately 4.7 million Californians relied on ACA coverage as of June 2018, including 3.5 million with Medi-Cal expansion coverage, and 1.2 million with insurance through Covered California with premium subsidies. Approximately one out of five Black (23%), Latino (21%), and Asian / Pacific Islander (18%) California adults under age 65 were enrolled in the Medi-Cal expansion or Covered California with subsidies in 2018, compared to 14% of non-Latino whites, based on analysis of administrative enrollment data and American Community Survey data. Latino and Black Californians are more likely to be eligible for and enrolled in ACA coverage for a variety of reasons such as lower rates of having job-based coverage, in part due to lower offer rates in the industries and occupations in which they work, and higher rates of low-wage work which makes income eligibility for ACA coverage more likely. Federal policy excluding undocumented immigrants from Medicaid and Marketplace coverage is part of the reason for the continued high uninsured rate among Latinos.

If the courts overturn the ACA during the middle of this pandemic and recession, Latino and Black Californians would not only be among the hardest hit by the loss of ACA coverage, but those coverage losses would be compounded by employment and COVID trends that are inordinately hurting these same groups. Job losses in the first half of 2020 were concentrated among Latino, Black, and Asian Californians whose unemployment rates increased more than the unemployment rate for non-Latino whites. Even as jobs begin to return to the economy, there is reason to believe that this recession and its recovery will exacerbate racial inequity. Latinos have experienced a disproportionate share of COVID infections in California, and Latino and Black Californians make up a disproportionate share of those who have died from COVID. Furthermore, if the ACA is overturned, insurers could once again deny coverage or charge higher premiums for people with pre-existing conditions, which could include COVID.