The health bill released by Senate Republicans today would be devastating to low-income Californians and their access to health coverage. While the proposed Senate bill, the Better Care Reconciliation Act, is largely similar to the American Health Care Act passed by the U.S. House in May, the lowest-income Californians would fare even worse under the Senate bill than under the House bill.

Under the House-passed bill, 14 million Americans would lose Medicaid coverage, and annual federal Medicaid spending would be cut by one-quarter by 2026, according to Congressional Budget Office (CBO) estimates. When the CBO releases its projections for the Senate bill next week, the projected Medicaid impacts may well be even worse.

The Senate bill includes drastic federal funding cuts to the Affordable Care Act (ACA) expansion of Medicaid to low-income adults. If passed, this would make it very difficult for California to continue the expansion of Medi-Cal (California’s Medicaid program) at its current level, unless the state can find $10 billion annually in new tax revenues or spending cuts by 2027, as we estimated in March. The Senate bill phases in the federal funding cuts to the expansion more slowly than would be the case under the House bill; however, the longer-term loss of Medicaid coverage due to these cuts would be the same even with a slower phase-in, as illustrated by the Center on Budget and Policy Priorities.

The Senate bill would also cap federal Medicaid spending per enrollee beginning in 2020. This would cut billions in federal funding in California over time and force state policymakers to make difficult decisions about restricting Medi-Cal eligibility, decreasing benefits, or both. The Senate bill would cap federal spending even more severely than the House-passed bill; starting in 2025, the Senate bill would cap Medicaid spending at the rate of inflation (CPI-U) rather than at the rate of medical inflation, as in the House bill. Since health costs are rising faster than inflation, more and more of the costs of Medicaid would be shifted over to the states each year—with a very large price tag to any state seeking to maintain benefits and coverage at current levels. 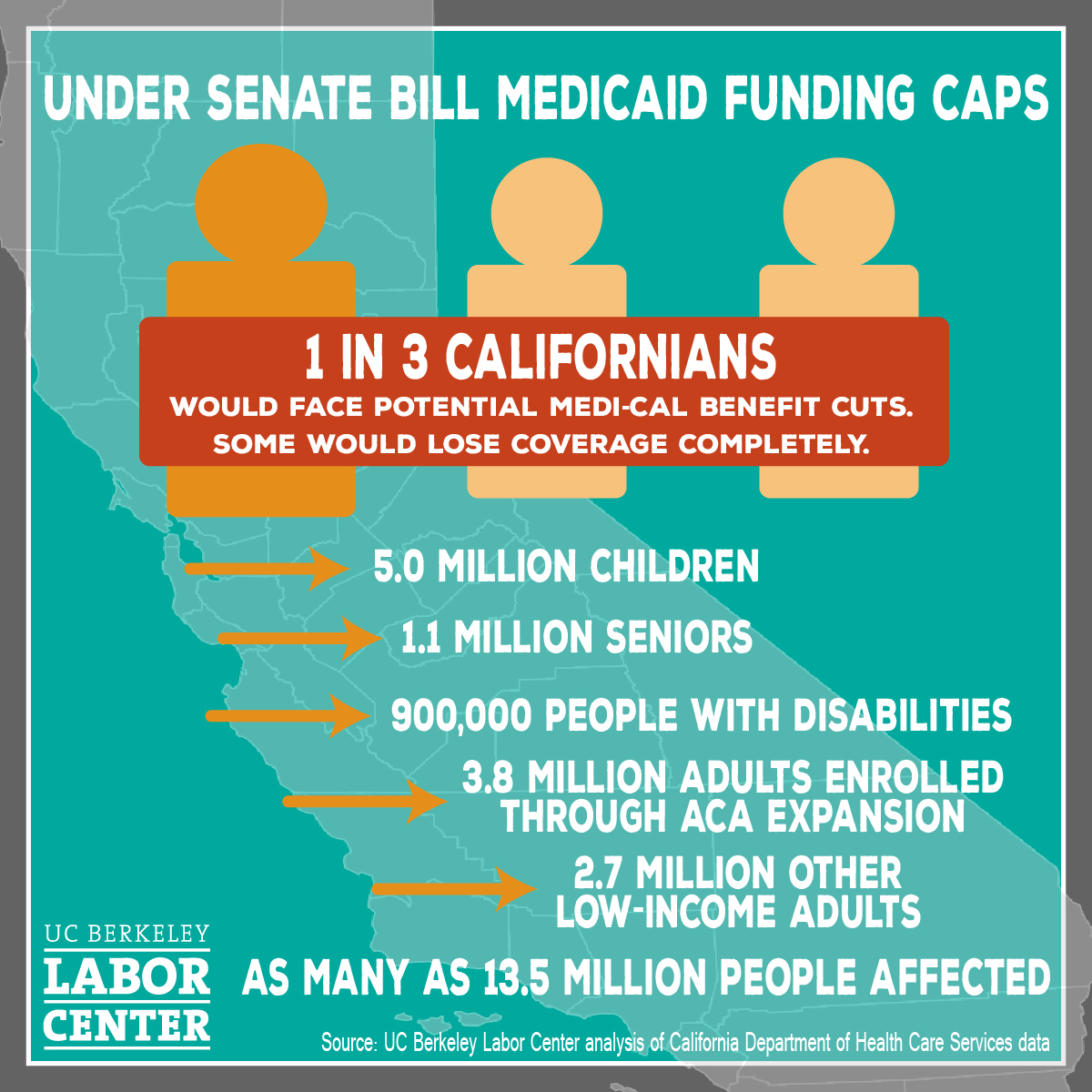 As a result, all of the state’s 13.5 million Medi-Cal enrollees are at risk of facing cuts, whether they are children, seniors, people with disabilities, or other low-income adults. Some of these Californians would lose coverage completely, while others may see benefits reduced.

Together, the Medicaid expansion cuts and caps on federal funding would end Medi-Cal as we know it.

Who are the 13.5 million Californians that potentially face Medi-Cal cuts under the Senate bill? Most Medi-Cal enrollees are in low-income households with annual income of less than $16,640 for a single individual or $33,900 for a family of four. Medi-Cal enrollees are disproportionately people of color: 78% of Medi-Cal enrollees versus 62% of the California population. In certain parts of the state, more than two out of five residents is enrolled in Medi-Cal; this includes most of the Central Valley, Los Angeles County, San Bernardino County, and many rural counties in the northern part of the state, according to analysis by the California Budget & Policy Center.

Even Californians who are not currently enrolled in Medi-Cal should be concerned about the Senate bill’s cuts to Medicaid, not only because the vast majority of Californians recognize the importance of the program to the state, but also because many people who do not rely on the program today may rely on it tomorrow as their incomes or circumstances change. For example, three out of five nursing home residents in this state are covered by Medi-Cal, and some of them only became low-income and eligible for Medi-Cal after spending their savings on long-term care.

On top of rolling back low-income Californians’ access to health insurance, the Senate bill would also enable a huge transfer of public resources from the poor to the rich. In the same bill in which the Senate slashes health care for low-income households, they also propose massive tax cuts for high-income households. It’s not only mean, it’s deeply unjust.