A Report Co-Released with the National Institute on Retirement Security

Most public school teachers are covered by traditional pensions that encourage and reward long service. In this study, we determine whether most teachers working in classrooms today can expect to work long enough in the same state to accrue higher benefits under their existing traditional pension, which provides monthly income based on age and service, than they would under a 401(k)-type savings plan of equal cost. We focus on public school teachers in six states: Colorado, Connecticut, Georgia, Kentucky, Missouri, and Texas. As a point of comparison with non-teacher public employees, we also analyze Colorado state employees who are covered by the same pension plan as teachers.
Recent studies from the Urban Institute, Bellwether Education Partners, and other organizations have questioned the adequacy and fairness of defined benefit pensions for teachers, arguing that high attrition rates among new-hire teachers lead to few teachers receiving a meaningful benefit. However, these studies are largely based on hypothetical new teacher cohorts, and are not representative of the teaching profession as a whole.

This study evaluates pensions against hypothetical 401(k) plans, taking into account the teaching workforce as a whole and comparing benefits across plan types on an apples-to-apples basis. For each of the six states in the study, we first analyzed teacher turnover patterns and projected the final tenure—years of service at retirement or separation—for the current teaching workforce, using retirement system actuarial assumptions. Then, for every possible combination of age and service at exit, we compared benefits under the existing teacher pension (using the least generous pension benefit tier, where applicable) and a hypothetical 401(k) with the same contribution rate as the pension. Crucially, our analysis was weighted to reflect the real-life teaching workforce in each state.

We find that traditional pensions are significantly better matched to the typical teacher’s career than 401(k) savings plans in the states in our study. Two out of three teachers (65%) will have worked at least 20 years by the time they leave service. A large majority (77%) of the educators currently serving in Colorado, Connecticut, Georgia, Kentucky, Missouri, and Texas can expect to collect pension benefits that are greater in value than what they could receive under an idealized 401(k)-type plan with no investment mistakes. Ultimately, switching to a 401(k)-type retirement benefit would sharply reduce the retirement income security of teachers who account for a large majority of educational labor.

1. Most classroom teaching is performed by long-career teachers who are well positioned to benefit from a traditional pension. 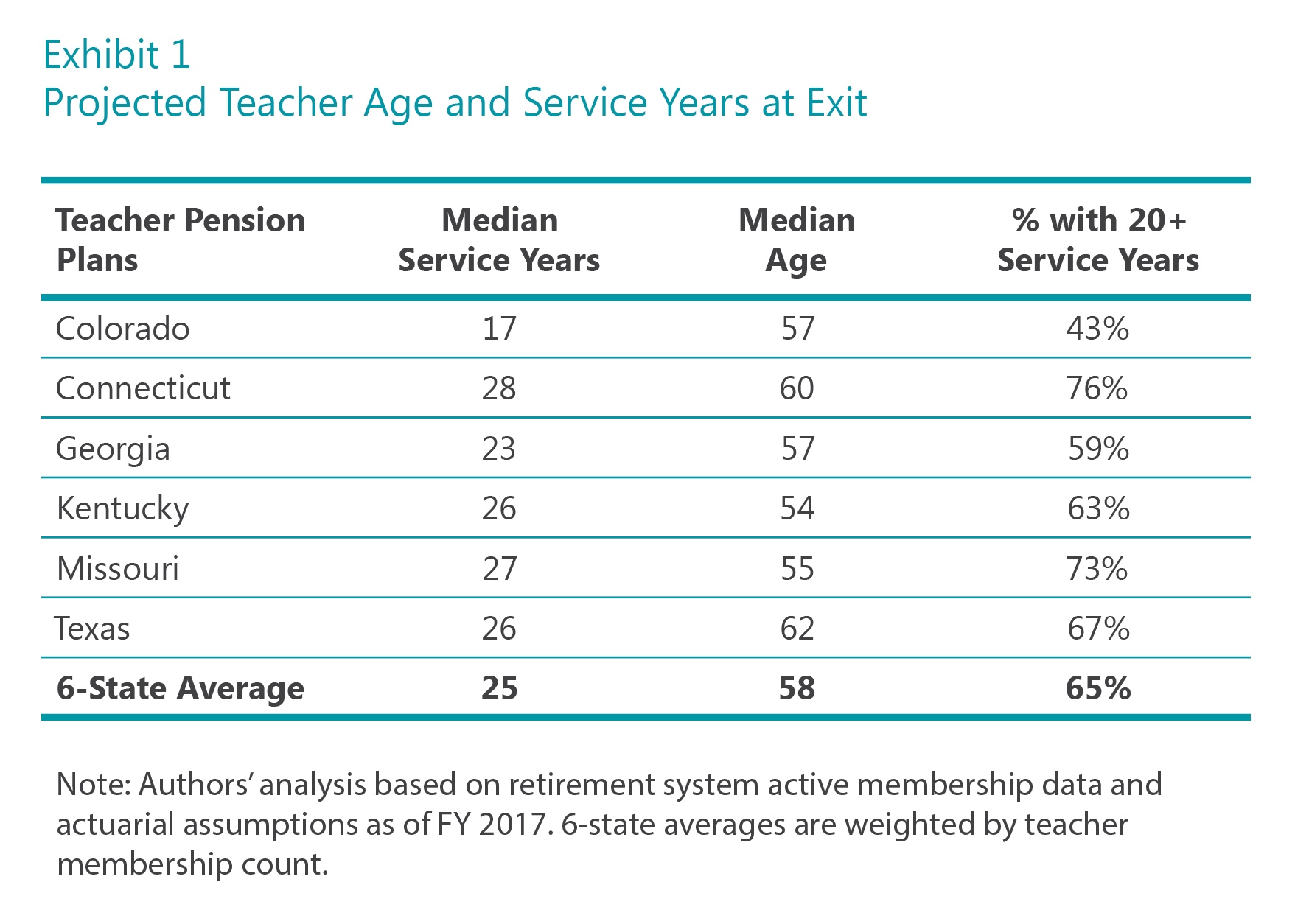 2. For eight out of ten teachers in the six states analyzed in this study, existing pensions—which have a wide variety of benefit provisions—provide greater, more secure retirement income compared to an idealized 401(k) savings plan. 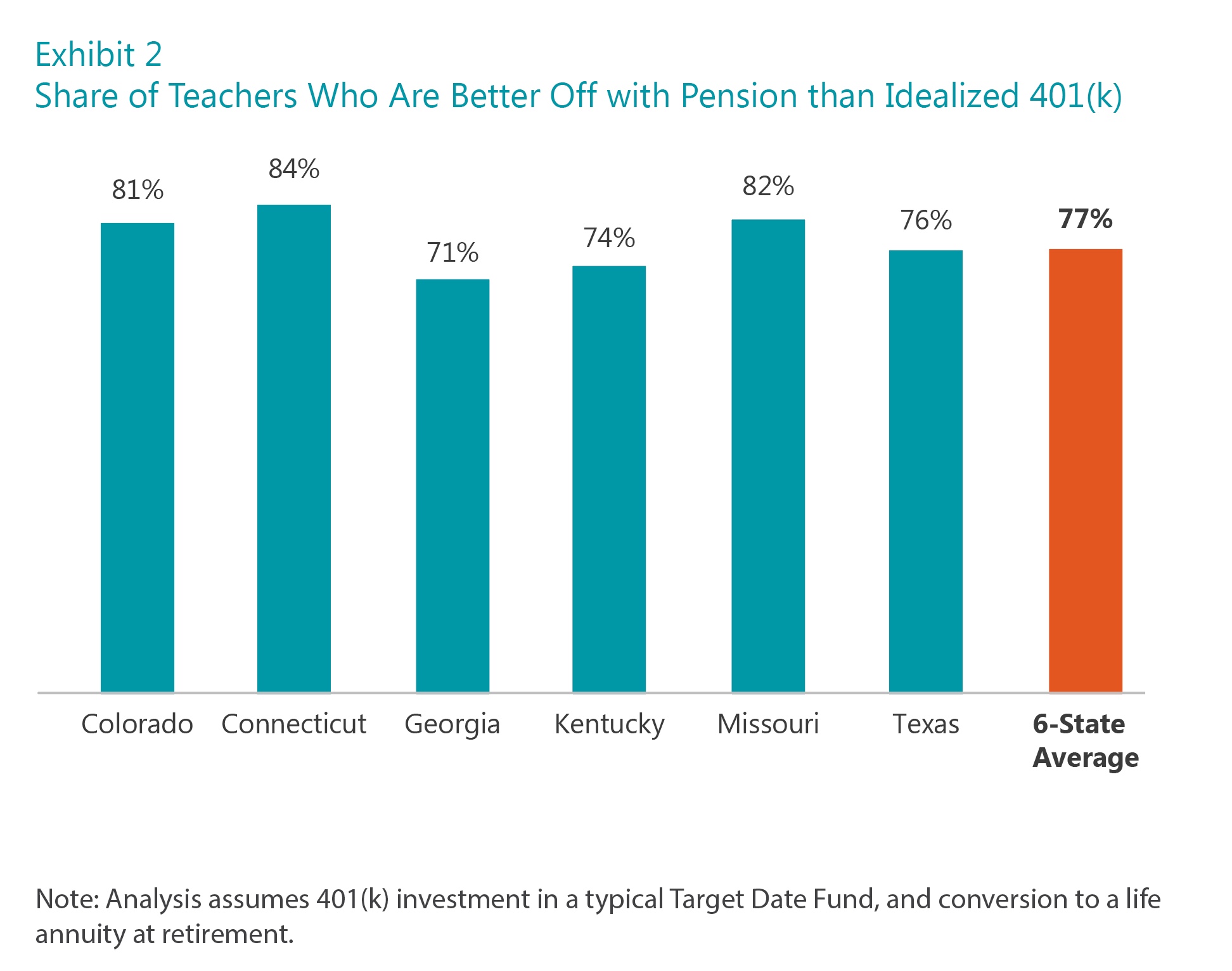 3. Conversely, only two out of ten teachers in the six states will accrue less benefit under the lowest-tier pension offered by their state, compared to an idealized 401(k)-style plan.

4. Pensions provide significantly more valuable benefits than 401(k)s for typical teachers in all six states. Thus, most teachers would require substantially higher contributions to realize the same retirement income in a 401(k) as the lowest-tier pension.

5. Comparing state employees in Colorado with teachers in Colorado and other states, we find that pensions are more valuable than 401(k)s for most employees.