HomePublicationsReportThe End of the Recession? How Blacks Might Fare in the Jobless Recovery

Recently, there have been seemingly contradictory announcements concerning the economy. In September another 95,000 jobs were shed as the unemployment rate remained at 9.6%. Unemployment has been at least 9.5% for well over a year now. About the same time it was announced that the recession, which began in December 2007, had actually ended in June of last year—thus we are several months into the second year of recovery. This brief provides some explanation and context in light of economy recovery amidst continued job losses and stubbornly high unemployment.

How could the recession be over?

The task of officially declaring the start and end dates of recessions is performed by the Business Cycle Dating Committee of the National Bureau of Economic Research. The Committee is currently comprised of seven economists (an eighth is on leave) from prominent universities. The Committee examines the data trends of several economic indicators, including measures of:

The Committee did not say that the economy had returned to its pr e-recession level of activity or that the economy was strong; it just stated that the decline in several economic measures that began in December 2007 had ended and an y new decline in economic activity would represent a new recession.[1]

That the economy is not officially in recession does not mean that it doesn’t feel as if it is for many workers and their families. There is often not a palpable difference between a recessionary economy and a weak recovery—this is especially true with jobless recoveries.

What is meant by a jobless recovery?

An economy officially in recovery that continues to shed jobs as if in recession or experiences prolonged tepid job grow is deemed a jobless recovery. In a jobless recovery it takes an inordinate amount of time to recoup the jobs lost during the downturn. While the recession officially ended in June 2009, the employment picture remains quite dismal. At its worst 8.4 million jobs were lost which represented 6.1% of all jobs—that occurred in December 2009. To date job losses are still down 7.7 million which represents 5.6% of all jobs. Since the onset of recovery, the monthly employment reports have been mixed, but on net the employment level has fallen by an additional 439,000.

Job losses due to the 1990 recession (pink line) were just about 1.5%—quite shallow comparatively and the recession was officially just eight months long. But employment lingered at the trough for a long time and it took about 31 months to recoup those lost jobs. The downturn in 2001 (green line) was also eight months long and about 2% of jobs were lost—again relatively mild—but it took 46 months to recoup those lost jobs. 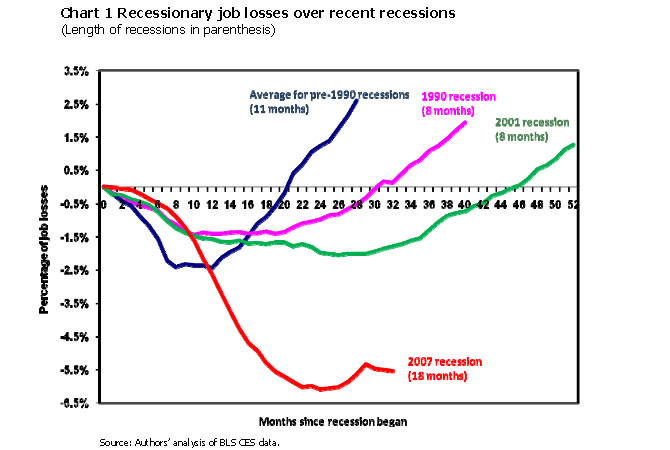 It is clear from the chart that the recession that started in December 2007 (red line) led to a reduction in employment that fa r exceeded that of the previous recessions. This recession was eighteen months long and ended in June 2009. Job losses were catastrophic. At its worst point jobs were down 8.4 million. Job growth turned positive in the spring of 2010—mostly due to the temporary hiring of Census workers. But, shortly after they were hired they were let go and job growth once again turned negative. At this point it is clear, the labor market is in the realm of a jobless recovery—a prolonged period of negative or weak job growth. It will be a very long time before this economy recoups the enormous amount of jobs lost over this recession.

While it is difficult to predict exactly what might happen to Black workers during this jobless recovery, it is instructive to examine what happened to Black unemployment during the last jobless recovery which followed the 2001 recession. Chart 2 provides key information. 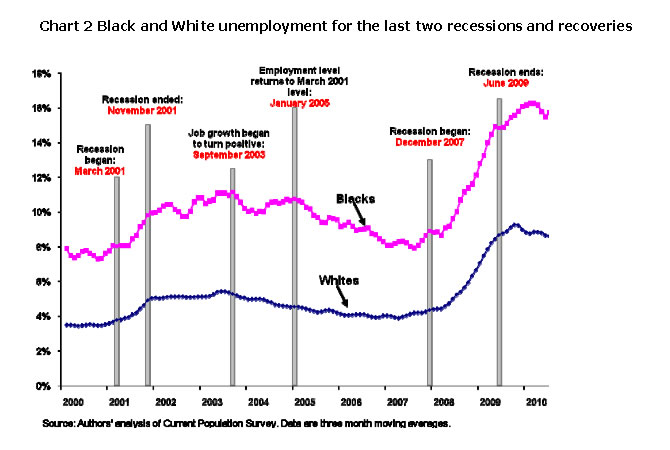 The gray bars in the chart mark key dates of the last two recessions and recoveries. In examining the trend in Black unemployment since the 2001 recession, there are six key dates:

Starting with the onset of the 2007 recession, again the Black unemployment rate increased at a faster rate than did that of whites. Since the onset of recovery—in June 2009—the unemployment rate of Blacks has increased by 1.4 percentage-points; from 14.8% to 16.2%. The rate for whites at the start of recovery was 8.7% and after an initial increase it is back to that same rate today.

If the 2001 pattern holds, it may well be that the current Black unemployment rates may not begin to significantly abate until the employment level returns to its pre-recessionary level of December 2007. This will almost certainly take several years as the shortfall in jobs is currently at 7.7 million. In order to re turn the national unemployment rate to its December 2007 rate, the economy would need to create 290,000 jobs per month for 5 years; so far this year, job creation has averaged 68,000 per month even as the last four months have averaged -98,000.