Beginning in 2018 the Affordable Care Act will implement an excise tax on “high cost” job-based health insurance—single plans with yearly premiums exceeding $10,200 and family plans with premiums exceeding $27,500. Congress is currently considering several bills, authored by Democrats and Republicans alike, that would repeal the tax. This blog post is the first in a series in which I discuss the likely consequences of the excise tax policy.

The excise tax on high cost job-based health plans is typically described as a “Cadillac tax,” but this is misleading. The premise behind the excise tax is that it will rein in overly generous job-based health plans; the evidence indicates, though, that the tax is poorly targeted because premiums depend more on where you live, the health of your co-workers, and your company’s size than on generosity of benefits. It is those factors, not plan richness, that will be more likely to determine whether the health benefits you get through your job are taxed.

Benefit Design Explains only a Small Fraction of Premium Variation

Health care premiums can vary significantly between firms and regions, even when those plans cover the same services and require the same level of enrollee cost sharing. The type of plan—HMO, PPO, or another plan type—can also be considered part of the benefit design. A study by researchers at NORC and Towers Watson found that benefit design (including plan type) accounts for only 6.1% of cost variation between job-based family coverage plans. A separate study by Milliman also found that benefit design (not including plan type) is a relatively minor contributor to premium variation, explaining 6.2% of the relative impact when considered in isolation of other factors.

Marketplace premium data show how much premiums can vary by insurer and region, even among plans with similar benefit levels. While the excise tax applies only to job-based plans, comprehensive premium data is publicly available for the Marketplaces, providing greater opportunity for analysis. If benefit levels were the primary driver of health insurance premiums, one would expect that premiums for Marketplace silver plans would be relatively similar around the county, since these plans are required to provide essential health benefits and pay for 70% of covered medical costs across a standard population, on average. To compare even more similar plans, I focus on a subset of Marketplace silver plans—HMO plans with $2,000 deductibles—and find that monthly premiums for a 50-year old vary widely by insurer and region from $232 to $775. This range likely reflects a variety of factors, only some of which are under the control of insurers, but this examination of similar Marketplace silver plans indicates that benefit levels do not explain much of the premium variation. 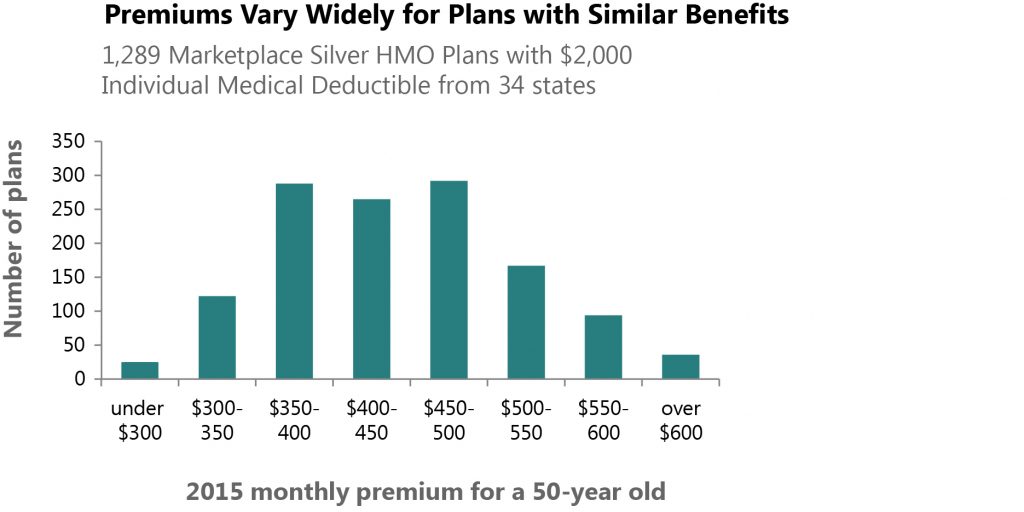 Some portion of the variation in premiums may be attributable to narrow provider networks, which are associated with premiums that are 15% to 23% lower among Marketplace plans. Narrow network plans are especially prevalent in the Marketplaces, but are less common among job-based plans. Some plans’ ability to further tighten their networks may be limited due to provider capacity (in rural areas, for example) or provider negotiating strategies (for example, Sutter Health, a California health system, reportedly sometimes requires an insurer to contract with all of its hospitals or none of them). In some cases, the potential premium variation due to network breadth or narrowness is likely to be outweighed by other factors, like geography.

Geography, Risk Mix, and Other Factors Linked to Premium Variation

The following factors have the potential to significantly affect premiums, but employers and workers have limited, if any, control over them.

Geography: The excise tax provisions do not account for geography-related cost variation, but a study by Milliman found that job-based premiums can vary greatly due to geographic cost differences and area-specific levels of provider discounts, which are often reflective of market consolidation and the breadth or narrowness of a provider network. The combined effect of geography and provider discount levels can increase the premiums for a typical gold-level plan by as much as 77% above the national average in San Francisco, 65% in Anchorage, or 49% in Atlantic City, all other factors held equal. These regional differences can push the plan values thousands of dollars over the excise tax high-cost threshold, while the national-average gold plan would not be subject to the tax. As described by Milliman, this can work in both directions: “There are many areas of the country where the combined effect of premium-driving factors will make it unlikely that the threshold could be exceeded, no matter how rich the benefit plan.”

Risk Mix: Another factor affecting premium variation is the health of one’s co-workers. For large employers purchasing health insurance, premiums are generally based on the risk mix and past claims experience of their workforce. This differs from the modified community rating rules in the individual and small employer insurance markets, which require that only age, geographic region, and tobacco use can be used to determine premiums. While the excise tax includes an adjustment for the age and gender of a particular workforce, factors which both contribute to risk mix, the details of this adjustment have not yet been established in federal regulations and the excise tax provisions do not account for other risk mix factors like prevalence of chronic conditions. Health plans covering sicker workers could therefore be more likely to be subject to the tax.

Business size: Additionally, small businesses tend to pay more for premiums than larger businesses even though their benefits are less comprehensive, on average. One study found that premiums for the smallest firms were 18% higher than similar plans purchased by very large firms.

These are just some of the characteristics of health plans that could make them more susceptible to the excise tax. Rather than target the most generous plans, the excise tax runs the risk of unfairly penalizing workers based on factors like where they live, how much competition exists in their local health care market, the health of their co-workers, and their company’s size.

View the second post in this blog series:
The ACA Excise Tax will Promote Cost Shift to Workers not Cost-Effectiveness

View the third post in this blog series:
The ACA Excise Tax is not a Progressive Tax Policy