Even as the economy has at last begun to expand at a more rapid pace, growth in wages and benefits for most American workers has continued its decades-long stagnation. Real hourly wages of the median American worker were just 5 percent higher in 2013 than they were in 1979, while the wages of the bottom decile of earners were 5 percent lower in 2013 than in 1979.[1] Trends since the early 2000s are even more pronounced. Inflation-adjusted wage growth from 2003 to 2013 was either flat or negative for the entire bottom 70 percent of the wage distribution.[2] Compounding the problem of stagnating wages is the decline in employerprovided health insurance, with the share of non-elderly Americans receiving insurance from an employer falling from 67 percent in 2003 to 58.4 percent in 2013.[3]

Stagnating wages and decreased benefits are a problem not only for low-wage workers who increasingly cannot make ends meet, but also for the federal government as well as the 50 state governments that finance the public assistance programs many of these workers and their families turn to. Nearly three-quarters (73 percent) of enrollees in America’s major public support programs are members of working families;[4] the taxpayers bear a significant portion of the hidden costs of low-wage work in America.

This is the first report to examine the cost to the 50 states of public assistance programs for working families. We examine working families’ utilization of the health care programs Medicaid and Children’s Health Insurance Program (CHIP), as well as their enrollment in the basic household income assistance program Temporary Aid to Needy Families (TANF). Both of these programs operate with shared funding from the federal government and the states, and in this report we also examine the costs to the federal government of Medicaid/CHIP and TANF, as well as the Earned Income Tax Credit (EITC) and the food stamps program (Supplemental Nutrition Assistance Program, or SNAP). Our analysis includes only the cash assistance portion of TANF, and it does not include costs for state Earned Income Tax Credits, child care assistance, or other state-funded means-tested programs. Overall, we find that between 2009 and 2011 the federal government spent $127.8 billion per year on these four programs for working families and the states collectively spent $25 billion per year on Medicaid/CHIP and TANF for working families for a total of $152.8 billion per year. In all, more than half—56 percent—of combined state and federal spending on public assistance goes to working families.

We define working families as those that have at least one family member who works 27 or more weeks per year and 10 or more hours per week. To calculate the cost to the federal and state governments of public assistance programs for working families, we mainly rely on two sources of data: the March Supplement of the U.S. Bureau of Labor Statistics’ Current Population Survey (CPS) from 2010–2012 and administrative data from the Medicaid, CHIP, TANF, EITC, and SNAP programs for FY 2009–10. All amounts are adjusted to and reported in 2013 dollars. Medicaid figures exclude aged, blind, and disabled enrollees. Our calculation method is described in the appendix.

It is important to note that there have been significant changes in Medicaid enrollment since implementation of the Affordable Care Act (ACA), but these change are not reflected in this analysis because the data is not yet available. A key provision of the ACA, adopted by 28 states and Washington D.C., expanded Medicaid coverage starting in 2014[5] to low-income adults under age 65 including those without children living at home, with the federal government paying 100 percent of the cost through 2016. In addition, enrollment in “traditional” Medicaid—that is, among those who had been previously eligible—has also been boosted, in both expansion and nonexpansion states, due to the individual mandate to obtain health insurance, as well as increased outreach, awareness, and system improvements to Medicaid related to the ACA, particularly since the opening of the health care exchanges in October 2013.[6] These costs will be shared by the federal government and the states as determined under traditional Medicaid formulas.

Table 1 shows the total enrollment as well as working families enrollment in the four major public assistance programs between 2009 and 2011. Among Medicaid/CHIP recipients, 34.1 million were workers and their dependents; this comprises well over half (61 percent) of the program’s overall enrollment. TANF, the smallest program, had 2.3 million recipients who were workers and their dependents, comprising almost one-third (32 percent) of all program enrollees. The 20.6 million working families receiving the Earned Income Tax Credit made up three-quarters (74 percent) of total EITC recipients. The SNAP program had 10.3 million working families receiving assistance, comprising 36 percent of the total program enrollment. There is significant overlap in enrollment in these programs, and we are not able to determine with this data the total number of enrollees in these four programs combined.

As shown in Table 3, per year the states collectively spent $43.9 billion on the health programs Medicaid and CHIP. Out of this, $23.8 billion—54 percent—was used to fund these health programs for members of working families. Looking at TANF, $1.2 billion (27 percent) of the $4.6 billion cash assistance provided by the states went to working families.

Table 4 (page 6) provides a state-by-state break out of the program enrollment numbers for Medicaid/ CHIP, EITC, and SNAP. TANF data are not listed due to sample size constraints.

Table 5 (page 7) breaks out the data in Table 2, showing the annual federal cost for the four public assistance programs by state. (Note that the numbers in Table 2 are presented in billions of dollars, while the numbers in Table 5 are presented in millions of dollars.) States with the highest percentage of their federal public assistance dollars going to working families include Alabama, Colorado, Hawaii, Idaho, Iowa, Nebraska, New Hampshire, North Dakota, Oklahoma, Texas, and Utah.

Finally, Table 6 (page 8) breaks out the data in Table 3, showing each state’s annual expenditures on Medicaid/ CHIP and TANF for working families (2013 dollars). Here we see the cost of low-wage work borne by each individual state.

This report does not include all of the public assistance programs supported by federal and state dollars, because the data available on these other programs does not allow for the type of analysis we utilized. The largest programs not examined are those that provide funding for child care subsidies to low-income families. In 2013, total child care funding included: $1.1 billion in federal TANF funds spent directly on child care $2.5 billion in additional state TANF Maintenance of Effort (MOE) $7.7 billion in state and federal Child Care and Development Block Grant (CCDBG) funds[11] Child care funding is overwhelmingly expended on working families. A 2014 Urban Institute study found that at least 83 percent of families receiving child care subsidies have a member of the family that works.[12] Only a fraction of those eligible for child care subsidies currently receive them. According to a U.S. Department of Health and Human Service analysis of 2011 data,13 among children eligible under federal rules only 17 percent received subsidized care, and among children eligible under state rules just 29 percent received subsidized care. Increasing wages would allow for a broader distribution of the available funding across families in need of assistance.

When jobs don’t pay enough, workers turn to public assistance in order to meet their basic needs. These programs provide vital support to millions of working families whose employers pay less than a liveable wage. At both the state and federal levels, more than half of total spending on the public assistance programs analyzed in this report—Medicaid/CHIP, TANF, EITC, and food stamps—goes to working families.

Higher wages and increases in employer-provided health insurance would result in significant Medicaid savings that states and the federal government could apply to other programs and priorities.14 In the case of TANF—a block grant that includes maintenance of effort (MOE) provisions that require specified state spending—higher wages would allow states to reduce the portion of the program going to cash assistance while increasing the funding for other services such as child care, job training, and transportation assistance. Higher wages would also significantly reduce federal expenditures on the EITC and SNAP.15 Overall, higher wages and employer provided health care would lower both state and federal public assistance costs, and allow all levels of government to better target how their tax dollars are used. 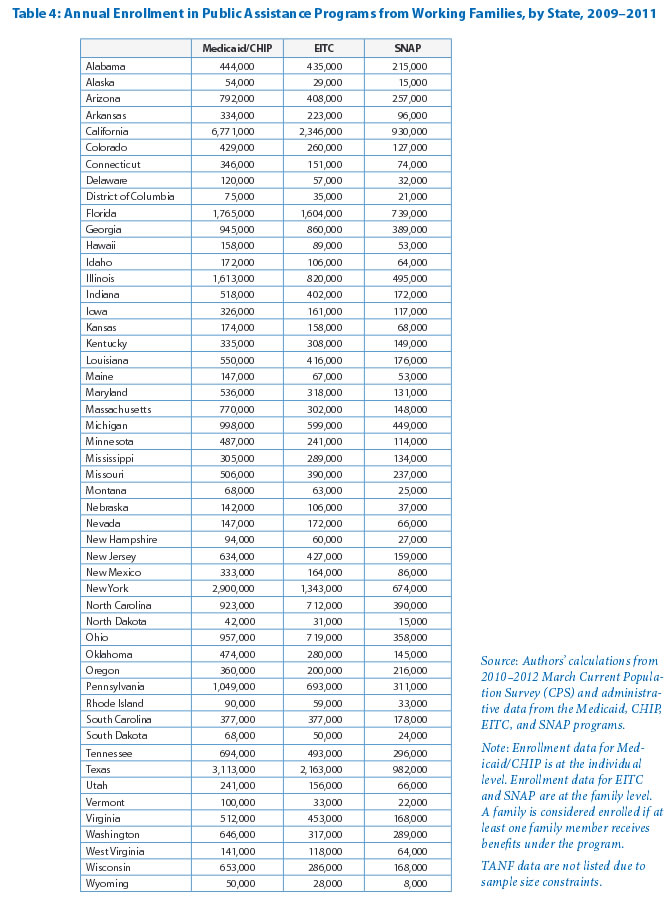 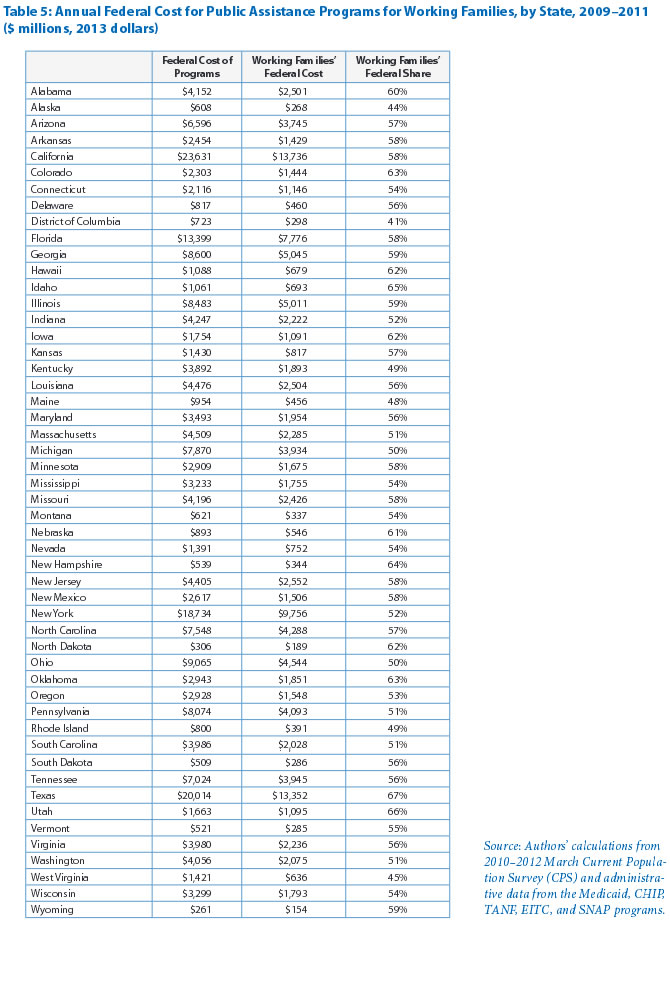 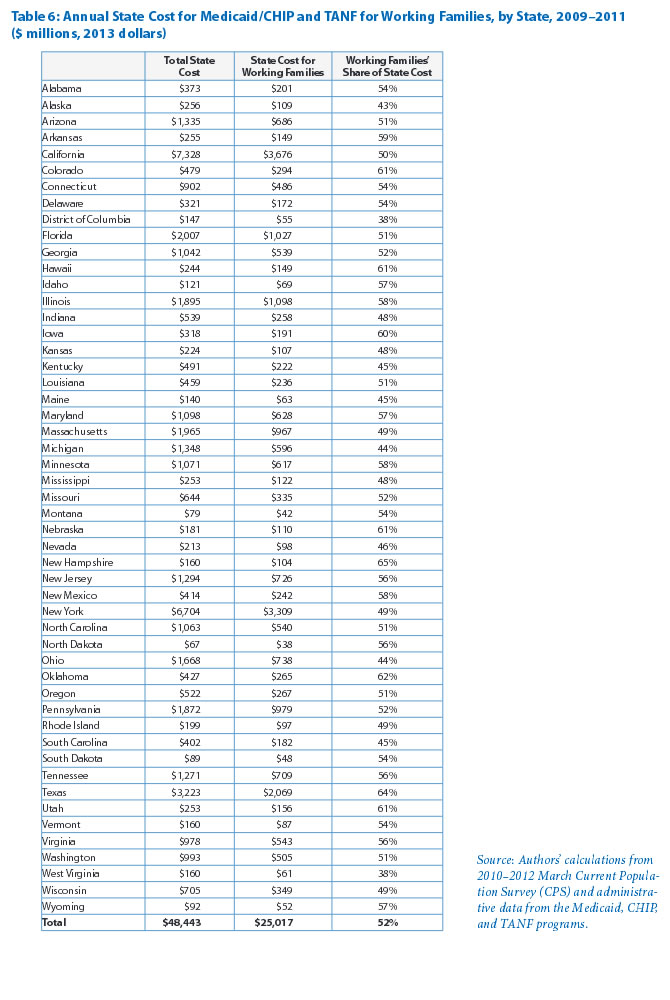 To calculate the cost to state governments of public assistance programs for working families (defined as having at least one family member who works 27 or more weeks per year and 10 or more hours per week), we mainly rely on two sources of data: the March Supplement of the U.S. Bureau of Labor Statistics’ Current Population Survey (CPS) and administrative data from the Medicaid, CHIP, TANF, EITC, and food stamp programs. Medicaid figures exclude aged, blind, and disabled enrollees. The March Supplement, also known as the Annual Demographic Supplement, asks respondents about receipts of cash and non-cash transfer payments during the past year and includes questions about the programs we examined in this analysis.

To create the cost and enrollment estimates for Medicaid, CHIP, and TANF we use the CPS to calculate the share of program expenditures and the share of individual program enrollees who live in working families. We then apply those shares to the state-by-state individual enrollment and program cost totals provided in the administrative data to obtain the number of enrollees and total expenditure on enrollees from working families. For Medicaid and CHIP, we calculate each state government’s share of expenditures by applying the state’s Federal Medical Assistance Percentage (FMAP). The TANF administrative data break out each state’s TANF expenditures.

To create the cost and enrollment estimates for EITC and SNAP, we reweight the CPS so that its cost and enrollment totals match the administrative data. We then sum the number of enrolled families (defined as having at least one family member participating in a program) and the cost of their benefits to obtain the total program enrollment and cost. We then repeat this process using only working families (defined as above) to obtain our total enrollment and cost for working families. For further detail see the earlier report Fast Food, Poverty Wages: The Public Cost of Low-Wage Jobs in the Fast-Food Industry.[13]

[6] The New York Times reported in August 2014 that there were nearly one million traditional Medicaid/CHIP enrollees in nonexpansion states that year. Margot Sanger-Katz (August 11, 2014). Medicaid Rolls Are Growing Even in States That Rejected Federal Funds. New York Times. www.nytimes.com/2014/08/12/upshot/medicaid-rolls-are-growing-even-in-states-that-rejected-federal-funds.html

[12] Note that this analysis used 2011 data and excluded child care assistance that is paid for directly by TANF without being transferred to CCDF. Gina Adams, Caroline Heller, Shaune Spaulding, and Teresa Derrick-Mills (October 2014). Child Care Assistance for Parents in Education and Training. Urban Institute. www.urban.org/UploadedPDF/413254-Child-Care-Assistance-for-Parents-in-Education-and-Training.pdf. Data is not available on the number of hours worked; as a result, not all of these families will meet the definition of working families in this report.

[14] Rachel West and Michael Reich (October 2014). A Win-Win for Working Families and State Budgets. Center for American Progress and University of California, Berkeley, Institute for Research on Labor and Employment. www.irle.berkeley.edu/research/minimumwage/min-wage-medicaid-report.pdf

[15] Rachel West and Michael Reich (March 2014). The Effects of Minimum Wages on SNAP Enrollments and Expenditures. Center for American Progress and University of California, Berkeley, Institute for Research on Labor and Employment. www.irle.berkeley.edu/research/minimumwage/effects-of-minimum-wages-on-snap.pdf