President Obama’s health reform proposal released on February 22, 2010, would expand access to coverage and make health care more affordable for low- and middle-income Californians purchasing coverage through a health insurance exchange. In this brief we estimate the number of Californians who would potentially benefit from the coverage expansion. We also estimate how much an average Californian without an employer plan would spend on premiums and out-of- pocket costs under the proposal compared to what they would spend if they purchased coverage in the existing California individual market.

As in the Senate bill, the President’s proposal would expand Medicaid to adults and children in families with incomes up to 133 percent of the Federal Poverty Level (FPL). It would also provide premium and cost sharing subsidies to individuals in families with incomes below 400 percent FPL who do not qualify for Medicaid and do not have affordable coverage through an employer. The subsidies would be applied to plans purchased in a health insurance exchange, a marketplace that would offer a choice of plans that meet standards for coverage and that would provide information to consumers to help them make educated choices about the policies they are purchasing.

Individuals who do not qualify for subsidies in the exchange would still benefit from the insurance market reforms that require insurers to cover all applicants and do not allow for differential costs based on pre-existing conditions. The majority of those who would fit this category are individuals in families with incomes over 400 percent FPL. Families with incomes under 400 percent FPL might not qualify for subsidies if they are young enough and their income is high enough that subsidies are not needed for them to be able to afford to purchase health coverage within the specified income thresholds.

We find that more than 1.7 million Californians who were uninsured, in the individual market or had unaffordable employer sponsored insurance in 2007 would qualify for Medicaid under the President’s proposal. An additional 2.2 million would be eligible for subsidies in the exchange and 1.9 million would be eligible to purchase coverage in the exchange without subsidies (Table 1).

California has an estimated 1.2 million uninsured undocumented immigrants (18.9 percent of all uninsured) who would not be eligible to purchase subsidized or unsubsidized coverage in the exchange, based on the eligibility standards in the Senate bill which the President’s proposal does not address.[1]

Expected Spending for Californians without an Affordable Employer Plan

Proposed subsidies would make health care more affordable for an estimated 2.2 million Californians by capping enrollee premium contributions at a set percentage of income and reducing out-of-pocket spending for low- and middle-income individuals who purchase coverage in the exchange. Our analysis uses simulated average out-of-pocket spending data for California employer- sponsored plans, data we describe in more detail in the Methodology section at the end of the brief. We find that Californians with average health care use and subsidized single coverage in the exchange would spend $904 to $5,159, or 15 to 88 percent, less per year under the proposal than they would on premiums and out-of-pocket costs in the current individual market. 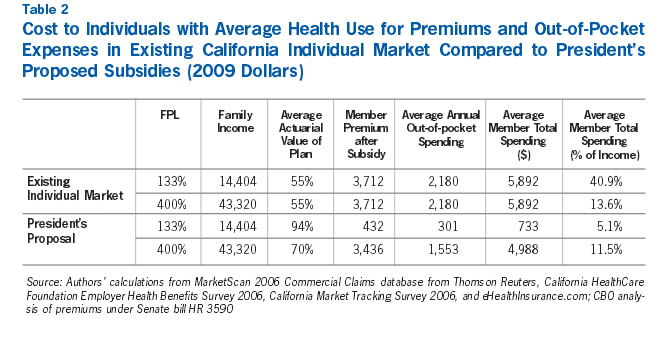 The graph below also shows how much less average Californians would spend as a percentage of income under the President’s proposal compared to what they would spend if they purchased coverage in the existing California individual market. It shows that, for single individuals with incomes below $34,000, savings are substantial—as much as 36 percent of income. At higher income levels, savings are approximately 2 percent of income. 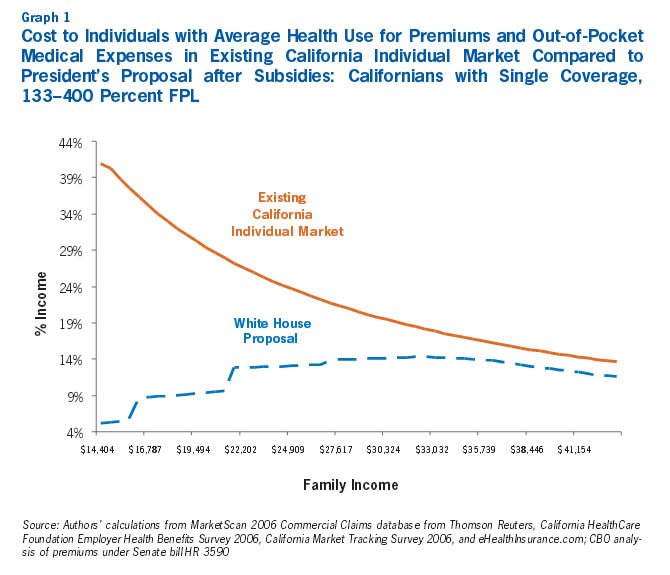 The President’s health reform proposal would provide a direct benefit to a significant number of Californians. We estimate that close to 4 million people who are either uninsured, in the individual market, or currently have unaffordable job-based coverage would be eligible for Medicaid or for subsidies in the new exchange. The subsidies in the President’s proposal would enable low- and middle-income Californians without employer coverage to pay significantly lower premium and out-of-pocket costs than they would currently pay in the individual market. While the majority of non-elderly Californians would continue to have employer-based coverage, they too would have the security of knowing that if they lost their job, or became too ill to work, affordable coverage would still be available.

Results reported in Table 1 were calculated using the public use file of the 2007 California Health Interview Survey (CHIS) augmented with the data sources described in the next two paragraphs.

While the public use CHIS records individuals as citizen or non-citizens, for confidentiality, it does not show whether non-citizens hold a green card. Green card status for uninsured adults was estimated using Exhibit 2 in a recent report (Lavarreda, Brown 2009) [3] which uses confidential CHIS data on immigration documentation status. In addition, the CHIS identifies non-citizen children who were uninsured due to immigration status or who were below 250 percent FPL and ineligible for Healthy Families. We assumed all children who met these criteria did not hold a green card.

To determine the fraction of workers offered affordable job-based coverage we first calculated the distributions of single and family employee contributions from the 2007 California Employer Health Benefit survey. Next, we determined the thresholds which would make employee contributions “affordable” or “unaffordable” from family income. In this analysis, unaffordable employer- sponsored insurance is defined as plans costing employees more than 9.8 percent of family income for contributions for insurance. These calculations are based on the language in the Senate bill. The President’s proposal did not specify whether the affordability standard would change. The distribution of employee contributions was then used to calculate the likelihood that a worker and his or her family members were required to take up insurance or allowed to opt out of job-based coverage.

Expected Spending for Californians Without an Affordable Employer Plan

In Table 2 and Graph 1, annual premium contributions for subsidy-eligible families were estimated by multiplying each family’s income by the premium percentage limits for the appropriate 2009 Federal Poverty Level (FPL). The premium caps were calculated in a sliding scale, linear manner using the maximum percentage of income proposed by the President for each income level. This analysis applies the 2013 percentage limits to 2009 income levels. We compare the maximum contribution toward the premium and the estimated unsubsidized premium the average Californian would pay under the proposal, based on the Congressional Budget Office’s estimate (11/30/09) of the national second lowest-cost Senate Silver Plan 2016 premiums, deflated to 2009 dollars by 6.1 percent annually. If the monthly premium was less than the maximum premium contribution, the estimated monthly premium cost to the family was set equal to the premium without subsidy.

The average out-of-pocket spending amounts were estimated using data published in a January 2010 report “Financial Protection of Employer-based Insurance in California, 2009,” released jointly by the UC Berkeley Center for Labor Research and Education (UCB CLRE), National Opinion Research Center (NORC) at the University of Chicago and Towers Watson. This data was based on simulation of claims payment for a standard population based on a sample of 20,000 persons enrolled in large employer plans in the 2006 MarketScan Commercial Claims database from Thomson Reuters. Using data from the California HealthCare Foundation (CHCF) Employer Health Benefits Survey, Towers Watson calculated the out-of-pocket expenses th at each person in the medical claims sample would pay if they were covered by each plan in the Employer Health Benefits Survey. Towers Watson also calculated the portion of the bill paid by the health plan. Average out-of-pocket expenses were calculated for each health plan. The level of medical expense for this population was adjusted to 2009 levels of spending for Californians enrolled in employer-sponsored insurance.

[2] Commonwealth Fund, “Issue Brief: Failure to Protect: Why the Individual Insurance Market Is Not a Viable Option for Most U.S. Families,” July 2009.