HomePublicationsReportThe Public Cost of a Low Minimum Wage in Georgia

This data brief estimates the public cost to Georgia and the federal government from the use of safety net programs by low-wage working families who would be directly affected by an increase in the minimum wage to $15 an hour by 2025. We find that just over half of these Georgia families (51%) are enrolled in at least one safety net program, at an annual cost of $4.7 billion.

In addition to improving the lives of Georgia minimum wage workers and their families, passage of the Raise the Wage Act would reduce the burden placed on federal and Georgia-funded public safety net programs, which working families turn to when their employers do not pay them enough to meet their basic needs.[2]

This analysis focuses on the families of year-round workers who would receive a direct pay increase as a result of the Raise the Wage Act. “Affected working family” is defined as a family where at least one member worked year-round (at least 45 weeks during the year) for at least 10 hours a week and earned less than $13.49 per hour (in 2019 dollars). This wage is equivalent to $15 in 2025 dollars. We exclude from the analysis those who work only part of the year, as well as those who would receive indirect pay increases due to wage-push caused by the higher minimum wage.[3]

All amounts are adjusted to and reported as annual averages in 2019 dollars. Medicaid figures exclude aged, blind, and disabled enrollees. Our calculation method is described in the Appendix. The analysis reflects pre-COVID labor market conditions. 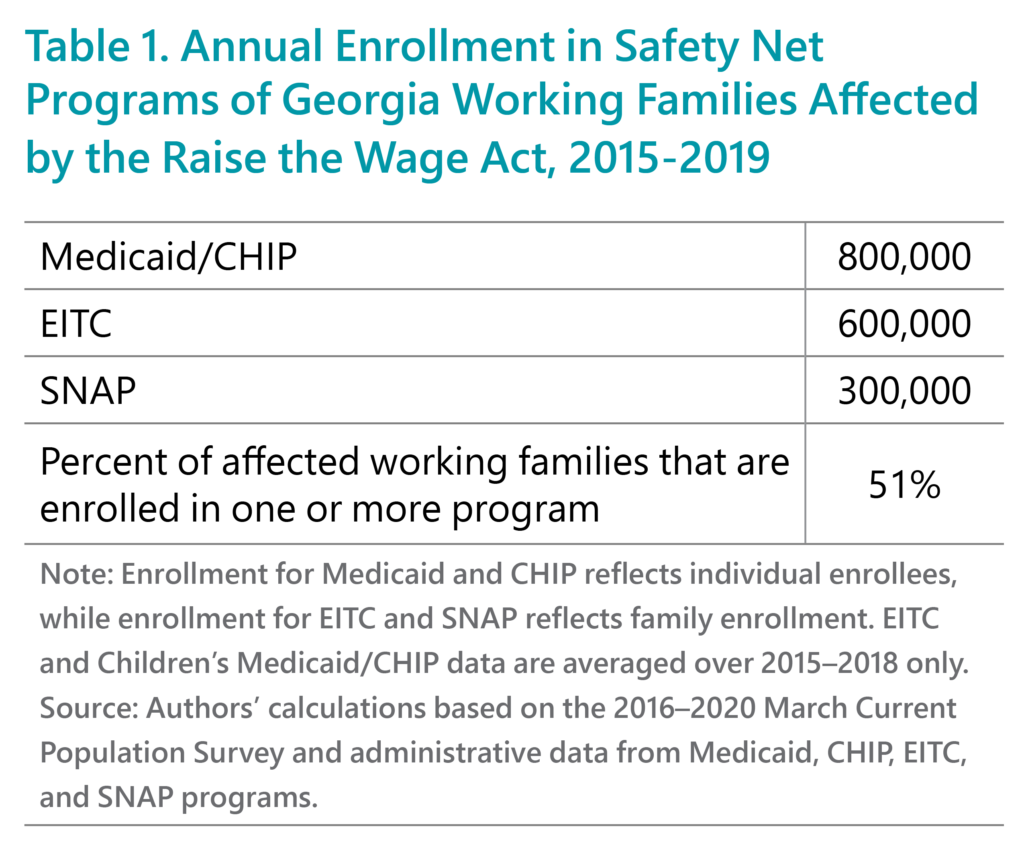 More than half (51%) of affected working families are enrolled in one or more safety net program in Georgia. 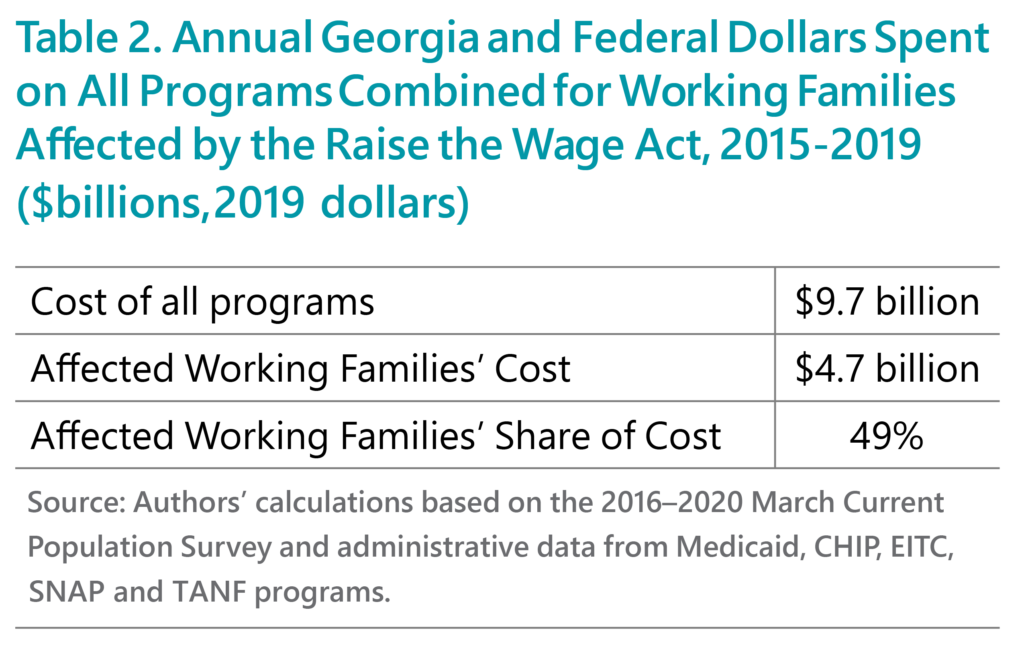 America’s public safety net programs provide a lifeline to families that need help to meet their basic needs. When firms pay workers too little to make ends meet on their own, they rely on these programs to help make up the difference. Passage of the Raise the Wage Act would move these working families in the direction of self-sufficiency and reduce their utilization of safety net programs. A $15 federal minimum wage would release some of the pressure on the safety net caused by low-wage industries, and allow state and federal dollars in Georgia to be more effectively targeted.

To calculate the cost to the federal government and Georgia of public safety net programs for low-wage working families (defined as having at least one family member who works 45 or more weeks per year and 10 or more hours per week, and earns less than $13.49 per hour in 2019 dollars), we mainly rely on two sources of data: the March Supplement of the U.S. Bureau of Labor Statistics’ Current Population Survey (CPS), and administrative data from the Medicaid, CHIP, TANF, EITC, and SNAP programs. Medicaid figures exclude aged, blind, and disabled enrollees. The March Supplement, also known as the Annual Social and Economic Supplement, asks respondents about receipts of cash and non-cash transfer payments during the past year and includes questions about the programs we examined in this analysis.

To create the enrollment estimates for each program and the cost estimates for EITC, TANF, SNAP, and CHIP, we re-weight the CPS so that its cost and enrollment totals match the administrative data. To create the Medicaid (for both adults and children) cost estimates we use the state-level per enrollee spending figures published by the Centers for Medicare and Medicaid Services (CMS) multiplied by the enrollment totals from the administrative data. We then sum the number of enrolled families (defined as having at least one family member participating in a program) and the cost of their benefits to obtain the total program enrollment and cost. We then repeat this process using only low-wage working families (defined as above) to obtain our total enrollment and cost for working families. For further detail see the earlier report Fast Food, Poverty Wages: The Public Cost of Low-Wage Jobs in the Fast-Food Industry.[4]

[2] Michael Reich and Rachel West, “The Effects of Minimum Wages on Food Stamp Enrollment and Expenditures,” Industrial Relations: A Journal of Economy and Society 54, no. 4 (2015): 668–94, https://doi.org/10.1111/irel.12110; Rachel West and Michael Reich, “A Win-Win for Working Families and State Budgets” (Center for American Progress; UC Berkeley Institute for Research on Labor and Employment, October 1, 2014), https://irle.berkeley.edu/a-win-win-for-working-families-and-state-budgets/.