Even after the American Rescue Plan (ARP) substantially increases premium subsidies for health insurance coverage purchased through Covered California, large inequities remain in who has access to affordable coverage. 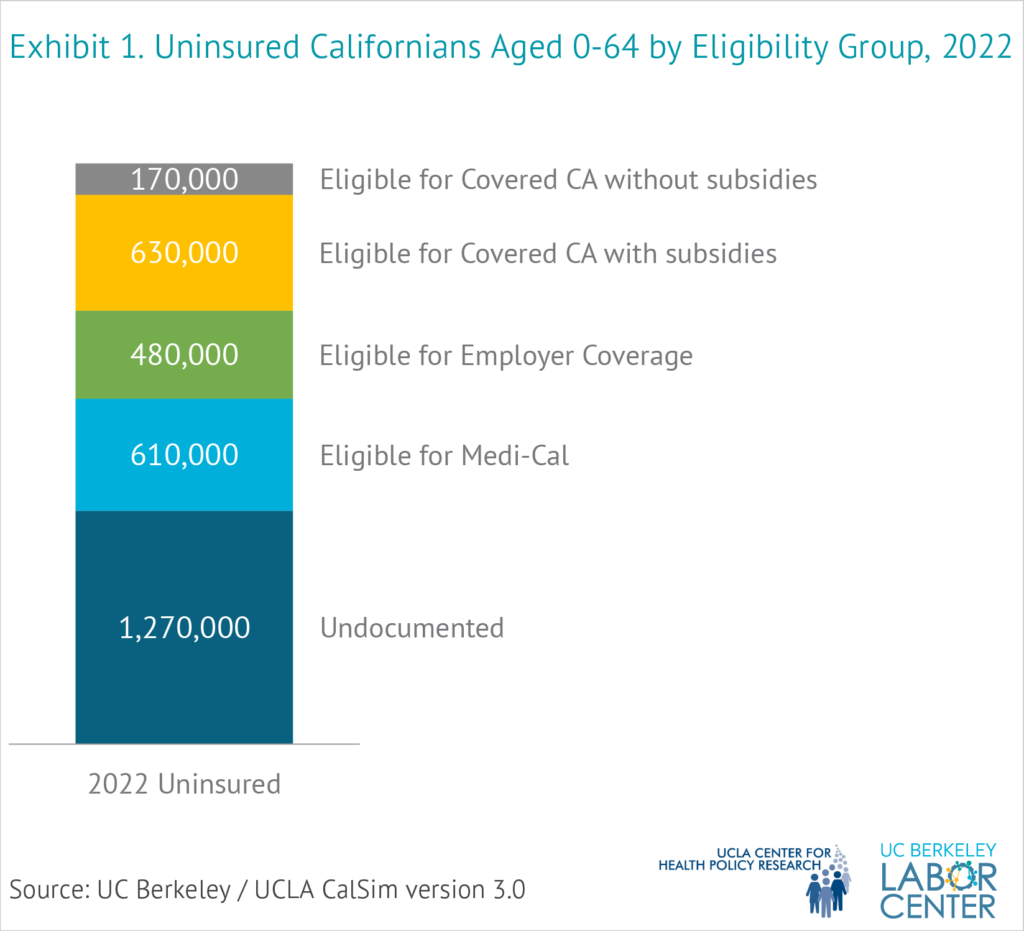 Nearly 3.2 million Californians will remain uninsured in 2022, or about 9.5% of the population age 0-64, according to our projections. The highest uninsured rates will be among undocumented Californians (65%) and those eligible only for insurance through Covered California (28%). These projections, using the California Simulation of Insurance Markets (CalSIM) model, take into account the projected economy in 2022 as the state recovers from the pandemic and recession and the associated impacts on coverage eligibility.

Undocumented residents are excluded from federal ACA subsidy and Medicaid eligibility as well as the additional help available through the ARP. Additionally, non-citizens without a green card have much lower rates of job-based coverage than their citizen counterparts because they are more likely to work in industries and occupations that do not offer health insurance. (In California, low-income undocumented children and young adults are eligible for Medi-Cal under state policy, and those who have not enrolled are included in the Medi-Cal eligible uninsured group.)

The other eligibility group with a particularly high uninsured rate (28%) are the 800,000 Californians who are not eligible for Medi-Cal or employer-sponsored insurance but are eligible to purchase coverage through Covered California. While the ARP significantly improves premium affordability, some Californians will still be unable to afford the premiums with the additional subsidies, while others may not know they are eligible for financial assistance. In addition, ARP does not directly address the longstanding concerns with out-of-pocket affordability in the Marketplaces. As of June 2020, nearly 30% of Covered California enrollees were enrolled in a Bronze Plan with an $8,200 single deductible.

Most people receive help paying for insurance, either from the government or an employer. There are two groups of uninsured that receive no premium help, the largest being the more than a million undocumented Californians who are not offered job-based coverage and who are not eligible for Medi-Cal (which is available only to those with low-income under age 26). The only other group that receives no premium help is the approximately 170,000 people who are eligible for Covered California, but do not receive a subsidy because their premium already costs less than 8.5% of income. The vast majority of these individuals have income over 400% FPL.

In contrast to the high uninsured rates for undocumented Californians and those eligible for Covered California, approximately 5% of those eligible for Medi-Cal are uninsured, or approximately 610,000 uninsured compared to the more than 11 million Californians age 0-64 enrolled in full-scope Medi-Cal coverage.[2] These individuals may not realize they are eligible, face barriers in the enrollment process, or have other reasons for not enrolling. One barrier to Medi-Cal enrollment in recent years — the Trump Administration’s changes to the public charge rule — resulted in a chilling effect on enrollment by immigrant families that may persist even though the rule was recently permanently blocked. 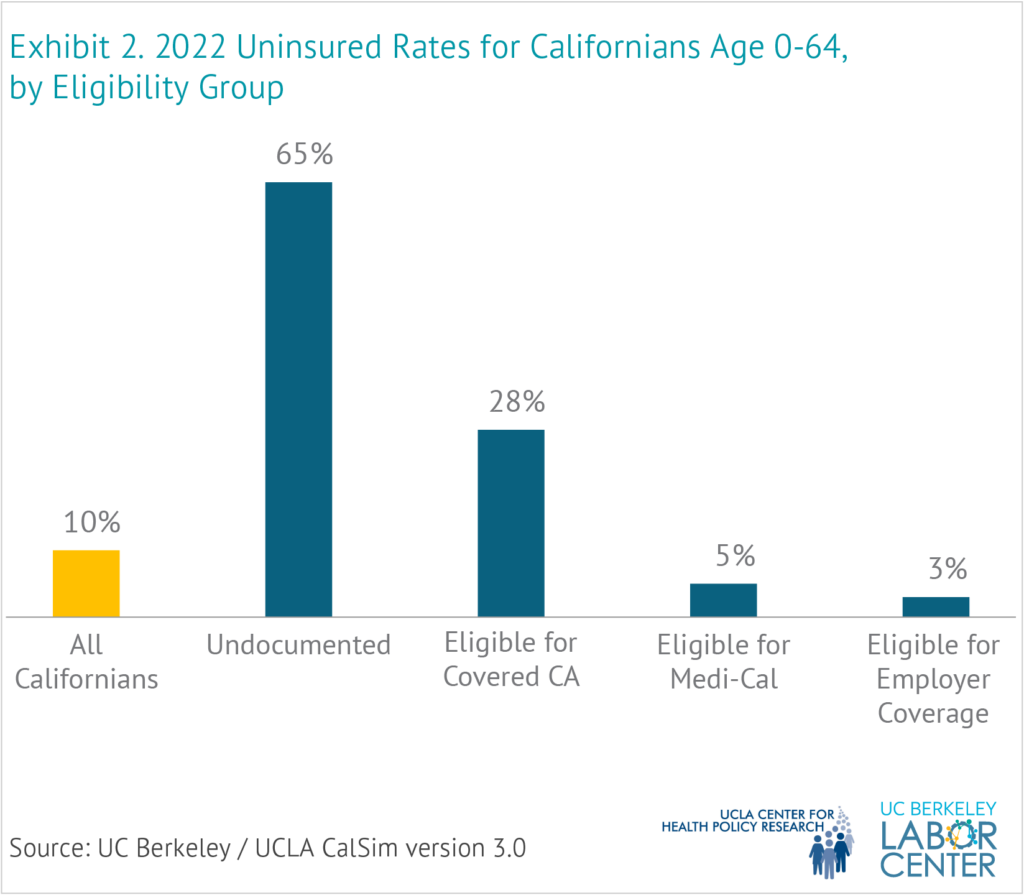 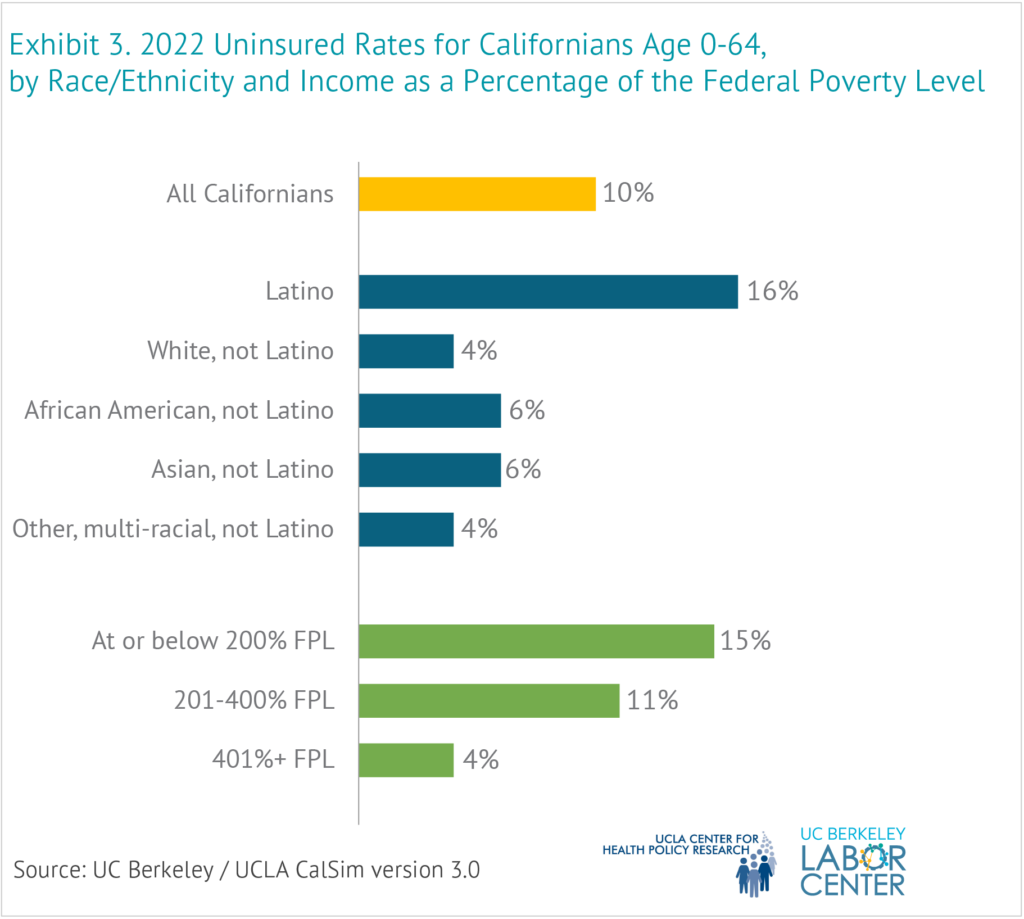 The COVID-19 pandemic has further highlighted the importance of ensuring that all Californians have health coverage. As the state explores options for the unified financing of health care, policymakers are simultaneously working toward universal coverage under the current system.

The American Rescue Plan is projected to increase the number of people insured through Covered California in 2022, but to cement those coverage gains Congress would need to make the additional federal premium subsidies permanent. To continue to improve premium and out-of-pocket affordability for those enrolled in the individual market and the 800,000 who are projected to continue to remain uninsured further action is needed from federal or state policymakers.

The biggest step the state could take to move California closer to universal coverage is expanding Medi-Cal regardless of immigration status. Since 2014, California policymakers have considered proposals to expand Medi-Cal eligibility to all low-income Californians regardless of immigration status and have taken important steps to expand coverage to children and young adults up to age 26. This policy is well-targeted to moving the state closer to universal coverage because 89% of low-income undocumented California adults lack insurance, and a majority of low-income undocumented adults (61%) have income in the Medi-Cal eligibility range, according to UCLA research. Furthermore, the vast majority of undocumented adults are already enrolled in restricted-scope Medi-Cal that covers emergency and pregnancy-related services and could be automatically transitioned to full benefits on the first day the policy is effective. If Medi-Cal were expanded to low-income adults of all ages, nearly 950,000 Californians would be projected to enroll, reducing the number of uninsured Californians by more than one-quarter.

[2] These projections do not reflect the impact of the Medicaid continuous coverage requirement which began early in the pandemic and is projected to end by December 2021; this requirement may have resulted in an even higher Medi-Cal enrollment rate than usual.