HomePublicationsReportThe Union Effect in California #2: Gains for Women, Workers of Color, and Immigrants

Second of a three-part series, The Union Effect in California.

Unions raise wages and increase access to workplace benefits for their members, and this is especially true for workers who have historically been shut out of access to good jobs in the U.S. Today, women, workers of color, and immigrants see significant gains from joining a union on a wide range of measures of job quality (see Bucknor 2016; Jones, Schmitt and Wu 2014; Bivens et al. 2017; McCall 2001; Shaw and Anderson 2018; Bound and Dresser 1999; McNicholas 2018).

There are multiple reasons for this union effect. Collective bargaining agreements often standardize wage rates across similar occupations doing similar tasks, and establish objective procedures for hiring and awarding raises and promotions. Unions can narrow the wage gap between workers with different skills; they can also increase skill levels by providing high-quality apprenticeships and other training programs for workers without college degrees. Unions also often bargain for pay transparency and grievance procedures for discrimination cases. All of these measures can reduce wage differentials and occupational segregation in the workplace itself, as well as help offset the negative career effects of unequal access to good schools and job-hiring networks. As is the case in other U.S. institutions, there is a long history of racism, sexism, and nativism in the U.S. labor movement, which unions continue to work to address. But over time, women, workers of color, and immigrants have seen gains in union leadership and Black workers in particular have above-average rates of unionization (Jacobs and Thomason 2018).

In this report, we present data for the state of California on the union advantage in wages and employer-sponsored health and retirement benefits for women, workers of color, and immigrants.

We first analyze average hourly wages by race, gender, and foreign-born status in California, for union
and non-union workers (see Appendix for details on data and methods). We define union workers as those who are either members of a union or covered by a union contract. Throughout this report, Latino/as of all races are included in the Latino/a category and are excluded from the White, Black, and Asian categories.

As shown in Figure 1, workers in California overall have higher wages when covered by a union contract, and those workers who earn the least in non-union workplaces gain the most. Specifically:

While union coverage does not eliminate race, gender, and immigrant gaps in wages, it does reduce them. 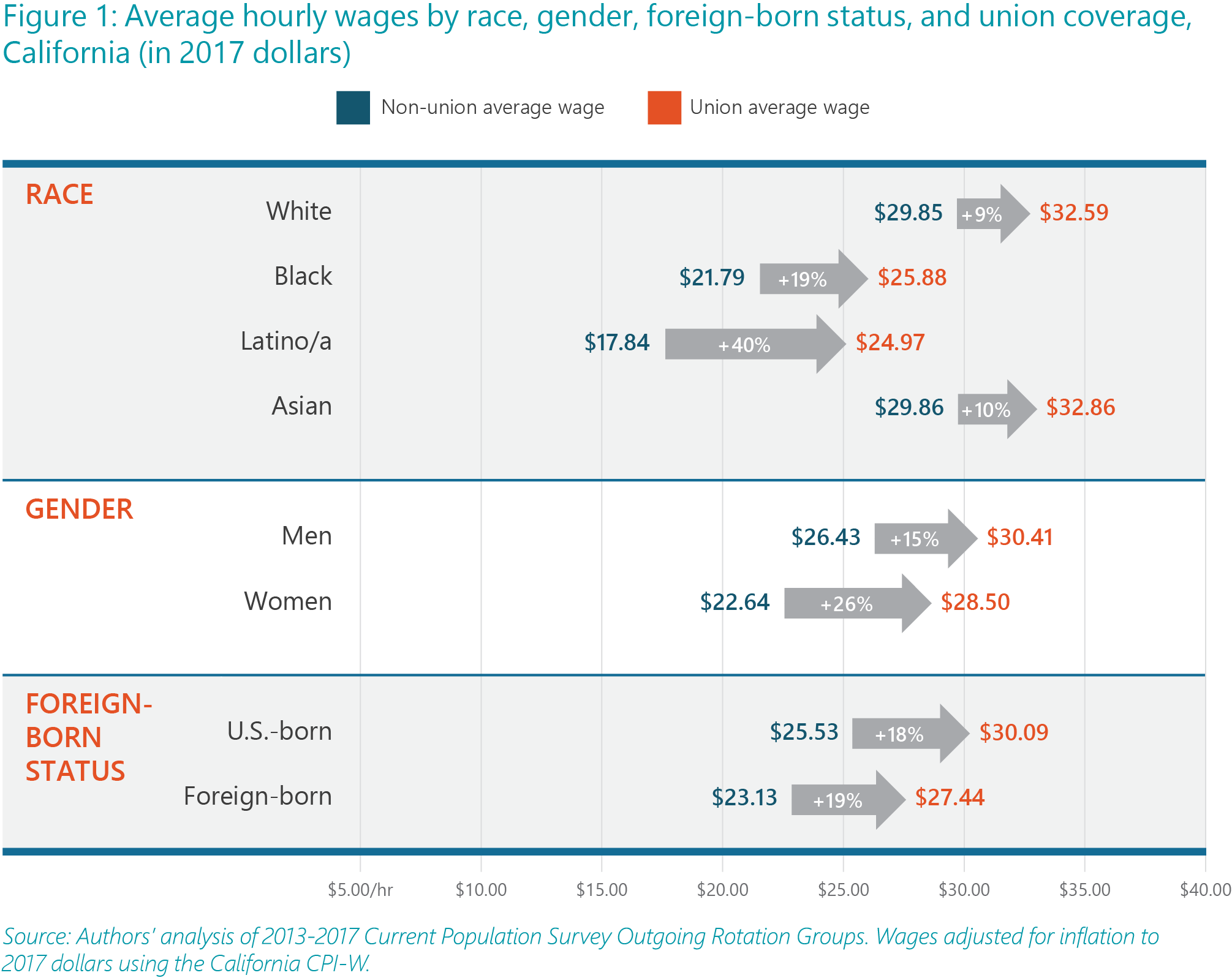 We next analyze the proportion of workers who have access to health insurance and retirement benefits at their job, by race, gender, and foreign-born status in California, for union and non-union workers (see Appendix for details on data and methods). In this section, small sample sizes mean that we can only compare all workers of color as a group to White workers.

As shown in Figure 2, workers in California are more likely to have employer-sponsored health insurance through their employer if they are covered by a union contract, with women, workers of color, and immigrants seeing the largest gains. Specifically:

While union coverage does not entirely eliminate race, gender, and immigrant gaps in access to employer-sponsored health insurance, it does significantly reduce them. 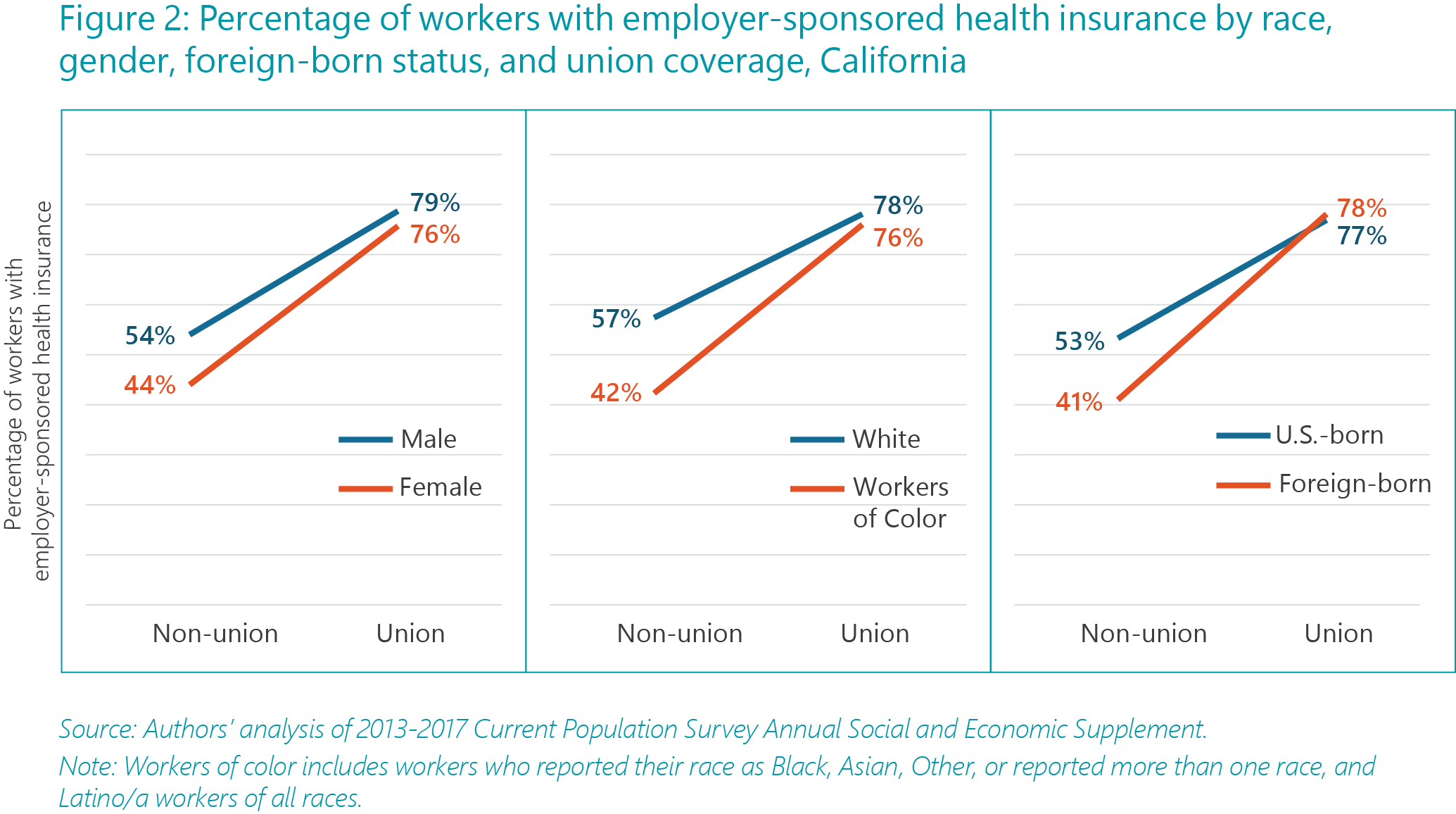 As shown in Figure 3, California workers are more likely to be offered a retirement or pension plan by their employer if they are covered by a union, with women and workers of color seeing larger gains. Specifically: 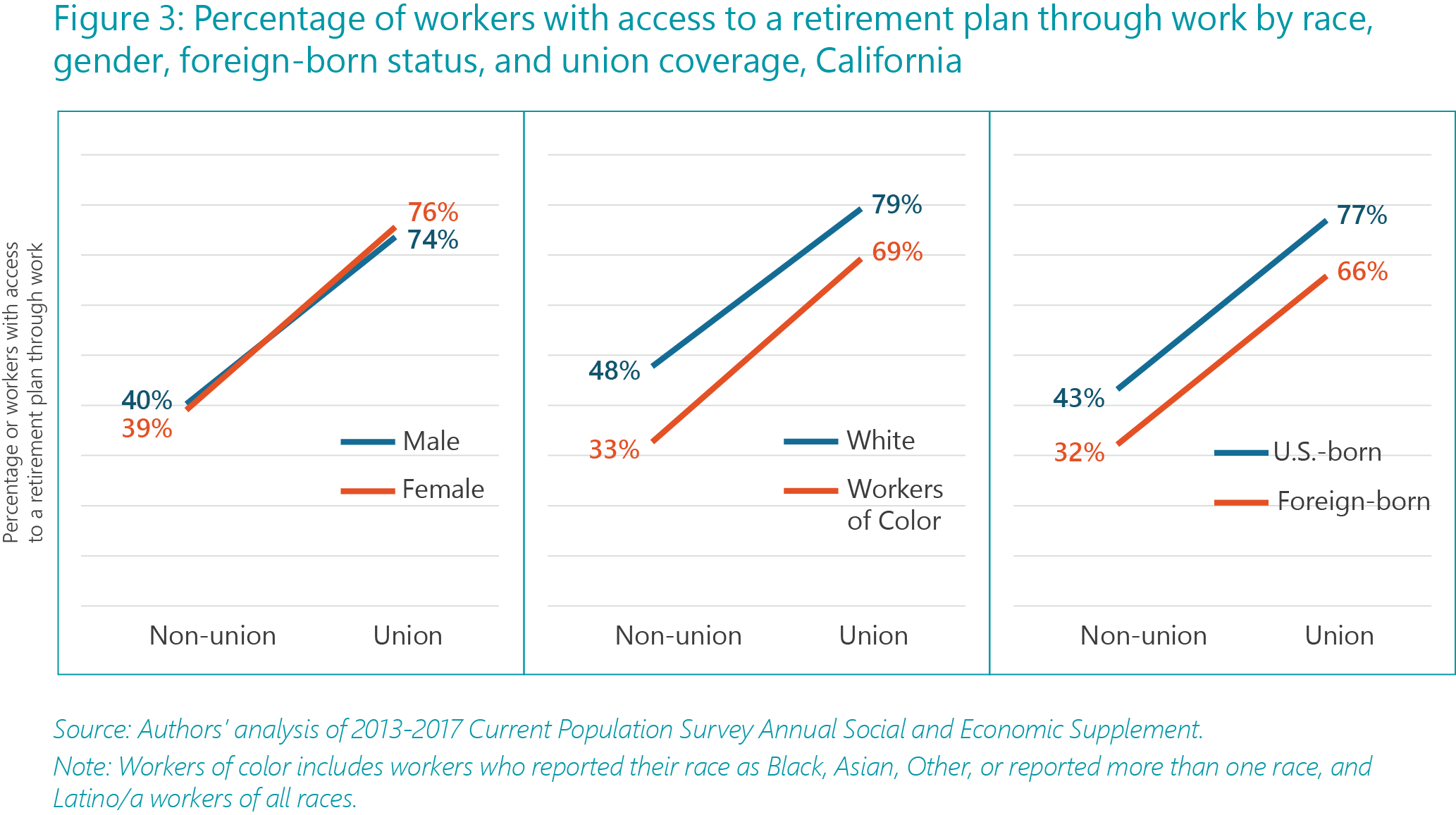 The above estimates of union premiums for wages and benefits do not adjust for any differences between union and non-union workers. However, we know that union workers differ both in terms of their demographic characteristics (e.g., age, experience, education) and in terms of the industries that they work in. We therefore use a regression model that enables us to compare workers that are similar on a range of characteristics and estimate adjusted union premiums for wages and benefits (see Appendix for a detailed description of the regression models).

As shown in Tables 1 and 2, even after accounting for differences in worker and industry characteristics, all workers continue to see higher wages and increased access to employer-provided benefits as a result of collective bargaining. In addition, our analysis that there is a stronger union effect for women, workers of color, and immigrants compared to White and male workers is generally confirmed. The main exception is that the regression-adjusted union wage premium for women is somewhat lower than the adjusted premium for men. This is due to the fact that the female unionized workforce includes significant numbers of highly educated teachers and nurses whose earnings place them higher up in the wage distribution; this compositional effect largely explains the bigger unadjusted union wage advantage for women relative to men in Figure 1.

This report uses the Current Population Survey (CPS) for California. Specifically, we use the Economic Policy Institute CPS Outgoing Rotation Group (ORG) files (2013-2017) for our hourly wage estimates and the IPUMS CPS Annual Social and Economic Supplement (ASEC) (2013-2017) for estimates of health and retirement benefits. In all of our analyses, the sample is restricted to employed wage and salary workers age 18 to 64 who live in California. For wage estimates, we further restrict our sample to exclude observations with imputed wages. We define union workers as those who are either members of a union or covered by a union contract. Latino/as of all races are included in the Latino/a category and are excluded from the White, Black, and Asian categories. A small number of workers (two percent) in our sample identify as “Other” or select more than one category when answering questions about their race; small sample sizes do not permit separate analyses of this group.

We estimate the adjusted union wage premium using ordinary least squares regression of log wages on union status and include controls for age, age squared, two-digit industry, education, marital status, year, and where appropriate, race/ethnicity, gender, and foreign-born status. We then exponentiate the coefficient on union status and subtract one to convert from log points to a percentage estimate. All regression-adjusted estimates of the union wage premium are significant at the 0.01 level.

Adjusted estimates for health and retirement union premiums were estimated using logit regressions and include controls for age, age squared, two-digit industry, education, marital status, year, and where appropriate, race/ethnicity, gender, and foreign-born status. We report the percentage difference in the marginal effects for union workers, estimated with and without the estimated union effect. All regression estimates for adjusted union benefit premiums are significant at the 0.01 level.

Jacobs, Ken, and Sarah Thomason. 2018. “The Union Effect in California #1: Wages, Benefits, and Use of Public Safety Net Programs.” https://laborcenter.berkeley.edu/union-effect-in-california-1/.

Sarah Thomason and Annette Bernhardt. The Union Effect in California #2: Gains for Women, Workers of Color, and Immigrants. Center for Labor Research and Education, University of California, Berkeley. June 2018.
https://laborcenter.berkeley.edu/union-effect-in-california-2/.

The views expressed in this research brief are those of the authors and do not necessarily represent the Regents of the University of California, the UC Berkeley Institute for Research on Labor and Employment, or collaborating organizations or funders.