In the spring of 2004, the major grocery chains, including Safeway, Ralphs and Albertsons settled on a two tier contract with the United Food and Commercial Workers (UFCW) locals in Southern California. For newly hired workers, this contract significantly reduces the wage levels and increases the time it takes for them to reach the top level of pay. New hires also are required to wait longer to be eligible for both individual (1 year) and family health benefits (30 months), and must pay 20% of the costs of these health plans. Wages for incumbent workers are frozen and maintain the current rate of wage progression. All workers have to contribute more to the health benefits fund. Overall, the employers have reduced their per-hour contribution to the benefits fund for both new and incumbent workers.

This restructuring affects over 70,000 working families in the LA area, and represents a major break in the compensation standards for the grocery industry – one of the few retail industries that have historically offered family-supporting wages and benefits. As UFCW locals throughout the state negotiate their contracts in the summer and fall of 2004, the impact from this type of two-tier restructuring of wages and benefits for the 120,000 Californian grocery workers can be can be substantial – for both workers and state taxpayers. 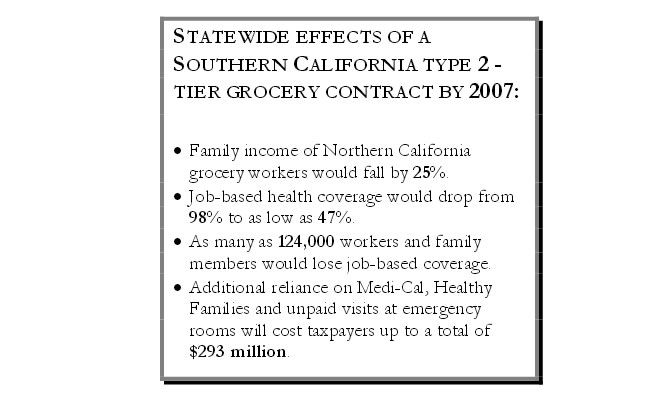 In this report, we look at the statewide impact on grocery worker wages and health care coverage, as well as public costs due to reduced employer health coverage, from a two-tier contract similar to that signed in Southern California. Wage levels have historically varied between the Northern and the Southern parts of the state. Therefore, to project a Tier 2 wage and benefit rate for new workers in Northern California, we use the proportional changes in the starting and maximum wage levels for each job category in Southern California, and apply it to current wages in the North. We assume that the new progression (the time it takes to move from the lowest to highest wage category) in Northern California is the same as the new progression in the South. We also apply the new contract changes in health insurance eligibility and employee premium contributions in Southern California to UFCW members throughout the state. Finally, we project the proportion of workers in each tier over time by estimating the impact of employee turnover on the number of new hires over time. We use both historical turnover rates at the unionized grocers (9% for full time workers and 27% for part timers) and the industry average (13% for full timers and 58% for part timers) to create “high” and a “low” scenarios for our predictions. Our analysis uses wage, turnover and benefits data from UFCW, and supplements it data on public health take-up and costs from the March 2003 Current Population Survey. Health insurance take-up is estimated using the 2003 California Establishment Survey. The full report can be accessed at: https://laborcenter.berkeley.edu/pdf/2004/grocery_fullreport.pdf

The calculations do not take into account the declining quality of care or financial viability of the joint health fund due to reduced funding from the grocers. Although these issues could not be addressed due to data limitations, they may be significant.

Our analysis of the state-wide consequences of a two tier contract modeled after Southern California reveals the following:

The average hourly wage of unionized supermarket workers would decline between 18% and 28% by the end of the contract in 2007 and between 22% and 30% by 2010 if the same contract is ex tended for another three years, as shown in Figure 1a. The lower estimates of wage decline assume that the turnover rate stays at its historical level for the unionized grocery sector, while the higher estimates assume that the turnover rate rises to the overall industry average in response to the wage freeze and benefits reduction. Figure 1b shows that the corresponding drop in income for grocery workers would range between $3,700 and $6,100 by 2007, placing them below what a worker in a dual earner family with 2 children needs to make in order to reach self-sufficiency. 1 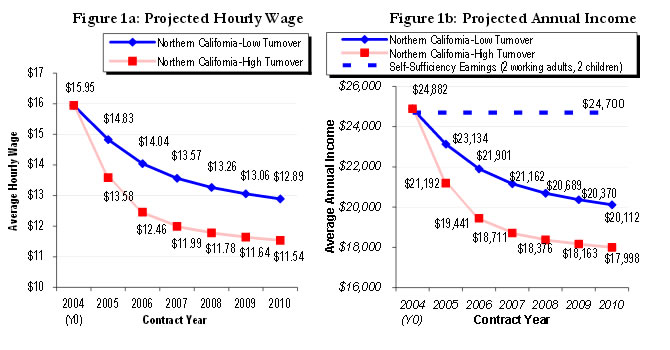 By 2007, we estimate that between 26% and 47% the unionized grocer y workforce would be ineligible for either single or family health coverage, as shown in Figure 2. Currently, over 98% of unionized grocery workers are enrolled in the grocers’ health plan.

By 2007, between 33% and 53% of unionized workers would no longer be enrolled in the Grocers’ plan – as compared to 98% enrollment presently. As shown in Figure 3, this implies that an additional 89,000 to 124,000 workers and family members would no longer be insured by the joint union/employer health plan. This drop in health care insurance coverage is due both to the longer waiting period for new hires to be eligible for insurance, and due to the lower take-up of health insurance by workers who would no longer be able to afford the premiums and co-pays required. 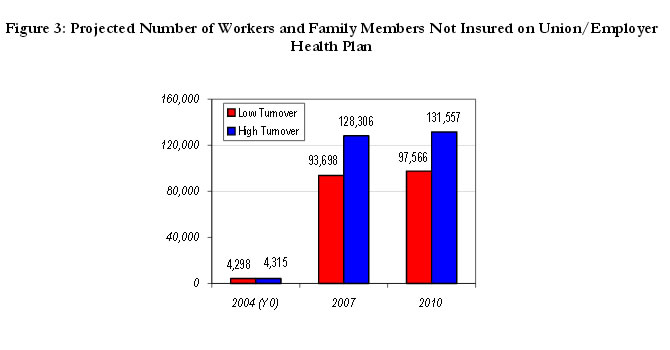 As workers are pushed out of job-based health coverage, costs would be shifted to other stakeholders, as shown in Figure 4. Between 10 and 13% of the workforce would move to a spousal plan, between 7 and 10% would enroll in a public health plan, and between 15 to 19% will go uninsured. These uninsured individuals will often rely on emergency room visits for their health needs, increasing the taxpayer bill for uncompensated care typically through the county health system. 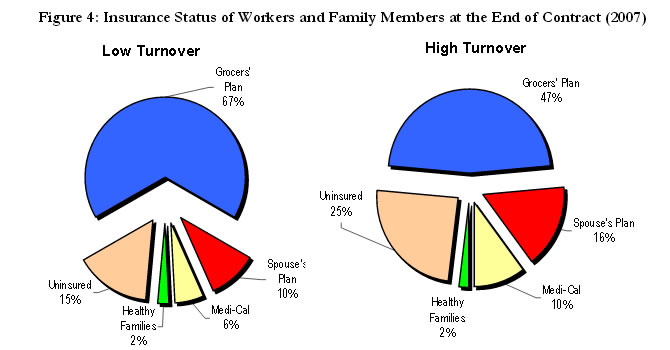 As workers and family members rely on public health plans and unpaid emergency room visits, at least $66 million and up to $102 million in health care costs would be shifted on to the taxpayer s annually, as shown in Figure 5. By the end of the contract in 2007, the public will have provided a subsidy to grocers at a total cost of $202 million to $293 million. 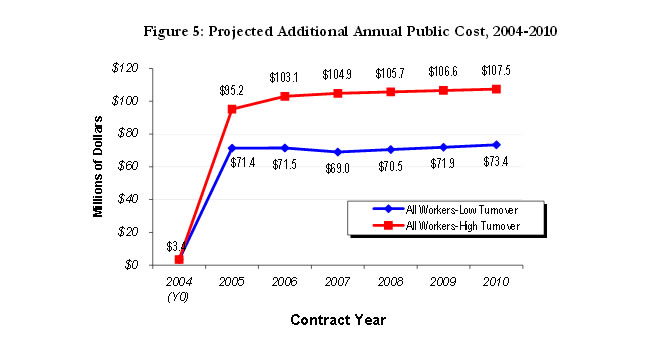 Much of these additional public costs would be borne by taxpayers at the county level, as shown in Figure 6. Around 55% of the health care impact is attributable to uncompensated care for uninsured persons who will typically use emergency rooms at county hospitals, while 45% of the costs would be through the (state and federally funded) Medi-Cal and Healthy Families program.