HomePublicationsReportWhat would Uber and Lyft owe to the State Unemployment Insurance Fund?

All employers must pay an Unemployment Insurance tax for each of their workers. In California, the tax rate for new employers is 3.4 percent of pay, up to the taxable wage limit of $7,000 a year per employee. But since their beginnings over a decade ago, the transportation network companies (TNCs) Uber and Lyft have not paid into California’s Unemployment Insurance (UI) Fund. Both TNCs have held that their drivers are independent contractors, not employees.

The state has long contested this practice. Since 2015, the California Employment Development Department has found drivers to be employees entitled to unemployment benefits on multiple occasions.[1] And AB5, which was enacted in 2019, tightened the rules for classifying workers as independent contractors under the state’s UI code. Nevertheless, the companies continue to treat their drivers as independent contractors.[2]

To obtain this result, we draw from a number of available datasets to estimate how many workers have driven for each TNC each year, and how many were paid less or more than the $7,000 taxable wage limit. We then apply the 3.4 percent tax rate to each group.

According to company-provided data obtained by the California Air Resources Board, 640,000 distinct workers drove for the two TNCs in 2018.[3] Since UI payments are owed by each company a worker drives for, we adjust the number of drivers to separately count those working for both companies. An analysis by JP Morgan Chase found that 20 percent of online transportation platform drivers worked for more than one platform in any single month.[4] Adjusting for these “multi-app” drivers, we obtain a total of 768,000 drivers for whom TNCs would have owed UI taxes in 2018.[5] 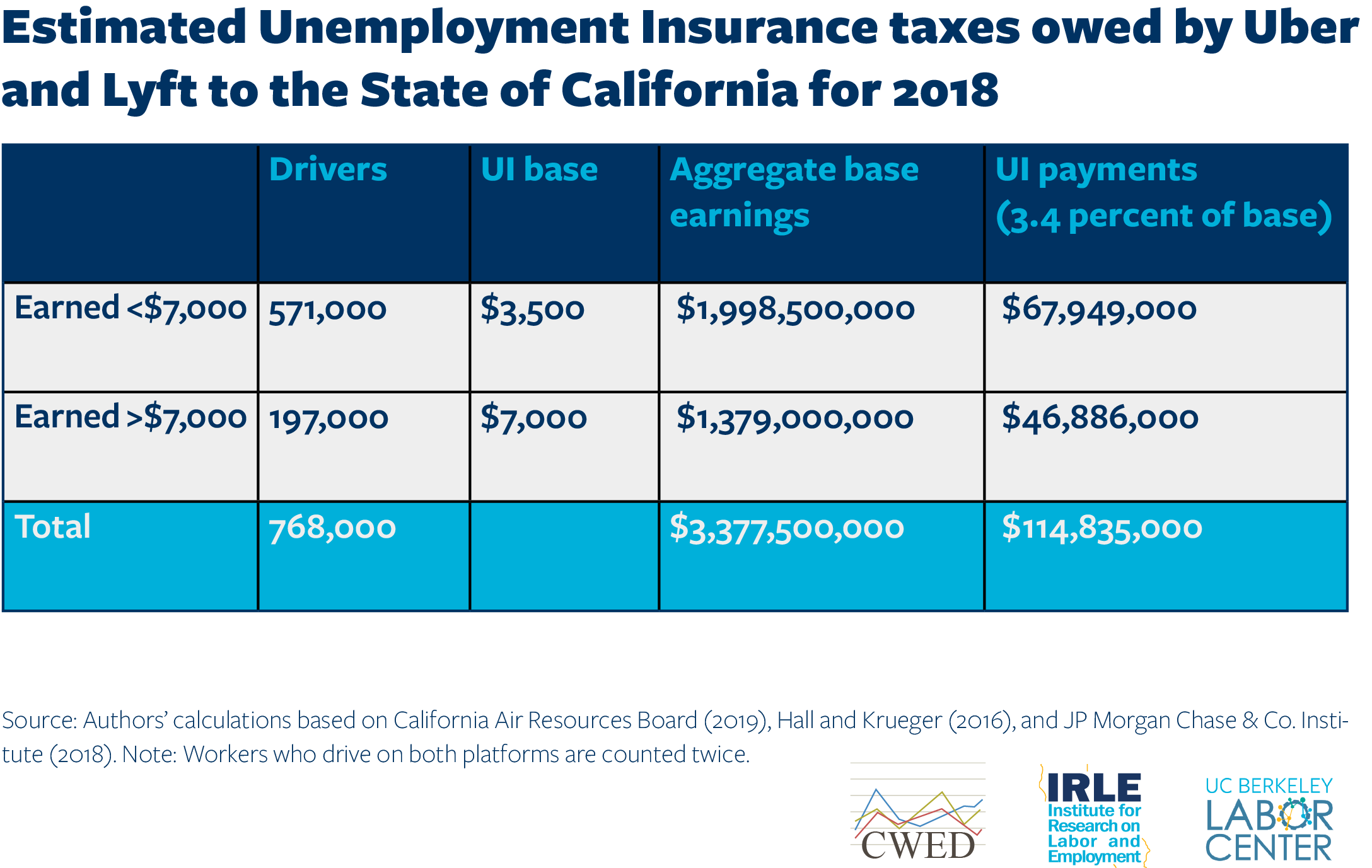 As the table shows, the drivers’ 2018 aggregate taxable base earnings totaled $3.38 billion and the associated UI payments would have totaled $114.8 million.

The TNCs grew rapidly between 2014 and 2018, followed by slower growth in in 2019. Since data on TNC growth in California are not available, we simulate California’s TNC growth trajectory over these years by using data on King County, Washington. We can then obtain the number of drivers who worked in each preceding year and produce a five-year estimate of missed UI taxes.[8] We estimate that if the drivers were treated as employees, the companies would have been required to pay $413 million into the California UI fund over the five-year period from 2014 to 2019.

New Jersey, which has a much higher UI taxable wage base[9] and higher tax rate, recently fined Uber for $530 million in unpaid UI taxes between 2014 and 2018, and $119 million in missed interest payments.[10]

Uber and Lyft drivers have lost more than 80 percent of their income as a result of the COVID-19 crisis.[11]For the moment, under the CARES Act, independent contractors qualify for unemployment benefits under the new Pandemic Unemployment Assistance program (PUA). Employees (those with W-2 earnings) generally qualify for regular UI and cannot also access PUA, even if they have independent contractor income. About 76 percent of Californians with online earnings also have other W-2 income (Collins et al. 2019). These drivers will receive higher benefits if their TNC earnings are treated as employment income.

***
Ken Jacobs is the Chair of the UC Berkeley Labor Center. Michael Reich is a Professor of The Graduate School, University of California, Berkeley and Co-Chair, Center on Wage and Employment Dynamics. He is a co-author of the report that led to a driver pay standard in New York City.

The Labor Center and the Center for Wage and Employment Dynamics (CWED) are both projects of the Institute for Research on Labor and Employment (IRLE) at UC Berkeley. IRLE connects world-class research with policy to improve workers’ lives, communities, and society.

We thank Donna Mandel, Dmitri Koustas and Jesse Rothstein for their excellent assistance.

To estimate the amount the two TNCs would have paid in UI, we need to know how many workers earned more or less than the UI base threshold of $7,000. To do so, we using existing data to estimate the distribution of hours worked over the course of the year and average earnings per hour.

To estimate the distribution of hours worked over the course of the year and average earnings we use data from Uber’s Chief Economist Jonathan Hall and former Department of Labor Chief Economist Alan Krueger on drivers’ weekly work hours. Hall and Krueger (2016) provide earnings and the distribution of weekly hours worked for San Francisco and Los Angeles Counties, using four weekly hours bins: 1-15, 16-34, 35-49 and 50+.[12] We obtained the number of months drivers worked in a year from JP Morgan Chase (2018).

The transportation consulting company Fehr and Peers (2019) and the California Air Resources Board (2019) provide the number of 2018 TNC vehicle miles traveled in the San Francisco and Los Angeles metro areas. [13] These two metros account for nearly 80 percent of TNC vehicle miles in the state. We then compute weighted averages of the two metro area’s distribution of hours and drivers’ hourly earnings. As Table A shows, the result is an estimated average hourly earnings of $18.85 in 2015. 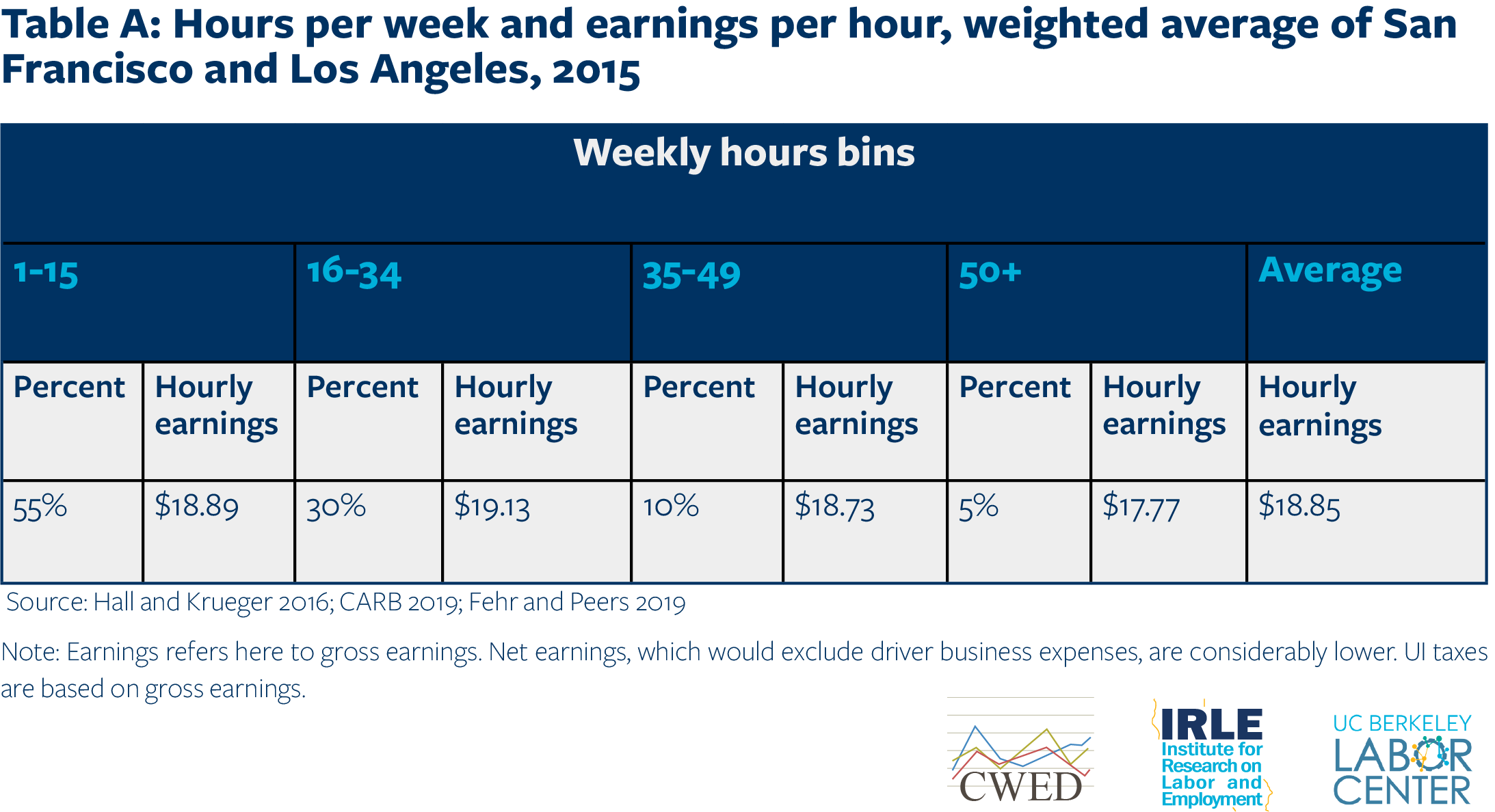 We conservatively assume that nominal hourly earnings remained constant from 2015 to 2019.

Our final dataset, on the distribution of months worked in a year, comes from the Farrell, Grieg and Houmudi (2018) analysis of JP Morgan Chase data. Using national data from Chase credit card accounts, these authors find that 58 percent of the drivers worked 1-3 months for TNCs, 19.2 percent worked 4-6 months, 10 percent worked 7 to 9 months, and 12.5 percent worked 10-12 months.

To corroborate our findings, we also examined results of an analysis of platform workers (mainly rideshare drivers) based on national IRS data reported on 1099 forms available in Collins, Garin, Jackson, Koustas and Payne (2019). Applying their results to California, we find that the national IRS data imply the owed amount of UI payments lies within 1.3 percent of our estimate above.

[1] Pamela A. Izvanariu, Matters Settled But Not Resolved: Worker Misclassification in the Rideshare Sector, 66 DePaul L. Rev. (2017) Available at: http://via.library.depaul.edu/law-review/vol66/iss1/7

[5] This is likely an undercount, since a driver may be unduplicated in a single month, but work for more than one company over the course of a year.

[6]The distribution of annual hours driven by all drivers would be much more concentrated among full-time drivers.

[7] Brett Collins, Andrew Garin, Emilie Jackson, Dmitri Koustas and Mark Paynek. Is Gig Work Replacing Traditional Employment? Evidence from Two Decades of Tax Returns. IRS SOI Joint Statistical Research Program, 2019. We used other results in this report to estimate the proportion of drivers with earnings under $7,000. The results were extremely close to our findings using other data. See our Technical Appendix.

[14] For the closed intervals we use the mid-point, with the exception of drivers working in one to three months, which will include a disproportionate share of short term drivers. Rather than using the mid-point we calibrate the number so that the average hours worked per driver matches our estimates from the CARB data. For the open interval (50+) we use 50 which gives us a conservative estimate. If we use 55, the numbers would be somewhat higher.