HomePublicationsReportWhich California Industries would be Most Affected by ACA Repeal and Cuts to Medi-Cal?

Under the Affordable Care Act (ACA), 3.7 million Californians enrolled in the ACA’s Medi-Cal expansion, and another 1.2 million Californians received federal subsidies that make purchasing insurance through Covered California more affordable.[1] These coverage gains are at risk if the ACA is repealed. Further cuts to Medi-Cal are also possible if Congress changes how the federal government funds Medicaid by converting it to a block grant program or applying a cap on spending per enrollee. Under such a proposal, federal Medicaid spending could be cut by one-third to one-half over a ten-year period, according to national estimates by the Center on Budget and Policy Priorities.[2]

Most Californians who rely on these programs are in working families. Eight out of ten Medi-Cal enrollees are in families with at least one worker, according to the Kaiser Family Foundation.[3] The majority of those enrolled in Covered California with subsidies are also part of working families.[4]

In this data brief, we find that California workers who are employed in certain industries, including agriculture and parts of the service industry such as restaurants and retail, disproportionately enroll in ACA coverage, which we define as the Medi-Cal expansion and subsidized coverage through Covered California. Workers in these industries also enroll in the overall Medi-Cal program (including the expansion and all other eligibility categories) at rates higher than the California workforce overall. Not only would workers in these industries be harmed by ACA repeal and federal funding cuts to Medicaid, but firms whose employees lose health insurance may face higher absenteeism and reduced productivity.

We first examine California workers’ enrollment in coverage programs of the Affordable Care Act: the Medi-Cal expansion and Covered California with subsidies. (For simplicity we will call this ACA coverage.)

In this analysis we also estimate enrollment in the overall Medi-Cal program, including the expansion plus eligibility categories for parents, individuals with disabilities, and all other aid codes in which adults ages 18-64 are enrolled. Thus, in this analysis there is some overlap in the populations of those receiving ACA coverage and those enrolled in Medi-Cal.

Workers in certain industries in California would be more likely to face loss of insurance under ACA repeal. While 13.9% of California workers ages 18-64 were estimated to be enrolled in the Medi-Cal expansion or Covered California with subsidies in 2015, the enrollment rates for these ACA coverage programs were especially high for restaurant workers (24.4%); retail workers (19.5%); workers in other parts of the service industry like auto repair, hair salons, and private households (22.2%); temporary workers, security guards, and landscapers (20.7%); and workers in agriculture and related industries[6] (16.9%) (Exhibit 1). The estimated number of workers enrolled by industry in 2015 is shown in Appendix Exhibit A. 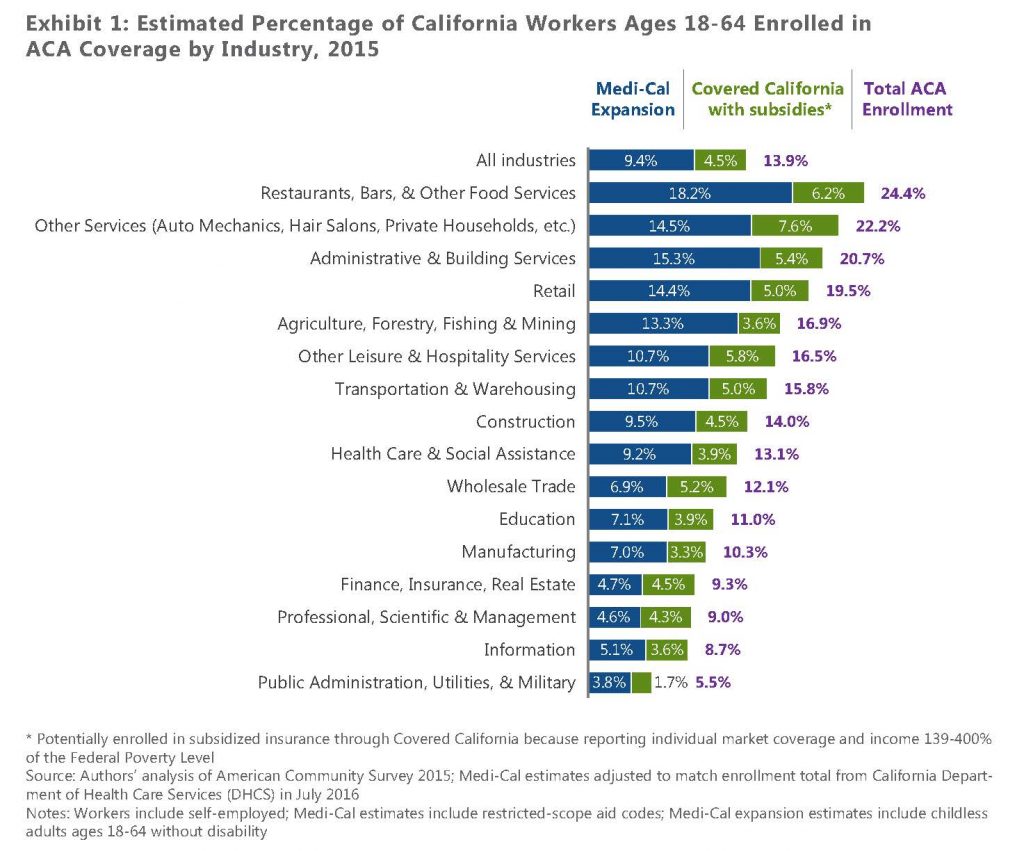 Nearly one in five (18.7%) workers ages 18-64 in California were estimated to be enrolled in Medi-Cal in 2015, whether they were eligible due to the Medi-Cal expansion under the ACA or were already eligible prior to the law because they were a parent, had a disability, or met some other categorical eligibility criteria. In certain industries, more than one-quarter or one-third of workers were estimated to be enrolled in Medi-Cal: agriculture and related industries (36.2%); restaurant workers (33.4%); temporary workers, security guards, and landscapers (31.5%); workers in other parts of the service industry like auto repair, hair salons, and private households (29.6%); and retail workers (25.5%) (Exhibit 2). The estimated number of workers enrolled by industry in 2015 is shown in Appendix Exhibit A. 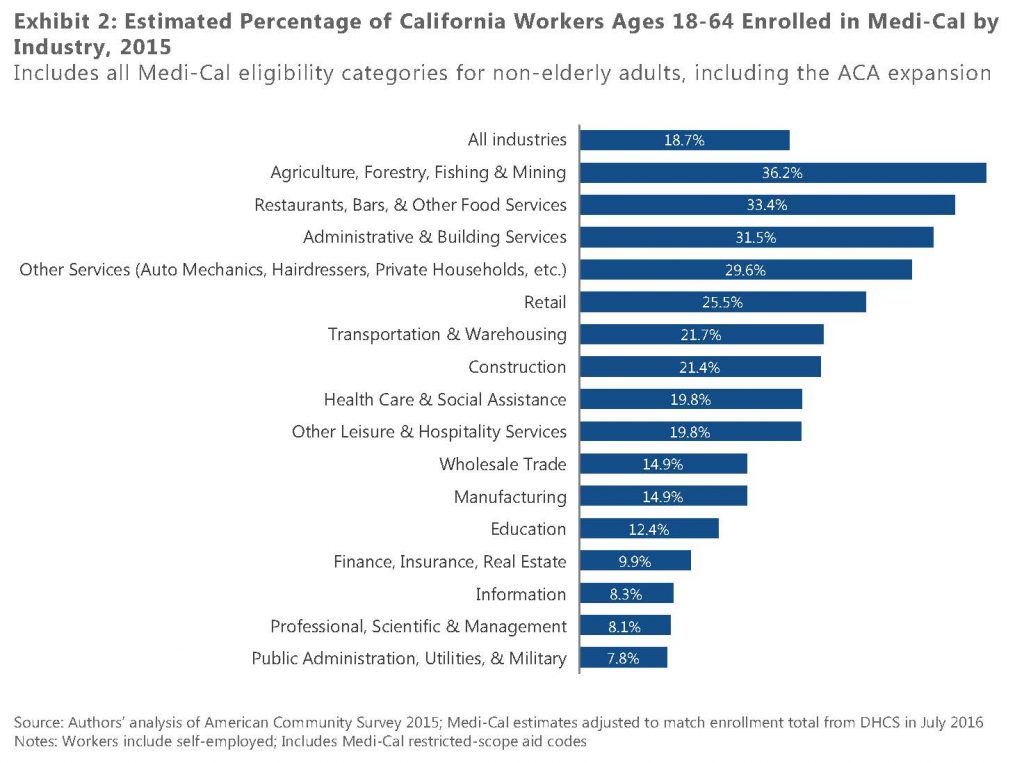 If Congress repeals the ACA or makes changes to Medicaid funding that result in cuts to eligibility or benefits, many workers would become uninsured, have less access to healthcare services, or struggle to afford healthcare or insurance. The firms that employ them could also face negative consequences. Research has shown that workers with health insurance are less likely to miss work and miss fewer days of work than those without insurance, even after taking into account underlying differences in health between the two groups.[9] Health issues also affect performance at work. Numerous studies have quantified the economic losses from reduced productivity due to health problems.[10] Few studies have analyzed the direct relationship between workers’ access to health insurance and their productivity levels, but one analysis of manufacturing plants found that workers offered health insurance did have greater productivity.[11]

Workers in certain California industries – agriculture and service industries including restaurants, retail, auto repair, hair salons, private households, and building services – would be especially affected by ACA repeal because their rates of combined enrollment in the Medi-Cal expansion and subsidized insurance through Covered California (ranging from 16.9% to 24.4%) are higher than for the state’s workforce overall (13.9%). In these same industries, between one-quarter and one-third of workers are enrolled in the overall Medi-Cal program, compared to less than one-fifth of the workforce generally, indicating that potential reductions in eligibility or cuts to benefits resulting from federal policy change would hit workers in these industries harder. Firms that employ these workers could also be harmed by increased absenteeism and reduced productivity due to the health insurance losses. 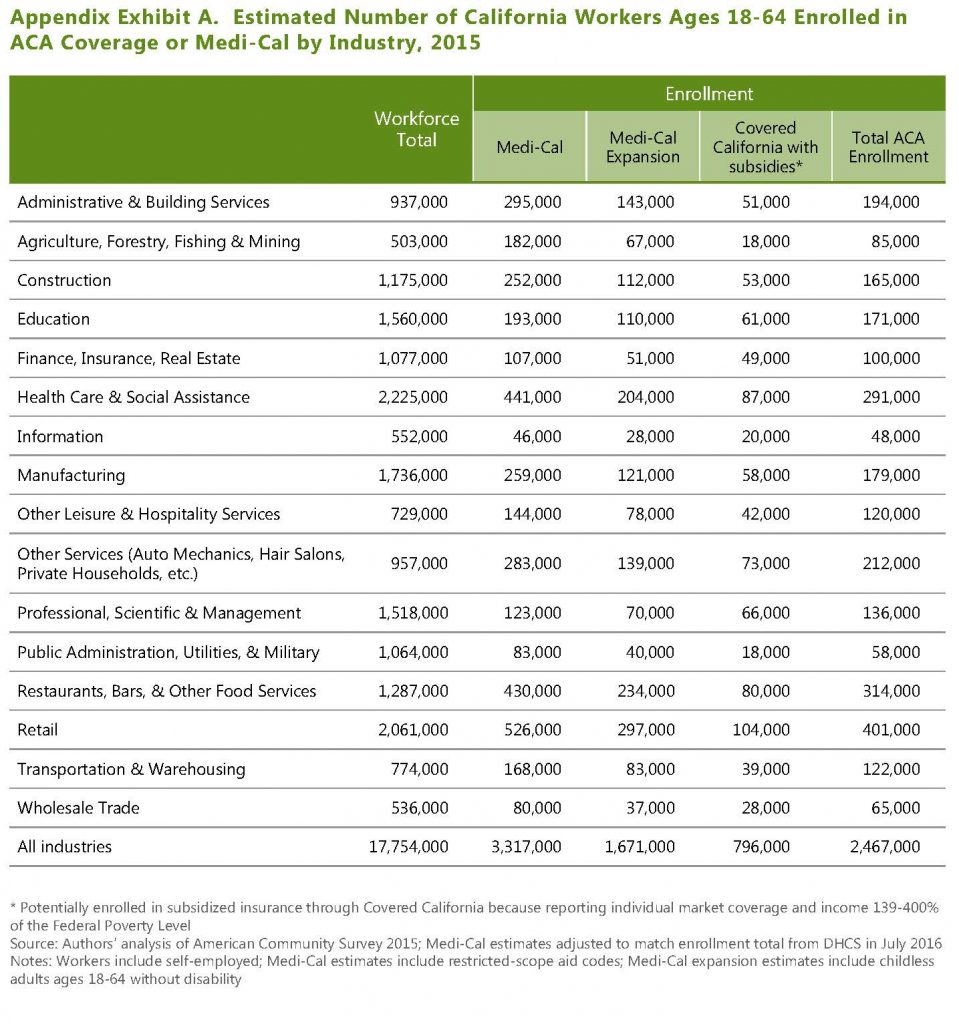 [2] Park E and Solomon J. Per Capita Caps or Block Grants would Lead to Large and Growing Cuts in State Medicaid Programs. Center on Budget and Policy Priorities, June 22, 2016.

[4] Data is not available on which Covered California enrollees receiving subsidies are in working families. Using the methods described in this brief, we estimate that 796,000 California working adults were enrolled in individual market insurance and had income in the range that made them potentially eligible for premium subsidies (Appendix Exhibit A), out of approximately 1.2 million individuals enrolled in subsidized insurance through Covered California in 2015 (Covered California, Active Member Profile, June 2015). An unknown share of the approximately 400,000 remaining enrollees may have working spouses or parents. These estimates suggest that at least the majority of enrollees are in working families, though the precise percentage remains unknown.

[6] The estimated enrollment rates for agricultural workers in this brief reflect our best estimates using the U.S. Census Bureau’s American Community Survey. However, past research has shown that the U.S. Census undercounts farmworker households, especially immigrant farmworker households. (Kissam E, A Summary Review of Research Relevant to Housing Units Missing from the Census Bureau’s Master Address File (MAF), WKF Giving Fund, October 3, 2016.) Therefore, the total size of the agricultural workforce presented in this brief is likely an underestimate. Assuming that farmworkers who are not counted in the survey are more likely to lack eligibility for full-scope Medi-Cal benefits or Covered California due to immigration status, the number of agricultural workers utilizing these programs in this brief may be underestimated, while the share of agricultural workers utilizing the programs might be overestimated.

[9] See for example: Dizioli A and Pinheiro RB, Health Insurance as a Productive Factor, Labour Economics (40), p. 1-24, June 2016; and Lofland JH and Frick KD, Effect of Health Insurance on Workplace Absenteeism in the U.S. Workforce, Journal of Occupational and Environmental Medicine (48): p. 13-21, January 2006.