HomePublicationsReportWhich workers are most at risk of reduced work hours under the Affordable Care Act?

The Affordable Care Act (ACA) requires employers to provide coverage or pay a penalty based on the number of employees working 30 or more hours per week. This data brief looks at which industries have a high percentage of employees working fewer than or slightly above 30 hours, placing them at risk for reduced hours by an employer wishing to avoid penalties. We also look at the distribution of hours worked by type of health coverage. While the penalty only applies to firms with more than 50 full-time equivalent employees, due to data limitations we show all results for workers in firms with more than 100 total employees. Thus, the tables may slightly understate the number of potentially affected workers.

Table 1 below shows the distribution of hours worked by industry in the United States. From this we see that 6.4 million U.S. workers, 8.9 percent of the workers in firms of 100 or more, work 30 to 36 hours a week.[1] An additional 3.6 million workers report that their “work hours vary” and may also be vulnerable to a reduction in work hours. The industries with the highest percentage of employees working slightly over 30 hours are Restaurants, Nursing Homes, Accommodation, Healthcare, Retail Trade, Education and Building Services. The right most columns show the number of workers who are most vulnerable to work reduction, namely, those working 30 to 36 hours, with incomes below 400% of the Federal Poverty Level and not covered by their own employer.[2] The industries with the highest concentration of such workers are Restaurants, Accommodation, Building Services, Nursing Homes and Retail Trade. Retail and Restaurants account for 47 percent of the most vulnerable group. While Healthcare has a higher than average share of employees working between 30 and 36 hours, most in that hours category are in higher income families and/or receive health coverage through their employer.[3] 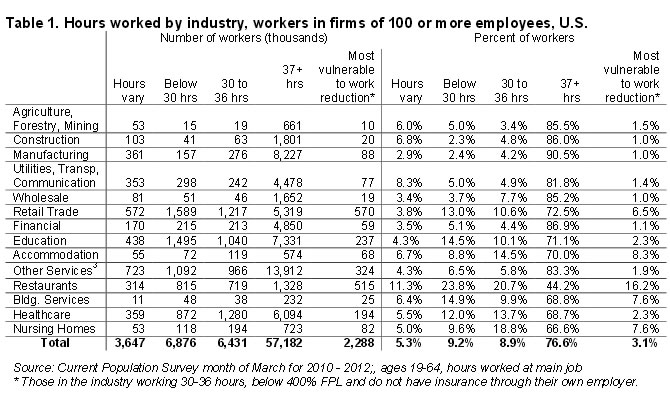 The 2.3 million workers identified as at greatest risk for work hour reduction represent 1.8 percent of the United States workforce. This is consistent with the research on the impact of Hawaii’s health care law on work hours. Hawaii requires firms to provide health insurance to employees working 20 hours a week or more, so the cost to employers for full-time workers are much greater in Hawaii than under the ACA, while the hour threshold is lower. Buchmueller, DiNardo and Valetta (2011) found a 1.4 percentage point increase in the share of employees working less than 20 hours a week as a result of the law.[4] In Massachusetts, where the employer penalty is smaller than in the ACA ($295 per year), there was no evidence of a disproportionate shift towards part-time work compared to the rest of the nation.[5]

[1] In addition there are 960,000 working 30-36 hours for firms with 25-99 employees. We estimate about half of these work for employers with greater than 50 FTEs. Thus, in total around 7.4 million workers work 30-36 hours for firms that will be subject to penalties if they do not provide health coverage.

[3] In Table 1, Other Services includes professional, technical and administrative support services, along with arts, entertainment, recreation, repair, maintenance, laundry, and all personal services.