HomePublicationsReportWho Benefits from the Proposed Amendment to the Senate Excise Tax on Employer Health Premiums?

The Senate health reform bill passed on December 24, 2009, contained an excise tax on high-cost employer health insurance plans; in mid-January 2010 the White House and union leaders negotiated a proposed amendment to the Senate excise tax provision. Several recent studies have evaluated the effectiveness of the tax as a revenue source and cost containment measure.1 This report focuses on how the impact of the tax as passed by the Senate and the proposed amendment would differ for union members and workers not covered by a collective bargaining agreement.

While the potential effect on union plans is significant, union members are a relatively small fraction of the total population that would ultimately be affected by the tax, under either the Senate bill (December 2009) or the proposed amendment (January 2010). Key findings:

The proposed amendment maintains many aspects of the original Senate bill. It would tax insurers at 40 percent of the plan’s aggregate value above a high-cost threshold. The threshold would be higher for retirees age 55 and over, electrical and telecommunications installation/repair workers, and individuals in high-risk jobs including longshore workers, emergency responders, firefighters, and those working in law enforcement, construction, mining, agriculture, forestry and fishing. The threshold would also be increased temporarily for the 17 states with the highest health care costs. The threshold would continue to be indexed to inflation (CPI-U) plus one percent, causing the share of workers affected by the tax to grow over time, since premiums are likely to grow at a much faster rate than inflation (6.1 percent a year vs. 3.2 percent a year, respective

The most significant changes in the proposed amendment compared to the Senate bill include:

The estimates in this paper include the value of dental and vision coverage when applicable. However, due to data limitations and lack of clarity about exactly how the proposal would be implemented, the estimates do not reflect any adjustments to the thresholds based on age and gender, residence in the 17 high-cost states, or employment in a “high-risk” industry, with the exception of the construction industry, for which a higher threshold is applied.

We estimate that by 2019, 14.1 percent of workers would be in plans subject to the excise tax under the proposed amendment, compared with 23.0 percent under the Senate-passed bill. These estimates are based on the 2008 and 2009 Kaiser Family Foundation and Health Research and Education Trust Employer Health Benefits Survey (KFF/HRET; see “Methodology” at the end of this report for more information on this survey).

Adjusting for rates of unionization and rates of job-based coverage for union and non-union workers, we estimate that, in 2019, 17 percent of workers in health plans affected by the excise tax under the proposed amendment would be covered by a union contract, while 83 percent would not be. Under the Senate-passed bill, the union share of those in health plans impacted by the excise tax in 2019 would be slightly higher at 20 percent, with 80 percent of workers not in unions. Under either proposal, the overwhelming share of workers affected would not be covered by a union contract.

Our estimate for the revenue generated by the tax is lower than that of the Congressional Budget Office (CBO). We describe the reasons for this discrepancy in the Methodology section at the end of the report. 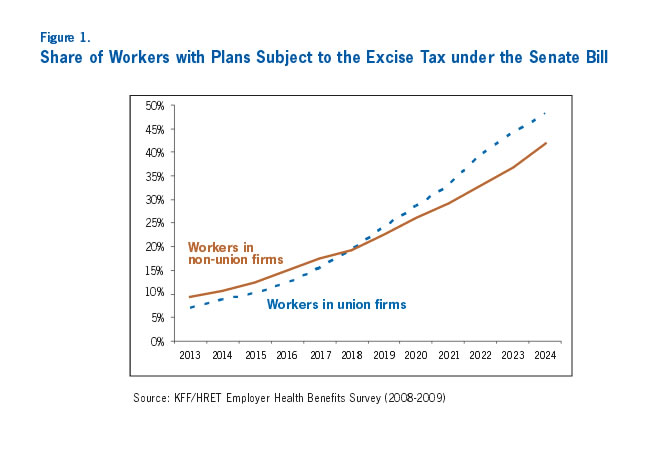 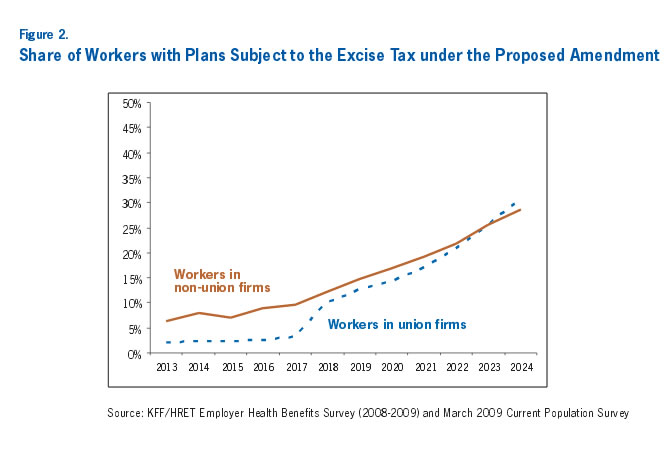 Firms Would be Affected Across Industries, but the Incidence Would Vary

The low rate of 6.9 percent of construction workers in health plans that would be affected by the tax by 2019 is largely due to the higher premium thresholds that apply to workers in high-risk industries. 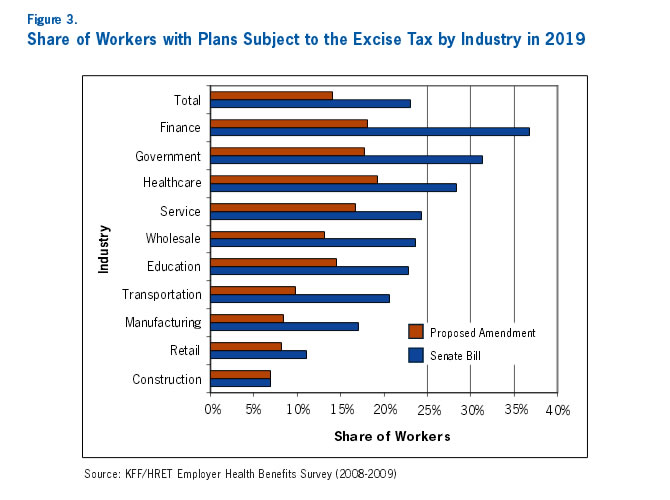 In the aggregate, the changes to the bill in the proposed amendment would benefit significantly more non-union employees than workers covered by a collective bargaining agreement. Over the first ten-year period, the share of the benefit going to union workers would exceed their share of the workforce with employer-sponsored insurance. However, non-union workers make up a much greater share of the total universe of employees who have job-based coverage. As a result, 71 percent of the total savings would accrue to workers not covered by a collective bargaining agreement.

We were not able to analyze the impact of adjusting the threshold for the tax by age and gender. The proposed amendment left discretion to the Secretary of Health and Human Services as to how to implement such an adjustment. One straightforward way to do so would be to adjust the premium threshold by the percent of people in the plan in different five-year age and sex groups. Such an adjustment would help to address unintended inequities in the tax incidence due to demographics rather than plan design. As union workers are slightly older than the average for the workforce as a whole, this would also further proportionately reduce the tax incidence on union relative to non-union workers.

The Kaiser Family Foundation and Health Research and Education Trust Employer Health Benefit Survey (KFF/HRET) contains the premium prices for the largest health plan of each firm surveyed. We use 2008 data, the most recent year that contains the breakdown of single, dual or family plans taken up by employees of the individual firms. Premiums were rolled forward to 2009 values by using the average change in premium price between the 2008 and 2009 KFF/HRET: 2.55 percent for single and dual coverage and 5.48 percent for family coverage. The KFF/HRET survey indicates whether or not employers offer dental and vision coverage, but does not contain information on premiums for these services. In order to estimate revenue from the policy as originally passed by the Senate we estimated spending on vision and dental coverage using the 2010 premiums for federal employee plans. For employees who were offered dental and vision coverage, we added a $20/$60 (single/ family) monthly premium for dental coverage and an $8/$25 (single/family) monthly premium for vision coverage.4

Using inflation rates based on Congressional Budget Office (CBO) projections, we assume premiums will increase by 6.1 percent a year and that the excise tax threshold will increase by 3.2 percent a year. This is applied to plans in 2009 to determine which plans will be subject to the tax in 2019. Thus the tax would apply to plans in 2009 that cost $5,947 or more for single coverage or $16,037 or more for family coverage.

KFF/HRET provides data on firms with at least one union contract but does not include information on the share of the workers who are covered by the contract. To estimate the share of union workers affected by the tax we assume the unionization rates of workers with job-based coverage from the Current Population Survey applies to the workers in firms in the KFF/HRET survey: 19.3 percent of workers with job-based coverage through their employer are covered by a union contract.5 Assuming health premium costs are similar for union and non-union employees in the same firm, we multiply these results by the share of workers affected by the tax: 12.6 percent for union firms, 14.9 percent for non-union firms. This gives the fraction of the workforce that is affected by the tax and which is union and non-union in 2019. The same approach for estimating the share of union workers in firms was used to calculate the amounts used in Figure 2 and Table 1.

The KFF/HRET survey only includes medical plans offered through each employer, and instructs respondents to exclude multiemployer plans administered by third parties–plans which are almost exclusively composed of workers covered by union contracts. Hence, our use of the KFF/HRET data requires two validations: first, the premium costs for union firms found in the KFF/HRET match the premium cost of multiemployer plans and second, the possible exclusion of union workers does not affect the main findings of the report. 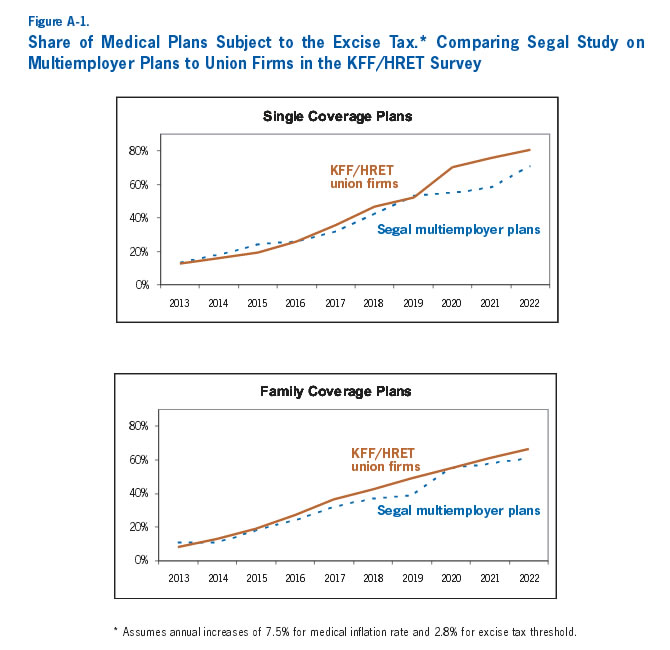 Another concern arises as firms in the KFF/HRET study are instructed to exclude employees covered under multiemployer plans from the total coverage number of the firm, which may lead to under reporting the number of workers with job-based coverage from union employers. We can correct for this by adjusting the sample weights, which represent the number of workers covered in health plans for union employers. Using the same assumption as before, that 19.3 percent of workers with employer-sponsored health insurance are covered by a union contract and that the likelihood of a plan to be affected by the tax is similar for union workers in single and multiemployer plans, we are able to replicate the analysis with the increased coverage numbers for union workers. We find this leads to additional revenue raised due to the additional employees covered through their employer, but the main results of the study still hold: about 70 percent of the savings from the proposed amendment still go to non-union workers while 30 percent go to union workers. We conclude that the main findings are robust enough to not depend on how firms surveyed in the KFF/HRET report coverage levels of employees in multiemployer plans.

Comparing Revenue Estimates To Those Projected By The Congressional Budget Office

We note that the revenues shown from the excise tax in Table 1 under the Senate-passed bill–$90 billion–are significantly lower than the $149 billion in revenue estimated by the CBO.7 This seems largely due to differences in the estimated fraction of workers affected by the tax. The CBO reports 19 percent of workers with job-based coverage affected by the Senate-passed tax in 20168 while we find this number to be 14 percent. Other estimates, such as the Joint Committee on Taxation’s (JCT) estimate of average annual excise tax revenue generated by affected workers, are approximately equal to our findings; they estimate $1,075 while we estimate $1,084.9 The CBO and JCT assume that most of the additional revenue generated would come from payroll and income taxes, rather than excise tax receipts. Our revenue estimate applies the 40 percent tax to the amount the plans exceed the threshold. For many workers, combined payroll and marginal income taxes are in the range of 40 percent, therefore we estimate that the revenue impact would be similar for workers who would otherwise be subject to the tax but receive higher wages in exchange for enrolling in lower-premium plans.

Funding for this issue brief was provided by the Institute for America’s Future and The California Endowment. We appreciate their support.