In 2016, the state of California enacted two landmark laws intended to bolster the economic security of private-sector workers in the state. SB 3 incrementally increases the statewide minimum wage to $15 in 2023, from $10 in 2016, and indexes it to inflation thereafter. This is expected to increase wages for 5.26 million workers, or 38% of California’s workforce.2 SB 1234 authorizes implementation of the California Secure Choice Retirement Savings Program (Secure Choice)—an automatic IRA that will be offered to about 7 million private-sector workers in California who are employed in businesses with five or more employees that do not sponsor their own pension or 401(k)-type plan.3 The savings program, currently under development, is intended to provide an additional layer of income to supplement Social Security for workers who are otherwise likely to reach retirement without a real nest egg. 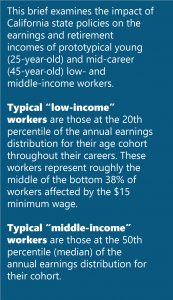 4. The California Secure Choice Retirement Savings Program has the potential to provide a sizable supplement to Social Security for both low- and middle-income workers, a large majority of whom are currently not saving for retirement.

5. Increased retirement income from the $15 minimum wage law and California Secure Choice Retirement Savings Program can be expected to lead to lower elder poverty rates over the long term than would otherwise exist. However, without additional resources, many low- and middle-income workers will still face a retirement income gap.

1. The author is grateful to Ian Perry for providing age-earnings tables from the CWED/CLRE minimum wage model that were critical to this study; Annette Bernhardt and Ken Jacobs for their advice; Steven Goss for clarifying Social Security economic assumptions early on in this project; and Dean Baker, Monique Morrissey, and Rowland Davis for their comments on the draft version of this paper. Any errors and omissions are the author’s own.

2. Michael Reich, Sylvia A. Allegretto, and Claire Montialoux, “The Effects of a $15 Minimum Wage by 2023 in California and Fresno,” CWED Policy Brief, January 2017, http://irle.berkeley.edu/files/2017/Effects-of-a-15-Minimum-Wage-in-California-and-Fresno.pdf.

6. Some middle-income workers have hourly wages at or below the minimum wage but work long hours.